The speed humps of Van Vredenburchweg

1.The main objective of the speed hump:

The point of the speed humps is to slow motorists. Pedestrians are unaffected, being on a separated walkway. Bikes are not compelled to slow down. Speed humps are usually applied to help naturally enforce 30 kph areas. Usually a series of speed humps is used, to prevent acceleration and speeding after passing over a speed hump.

2. The context of Van Vredenburchweg:

This section of Van Vredenburchweg is a side street of a busy through road, Huis de Landelaan. On either side, there is a lot of green space. This section of the street holds a number of destinations. There is a parking lot, a cafe, a recreational walking path, and residential housing on the north side. At the end of this small segment of Van Vredenburchweg, there is a side residential street, and a permeable barrier, allowing mopeds, bikes, and pedestrians to pass to a mixed use recreational road, passing by various walking paths, and a small petting zoo. On the south side of the street there is a small canal and a sidewalk. This street is also a good quiet route towards the old city center of Rijswijk for bikes and pedestrians. 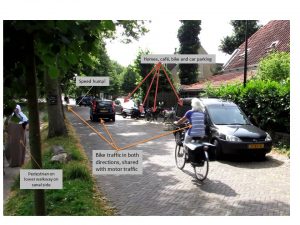 3. Treatment Performance and the Principles of Sustainable Safety

4. How the treatment is appropriate for Van Vredenburchweg

Van Vredenburchweg is a very narrow and straight local street, with no center line. People of all different modes of transportation share the road, and cross often, for the destinations mentioned above, creating potential for close encounters between bikes and pedestrians and cars. Because there is a canal and sidewalk on one side, and cafes and residences on the other, it would not be an efficient use of space to use horizontal traffic calming measures, such as chicanes or crossing islands. Rather, in order to keep the road homogenous for safety, speed humps are the best option to slow down speeds.

5. How does the speed hump function to achieve speed control

Drivers are uncomfortable going quickly over rough terrain. Bricked pavement is bumpy, and uncomfortable to drive on. But speed humps are even more unpleasant, giving the driver a lurching motion, especially at higher speeds. Drivers thus slow down to avoid the discomfort. When there is a series of speed humps, cars don’t have time to reaccelerate after a speed hump before encountering the next hump, and thus maintain a consistent slow speed throughout. Repeat rapid acceleration and deceleration are also uncomfortable for the driver.

Sharper inclines and shorter humps give a bigger jolt. Speed humps are usually around half a foot tall. Usually, the length in feet of the hump is the speed that drivers should be going over the hump. For example, 14 ft humps are intended to make drivers pass over them at around 14 mph or 22 kph. This means that in between humps, cars wouldn’t have much time to reach 30 kph before reaching another speed hump, slowing them to 22 kph. 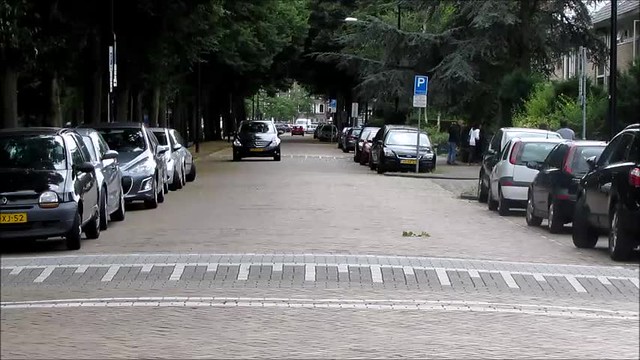