Cycle tracks are perhaps the most desirable form of bicycle infrastructure. Cycle tracks generally require the highest cost to implement and are the most permanent form of conveying bikes to their destination. Because of this they are usually the final step in a multiphase metamorphosis as cycle infrastructure grows from nothing to a full fledged network. While bike lanes are better than nothing, they can leave cyclists feeling stressed and exposed. Cycle tracks can abate their fears and encourage new cyclists. Physical separation from vehicular traffic makes cycling safer and makes riding more comfortable. The Netherlands has a well developed bicycle network and cycle tracks are very common to observe. The lessons learned from the Dutch can be applied to the United States and may help bolster their desperately needed infrastructure.

CYCLE TRACKS IN THE NETHERLANDS

So far during our time in the Netherlands we have come across many roads with different configurations of cycle tracks. Whether the road has single or multiple one-way or two-way cycle tracks there are always reasons for their placement. We were asked to examine two specific roads that once had bike lanes but have since been upgraded to cycle tracks: Delfgauwseweg and Ruys de Beerenbrouckstraat.

The first street, Delfgauwseweg, is a 1+1 lane road. It has a two-way cycle track along the southeast-bound side of the street that is separated from the travel lane by a curb and a lane of parked cars and bikes. Also on that side of the street lie all of the houses and local street connections and on the other side rests a canal.

Upon first inspection, it would seem better to place the cycle track on the canal side of the road to minimize the number of intersections that the bikes need to cross. With a closer inspection and further consideration, it appears that the main reason designers placed the track on the local road side was to save space – a crucial commodity in any road retrofit. A one-way cycle track on each side would each require at least five feet plus an additional buffer to the canal of around two feet compared to a two-way track that is in total seven or eight feet wide.

A two-way cycle track lying on the junction side of the road also has the added benefit of saving cyclists the minor hassle of crossing the road to reach the local roads that branch off of Delfgauwseweg. The low traffic local roads it crosses do not cause much of an issue for bicyclists and motorists. In addition, these crossings are raised adding extra visibility.

One end of the road terminates at a roundabout where bikes are given priority, reducing the need for the cycle track to be on a specific side. At the other terminus, the road meets the cycle track. If designers had wanted to put the cycle track along the canal they would have needed to add a place for cyclists to cross the road. This may have required a signalized crossing which would cause delays for both modes of transit.

This crossing at the end of Delfgauwseweg compounded with the lack of space prove a two-way cycle track on the residence side a viable solution. 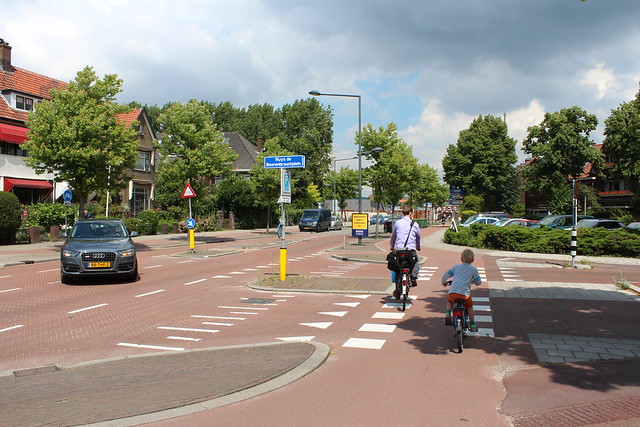 Above: A cyclist and child ride through an intersection as a turning motorist yields on Ruys de Beerenbrouckstraat.

Ruys de Beerenbrouckstraat, like Delgauswseweg, is a 1+1 lane road, but it has two one-way cycle tracks. Its categorization lies in a gray area between thru and local roads and it has an interesting and unique geometry because of the functions the road serves. While being a route into the city of Delft, it also intersects many local roads and has residences running along both sides. The cycle tracks are separated from vehicular traffic with a curb, a line of flora, and intermittent sections of road parking.

One of the main reasons designers decided to split the cycle tracks up into separate one-way lanes was to decrease the number of decisions drivers needed to make at junctions. Cutting down on the things drivers need to do is going to make it easier for them to get from point to point without any incidents. Because the main conflict points lie at intersections where the cycle tracks cross the local roads that feed Ruys de Beerenbrouckstraat, good communication between motorists and cyclists was crucial. Elevated crossings, proper signage, and attention grabbing pavement markings allow for good visibility at these points. Due to these additions, the safety at conflict points is increased and the road works for all users.

It also makes sense that they would want to convert the bike lanes to cycle tracks given the 50 km/h speed limit. There are a lot of traffic calming devices like the narrowing of roads, rough paving, and pedestrian refuges that naturally prevent cars from exceeding the speed limit.

Above: The current cross section of Commonwealth Avenue.

Boston is becoming increasingly more bike conscious as more people brave the dangerous canyons of the urban jungle. Due to the demand for safer spaces, Boston has begun to put in bike lanes. These cheap and easy solutions, while stressful and not always the safest method of conveying bikes, is absolutely better than forcing cyclists to become a part of vehicular traffic.

Massachusetts Avenue has just recently been approved to be upgraded from bike lanes to cycle tracks like the ones we have seen here in Holland. This will provide a much safer corridor for commuters to travel along. In addition to this, an important facet in developing good bicycle infrastructure is implementing a cohesive network of bicycle routes that connect people with places.

A current set of bike lanes that could soon be upgraded to cycle tracks are those that run along Commonwealth Avenue. Converting these lanes to protected tracks would increase ridership, enhance safety, and further develop Boston’s bicycle network.

Above: A proposed retrofitting of Commonwealth Avenue.

Commonwealth Avenue is a very wide avenue that is a vital chain in Boston’s Emerald Necklace. As it stands today, it has two lanes of traffic and a bike lane running in each direction as well as parked cars along each sidewalk. The middle expanse of walkway, trees, and grass is almost 100 feet wide. To enhance the bicycle network in Boston, the city should promote the current bike lanes to cycle tracks.

The current vehicle lanes are 11 feet wide which allows cars to cruise from Kenmore all the way to the Public Gardens well over the speed limit. The lanes could be reduced to 10 feet very easily, freeing up at least two feet per travel direction. The existing bike lanes are approximately 6 feet wide and with the extra two feet gained from the slimming of the travel lanes, an element that introduces vertical separation could be implemented. To provide vertical separation, knock-down bollards or planters could be an easy installation. A more permanent approach would be to move the curb out eight feet, raise the cycle track to the level of the mall, and plant some bushes or trees to isolate cyclists from traffic.

The most dangerous place for cyclists and motorists lies where the two modes of transit meet. It is imperative that intersections must be taken into account when installing cycle tracks. If any sort of vertical divider is utilized along the length of the path it should terminate (at least at eye level) upon approaching intersections. This will allow drivers and cyclists to see each other in anticipation of a junction. In addition to this, installation of bicycle signals would further enhance the safety of all travelers. Giving bikes a head start to bicyclists at intersections allows them to get ahead of cars and puts them in their line of sight. Proper design of junctures is an important facet of bicycle infrastructure and must not be overlooked.

A well protected cycle track could be implemented with curbing and proper landscaping but this alternative may be slightly pricey. This option would also be the most aesthetically pleasing and longest lasting which are good things to consider when making a decision. Another option could be to install knock down dividers or even planters, both of which are easy to put in and to take out. Perhaps the cheapest option would be to provide a median comprised solely of pavement markers. Any of these options are possible and the drawbacks of each must be fully weighed against what good they would do for Boston’s cyclists.

Implementing a strategy as outlined above could increase safety, promote ridership, decrease instances of speeding, and in general make Commonwealth Avenue more livable.