Problem Statement: “The municipality wants to make Noordeinde and Wagenstraat more attractive streets. By redesigning public space it wants to strengthen the position of pedestrians and cyclists. Shopkeepers find it important to maintain accessibility by car. What would be your advice for the redesign of public space of these streets?”

Currently, Noordeinde is approximately 34 feet (10 meters) wide, as can be seen in Figure 1 below. Noordeinde stretches 1,853 feet (565 meters) in total with the southeastern most 467 feet (143 meters) being entirely reserved for pedestrian and cycle traffic. The street is currently one way. Located on this road are a number of the Netherlands’ most high end shops and restaurants along with the Noordeinde Palace which is a staple attraction to tourists along the route. In general, this road attracts all forms of local and tourist traffic from pedestrian to car to bike with the occasion visit of the Dutch king to the Noordeinde Palace. 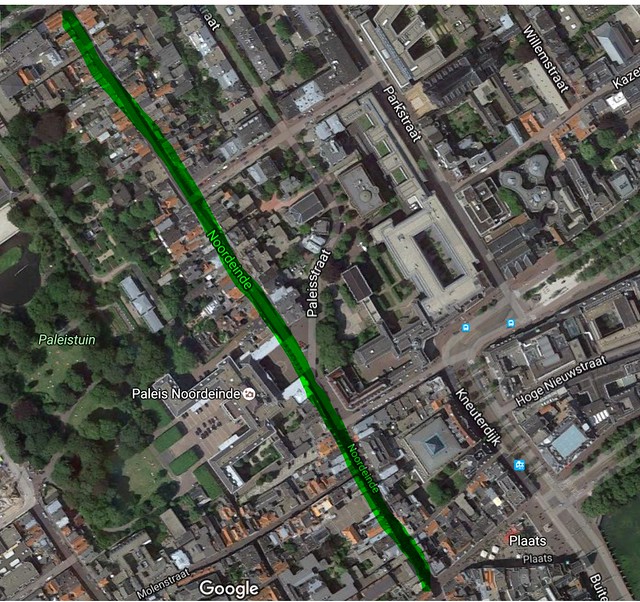 Figure 1: Overview of extents of Noordeinde.

From side to side, Noordeinde contains a sidewalk on either side of the road, a vehicle parking lane, a vehicle/bicycle shared travel lane, as well as sporadic bicycle parking and restaurant terraces along the sidewalks. In the following street view, Figure 2, of Noordeinde the tight quarters of the road can be seen as parked cars, parked bikes, riding cyclists, walking pedestrians, store front terraces, and the unseen oncoming cars all have to share the limited space in the corridor. Shops and restaurants line both sides of Noordeinde, and these shops and restaurants want their businesses to flourish from all three modes of travel, but the limited space and poor current layout do not support the window-shopper-oriented street businesses.

Figure 2: Street view of the narrow corridor of Noordeinde, note the one-way traffic. 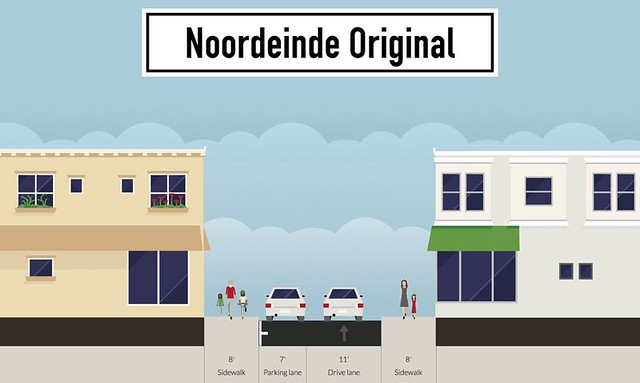 The streets in the vicinity of Noordeinde (Hogewal, Oranjestraat, Parkstraat, and Amaliastraat) contain both on-street parking and parking in bays (see Figure 4 below). 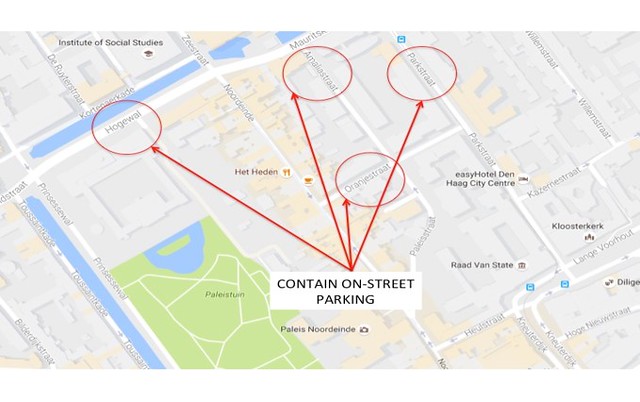 Wagenstraat is another shop oriented street that goes through the middle of Chinatown located south of Noordeinde and north of Den Haag HS Station (Figure 5). The northwestern most 200 meters (656 feet) of the 675 meter (2,213 feet) long road is entirely reserved for pedestrian and cycle traffic starting at the intersection of Wagenstraat and Gendempte Brugwal. 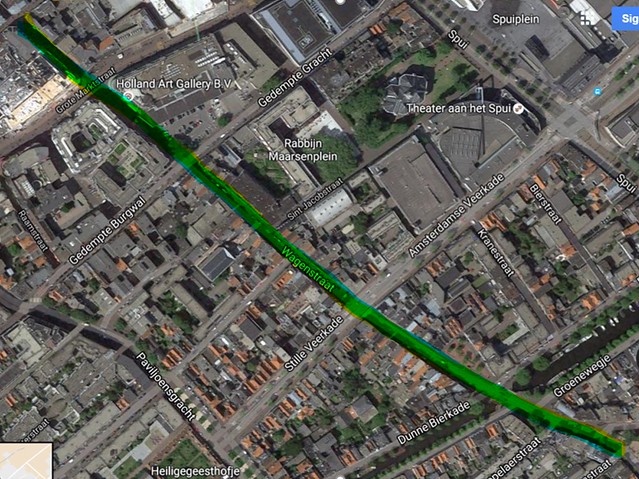 Beyond the southeastern most limits of Wagenstraat, marked by its intersection with Van Der Duynstraat, the road changes to Stationweg which connects directly to Den Haag HS Station. This direct route leads to a number of people traveling to Grote Markt and the city center using at first Stationweg and then later Wagenstraat to reach Grote Marktstraat.

Stationweg’s merging into Wagenstraat does not include a change in the number of lanes, resulting in Wagenstraat being a two lane road with sidewalks and no accommodations for bicycles. Beginning at Amsterdamse Veerkade moving northbound, Wagenstraat turns into a south bound one way road only accessible for travel at the more northern intersection with Gendempte Burgwal. Overall, this means that people moving northward from Stationweg cannot continue moving down Wagenstraat by car. All northbound traffic from Wagenstraat is then either directed to move eastbound or westbound on Amsterdamse Veerkade. Figure 6 below shows the directions and number of lanes of which cars may travel in and of locations on Wagenstraat where it is primarily pedestrian only. 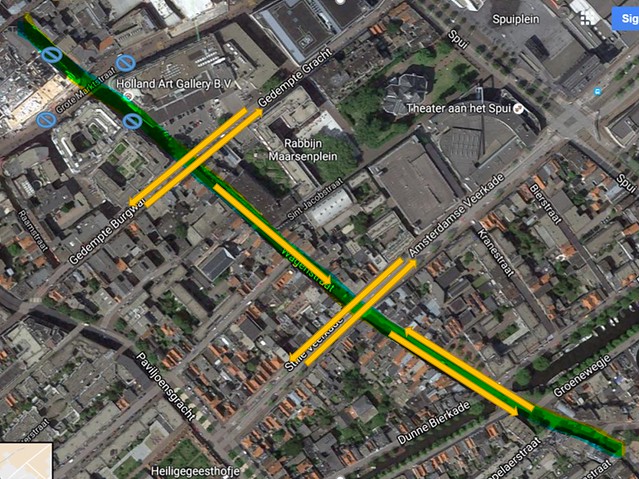 Figure 6: Arrows show directions and number of lanes of car traffic in segments. Circles show where cars are not allowed at all.

Figure 7 and 8 below show north and southbound views of Wagenstraat from Amsterdamse Veerkade where the road goes from being two lanes to one lanes of traffic after crossing the road.

Throughout the 476 meters (1557 feet) of Wagenstraat that allows motorists, parking is allowed even in locations where there are no lanes or bay for parking. In these locations, short term accommodations have been made so that cars may park on the already narrow sidewalk. This occurs primarily in the one way segment (Figure 9). In the two way segment, there is a designated parking lane that motorists may use (Figure 10).

Figure 9: Parking on one way segment of Wagenstraat. Lane is somewhat designated but still cuts into sidewalk.

Figure 10: Parking lane on west side of Wagenstraat. 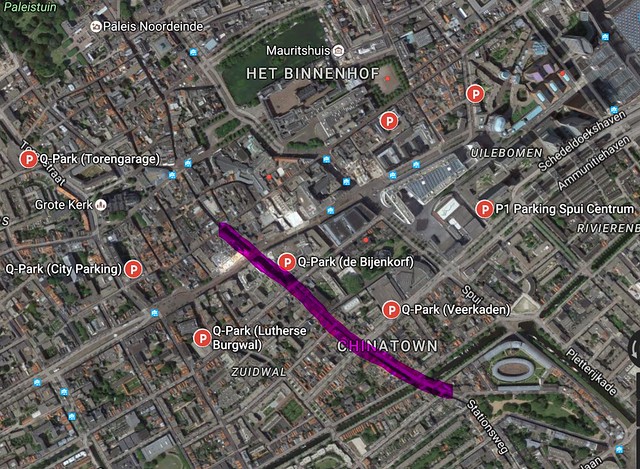 Overall, with the streets lined with restaurants and shops, Wagenstraat does not accommodate to local pedestrians or cyclists on the busy, narrow street littered with parking and moving cars.

Currently, shopkeepers do not want to remove the presence of vehicles travelling on Noordeinde, meaning that new designs must accommodate vehicular traffic. However, because the surrounding streets contain parking, the corridor can exist without on-street vehicle parking, and drivers wanting to shop on Noordeinde can park on the existing, surrounding streets, such as Hogewal, Oranjestraat, Parkstraat, and Amaliastraat (see Figure 4). In result, the best solution to allow cars to still travel on Noordeinde while giving priority to cyclists and pedestrians is to turn Noordeinde in to a fietsstraat, or bicycle street. In this case, this would allow drivers to be guest on Noordeinde and to continue using it as a through-street where they will still be exposed to the shops and attractions of the road. By doing this, this makes the street more attractive for pedestrians, cyclists, and store/restaurant owners alike. In addition, store/restaurant owners would have more terrace space to extend their businesses onto the sidewalk and into view of locals and tourists passing by. 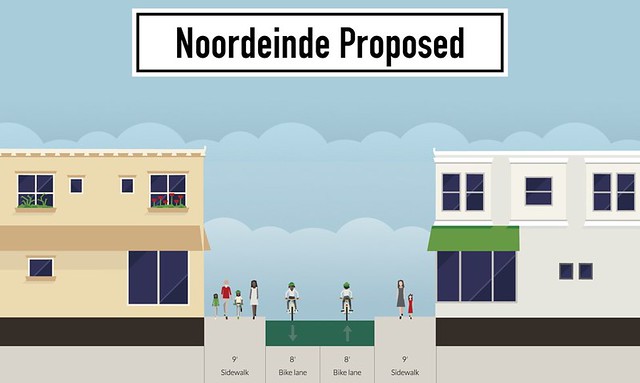 To be noted, the above streetmix view (Figure 12) of the proposed design of Noordeinde, featuring wider sidewalks and a fietsstraat, does not show that the bike lanes above are truly fietsstraat. In reality, the “bike lanes” are general travel lanes where bike have priority and where cars act as guests. These changes would be marked with an extension of the existing sidewalk and a repaving of the travel lane with red asphalt. Through the expanse of the street, speed humps and chicanes would be implemented to guarantee that motor vehicles obey the 30 km/hr speed limit.

Removing the parking entirely from the street and directing it to others nearby is not a long term solution. Due to the fact that there are residents living above some of the shops and restaurants and that there is always a steady crowd of cars parked on Noordeinde, in the future it is advised that automatic underground parking be implemented on the street. Because of the nature of the road and its reputation of being one of the most expensive shopping streets in all of the Hague, the cost of the underground parking would be taken care of by a high cost to park in it, a fee that the wealthy people attracted to the street would be willing to pay.

By granting priority to cyclists on the street by turning the road into a fietsstraat, the design is practicing one of the key sustainable safety factors, homogeneity, by continuing the pedestrian oriented roads as seen on the first portion of Noordeinde. With the removal of on-street vehicle parking and the allocation of this additional space for cyclists and pedestrians, Noordeinde will be a more attractive street for all shoppers who want to shop in a low-stress environment that is aimed towards window shopping and street browsing.

Just as on Noordeinde as on Wagenstraat, store owners located on this stretch of road do not want motor traffic to be completely cut off from having access to their stores through this route. Because of this, the same treatment as described for Noordeinde would be implemented on Wagenstraat as well. Because Wagenstraat has two variations of current layouts, the removal of traffic on the one way lane would turn the segment into a fietsstraat while removing parking from the two lane segment would free up enough space to create a two way cycle track on one side of the road. Below are the two original and proposed layouts of the redesign. 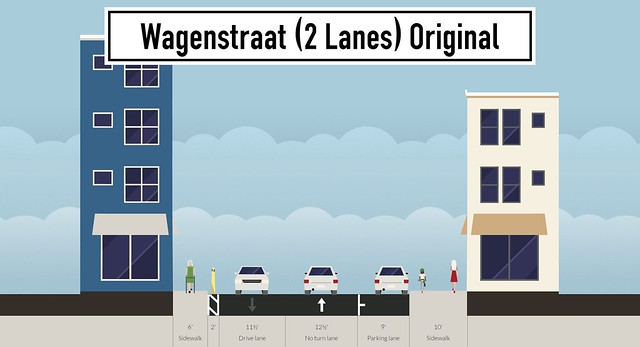 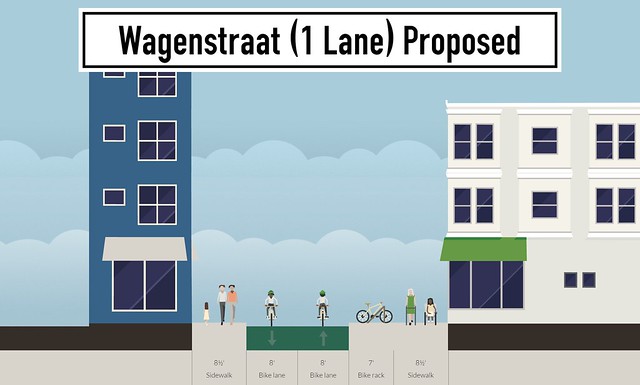 Figures 13 and 14: Side by side views of original and proposed designs of the two lane portion of Wagenstraat. 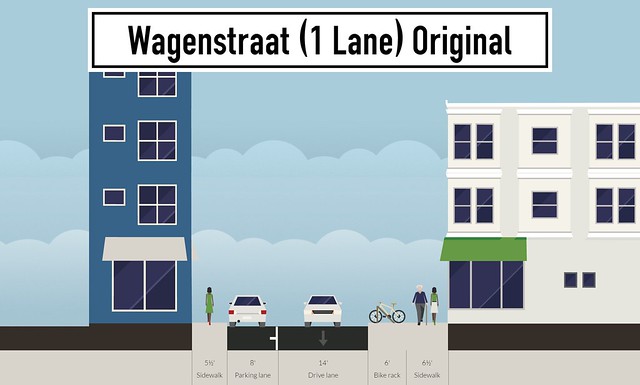 Figures 15 and 16: Comparisons of the original and proposed designs of the single lane potion of Wagenstraat.

In the single lane, one way portion of Wagenstraat, the original features a parking lane while the proposed increases sidewalk space while narrowing the lane and it into a fietsstraat. The bike lanes going in both directions on the below Figure 16 represents a fietsstraat.

As with Noordeinde, the complete removal and redirection of traffic on Wagenstraat is not a long term solution and in time underground parking should be added, the entrance being around Amsterdamse Veerkade possibly, to accommodate the parking necessities of the road.

To reiterate the characteristic of homogeneity as made important by systematic safety, the new designs of Wagenstraat promote similarity through the road, connecting streets in a cohesive bicycle network, overall allowing people to navigate their city in a sustainable and efficient manner.