In terms of safety, the bike lanes provide cyclists their own lane and discourage, using dashed lines and red paint, drivers from intruding into their space. Riding on a bike lane can be stressful at times, especially when there’s parking on your right and fast driving vehicles on your left. Bike lanes must cater for a cyclist’s space needs and when alongside parking, the door reach of the parked car to avoid “dooring”.  Bike lanes aren’t expensive to build and are a good option if there’s no parking and only one travel lane parallel. 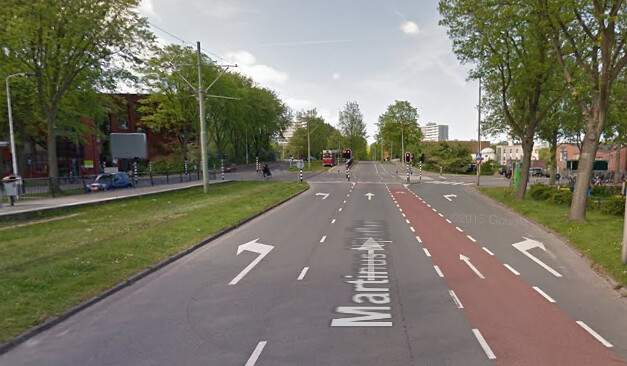 Martinus Nijhoflaan, pictured above, has a bike lane that’s pocketed between the through and right-turn lanes. To avoid cyclists being “right-hooked” by turning vehicles, the right-turn lane starts abruptly and cyclists keep their right of way, meaning vehicles weave into the bike lane to turn, being fully aware of cyclists on that lane. 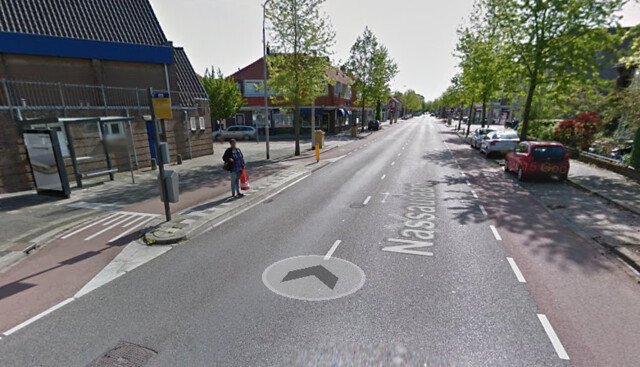 Nassaulaan, pictured above, has a bike lane that’s alongside parking. Also, being alongside a bus route, the bike lane bypasses the bus stops to avoid the possibility of buses blocking the lane and conflicting with cyclists. 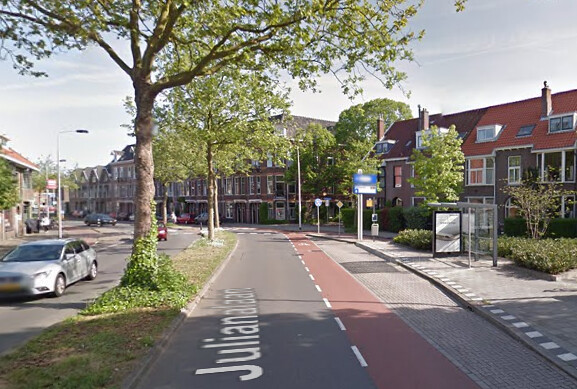 The bike lane on Julianalaan, however, continues straight past the bus stop. Enough space is provided in the bus stop bay (10 ft) so the bike lane isn’t blocked and bus drivers must be alert to any cyclists on the lane before stopping. 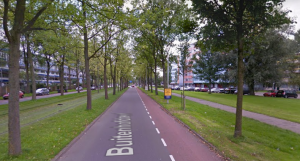 The bike lane on Buitenhofdreef was the least stressful to ride on due to the lack of parking.

Cyclists are required to share the road with cars on bike boulevards, meaning they’re only safe if the cars are low in volume, traffic calmed and sharing the road with other cars (no lanes/centerline). Riding on bike boulevards wasn’t stressful, whenever cars showed up, they were driving slowly and were alert to your presence on the road. Bike Boulevards may be the cheapest option if planned correctly, creating a network of local streets that are bicycle friendly (minimum stops). 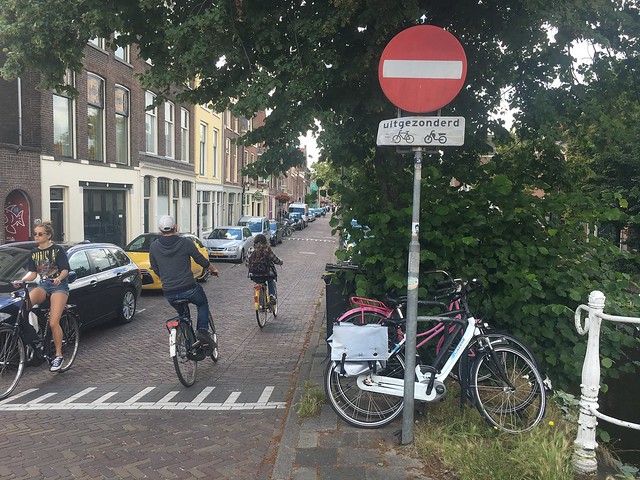 The Buitenwatersloot bike boulevard, showed above, is a great example, it’s one-way for cars, limiting the volume of cars, and two-way for bicycles. The road is traffic calmed with speed humps and parked cars on both sides. Also, the change in brick pavement pattern on the road subtly suggests a contraflow lane on the right of the road. Riding contraflow to parked cars (“dooring” not as dangerous) and slow cars, alongside a canal, was very pleasant.

Cycle tracks provide the most safety to cyclists, with vertical and horizontal measures, the cyclists are separated from all other users (cars, transit, pedestrians). Cycle tracks are the norm in the Netherlands if there are more than one through travel lanes and/or high turnover parking. Riding on cycle tracks is not stressful as you’re surrounded by cyclists going the same speed (although the occasional moped may disrupt that). They’re usually an expensive option as they take up a lot of space and require more than just paint on the roads. If space is limited, two-way cycle tracks can be used instead of two one-way cycle tracks. 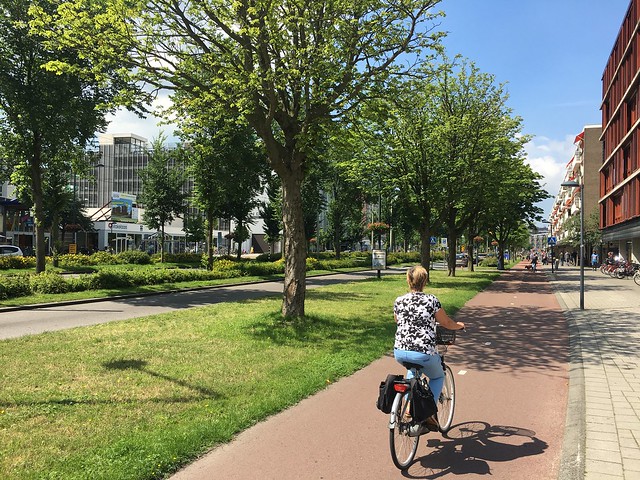 Papsouwselaan, pictured above, has two-way cycle tracks on both sides of the street due to its commercial nature, allowing cyclists access to the shops on both sides; it is protected from vehicles by a large grass median and trees. The cycle track then leads to a roundabout and continues keeping the cyclists protected, cyclists only have to yield to trams whenever they pass through the roundabout. 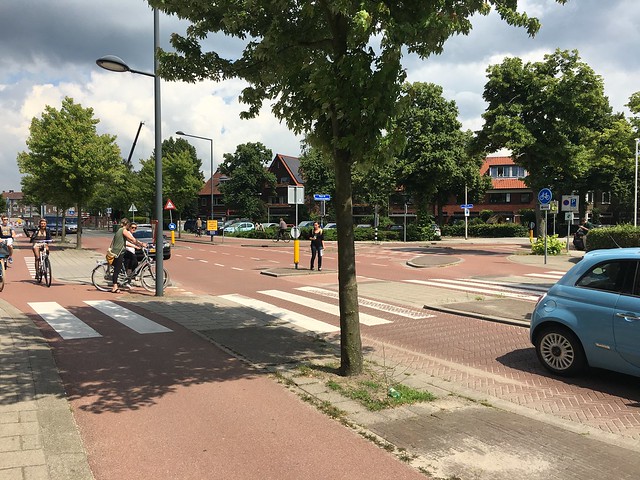 The one-way cycle track along Ruys de Beerenbrouckstraat, pitured above, leads to an un-signalized protected intersection that integrates the track beautifully. Cars move slowly through the intersection due to the traffic calming measures put in place, pedestrians are provided refuge islands to cross one lane at a time and cyclists on the track aren’t exposed to turning vehicles as they’re protected by a corner island. That corner island also slows turning vehicles down and makes drivers face any cyclists/pedestrians wanting to cross the street they’re turning onto. A close up photo of the intersection is shown below. 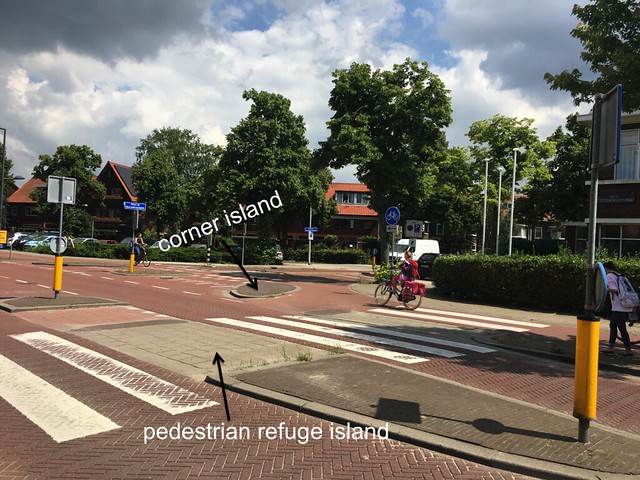 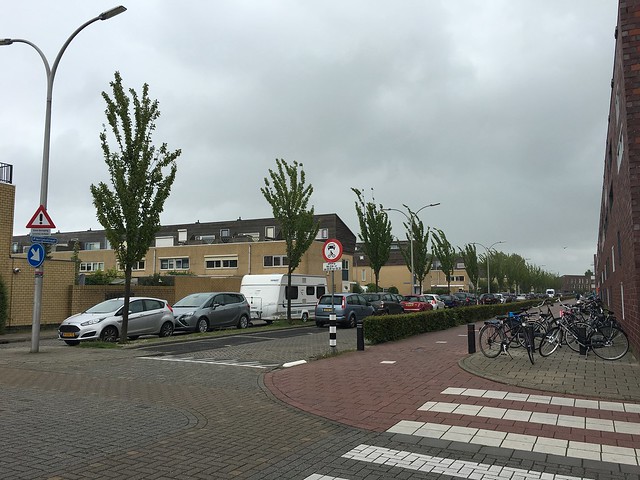 Because 49% of Dutch children travel to their primary schools on bike and 37% walk, it’s crucial that roads leading to schools are safe for these users. In the picture above, a two-way cycle track is shown, alongside a local road that’s restricted to motor vehicles from 8 to 8:30 AM (to limit congestion near the school). The local road alone would’ve been safe for cycling, but as an extra precaution, a cycle track was built. Cars are parked away from the school and a hedge was planted to protect the cycle track users from falling onto the road.

Advisory lanes can be considered a safe option if space is limited, they provide a lane for cyclists to use but they run alongside narrow two-way driving zones, meaning cars must encroach onto the advisory lanes when another car approaches; this only works if traffic is low in volume. Riding on the advisory lanes wasn’t as stressful as one would imagine, the drivers understand the system and were able to accommodate the bicycles on the roads without an issue. These advisory lanes may require more paint than putting sharrows on the roads for example, but cyclists will certainly notice the difference. 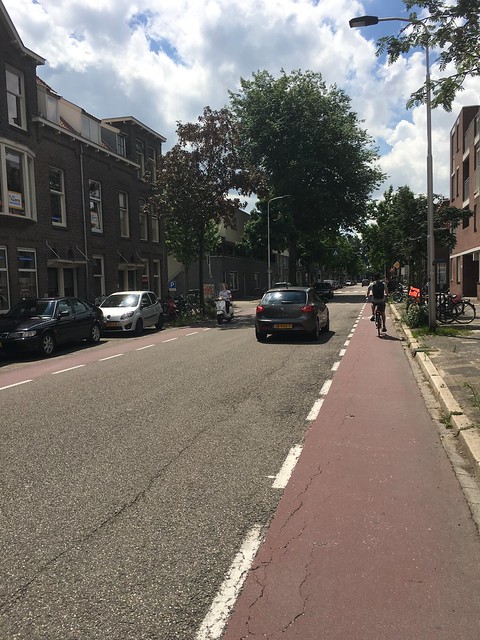 The advisory lanes on Hugo de Grootstraat, pictured above, run alongside a driving space that’s wide enough at times for two small vehicles to pass each other without them moving into the cyclists way, but even so, cars drive in the middle of the road, giving cyclists their space. 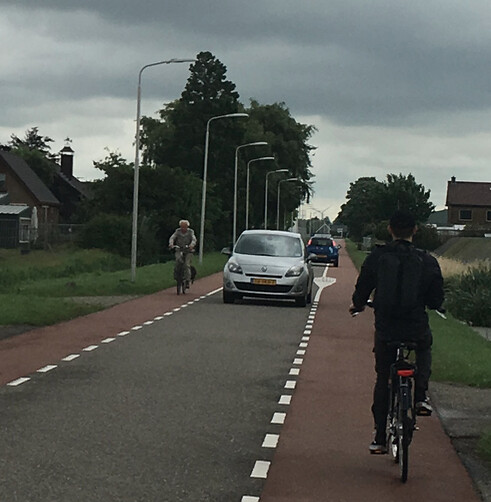 The rural advisory lanes on Schimmelpenninck van der, pictured above, run alongside a narrow driving zone where two small cars must encroach onto the advisory lanes to pass each other. White humps on the advisory lanes act as a deterrent for cars, keeping them away from the sides and to the center of the road when no cars are ahead. In the photo above, we see the silver car following the concept and the blue car driving on the advisory lane for no reason (to be fair, it was a driving instruction car).

Service roads run alongside main roads and provide access to properties,  they don’t require building any kind of bicycle infrastructure to be safe for cyclists. Service roads are usually low in traffic volumes, are traffic calmed (no centerline, speed humps, chicanes, curves, unique pavement material) and have low turnover parking; which makes them ideally safe for a shared cycling experience. 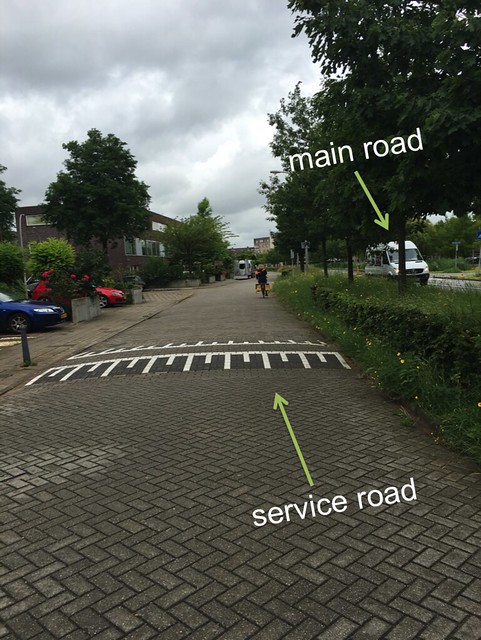 The two-way service road pictured above ran alongside a main road, it was separated from vehicles on the main road by a grass median and the road itself was traffic calmed with speed humps. To stop through car traffic from driving on the service roads, they’re designed so that they lead no where. For bikes on the other hand, they’re connected using cycle tracks, the one we rode on had a cycle track on a bridge that crossed a canal (pictured below). 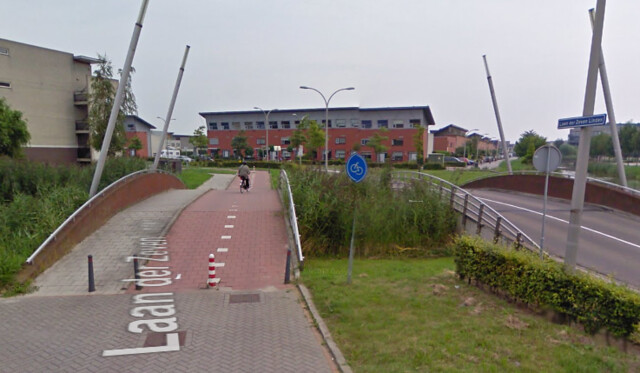 Bike highways are a network of bike paths that enable cyclists to travel from city to city; in addition to vertical/horizontal separation from vehicles, they include grade separation from other users, the highway we rode on for example, had an underpass (shown below) that allowed cyclists to ride under a busy highway. Riding on the highway was very low stress and involved a minimum amount of stops allowing us to ride faster than usual. Building these superhighways will obviously cost the most money compared to all the other options, but it will take people out of their car commutes on the highway and put them on a saddle to work/school instead. 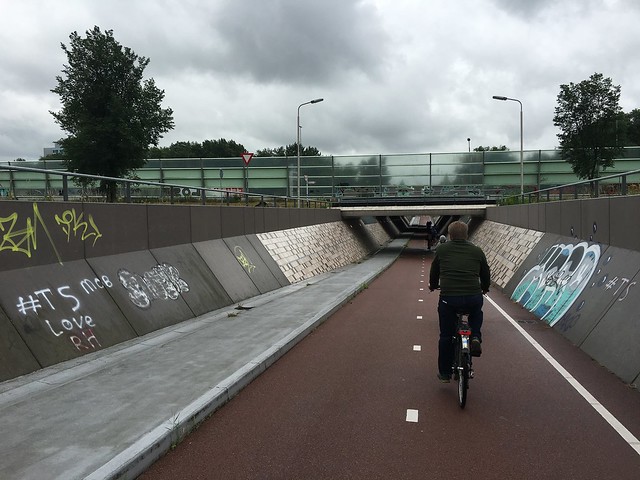 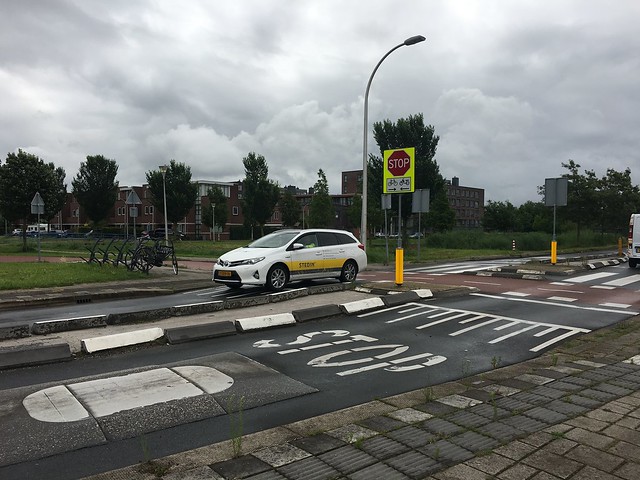 The picture above, shows the N470 bike highway crossing a main collector road, where there’s a slight grade change (bike highway on a raised crossing), cars also have to go through a multitude of traffic calming measures (speed cushion, narrowing road, stop signs) to yield to the cyclists on the highway, indicating their importance and right of way.

*These locations were not visited by my group.

All bike lane photos are screenshots from Google Street View.