In my first assignment on my Northeastern University 2016 Summer 2 Dialogue of Civilizations trip to Delft, Netherlands, I analyzed some of the local bicycling facilities. Our group of students toured 11 of 14 sites labeled by Professor Furth. These sites, showed examples of several bike lanes, a bike boulevard, cycle tracks, advisory lanes, and a separated bike path. We were supposed to visit a service road but did not have time.

Examples of bike lanes can be seen at Sites 1, 2, and 4. Bike lanes are a cheap and minimalistic way of providing bike space on the road. Although not as safe and effective as other forms of bike infrastructure, they are legally acceptable. A negative aspect about bike lanes is the cyclist, riding along right next to the cars, feels “friction” from the fast-moving cars. It is less relaxing for the cyclists as they feel they must ride faster. In addition, the cyclist is in danger of getting doored by the parked cars on their right. This always-present danger causes the cyclist to ride further to the left of the bike lane, increasing the likelihood of getting sideswiped or increasing their speed up to an uncomfortable level. 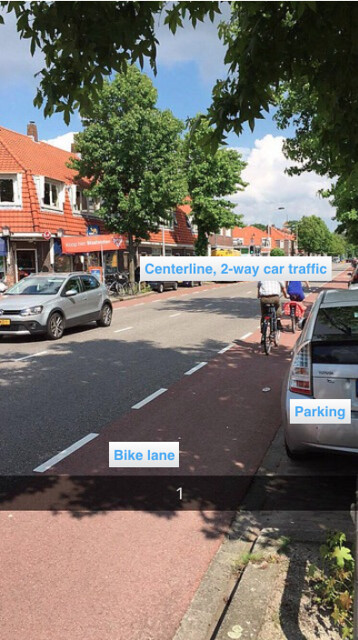 Site 1, Nassaulaan, depicts the two-way automobile traffic separated by a centerline, and the cyclists using their lane placed between the car traffic and the parked cars. While I was riding, I felt myself constantly peering through the drivers’ windows to see if anyone was exiting their vehicles. I was mostly focused on a potential dooring and was not relaxed. This road has parking on either side which takes away from the available space for transportation. I think that removing one of the sides of parking would be beneficial. This road’s bike lanes are an inexpensive measure that meets a legal standard, however, a cycle track would be safer. 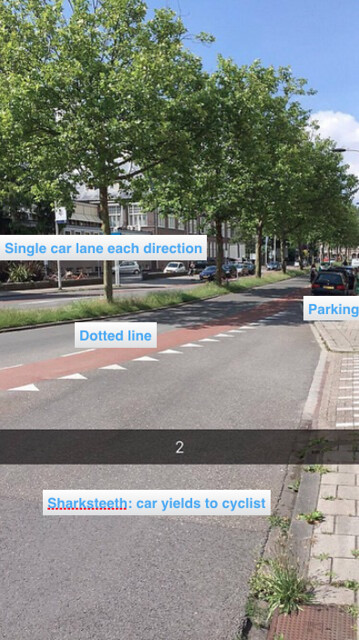 Site 2, Julianalaan, has these bike lanes but on one-way, single car lanes. I thought this was slightly more stressful than Site 1. On one hand,  the one-way, single car lane naturally slows down automobiles which, in theory, makes it safer. However, with the two lane scenario, a car passing you can slightly encroach into the oncoming traffic’s lane as long as another car is not present. At Site 2, this was not an option. Visually, this road is more pleasant than Site 1, due to the tree-lined median separating directional traffic. I am unfamiliar with the typical widths and standards of medians but I would suggest considering a thinner median to provide more space. This road’s bike lanes are an inexpensive measure that meets a legal standard, however, a cycle track would be safer. 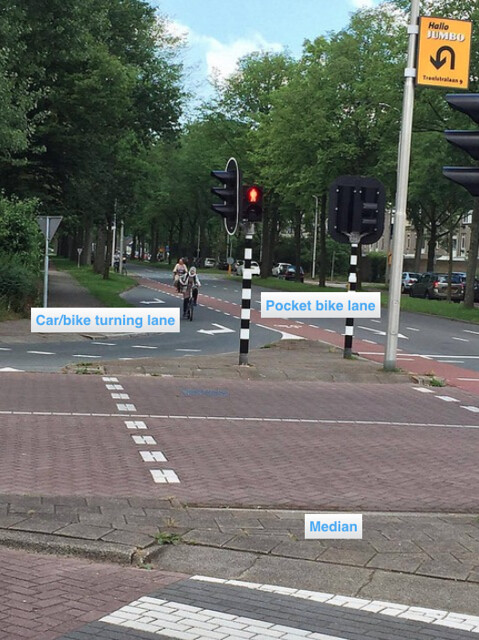 Site 4, Buitenhofdreef, shows an example of a pocket bike lane. I enjoyed riding this facility. This prevents the cyclist from getting cut off by a car taking a right-hand turn. I imagine the shared turning lane can lead to some conflict between cars and bicycles, but a car was not present when I turned. The bike lane is a cheap method of providing a cyclist their own space, however, it is not ideal. A separated bike path, and protected intersection, would be more pleasant and safer.

Site 7, Buitenwatersloot, is a bike boulevard. Automobile traffic is diverted away from these roads, decreasing the number of cars which increases the safety of the bicycle rider. There is also ample bike parking on the side of the road. I felt incredibly safe riding on Buitenwatersloot. I could look around at the canal, architecture, and shops comfortably. When the cars do arrive, they are traveling slow due to the narrow lanes, and bike-first mentality. This option seems like it can be expensive. I think it is well worth the investment to create “people spaces” and pleasant city centers. However, the diverted roadways can put added stress on other roadways, which could lead to higher costs of road construction and maintenance elsewhere. 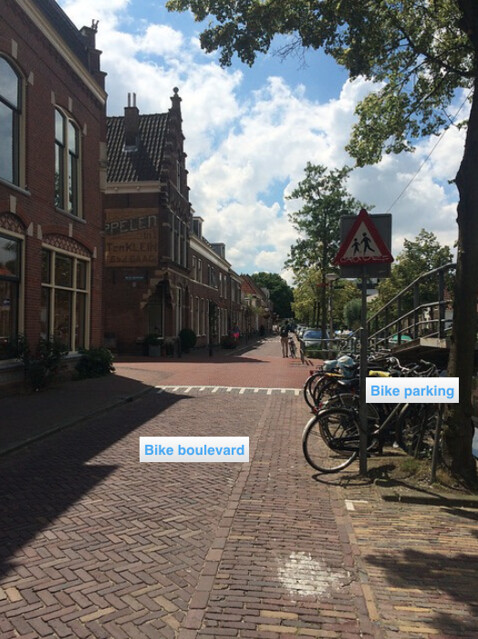 Examples of cycle tracks can be seen at Sites 5, 6, and 10. Cycle tracks are separated from the automobile traffic road either by parked cars, medians, or vertical separation (a raised path). This provides the cyclist with peace of mind that an automobile will not invade their space or jeopardize their safety. 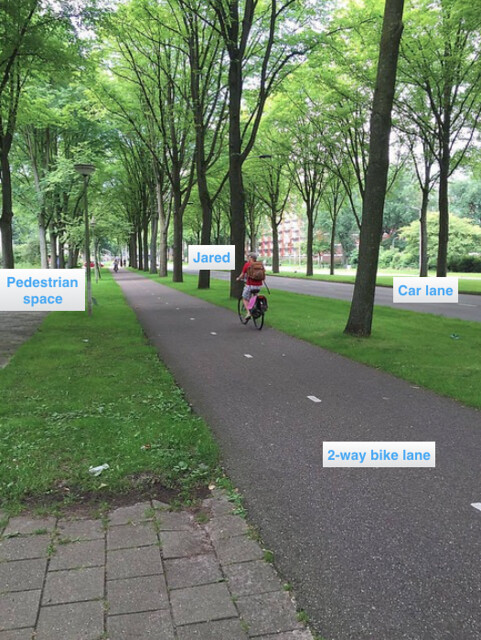 Site 5, Voorhofdeef, was a pleasant parkway. I was very relaxed while riding it. It included a two-way cycle track which was separated from the automobile traffic by a wide, grassy median. This was made possible by having ample space in the area. This bike facility is expensive, however, achieves its purpose of being a calm, peaceful, path for cyclists to use. 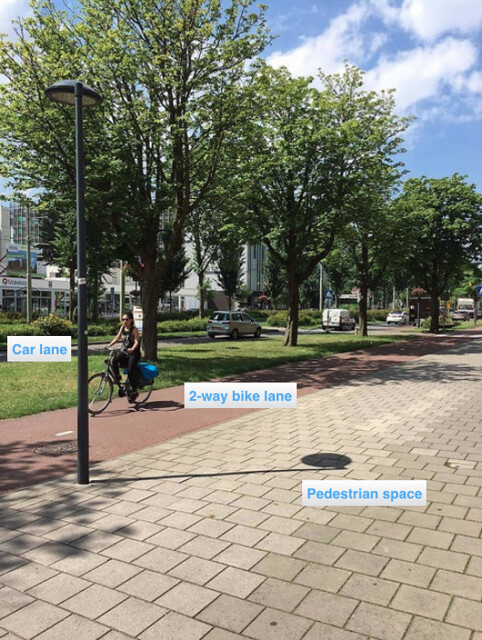 Site 6, Papsouwselaan, is a very wide shopping road that I enjoyed exploring. It has ample pedestrian space, cycle tracks, and one-way, single lane car lanes. The single lane car lanes are easier to cross than multi-lanes, and it naturally slows down traffic, making it safer. This roadway originally did not have two-way traffic which was inconvenient for shoppers visiting the shops. This project which also included downsizing the number of cars lanes, was expensive; however, the road is now much more aesthetically pleasing, safe, and convenient. 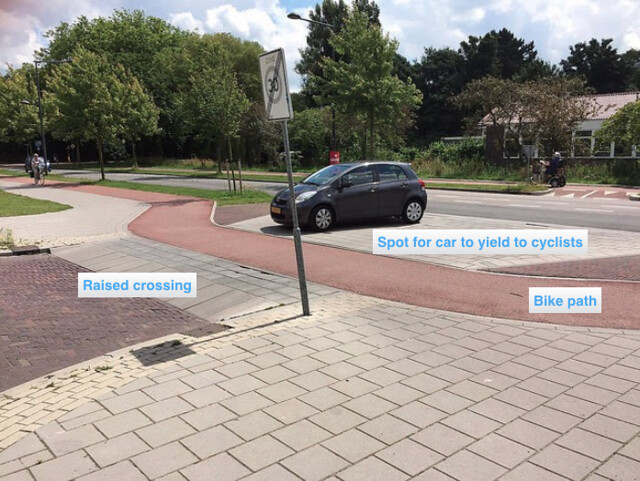 Site 10, Ruys de Beerenbrouckstraat, shows a cycle track at the entrance/exit of an Albert Heijns. The cycle track is indented at the entrance/exit to allow space for an entering car to yield to cyclists in the cycle track, while not blocking traffic in the car lane. This allows for smoother traffic flow. The car driver also has a better visual of the cyclists in this scenario, increasing safety. While I was riding, I felt confident that the cars entering into Albert Heijns saw me and could have yielded properly if I was closer to their vehicle.  This technique is inexpensive to include in an already-planned cycle track, and is very effective in achieving its purposes mentioned above. 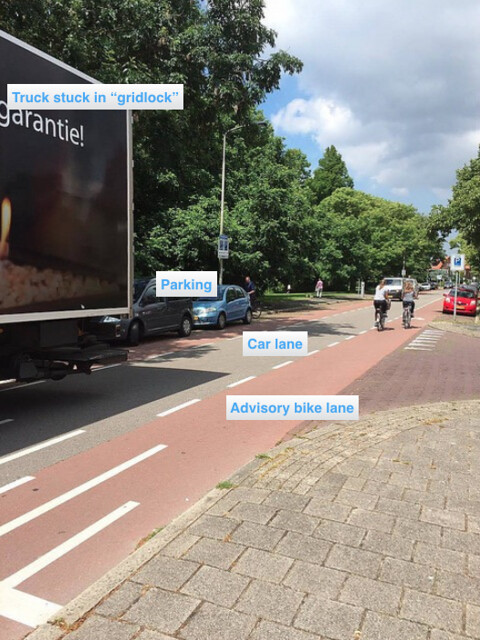 Site 8, Hugo de Grootstraat, is said to also justifiably represent site 9, Adriaan Pauwstraat, which is the same type of road, except more narrow. This photograph of site 8 shows a truck stopped in “gridlock”. This is a downside of roads with advisory lanes and shows their weakness, their narrow width. During this gridlock situation, there was a large cargo truck going in one direction, and cars and bikes coming in the other direction. This caused a little bit of a pile up, because every person wanted a piece of the road. This road did not seem safe during this time. However, when the traffic was not congested, it felt safe. There is a possibility for dooring when driving on the right-hand side of the road, which presents some danger. However, the low turnover of these parked cars helps to minimize this risk. These advisory lanes are an inexpensive way to turn roads with low traffic into bike-friendly routes. 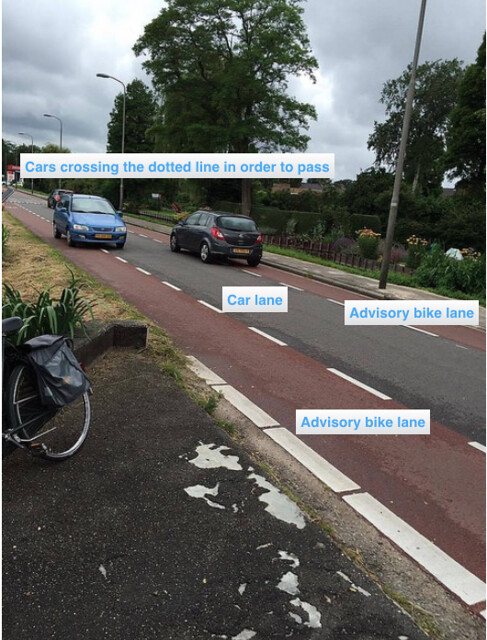 Site 11, Molenwag, shows two cars using some of the space of the advisory lanes to pass one another safely. Again, these advisory lanes are an inexpensive way to serve the bicyclists needs. I felt completely safe on this road and could take in the views. Since there is no street parking here, I felt safer riding it than sites 8 and 9.

An example of a separated bike path that we toured was Site 14, the N470 bike highway. It gives complete priority to the cyclist. It is separate from any motor vehicles. This provides the cyclist with somewhat of a “flow road” of their own, while maximizing safety. This form of road may be seen as expensive because it is designed for only one mode of transport. I felt safe riding this route. We did not stop for pictures because we were all hungry.

Image from Google Maps of N470: 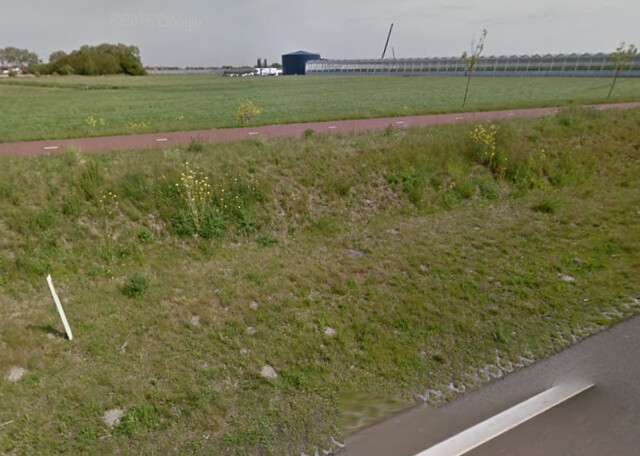 We did not visit any service roads, however, they are used to increase safety and ease traffic congestion caused by high turnover parking spots. A service road is a road that runs parallel to a main travel road that has parking spots or entrances to residential neighborhoods off of it. Bicyclists use these service roads instead of the main travel roads designed for cars. This is safer because the cars are moving slower. This could potentially be a relatively inexpensive method if included in an original design, but retrofits and additions could get pricy.

Image from Google Maps of Zuidpoldersingel, a service road: 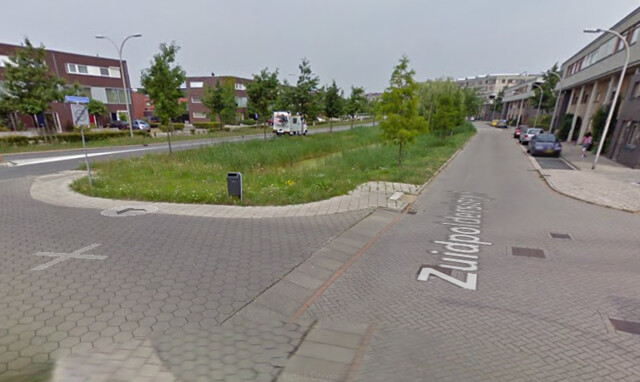