There are many different ways to deal with managing cyclists and vehicles on a road depending on the road width and traffic volume currently existing. Advisory bike lanes are one such method of providing cyclists with a space while balancing space and traffic volume. The Dutch call them “suggestion lanes” as they are not dedicated spaces just for bicycles however they are still better than just painting sharrows on the ground. Advisory bike lanes give cyclists and drivers an indication that bicyclists have a space on the road. This is done with both the dashed lane markings and the red pavement used by cycle tracks. The dashed line also serves to indicate to drivers that since the center travel lane is narrow, if there is an oncoming car, they may intrude upon the advisory bike lane in order to make enough room for both cars to pass. This intrusion is to be as quick as possible and after passing, the car must go back into the confines of its travel lane. This allows for narrower vehicle travel lanes and narrower lanes mean slower moving traffic.

Advisory lanes in Delft are helpful because they give cyclists a designated space on busy narrow roads while also allowing traffic to travel and pass each other if needed. Ideally the average daily traffic will be within 2000 to 5000 vehicles. An example of a street with advisory lanes is Hugo de Grootstraat, Delft. This street is located in a residential neighborhood but it acts as a sort of collector for the side streets connected to it. Hugo de Grootstraat is an approximately 55 feet wide road with sidewalks, parking lanes, advisory bike lanes, and a two-way center travel lane as depicted in the attached photo. The way the road works is that cars can travel in each direction down the center unmarked roadway. If two cars traveling in opposite directions come upon one another they may intrude upon the advisory bike lanes for more room if it is needed to pass the other car. However, normally there is enough room for vehicles to travel down the road and they will not need to intrude into the bike lanes. The unmarked center lane also works to make drivers cautious while driving down the road because they are not the only vehicle in the lane and may need to yield or intrude into the advisory lane at any time. While not as safe as a separated cycle track, this facility still allows cyclists a convenient area to ride and can be relatively cheaply implemented. It is worth mentioning that even though cars may intrude upon the advisory lanes, cyclists still feel like they have priority as cars are the ones that have to move out of their lanes and watch out for bicyclists while doing so.

Bicycling on the advisory bike lanes on Molenweg and Kerkweg in Nootdorp, South Holland were two very different experiences, as Molenweg has a significantly higher volume of traffic than Kerkweg. While the exact values for the average daily traffic of both roadways are unknown, Molenweg is more of an arterial roadway connecting Nootdorp to Delft in the west direction, while Kerkweg was a local roadway. This was evident in the fact that several trucks were observed on Molenweg over the course of about fifteen minutes, while none were observed on Kerkweg during this time. Figure 2 below shows vehicle behavior on Molenweg when a truck and a vehicle going in opposite directions pass one another. Each vehicle pulls to its own respective side of the road in order to accommodate one another. The key thing to note from this observation was that if two vehicles encounter one another and there are also cyclists in the advisory lanes, there will not be enough room for all to be sharing the exact same cross section of roadway. Either the cyclists or the vehicles would need to be in front of one another, but this would not be difficult as they all should be traveling at roughly the same speed regardless. Therefore, traffic calming tools such as speed humps and varying types of pavement are necessary (Figure 3). Both roads also intersect with one another, which makes the intersection difficult for vehicles and cyclists to comprehend as the right of way in unclear. Observing the Dutch use of the advisory bike lanes in this area made me question whether or not this treatment was suitable for arterial roadways with a certain ADT, as well as roadways with frequent intersections. Due to the nature of advisory bike lanes, most roadway users do not actually understand that these lanes are merely “suggestions” as opposed to actual bike lanes. For local roads, this works well as every vehicle observed yielded to the bicycles and overtook the lane on the other side of the roadway instead of traveling in the middle. At intersections, however, some sort of system is needed to designate who has to yield and who has the right of way. This could be decided by giving the right of way to the roadway with the larger ADT and alerting traffic in the cross street that they need to yield by using shark’s teeth. 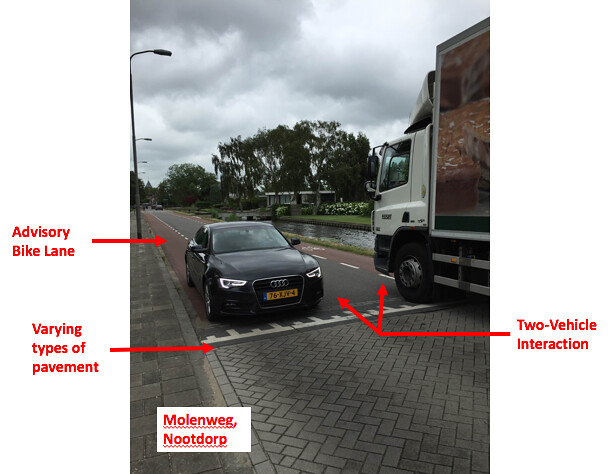 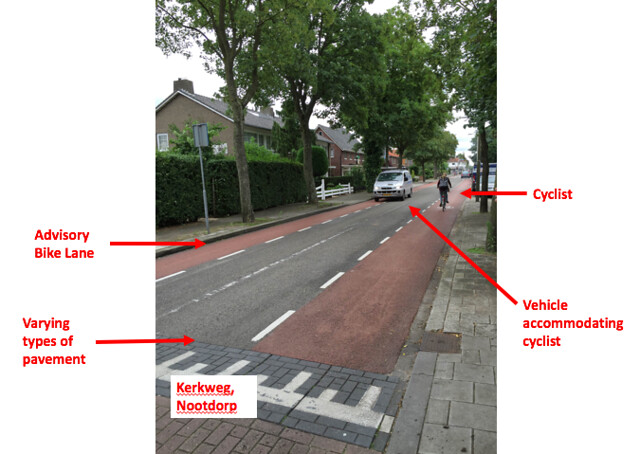 In Boston, Jersey Street from Boylston Street to Park Drive would be a good candidate for advisory bicycle lanes. Currently, Jersey Street is a 33 feet wide two-way unmarked local road with parking lanes on either side of the road. Currently there are no bicycle facilities present on this street. This is a local street with apartment buildings on either side and mainly services local traffic. Figure 4a depicts the area around Jersey Street and Figure 4b depicts the existing conditions on the street. Advisory bike lanes on either side of the vehicle travel lane could be implemented effectively to improve safety and convenience for bicyclists who need to travel down this road. This would allow cyclists to travel north toward Boyston Street which is a main artery for reaching Downtown Boston or south which leads to the Fens and the Northeastern University campus. The current 7 feet parking lanes on either side of the street could be retained with 4.5 feet advisory lanes added to either side of the vehicle travel lane which would be narrowed down to 10 feet. Traffic is low on this street so one vehicle travel lane should be able to accommodate its traffic volume. The 10 feet width of the travel lane also has the benefit of naturally slowing vehicles down as drivers will need to be more cautious. Additional Dutch traffic calming techniques could also be implemented like speed humps or raised crosswalks in order to further reinforce the slowing of drivers down this street. If two cars travelling in opposite directions meet, then one car can intrude on the advisory lane, as it is supposed to, in order to continue down the street.  The treatment at Jersey Street could be similar to Hugo de Grootstraat with parking lanes, advisory bike lanes, and a center roadway. As a result, I would recommend that advisory bike lanes be installed on Jersey Street. 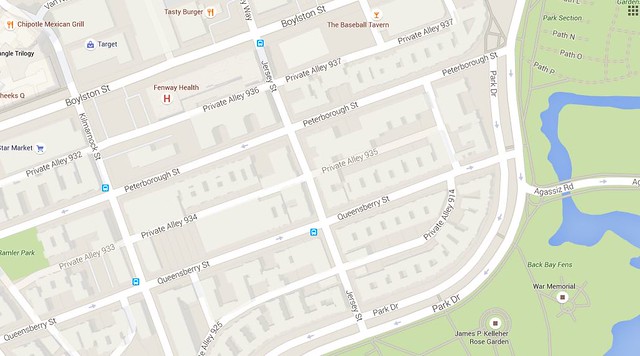 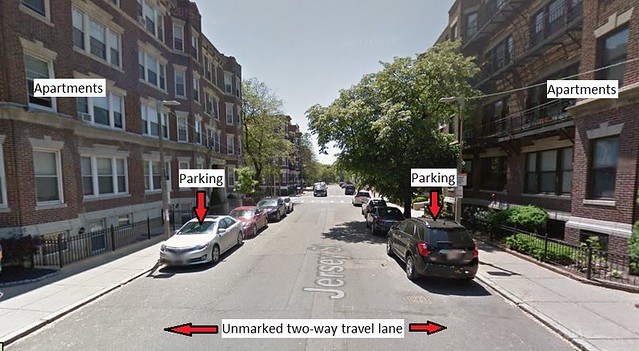 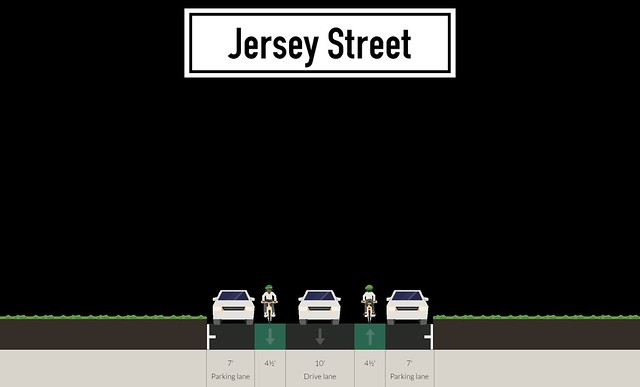 West Newton Street in the South End of Boston is a prime candidate for an advisory bike lane treatment. The roadway is primarily a local street that connects Columbus Avenue and Huntington Avenue and is intersected by the Southwest Corridor, a popular bicycle and pedestrian pathway. Figures 5 through 7 below display numerous views of the street in its current state. The roadway services mostly residences with a very few amount of storefronts. It currently is a two lane roadway with pedestrian walkways and parking on both sides, but lacks any bicycling infrastructure. It also has several pedestrian walkways at all of its intersections as well as a pedestrian walkway connecting the Southwest Corridor Path East and West of the roadway, which is used for pedestrian traffic between the Southwest Corridor and the neighboring Titus Sparrow Park. Columbus Avenue which intersects W. Newton Street currently has bicycle lanes. West Newton Street is currently about 33 feet wide, which renders it too small for a dedicated cycle track or bike lanes, pedestrian walkway, parking on either side, and two travel lanes. In order to accommodate a new advisory bike lane system, a reconfiguration of the roadway would work as shown below in Figure 8. This use of space would still allow for the same parking capacity for residents, moderately sized advisory bike lanes, and a vehicular travel lane width of 10 feet. This travel lane width would be more than suitable for a vehicle along a residential street with a low speed limit. This roadway also services a large amount of pedestrians and bicycles, so vehicle speed should be limited using some of the traffic calming techniques observed on Dutch streets. Speed humps would be implemented at each pedestrian crossing area with different types of pavement to further signal users that they are in a conflict zone. Advisory lanes here would also connect the bicycle lanes on Columbus Avenue with the Southwest Corridor, giving residents of the South End easy access to Back Bay and Massachusetts Avenue T Stations along the Orange Line. This would also discourage through traffic from using West Newton Street as a route between the South End Area and Back Bay, making the residential neighborhood much safer. 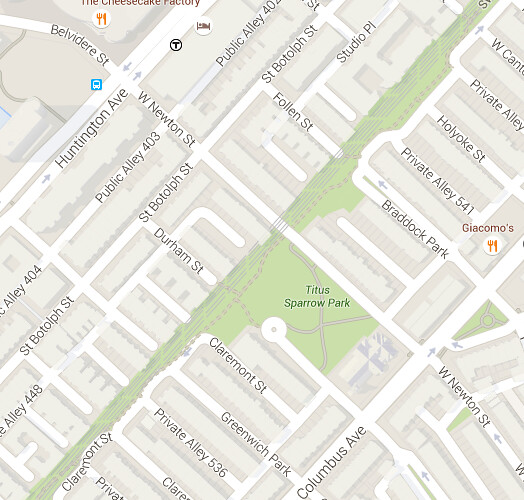 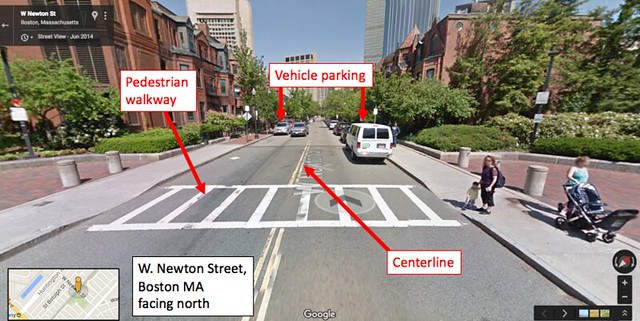 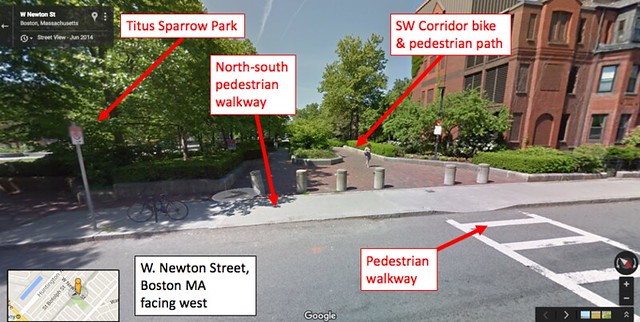 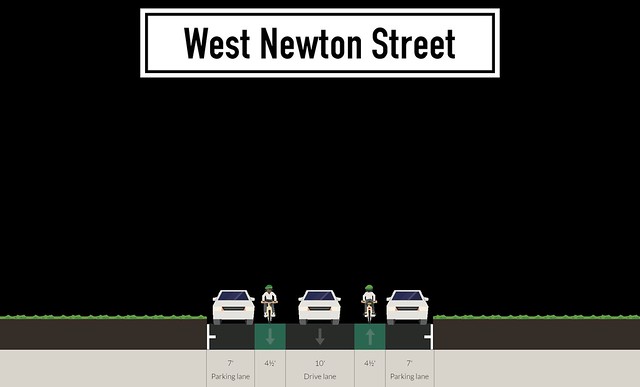