I want to apologize for the pictures as I had no other option to get the assignment done within the time constraints. My laptop broke and all I could use to edit the pictures was snapchat. For some reason my laptop only works while at school it seems, so I will be uploading my redone photos as my computer works and I am able to edit them. Thank you.

The four days that I have spent in the Netherlands have convinced me. I absolutely need more biking facilities in my life. The facilities that we as a class have been riding on and experiencing in the short time that we’ve been here have granted me a completely perspective on how enjoyable, efficient, and useful biking in cities can be. In the following sections several different biking facilities, bike lanes, greenways, cycle tracks, advisory paths, service roads, and separated paths, utilized in the Netherlands will be broken down and commentary about personal experiences while riding on these facilities will be shared.

As one of the most common facilities implemented in the US, the Netherlands take on bike lanes is far more superior. This may be in part to the locals being used to always looking out for cyclists while they’re driving, but on the roadway that went through the school zone (stop 1), I had several occurrences where I could see people getting ready to open their doors before me, but they took the extra look over their left shoulder to see that someone was coming and that they should wait for me to pass. This cautionary action and others like that made by motorists, especially in a school zone, made the bike lanes safe and a good use of the space provided in such a narrow street.

For the complicated intersection that was featured in stop 2, the particular use of the pocket left turning lane for the 3-road intersection was an especially good choice because of the awkwardness of the intercept from the beginning. For bicyclists wanting turn left, the bike lanes would have not worked as they are intended to as they may have gone straight through one road but then would have had to cross the oncoming traffic turn into the next. With the pocket left turning lane, the bicyclists avoided a 240 degree turn and were able to make the 120 degree turn they needed.

Specific to stop 4 was the pocket bike lane where motorists used the outer part of the lane, surrounding the cyclist to make their right turn. This facility was safe in that it was implemented in regions where motorists were not going fast, where the right turn was a rare option, and where cyclists would also have to stop at a stop light if red. Although the main purpose of the bike lane was to keep safe through bicyclists, the implementation of the pocket continues that through motion while also allowing for motorists to maneuver safely around them.

Overall, the bike lanes in all 3 locations were fitting to the needs of the surrounding obstacles, providing a cheap and operable mean for the cyclists to use. 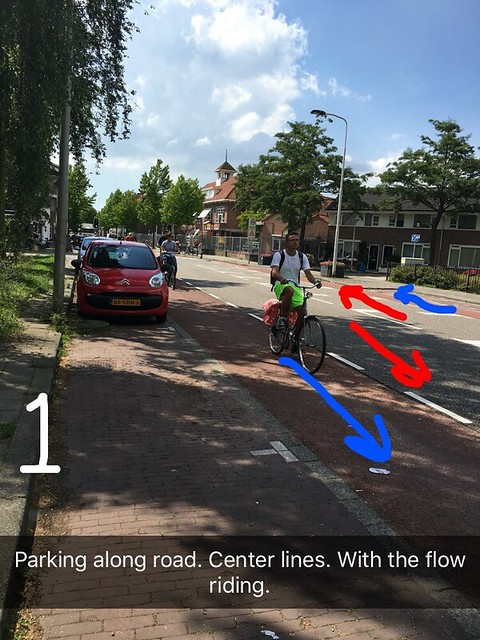 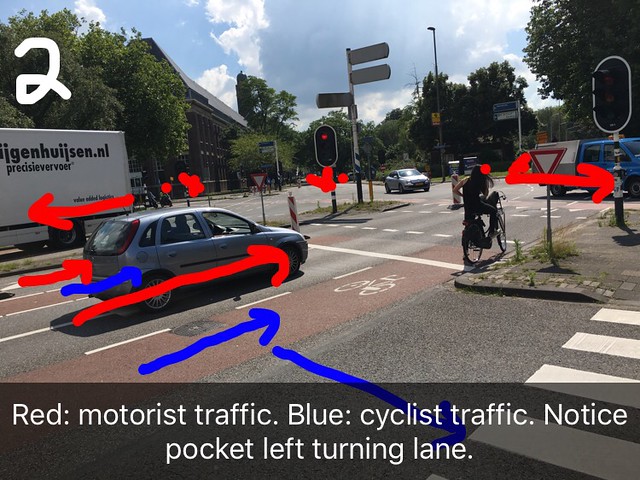 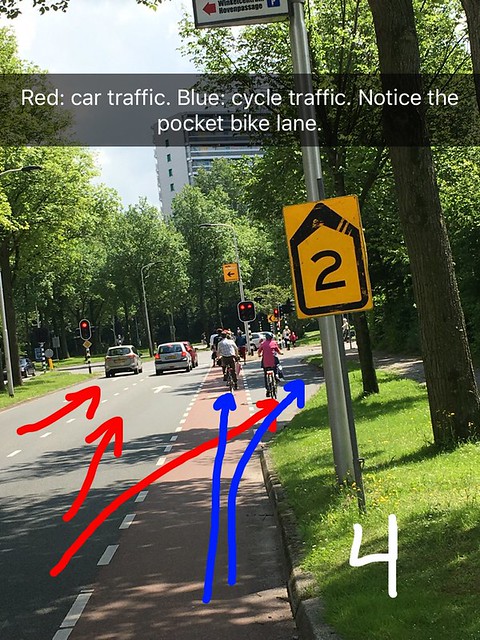 Quietways goes by a many number of names such as bike boulevards and greenways, but overall the names all refer to the same thing. Quietways are a previously used motor vehicle road which have been demoted to being primarily used by bikes. These paths are not completely blocked off to motor traffic, but they do make through traffic for motorists impossible with the aid of things such as one way road designations and vertical blockers. As the greenway is a bypass for bikes from busy streets and intersections, it is also one to pedestrians also and, although their intrusion and those of moped drivers is understandable, it removes the final barrier of comfort for the rider. Another issue along these solitary paths is the speed at which some scooters/moped drivers would pass as they have no speed restrictions that are naturally made with intersections with roads.

Despite the minor issues, the rides along the greenways were overall the very leisurely, and that ease could be seen not only in a slower pace from the group, but also by other local bicyclists. It was apparent that where the greenway was in a more rural area, that the design provides greater ease to the rider which creates a more pleasurable and enjoyable ride. Stop 3 (through the neighborhood connecting the area around TU Delft to the bridge) and stop 7 (under the canal), both of which are paths that connect to different facilities, were far more relaxed than those areas that the paths were coming from or leading to. 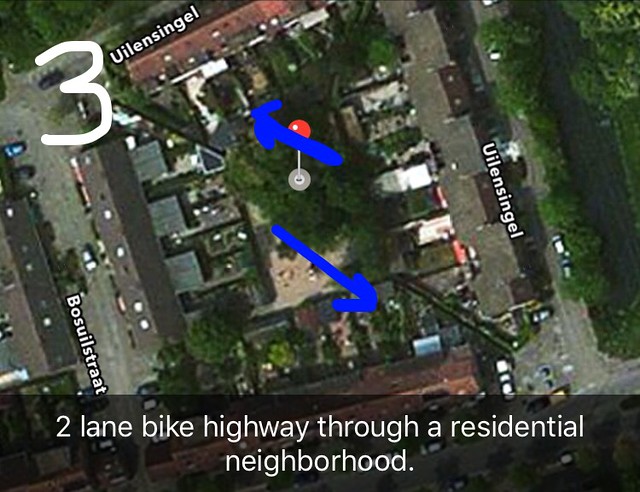 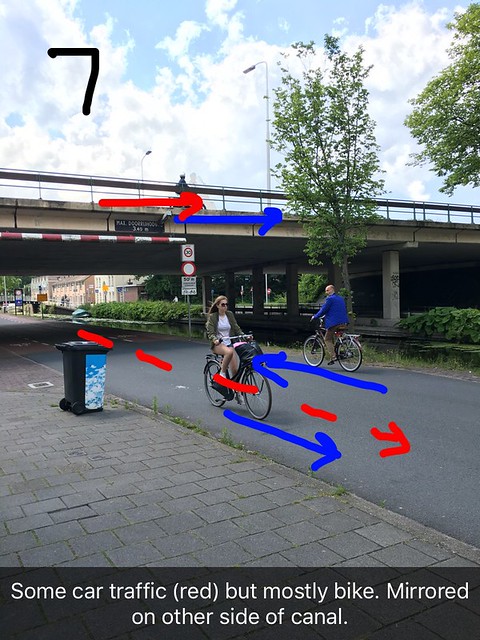 Cycle tracks provide about as much protection from motorist as greenways do in the straightaway portions of the path. Generally cycle paths have a physical separation between them and the main road. Cycle tracks can be in one and two lane versions, and they may switch back and forth between types along lanes as is dictated by the width of the location and the traffic on the tracks. At intersections where the cycle tracks and the main road ways cross, bicycles must yield to stop lights. As long as the light signals at intersections are paid attention to, the safety of the bicyclists is never compromised. With the motorist stop lines behind the cycle track in terms of relative closeness to the main square of the intersection, the motorist is forced to stop and make sure that no cyclist is coming. Within the queue area before the cycle track where a single car turning right may wait the driver is already turned to a 90 degree so they will see upcoming cyclists going straight through their passenger window before continuing the turn.

In particular, at stop 1, just outside of Albert Heijn, the cycle track was diverted a few feet on top of a raised crossing so that they may continue on while the motorist waits in the designated queue area until there is a break in the traffic. This raised crossing provides great safety to bikers on a cycle track on roads that meet at a T, not an intersection. Though the cost of the raised crossing is maybe too significant for the purpose of getting rid of an inconvenience for the bicyclist of going up and down from track to road and back and for making the cars slow down, the novelty of the idea and its execution in practice makes the cycle track just that much more advanced and safe for the bicyclists. Stop 5 provided a means of protection almost equivalent to that of a greenway, only interrupted by very low traffic road intersections. Stop 6, running through previously converted section of roads and trains was a little more tedious to ride on because of the constant intrusion of pedestrians stepping into and out of and walking through the cycle track. Yet despite this, the overall decision to implement a cycle track in this renovated area allows for bicyclists to be separated from the other 3 modes of transportation: tram, car, and walking. 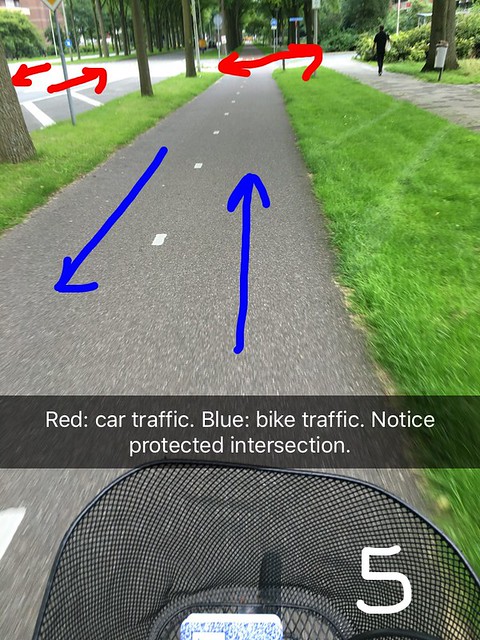 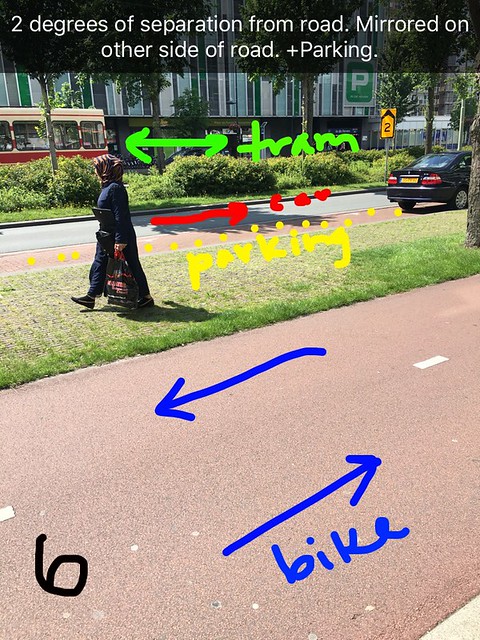 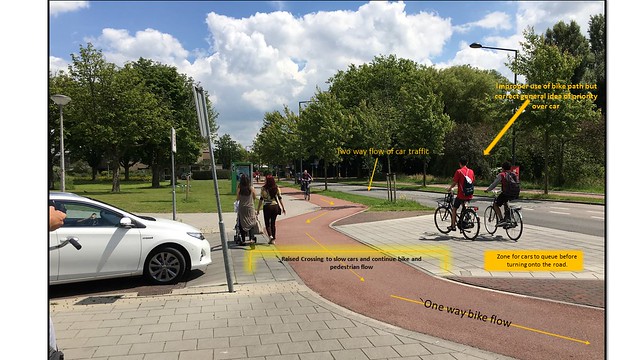 Advisory lanes provide the same general provisions as bike lanes do, only the lane of which drivers travel through has no center line and is too narrow for motor vehicles to pass one another without merging into the bike lanes. This merging in some cases would be dangerous but advisory lanes are primarily implemented in locations where the speed of traffic is slow, generally less than 25 km/h, where there is limited traffic, and where there are limited points of intersection between crossing roads.

Advisory lanes don’t seem like they’d work, but they definitely do. In the 3 stops we made, the only real trouble that came from them was when a semi stopped dead in the middle and cause backup in both directions. They provide safety to riders in limited space while also slowing down traffic in a secondhand way. If narrow enough, the lanes cause the motorists to slow down to avoid oncoming and through traffic. If wide enough, the lanes promote neglect in the speed limit, making them more unsafe.

As obvious by their use in a number of narrow locations, the advisory lane is a design that is great for use in residential areas with limited traffic and slow speed limits. Locals riding on these lanes moved at relatively slower paces as compared to those in say bike lanes and cycle tracks. I personally found them entertaining and stimulating because of the show that ensued when cars came at each other head on and when they were able to maneuver around one another without hitting cyclists on the shoulders of the roads. 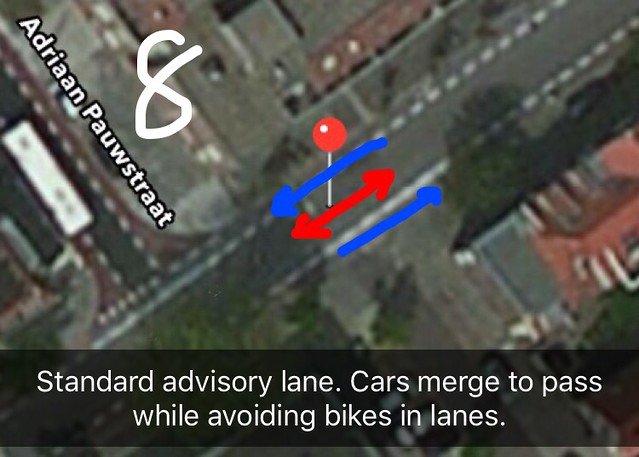 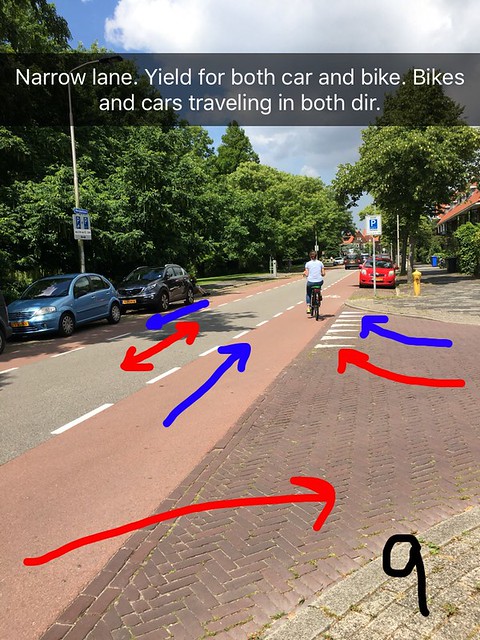 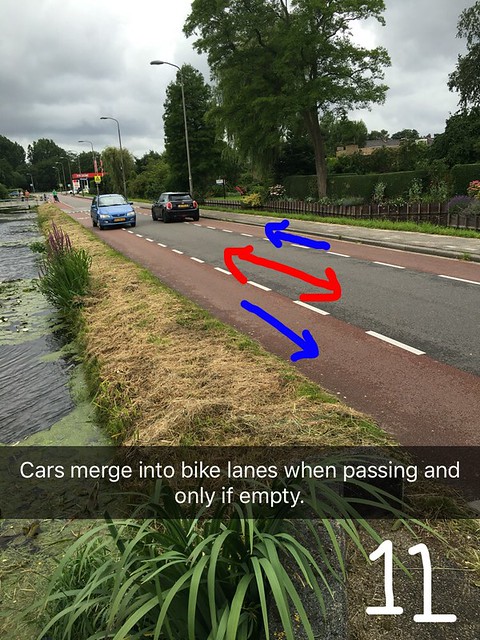 Service roads are very similar to cycle tracks only on these paths local traffic of people living in the bordering homes are allowed on the roads with their vehicles. These roads deter through traffic with dead ends and one way roads, but they are great for through passing cyclists.

During the tour my group did not make it to a service road so a picture was not taken of the example.

Separated paths provide a completely segregated path from all motor vehicle traffic. These paths move through generally rural areas or through parks and provide riders with a completely safe and uninterrupted path. In general, I did recognize that the traffic on particular separated paths grew to be heavier while approaching major roads or cities from rural areas. In addition, cyclists moved very quickly along the path as did scooter drivers when approaching a major road, but overall during the ride on the further outskirts of the path the pace of locals and of the group was slower than what may be normal for an advisory lane or a bike lane.

Although this is arguably the best option for any cyclist, it is not the best option for all locations. This highway took up a lot of space and is not reasonable to areas like historic Delft. If in some way the highway could be raised above street level, only then would it be able to work in areas other than countrysides and empty forests as it was in stop 14. 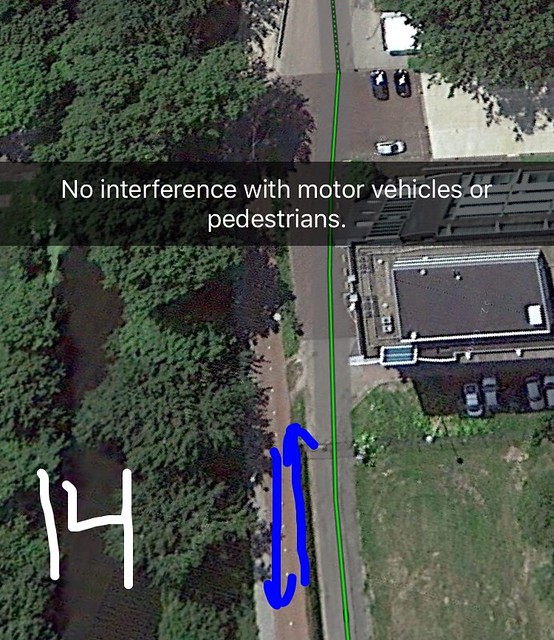