The Importance of Colored Bike Lanes

By Amanda Carro and Kara O’Neal

An important component of Sustainable Safety, Predictability, is when the road environment influences the road users’ behavior through consistency and continuity of road design. Bicycle education starts at a young age in the Netherlands so the people grow up knowing what bike paths look like and how they differentiate from pedestrian walkways and roadways.

The purpose of using red asphalt for bike paths is to help distinguish it from just an extension of the sidewalk or roadway. Red is used consistently and only for bike facilities which contributes to the “Predictability” of Sustainable Safety. When a driver sees red asphalt across the road, he knows he is crossing a bike lane and to be on the lookout for bikers.

The location where we filmed is a 1+1 roadway with parking and one-way bike paths on both sides with sidewalks on the outside of the bike paths. Colored pavement is appropriate here because the red asphalt in the roundabout tells cars to look out and yield to any bikers that may be present. Along the corridor, the bike path is protected from moving traffic by the parked cars so the red asphalt is used primarily to catch the pedestrians’ eye. The colored pavement works well, even for those who didn’t grow up in the Netherlands, because it is easy to understand and communicating through pavement is much more effective than just putting signs up that indicate you are on a bike path. 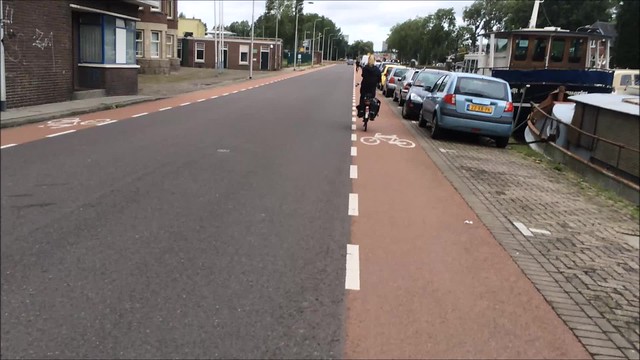 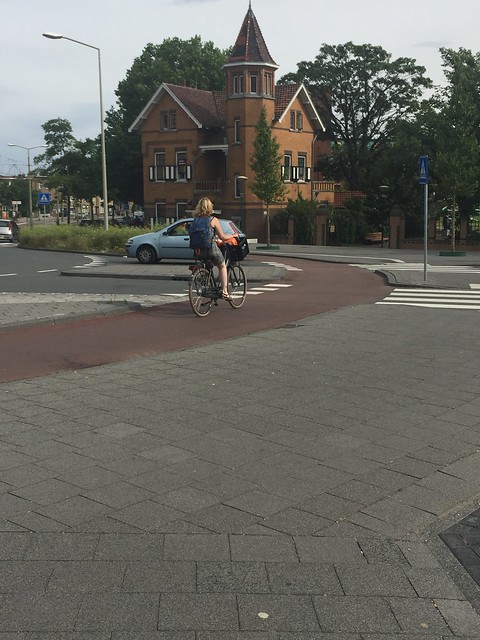 The photo above shows a biker safely riding on the colored pavement as a car yields to cars in the roundabout.