Assignment #5: Comparative Analysis of Bicycling Facilities in NL and US

A cycle track is a bike lane with a physical divider that separates the bicyclists from cars. Examples of physical barriers are parked cars, curbs, knock down signs, etc. One-way cycle tracks are typically preferred when there is room so that a car only has to worry about bikes coming from one direction.
Part A

Delfgauwswegeg has been retrofitted to include two-way cycle tracks. The main factor that led to this choice is a lack of space; there’s about 48′ between the canal and the houses. The two lane travel lane is 20′ across, plus 8′ for parking. This leaves around 12′ for a protected bike lane and pedestrian sidewalks, making a one-way cycle track unreasonable. The cycle track is on the residential side, versus canal side, so that the parked cars can act as a barrier between the bikes and the moving cars. Due to the space constraint, it’s necessary that the parked cars act as a barrier because there is not enough room to construct a separate one.

Having cycle tracks residential side leads to the issue of cars pulling in and out of driveways over the cycle tracks, which puts bikers at risk of getting hit. This problem is easily solved by raising the driveways and having the cycle tracks placed far enough back so the cars turn into their driveways at 90 degree angles. From this angle, cars are able to easily spot bikes going either direction.

Cycle tracks also cause issues at the end of Delgauwswegeg where the road leads to a roundabout, and bicycles have to weave to enter or exit. The treatment for this was to have the cycle track approach the roundabout at nearly a 90 degree angle, so bikes have to slow down and can gain a clear view of other bikes on the roundabout. This allows bikers to enter more safely. 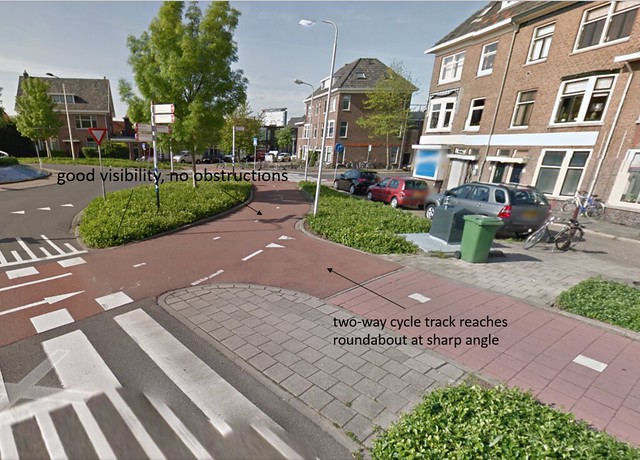 Figure 2. Roundabout at the end of Delfgauwswegeg

The cycle tracks at Ruys de Beerenbroukstraat were made to be one-way for multiple reasons. This area contains shops, unlike Delfgauwswegeg, which is mostly residential. Therefore, cars pulling in and out of parking lots only have to look one way for people on bikes. One-way cycle tracks also make intersections easier for the biker. When crossing at the end of Ruys de Beerenbroukstraat, people on bikes only have to concern themselves with other bikes approaching from the right. Finally, there’s simply enough space for one-way cycle tracks. The total length of the 1+1 travel lane, one-way cycle tracks, and pedestrian sidewalks is 60′. One issue that one-way cycle tracks cause is that bikes will go the opposite way anyway if it’s easier for them. This is dangerous at entrances to shops, where cars assume they only have to look one way. This problem is solved in one way by giving the same treatment to shop entrances as was given to driveway entrances on Delfauwswegeg (raised driveway, cars turn at 90 degree angle, etc.), as well as frequent and safe crosswalks for bikes and pedestrians. 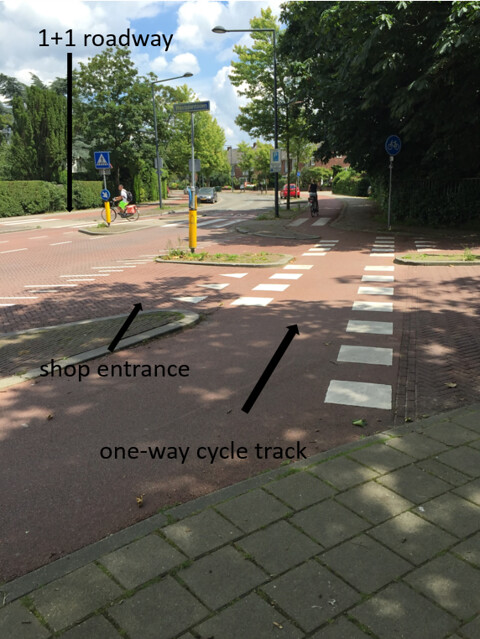 The street we chose to redesign is Massachusetts Avenue from Westland Avenue to Boylston Street, which is approximately a quarter of a mile. We chose this street because the bike lane was originally between parked cars and the roadway. Frequently, delivery trucks and mail trucks park half in the parking spots and half in the bike lane, which causes bikes to mix with cars. To fix this problem, we recommend one-way cycle tracks in both directions because there are already frequent crosswalks along this road so crossing to the other side would not be difficult. Massachusetts Ave isn’t wide enough to have two-way cycle tracks on both sides of the road as well as have a wide enough sidewalk to accommodate the flow of people. Also, if the cycle track was two-way, bikes would be forced to cross the four lane roadway in order to adjust back to the normal side when crossing Westland Ave or the bridge over I-90.

Figure 4. Massachusetts Ave as it currently stands with two 10.5’ lanes in each direction, 5’ bikes lanes, 8’ wide parking spots, and varying width of sidewalk from 20’ to 30’.