Bike lanes are well worth the small expense of painting lines on just about any road. However, in some places it feels as though a bike lane is not enough. Bike lanes on narrow roads or ones with higher traffic can make one feel less safe. 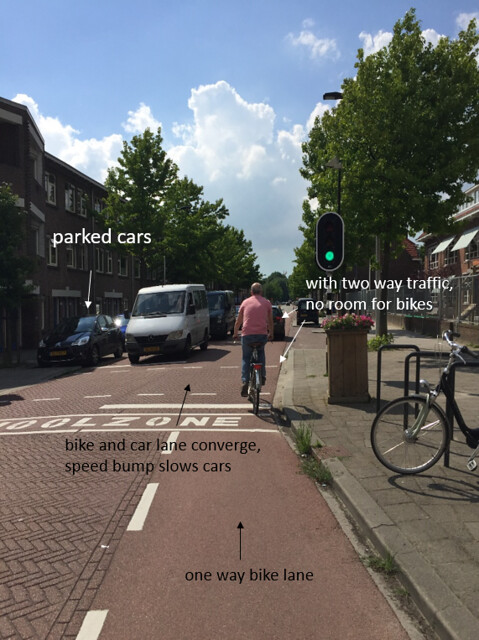 Going along the bike lane in Nassaulaan felt very safe since there wasn’t much motor traffic and the speed limit was low. Even in the school zone, where the bike lane and road converged into one, the cars were forced to slow down enough to where I felt safe. Despite being retrofitted from an old road, I still felt there was plenty of room for two bikes and a car, although there’s barely space for two way motor vehicle traffic. The inexpensive cost of painting bike lanes serves its purpose on this road. 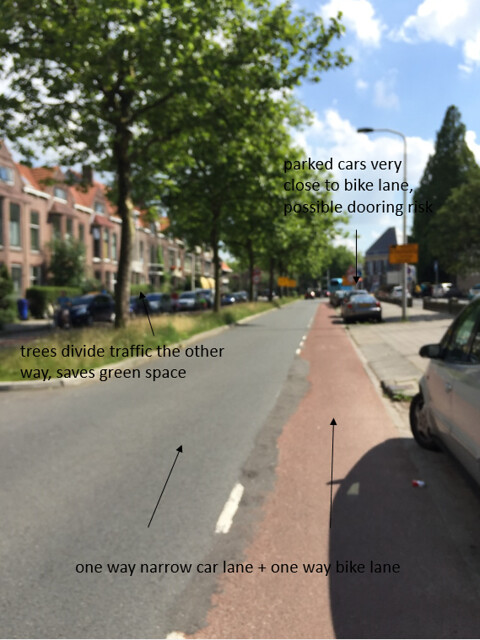 The bike lane on Julianalaan felt comparably less safe due to the space constraint. The bike lane was sandwiched between a narrow road where cars were speeding by, and parked cars. This area could be improved if the row of trees in the center of the road were taken out, or possibly speed bumps to make cars slow down. Both methods are more expensive than painted bike lanes, but worth it for the safety of bikers. 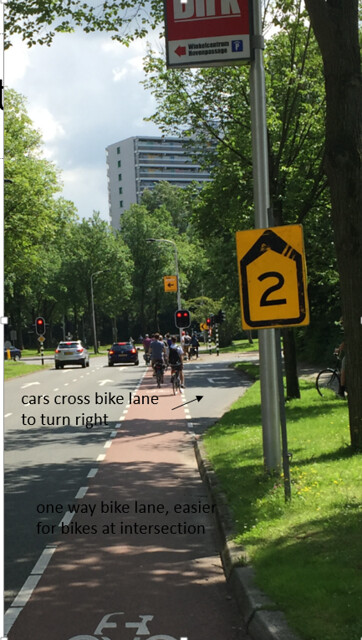 This bike lane felt relatively safe, despite riding alongside cars and even riding between them at right turns. I didn’t feel that this area would benefit any more from a cycle track, a much more costly endeavor than painting lines. Motor vehicle traffic was not particularly heavy or fast, and natives that grew up on bikes should be comfortable in these lanes.

Cycle tracks are one of the safest and most relaxing facilities. They’re generally wide enough so two bikes can ride side by side, or mopeds can pass bikes safely. While cycle tracks are expensive and take up space that could otherwise be used as green space or for cars, in areas with higher traffic the ability for bikers to ride quickly and safely cannot be achieved by any less costly method. 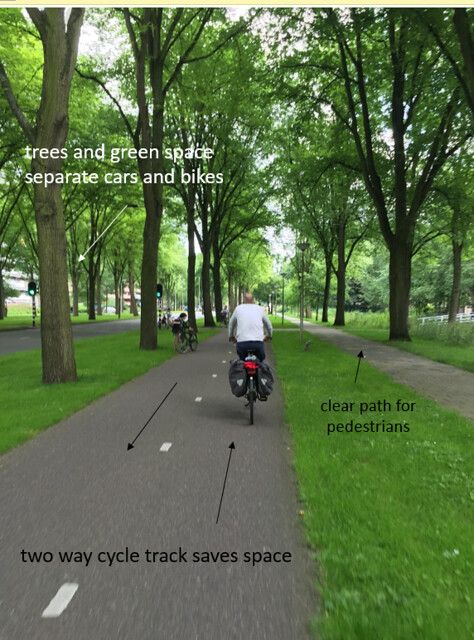 Cycle tracks like those at Voorjpfdreef literally feel like a bike in the park. Also, where there are parallel sidewalks for pedestrians, the difference is clear enough so pedestrians don’t wander onto the bike path, and vice versa. Although it’s quite costly, other methods such as bike lanes would not have been safe in thetwo car traffic. 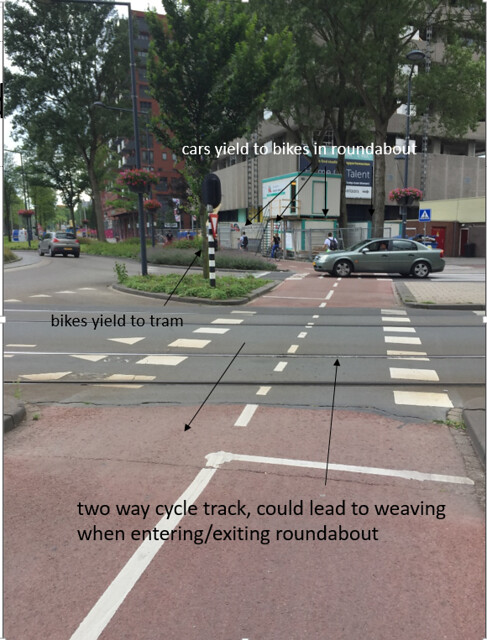 This method of allocating bikes isn’t the cheapest; however, in instances where major road construction is being done (i.e. the road diet at Papsouwselaan), it’s easier for the cycle tracks to be added. For areas with high motor vehicle traffic, cycle tracks are definitely worth the expense to keep bikers safe. This roundabout just before Papsouwselaan is a good example of this. 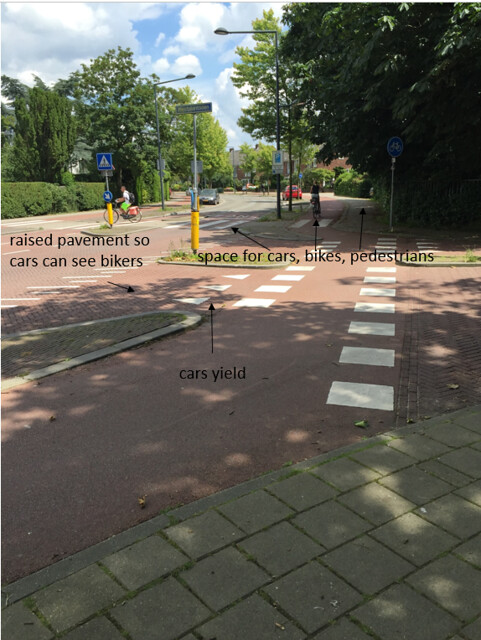 The one way cycle tracks at Ruys de Beerenbrouckstraat are very safe and well designed. There is obvious separation between cars, bikes, and pedestrians, and the raised pavement at driveways ensures that drivers will see bikers. Although I did see people riding the opposite way on this one way cycle track, it’s not congested enough where this would become a major issue. The expense of cycle tracks are worth it on this road since cars travel too fast for people to ride beside them safely.

Like bike boulevards and cycle tracks, bicycle highways are safe because it gives the biker space to ride safely away from cars. Bicycle highways are particularly safe and relaxing because they have the right of way at intersections and thus don’t have to worry about stopping. But, the cost of designing and building these facilities can easily make implementing them impractical if they don’t connect important places. 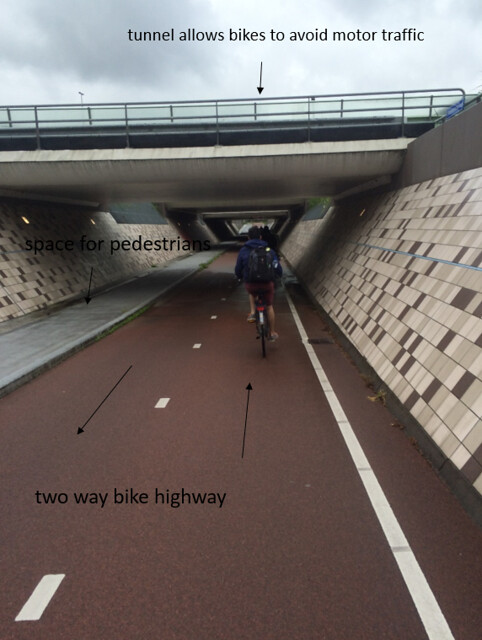 The tunnel on the bike highway N470 allowed us to quickly pass under traffic we otherwise would have to yield to. Providing a way for bicycles to ride quickly from point A to point B can be incredibly expensive due to the separated path and tunnels to avoid traffic. But, as mentioned, the cost, as well as the sacrifice of space, is worth it in areas with high bicycle traffic connecting important locations.

Because advisory lanes are often retrofitted from older roads, there is only so much space to accommodate for both bikes and vehicles. Looking at roads with advisory lanes, one would think it was a one way street. These are probably where I felt the least safe biking; however, some roads were designed better than others, despite the limited space. In areas without much money allocated for bicycle transportation, advisory lanes are better than nothing. 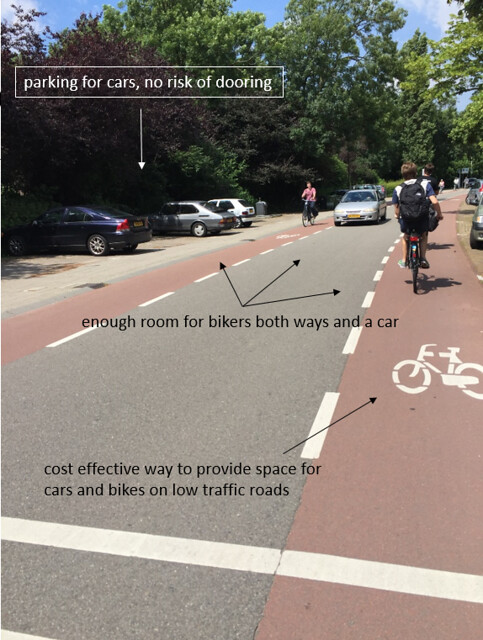 Biking on Adriaan Pauwstraat and Westplantsoen, I saw very few cars, and the ones I did see were traveling slowly. Advisory lanes are the most practical solution here since it is so cheap and motor traffic is low enough. 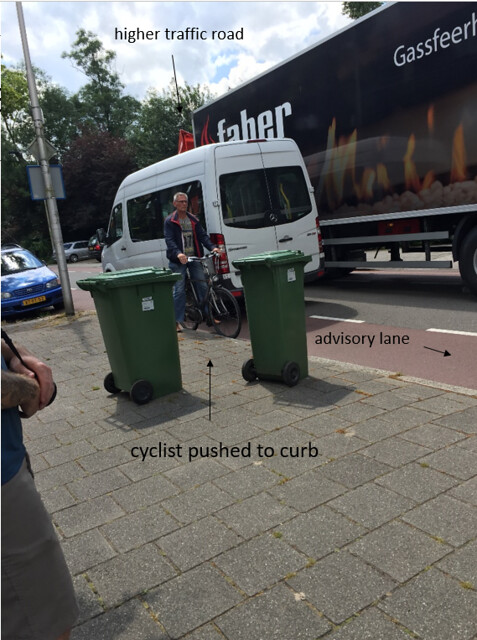 On Hugo de Grootstraat, traffic was a little heavier. It calls to question what would happen if cars and bikes going both ways encountered each other in the same spot. The scenario pictured above with a large truck is surely a little odd for this neighborhood, but nonetheless, there might be a bit too much motor vehicle traffic on this road for advisory lanes to be the safest option. Because of the narrow road, costly construction would have to be done to build a better facility. 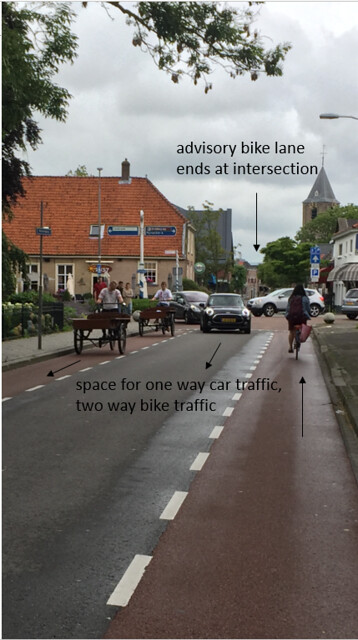 At the intersection of Molenweg and Kerkweg, there are no traffic lights, and bikes ride with cars through the intersection. As someone not familiar with all the road laws, I wasn’t sure who yielded to who. Certainly natives must be more comfortable navigating along with motor vehicles—a picture below will show someone on a bike passing another person in the advisory lane, even though a car is approaching from behind. 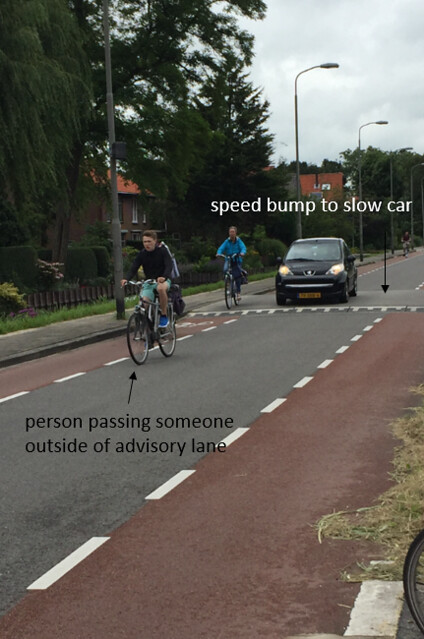 As long as motor vehicle traffic is not too high, advisory lanes are a cheap and practical bike facility.

It’s hard not to feel safe on a bike boulevard—it’s essentially driving on an empty road. I imagine the cost is minimal, too, since they’re repurposed from motor vehicle roads. 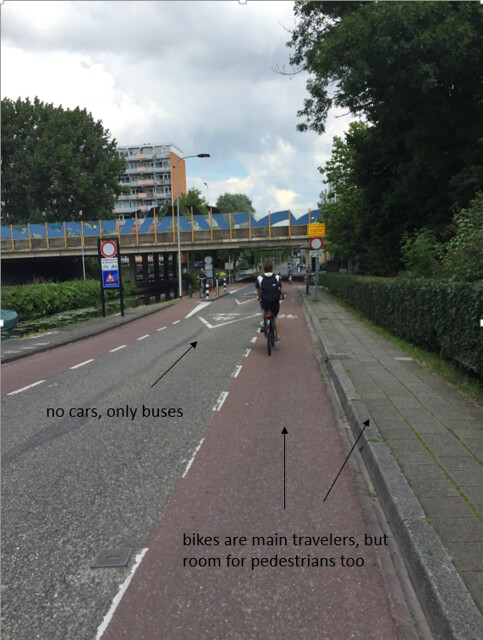 There may be some issues on Buitenwatersloot since buses occasionally pass through if bikers let their guard down on bike boulevards, but in general the biker can relax. This boulevard was inexpensive since the road was already there—traffic just had to be directed. 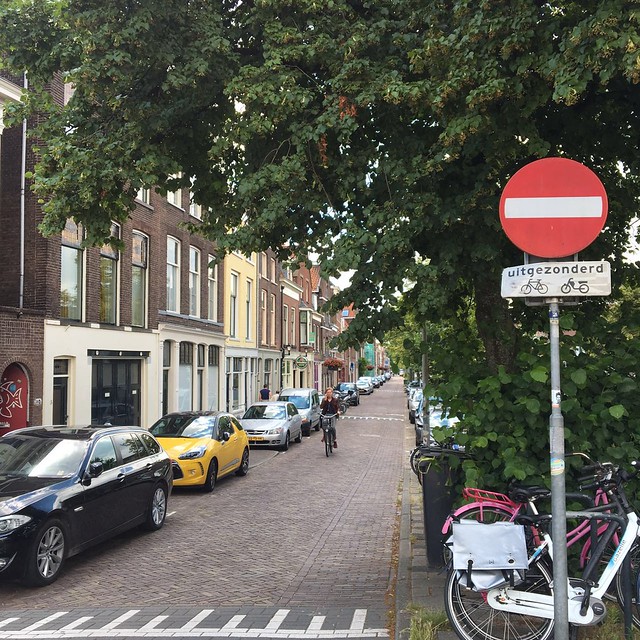 The other one on the Abstwoude path is just as safe, and contains bridges and tunnels that allow bikes to bypass traffic. From my experience, at least, this utilizing this road for bikes instead of cars is worth it for the function, since its part of the route from TU to the houses.