The only bike lanes our group got to visit were those on Martinus Nijhoflaan and Buitenhofdreef, but these are also the form of bike infrastructure I have the most prior experience with because they are the most prevalent form in the US. Both roads we visited are divided into two single motor vehicle lanes with a grass median in between, and each side of the roads has a bike lane marked off by a dashed line. Because the motor vehicles cannot switch lanes, and because their speed is constrained by relatively narrow lane width, their movement is straightforward, predictable and controlled, and consequently the adjacent bike lanes feel safe. Bike lanes are the most inexpensive cycling space to install—on an existing road with sufficient width, they require only a simple repainting. However, while the Dutch bike lane designs feel safer than their US counterparts, they still suffer from some of the same drawbacks. Most notably, the intersections of both Martinus Nijhoflaan and Buitenhofdreef have right-turn lanes to the right of the bike lanes, and to reach them the motor vehicles need to cross over the bike lanes from behind. On cycle tracks, when the lines of cycle and motor vehicle traffic need to intersect at an intersection like this, it is possible to provide additional signage and traffic lights to keep interactions between cycles and motor vehicles controlled and safe. 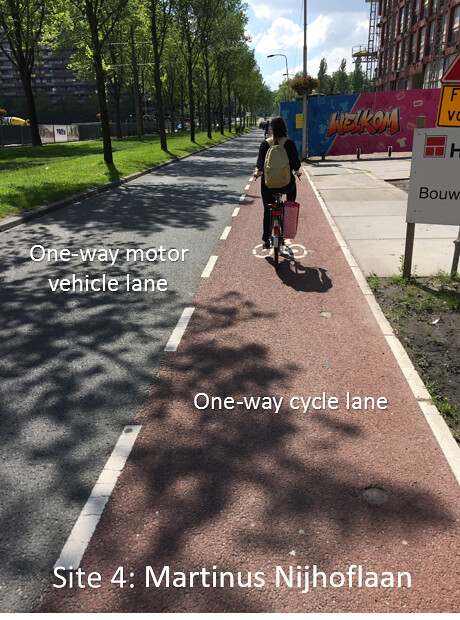 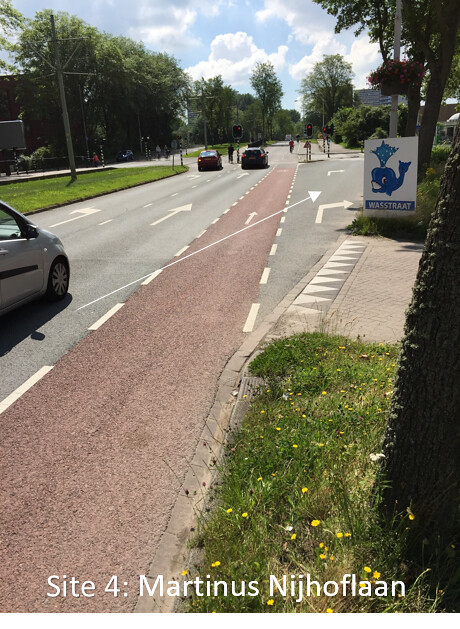 1-2. Motorists need to cross the bike lane to make a right turn

Bike boulevards are low-volume roads, generally unmarked, where cyclists are given priority over motorists. It appears that they are generally roads originally constructed for motor vehicle usage and later repurposed as cycling infrastructure. The cost to convert a road into a biking boulevard is therefore likely very low–the only changes that need to be implemented at the existing road are some means of restricting access to keep motor traffic volume low, and potentially some devices to keep motor vehicles moving slowly. At Buitenwatersloot, a former highway lining opposite sides of a waterway has been converted to a bike boulevard on one side and a pedestrian-only pathway on the other. Cyclists in both directions generally occupy the main road and only move to the side to make way for cars. The road is wide enough for a car with a cyclist and a parked car on each side to pass by, but only slowly. The biking experience at the Abtswoude path was similar, but there were even fewer cars, and it nearly felt like a cycle track. It is safe to ride on bike boulevards, as the volume of bikes is far greater than the number of cars, and the cars move slowly due to various speed control devices and the constant presence of cyclists. However, as an American biker, it feels very foreign to be the dominant vehicle on a street with no lane markings, and it was difficult to trust the cars to be patient. 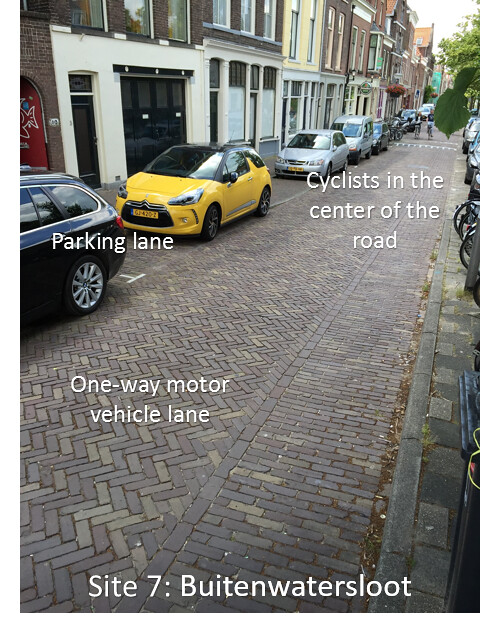 Figure 2-1. Bike boulevard in use by cyclists and parked cars 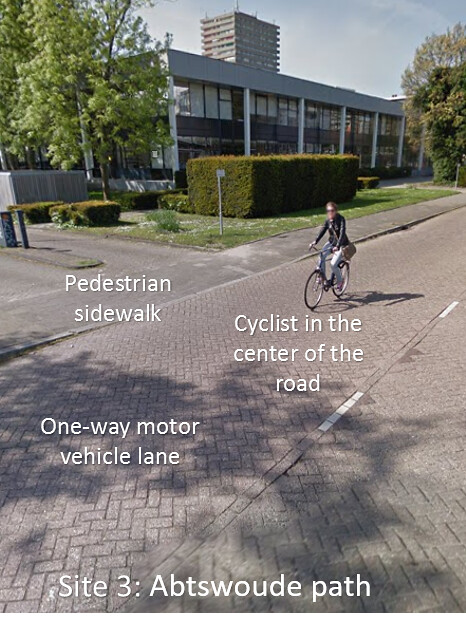 Figure 2-2. Bike boulvevard in use by one cyclist

Cycle tracks are the predominant form of cycling space in the Netherlands, and generally they are the most desirable for bikers. They are dedicated tracks that service cycles only with no traffic from motor vehicles or pedestrians, and traveling on them feels safe, easy, efficient and pleasant. Because they include vertical separation from the motorway and occupy much more width than a bike lane, cycle tracks are relatively expensive to install compared to sharing the road between cyclists and motorists. However, the tradeoff for safety and ease of use is very worthwhile on any road whose level of service is non-residential. At Voorhofdreef, a roadway in a very wide, green space between buildings, there is a strip of greenery in the centerline, followed by single motor lanes in each direction on each side, then two-way cycle tracks on each side, then finally pedestrian sidewalks at the exterior, all isolated by several feet of grass and trees. This sprawling cross section, with three modes of transit running together but clearly delineated, beautifully illustrates the Dutch design style. The only situation in which cycle tracks realistically threaten the safety of their users is at intersections with motorways and pedestrian paths, and some of the cycle paths we visited primarily highlighted intersection design concepts. Papsouwselaan has a large, busy roundabout in which motorists, cyclists, pedestrians and trams all intersect. Notably, the cyclists were given priority and the motorists had to yield, and consequently the intersection felt very convenient and safe to use. The intersection at Ruys de Beerenbrouckstraat, contrastingly, required cyclists to yield twice to both lanes of motor traffic. The crossing still felt mostly safe, but due to pedestrians and cyclists moving parallel to traffic on both sides of the road, it was more difficult. In general, while these intersections are designed very well from a safety perspective, I found them somewhat overwhelming to navigate as a newcomer. There are pedestrians, motorists, and cyclists coming and going in every direction, and the signage on the ground and at eye level can cause some degree of sensory overload. However, the movements and concessions of right of way are all intuitive, and with practice using them will likely become second nature. 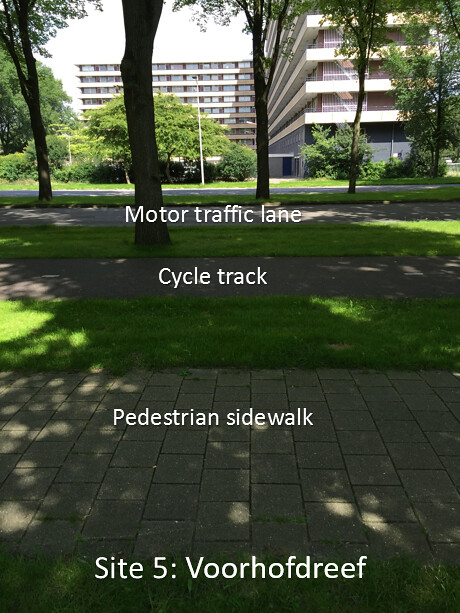 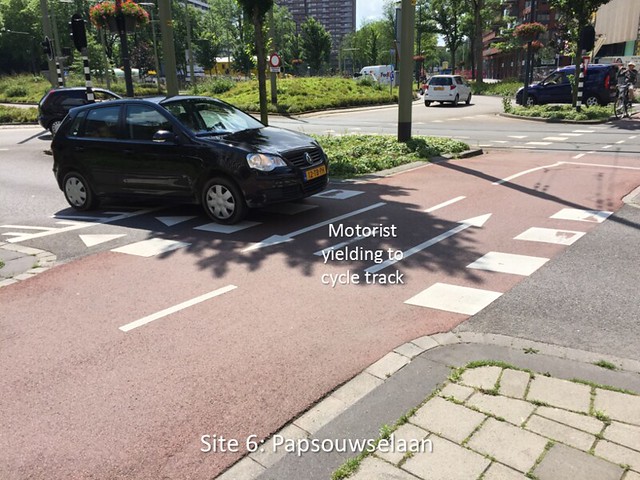 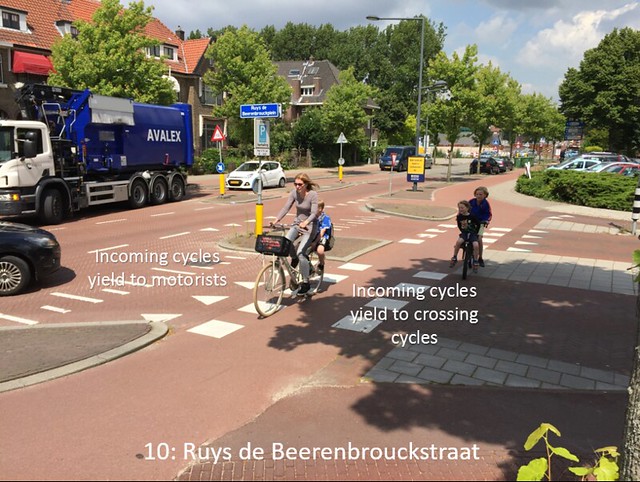 Advisory lanes are one of the most unique and distinctive bike infrastructure options in The Netherlands. The design features motor vehicle space in the middle of the road, without a marked centerline, for two-way motor traffic, and bike lanes line both sides of the road, marked off by dashed lines only. However, the motor lane is not wide enough to accommodate two vehicles passing each other–the motorists need to pass into the bike lanes to get enough space. The assumption behind the design appears to be that on certain roads, motorists will often pass by cyclists and motorists will often pass by other motorists travelling the opposite direction, but it is unlikely that all three–two motorists and a cyclist–will meet at the same time. Therefore, the advisory lane system is a clever way to save space by providing enough road width for one situation or the other, but not for both simultaneously. In my experiences riding on Hugo de Grootstraat, Westplantsoen, and Schimmelpenninck van der Oyeweg, this generally proved to be the case. As a cyclist, using the advisory lanes felt no different from using standard bike lanes on a one-way street, and I felt that my space was well-protected. In addition, the possibility of encountering an incoming car head-on appeared to motivate the motorists to maintain a slow, safe speed. The only instance when the system appeared to fail was when two cars met on Schimmelpenninck van der Oyeweg while our whole student group was passing by in one of the advisory lanes. Without enough space to pass each other, both drivers had to idle and wait for roughly 30 seconds while our group cleared out. This illustrates that the advisory lane system, while very space-efficient, breaks down quickly and dramatically under unanticipated volumes of traffic. However, on a quiet country road like Schimmelpenninck van der Oyeweg, a group of twenty cyclists traveling together is clearly an anomaly. For low volumes of traffic, the advisory lane system appears to be inexpensive, easy to use, and safe. 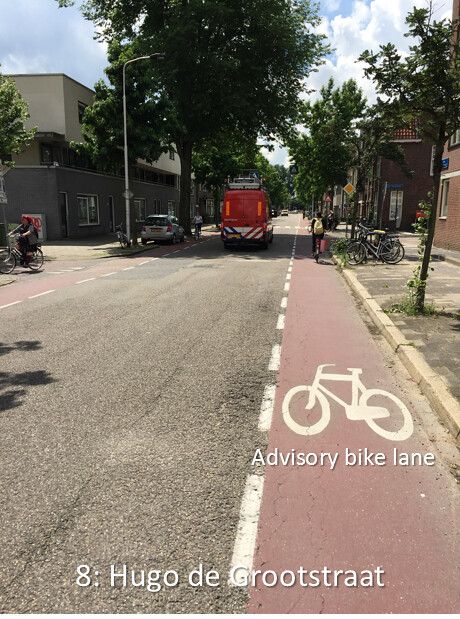 4-1. Advisory lane system in use by cyclists both ways and a van 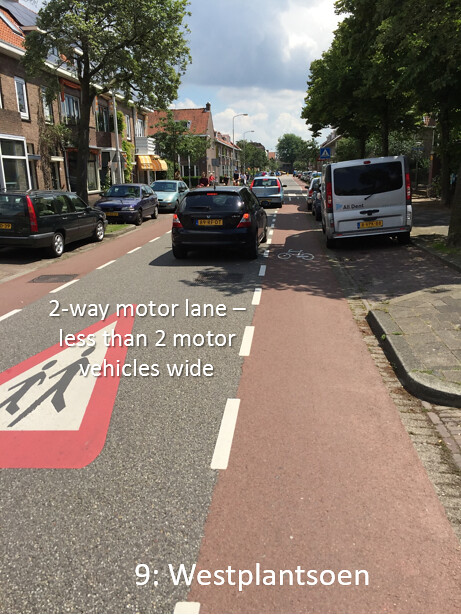 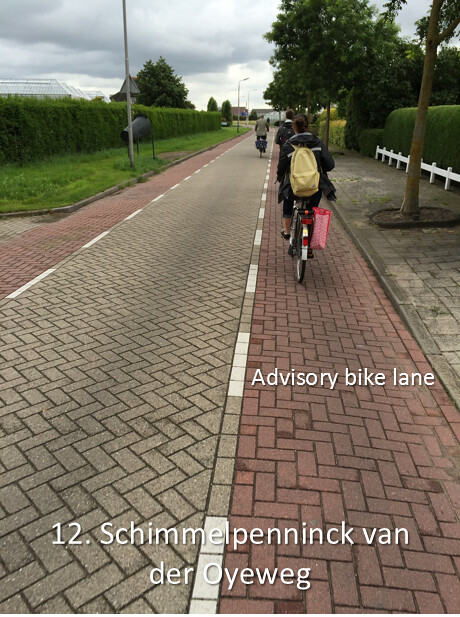 4-3. Advisory lane system in use by cyclists

Service roads are an essential feature to prevent congestion on connecting roads. They provide an isolated motor vehicle space to access residential parking without polluting the main roads with the safety hazards and congestion associated with parking. Providing a service road alongside a connecting road is similar in cost and space to providing an additional travel and parking lane on the connector road, but the service road is more efficient because it segregates functionality and services cyclists. It is striking how consistently the Dutch roadways obey these design rules–in my time in The Netherlands so far, I have yet to see residences located on connecting roads. Service roads are fully shared by motorists and cyclists, so from the perspective of a cyclist, the most important design goal for service roads is to restrict the speed of the motorists. At the Zuidpoldersingel service road, there were several speed control devices in place: there were speed bumps on a regular basis, and the road itself was made of bumpy stone pavers. Another concern is that motorists may simply use the service roads as a second lane on the connecting road. To prevent this, the service roads are broken into short, disconnected segments–what we examined was only one segment out of many. However, the service roads are linked to each other by strips of of cycle track, so they provide full service to cyclists traveling along the connecting road and there is no need to provide separate cycling space. Overall, the service road system appears extremely well-thought out, and it functioned very well in my experience with it. 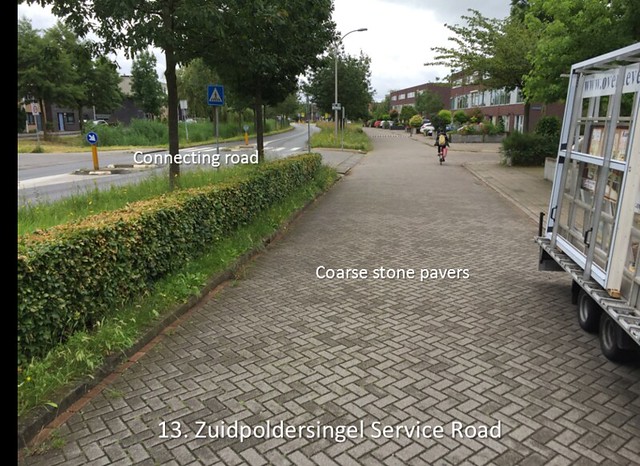 Bike highways are similar to their motorway counterparts: they have limited access, they have the capacity for a large volume of traffic at a high speed, and they generally do not directly connect to destinations. The experience of riding on a bike highway is special because cyclists enjoy generally uninterrupted service. Apart from yielding at one intersection, cyclists traveling the length of the 10-mile long N470 bike highway do not have to slow down or stop a single time. At its intersection with Zuidpoldersingel, the bike highway actually has the right of way and the crossing motor vehicles have to come to a full stop. At an earlier intersection, the highway gets uninterrupted service thanks to an underpass. For the most part, however, it simply passes through countryside alongside the N470, a major highway. Bike highways provide the safest, fastest, and most comfortable service of all bike infrastructure options we studied, and as such they are very attractive to potential cyclists. Providing cyclists with the ability to pass by crossing motorways without interruption may be disruptive, such as stopping crossing traffic, or costly, such as constructing an underpass. However, they generally travel through sparsely populated regions, and as such they are often less intrusive than cycle tracks at a similar cost of construction. 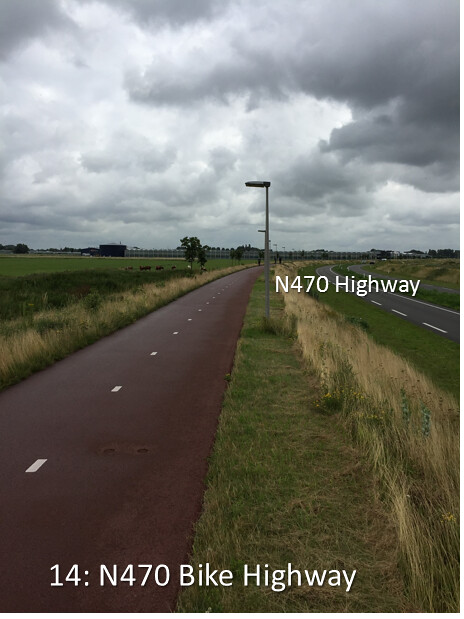