On July 4 and  July 5, our summer class in Netherlands has the tow-day tour to explore the city’s bicycling facilities. At first, I was totally  struggling with riding because the only experience for bike was when I was a child. Although, the city’s bicycle facilities were so well that almost every road we gone were totally separated, the bicyclists, drivers and pedestrians  had their own way to go. All the convenient service is owned to the traffic facilities.  Therefore,  I organized them for six sections, and the sequence is bike lanes, cycle track, bike boulevard, advisory lanes, service lanes and bike highway.

Bike lanes, or cycle lanes, are on-road lanes marked with paint dedicated to cycling and typically excluding all motorized traffic. This is an example with bike lane: 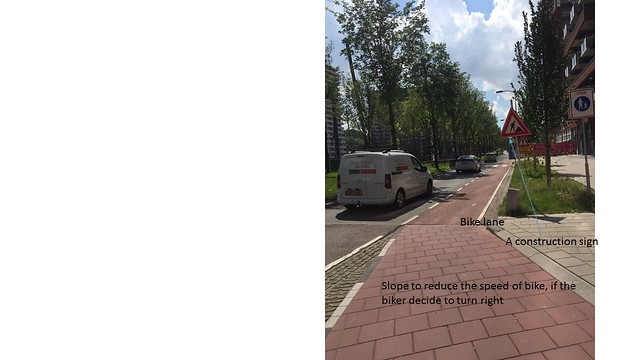 This road has a one-way bike lane on the right. It should be very safe if there do not have road works. And we can see from the picture that when biker turn right to the eastbound of the intersection, they will see that there has a construction work in progress. Hence, biker need to ride on the drive lane for a little while to pass the area. However, it is so dangerous that biker need to pay more attention to the cars behind him/her, so the risk of injure or crash will be increased. There is no space constraint in this road, the dash line can legally separate the car from bike lanes. Meanwhile, make the bike lane visually red would not cost too much,

Cycle track, a physically marked and separated lane dedicated for cycling that is on or directly adjacent to the roadway but typically excludes all motorized traffic with some sort of vertical barrier. It is divided to two types: one-way cycle track and two-way cycle track. Generally,  two-way cycle track can save more space than one-way and also more safety. 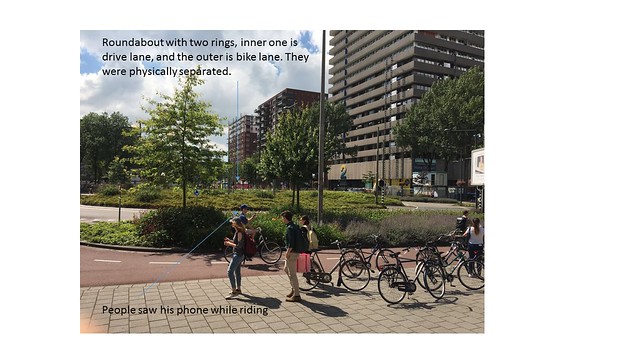 The facility type of this road is cycle tracks. And biking on the street is very safe because of the new roundabout. The two way cycle track and drive lanes are totally separated by the green space, each of the lanes can provide enough space for the user. People riding on the roundabout with slow speed (we can see from the picture, the biker watching his phone when he was riding). Even though there has the islands in each direction and pedestrians always yield with the bikes. No matter people choose what kind of transportation, the possibility of conflict is reduced and it is more safety than before. Rebuilding the roundabout must be very expensive than the sample cycle track, but the green space is useful to make the road artistic. 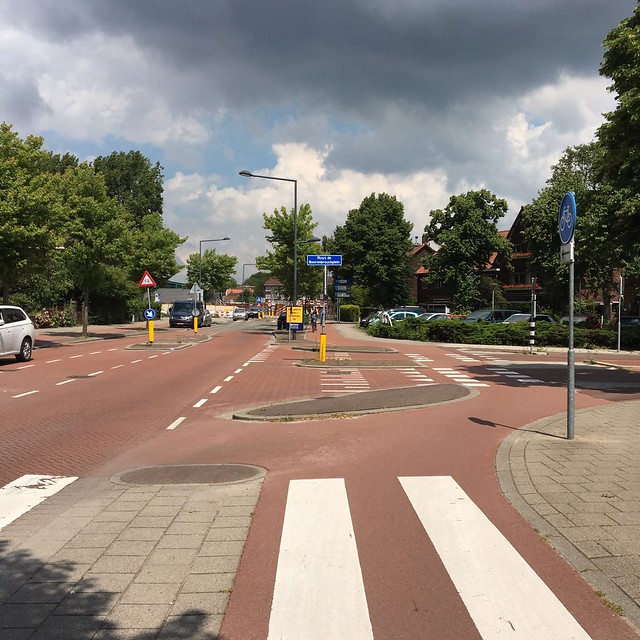 In this protected intersection, it has one-way cycle track in each directions, two-way drive lanes and parking lanes. The corner islands add a physical barrier between where cars will be traveling and where bikes will be riding in the cycle tracks. It was effective to let cars go through it and provide a good platform for bikes. This separation creates a more comfortable ride for bikers. Also it will reduce the risk of riding bike on busy streets. They help to make slight curves in the cycle track leading up to the stop line and signal light. It is safety for the biker and peds. It is inexpensive to build it but serves the purpose of yielding and increasing safety. Comparing to the traditional intersection, the space of cars is reduced because of the corner islands, however, the possibility of conflicts is also reduced with the physically isolate. 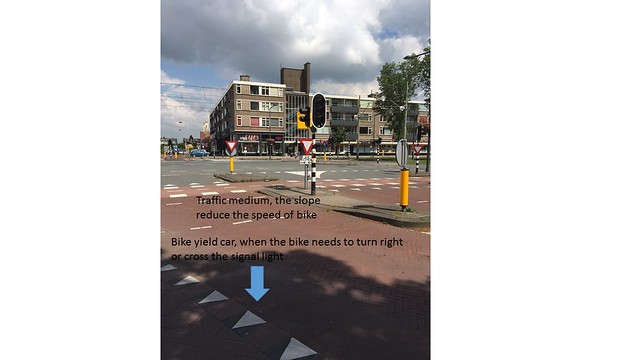 This has a typical cycle track in the road which makes the car yield the bike and bike yield the pedestrian. The shark tooth increases the road safety which provides people extra reaction time to make decision. For biker, they only yield the peds when they meet at the crosswalk, in case of the other people behind the biker will hesitate whether to stop or go. This mixed function road converted 2+2 to 1+1, so it gives more space for the biker and pedestrians, and also the newer road reduces the speed of cars. It is pretty cheap than the roundabout, but still expensive than the regular road, this traffic medium with signal light and signs would cost some money.

Bike boulevard, the purpose of bike blv is: 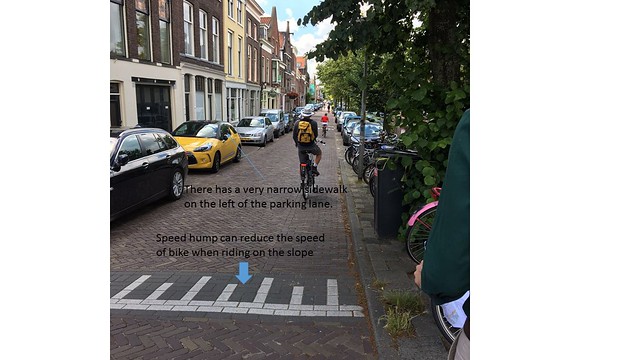 This has a bike boulevard in the mixed traffic road, two parking lanes, mixed traffic. In order to reduce the conflict when people ride bike on the slope, there has several speed humps to reduce the speed. It is inexpensive and very effective in reducing operating speeds and cut-through volumes. For the peds, the sidewalk is really narrow in this direction and they can walk on the other direction. For biker, they do not have too much stress because there has few car into the road, however, riding on bike blv especially the Buitenwatersloot would easily makes me lost way, it just like a puzzle that I need to search the Google Map. For driver, they need to slow down their pace when they drive in the road, and there has a question about how the fire track enters this road, it is too narrow to  put down the track ladder.  Meanwhile, it diversion from historic road, contraflow, so this road services the surrounding neighborhoods. Even though paving the bike boulevard would spend more money than the simple bike lanes, this road is one segment of the main road and people can go to the public transportation easily.

An advisory bike lane is a bike lane which motorists may legally encroach. Advisory bike lanes are often installed on low volume streets and in combination with a center line removal. These markings give bicyclists a space to ride, but are also available to motorists if space is needed to pass oncoming traffic. In this lanes, the faster car will yield the slower one, but not where cars from long queues, because the cars are stopped and bike needs yield the cars. 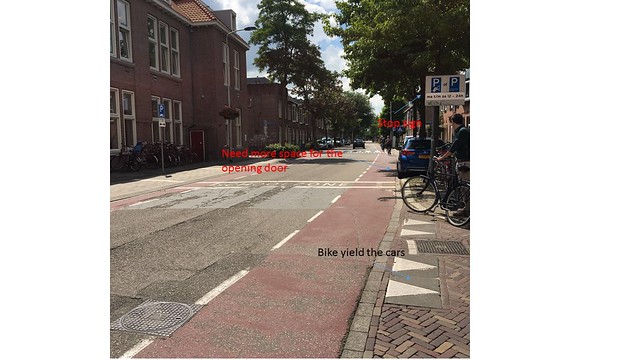 This has an advisory lanes in the middle of the road, and also has the one-way bike lane in each directions, and we can see from the picture that the road is pretty wide, even though there is no center line in the road, it still has enough space for the meet cars. The facility is inexpensive but serves the purpose of save space for the bike and car. Also, there has a stop sign in the right corner of the picture, stopped cars have not to occupy the traffic space and it also gives biker a message that there has a possibility of opening door. 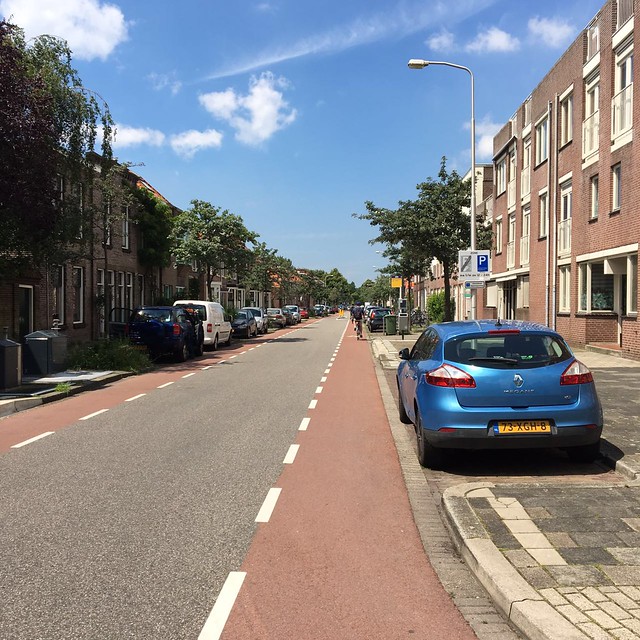 There has an advisory lanes and along with the one-way bike lanes in both direction and chicanes. It is dangerous in such narrow road when people ride to the car, the car’s door open and another coming car behind the biker will hurts him/her, so from my own point of view, this road needs to add a buff (about 2-3 ft) in each direction nearby the parking lanes, in case of the opening doors. However, for some other parts of the road, the signs and islands can protect biker and peds. Also, in the end of the road, this has a traffic cycle. It will block the straightaway, so that slowing traffic at the intersection of highest collision potential. In my point of view, advisory lanes is the cheapest way to separate the car and bike, it is very useful  and effective when apply to the narrow traffic way. 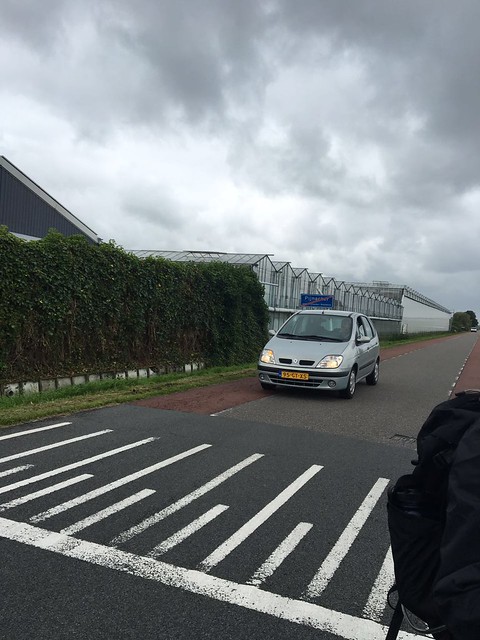 This rural road companies with an advisory lane and one-way bike lanes. And when two cars are meet at the advisory road and one of the car can drive to the advisory lane to across. We can see from the picture, if the driver wants to turn right and he notices that there is no biker and peds on the open road, he can definitely run on the straight right-side advisory lane. Besides, the volume of the road is very low, so when people riding or going cross the road they would be totally stress-free. Especially, people always walking on this rural local road. Above all, the environment is so nice, green houses,  flowers and fresh air can help the traveler keeping a good mood.

Service road is another way to provide low-stress bike along main road. And little traffic (so bike can be mixed) has slow speed. The service road should be built in the neighborhood in order to give the old people and kids a sense of security. 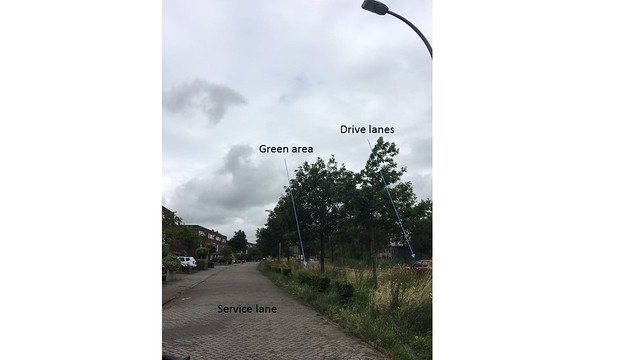 In the left segment of the intersection which connects the bike highway and residential area is a service road. The bike lanes are totally separated from the drive lane by the green area. However, paving the road is so expensive because part of the road has a bunch of speed humps. The speed hump is useful to control the speed of bike, but there has so many humps in every intersection of the neighborhood, it not convenient when riding on the road. On the other hand, it makes the local resident feel safety, especially for the old people who need more reaction time when they have the conflict with the bike.

Just like the car highway, bike highway is designed to provide a direct route, allow people riding with high speed, minimize the number of intersection and signal light which the bike needs to be stopped. 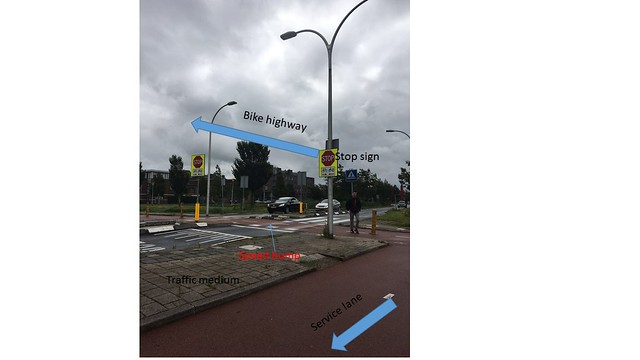 This bike highway is a main road that connect the way from west to east. We can learn from the stop sign that the bike has priority to cross the road. The bike track with red and islands also do the same work. The cars just have a very narrow way to go. However, the speed of the car is slow, the average speed of the road is very high because the drivers could not stop the car when they drive on the road, and they just keep going. For bikers, they just need to yield with the animal when they pass the green houses and farms. Rebuilding the road is very necessary, it not expensive compared with the regular highway. The capacity of the two-way travel lane is more than the old four lanes highway.