Biking on the bike boulevards was a calming experience. At stop 7, Buitenwatersloot, the one side for bikes had various features to aid in a feeling of security on your bike. Cars were only able to go one way on a narrow road, forcing them to go slow and pay close attention to the cyclists. At intersections, the cars are forced to slow down due to a raised crossing which gives the cars and bikes more time to notice one another and helps to regulate the cars speed throughout. Additionally, on both sides of the street, cars were parallel parked which provides another barrier of safety between the bikes and canal and bikes and pedestrians.  If the pedestrians wanted an even more stress free route, they could walk on the other side of the canal which was suggested for pedestrians only, allowing them to meander in the boulevard’s serenity.

Having one side suggested for pedestrians only takes away some space from the bikers and cars, though it allows for a lot more greenery lining the canal, secluding the houses on the path, and making the air more enjoyable to breath for everyone outside. The one way for cars makes it so some people may have to make a couple more turns before getting to their destination and it may slow down their travels with a low speed limit. However, it allows for a large amount of parking along the road, a more tranquil bike ride, and a more pleasant neighborhood the facility seems cheap to install as it only required changing the design in the bricks on the car side to define the parking spaces, sidewalk, and road,  raising the intersections, and with the pedestrian only side, a curb doesn’t have to be installed as the greenery designates where the side walk ends. 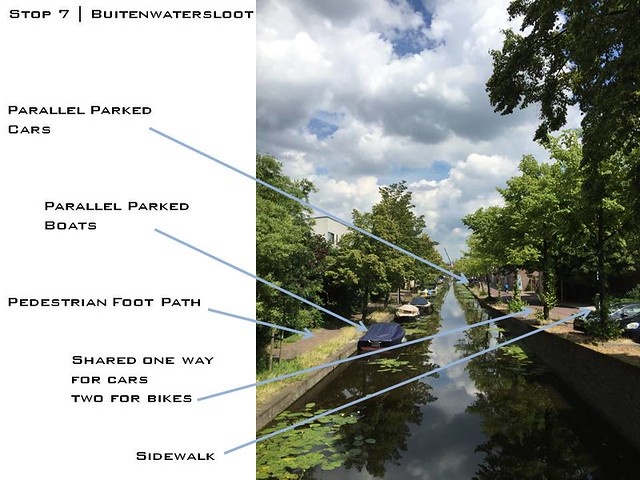 The cycle tracks effectively and safely separated the bicyclists from the other traffic. As can be seen at Ruys de Beerenbrouckstraat, the cycle track had two vertical barriers, the first about a foot in width separating it from the pedestrians and the second about two feet of bricks and curb separating it from the parked cars. This design allowed for all forms of traffic to be safely protected, even when there was a tram running down the center as seen at Papsouwselaan. The sidewalk was separated by a vertical barrier, trees and grass blocked the bike path from the car lanes, and greenery blocked the tram from the cars. This design was also seen on Voorhofdreef, although the tram was replaced with a large grass area with trees and bushes were the main barriers between the sidewalk, cycle track, and road. Additionally, the shark teeth easily tell the various modes of transportation who has the right of way helping to make the intersections a lot safer.

Going from Papsouwselaan to Voorhofdreef a roundabout was utilized to get all the various forms of traffic through. Based on where the shark teeth were painted it seems that bikes going around  received the highest priority followed by bikes entering, then the tram, followed by pedestrians, and cars  at the bottom. As this route had been converted from a 2+2 to a 1+1, cars had to give up a lane on each side, though it enabled more space to be given to the other traffic users and green space to be more prevalent. Cycle tracks seem to be quite costly as it requires barriers to be in place, space allocated for a track, laying of the track, and signals at intersections. 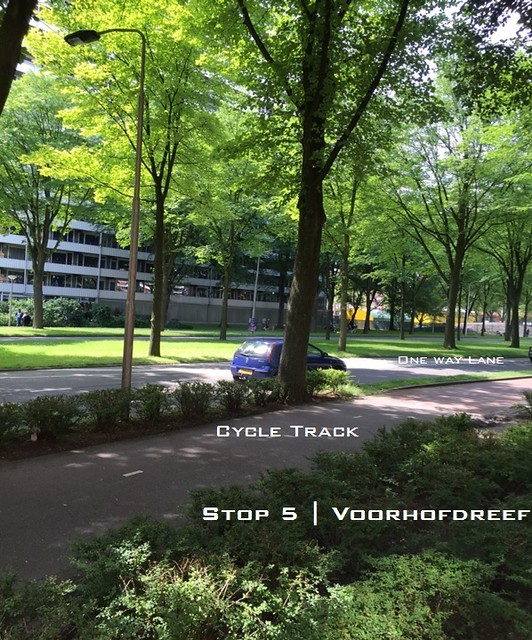 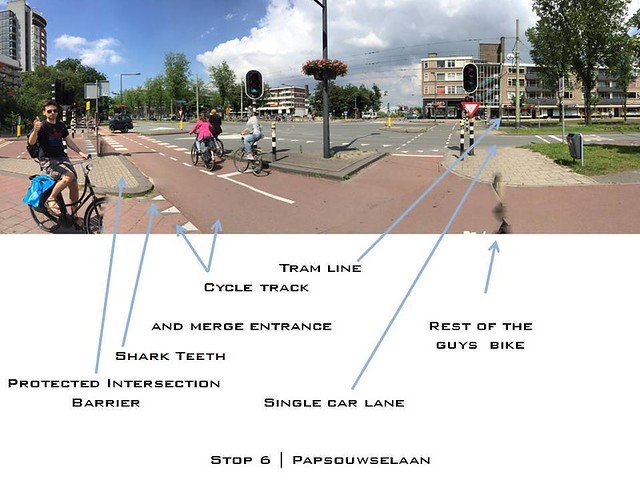 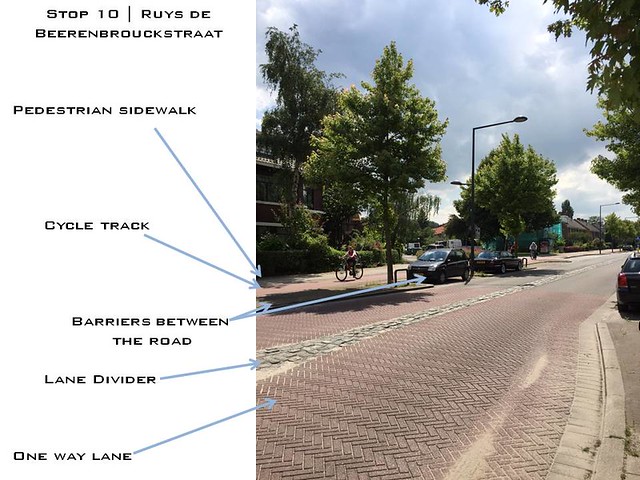 Unlike some may suspect, advisory lanes did not feel unsafe. Everyone riding them seemed to feel comfortable and biked in a relaxed manner, myself included. If a car and a bike were sharing the road they both had more than enough room to pass each other, even if it was two bikes and one car. The uncertaintity in safety arises from the potential for two cars going opposite ways and two bikes doing the same, though this just causes the two cars to wait for a couple of extra seconds and it didn’t seem The road was lined with a vertical brick barrier to distinguish it from the parking available on the side protecting pedestrians. Even if someone is strapping in a child into the back of a car with the car door open, it’s not an issue so long as you’re paying attention as there is plenty of room to ride around it. Additionally, even when an advisory switches from a 30 km/h to a 50 km/h, there are plenty of measures taken, such as sideways speed humps to drive the cars towards the center, a narrower lane, and a change from pavers to asphalt,  to make the cars and bikes aware this is occurring so they’re not surprised when it occurs.

With the advisory lanes it makes it hard for two cars to pass when there are bikes on either side of the road, but that minor inconvenience goes away as quickly as the bikes ride away. When I witnessed this occur, the bikes maintained their normal pace and didn’t seem too worried about it and no horns were honked which I feel would not be the case if this were to occur in Boston at the same moment. This may not seem like the best for a 50 km/h road, but as it’s been a local road for a while, the lack of width meant cycle tracks were not an option. Implementing this seems like it would not cost the city that much as it was paint that indicated it was an advisory road along with a couple of other small installations (sleeping police man and concrete tree planter for examples). 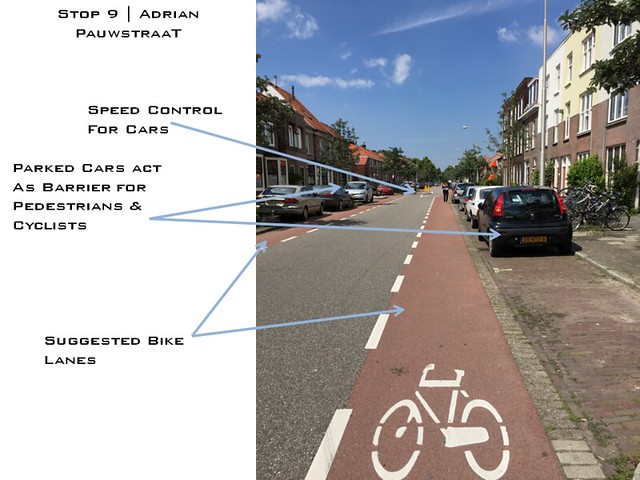 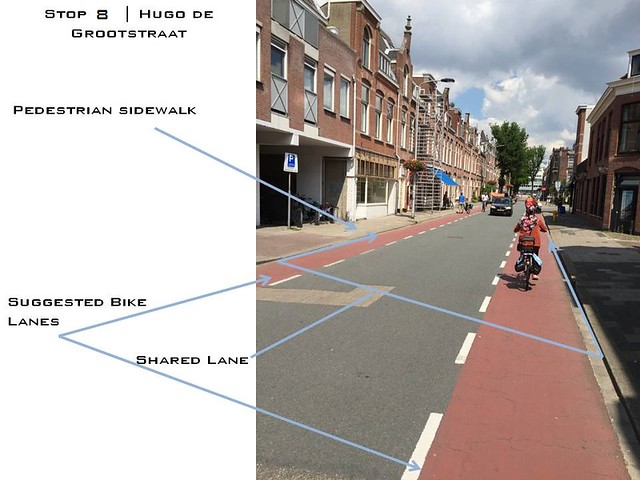 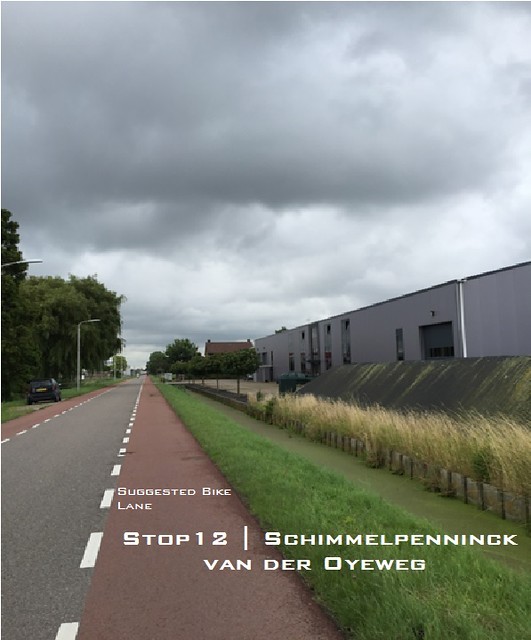 Not only does a service road give the biker a safer route, it also gives the children who want to play in their front yard a much more safe environment to do so. The destinations of the cars on these roads means there will be fewer speeding incidents I feel as the majority of those people live in that neighborhood and wouldn’t want to make their neighborhood unsafe. Additionally, the short distance of these roads ensure that car traffic will be low and which also means accidents on these roads should be low. However, if accidents do occur, between car and car or bike and car for examples, the potential for serious injury seems to be low as the speed limit of these roads are low at 30 km/ h.

The use of service roads may make it more difficult for some people to drive to other people’s houses that are close to them but not on their service road, though it also means those same people will live in a much nicer and quieter neighborhood. Various styles of pavers seemed to be used throughout these service roads, making them cost a bit more than a normal asphalt road. Although, I wonder if this way is possibly cheaper in the long term as they can be easily removed to access utilities and they seem to be less upkeep then maintaining an asphalt road that has to be constantly trenched and patched for utilities. 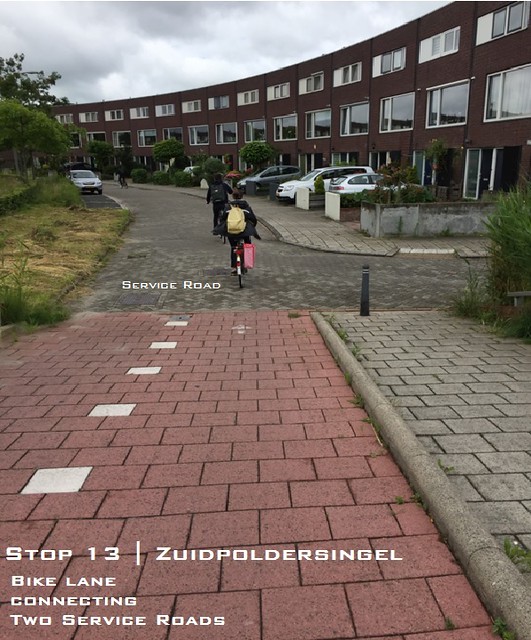 The bicycle highway was extremely pleasant to ride on. There was zero worries about dealing with cars, though mopeds were around, which allowed me to observe and take pleasure in the cows being cows and the greenhouses that passed into my sight. A car highway was running parallel for a period though the bike highway was well protected by about 20-30 ft of green space and a small hill. At the intersection with Delft’s main highway, measures were taken to ensure the cars give the bikes the right of way such as a raised crossing, narrower lanes forcing the cars to slow down, and signs placed on the side telling both biker and traveler to make eye contact to read what the other is going to do. This seemed to be the safest of all the road options as the bikes always had right of way which allowed you to ride nonstop for quite some time

Although this highway takes up a bit of land and forces Delft’s main highway to slow down a bit, even cause delays, it opens up a quick route for people who work along or close to the highway. It’s location may also make people more inclined to ride to work if they can as it is an calming aesthetic route which may put you in a good mood before or after work. Putting in the special fixtures in the intersection, making a tunnel under the highway, and paving/upkeep of that long a stretch of road must be quite pricey, though I’m sure a large amount of people utilize it for either work or leisure, making it well worth it. 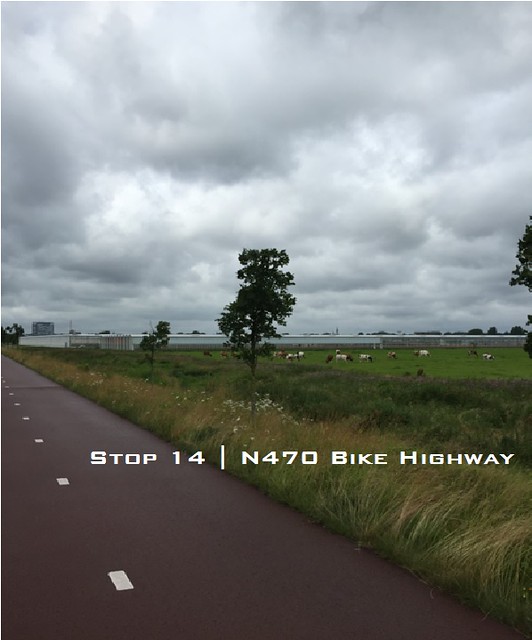