The Netherlands has a large network of bicycle paths, long and short, that stretch for many miles through cities and between cities. A classification of bicycle paths are known as bicycle highways. These paths are often wide, paved roadways for bicycles with little intersections and minimal crossings that provide fast routes between cities. While bicycle highways along roadways provide an easy and known route, these through roads do not necessarily follow roadways such that traditional one-way or two-way cycle paths do. Below is an analysis of the N470 bicycle highway in South Holland along with a possible proposed bicycle highway in the Greater Boston area.

The majority of the N470 bicycle highway is mapped out below, stretching from Pijnacker to the A4 highway. It stretched mostly along the N470 highway, but breaks off east of the large interchange with the A13 in order to keep the path separated from any areas extremely dense with highways. Throughout the cycle track, the lane width is approximately 5 feet in each direction with a relatively hard shoulder, allowing for large amounts of space while riding.

The qualities that define a bicycle highway are that it stretches for much longer distances than normal cycling infrastructure and is interrupted by intersections as few times as possible. Bicycle highways are directed at individuals traveling longer distances at high speeds – possibly competitive cyclists or commuters to name few. 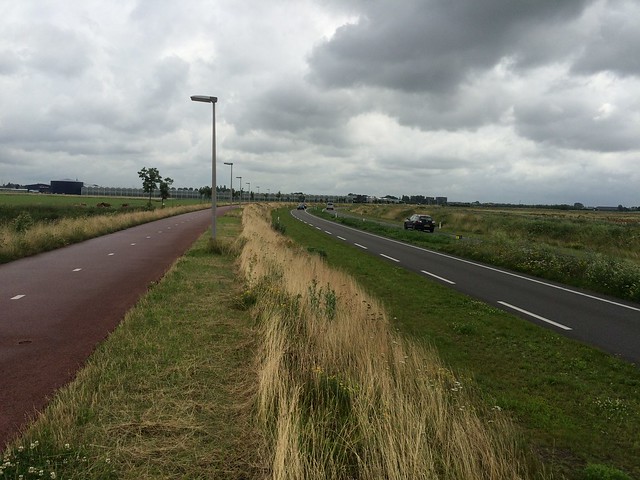 Pictured below is a section of the highway that is located close to businesses and possible conflicting traffic. As a solution, a fence has been installed to limit possible conflict areas while still maintaining a straight path and wide lane. 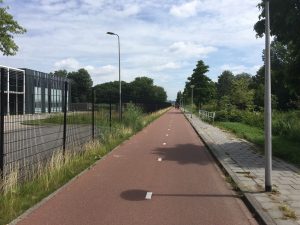 In older, possibly more historic areas, bicycle highways can also take the form of bicycle boulevards, low traffic streets where bicycles often have priority. In an older portion of the N470 corridor, in Southern Delft, the bicycle highway does cross one major road at a lighted crossing, pictured below. Once the trail crosses this road, the cyclists merge with slower moving traffic in an area where the ADT (Average Daily Travel) is approximately 2,000 or less. Along the N470 there is only one lighted crossing for bicycles and approximately 4 smaller interchanges in the historic section of the trail. These keeps consistent with the bicycle highway’s intentions of minimal interchanges and stoppages. 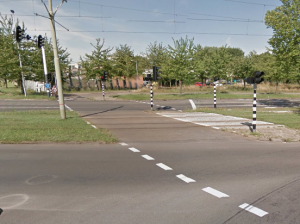 One of the interesting features of the highway was a unique type of speed hump designed for moped and bicycles, presumably in order to get them to slow down prior to crossing the nearby busy intersection. These speed reducing channels also have drains due to the lower-lying indentations they produce. 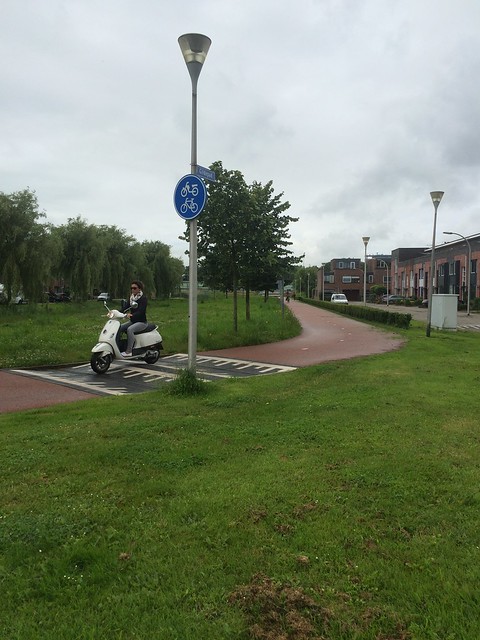 This underpass is one of the many features of the N470 bicycle highway that make cycling a quick and safe method transportation. While this bridge was quoted to our class as costing approximately $30 million, it serves as a large connection between Delft and Pijnacker. The extremely small incline and decline provides a smooth ride for travel and the intersection ramp provides time for cyclists to enter and exit with time to visibly see all traffic, even if moving at a fast pace. 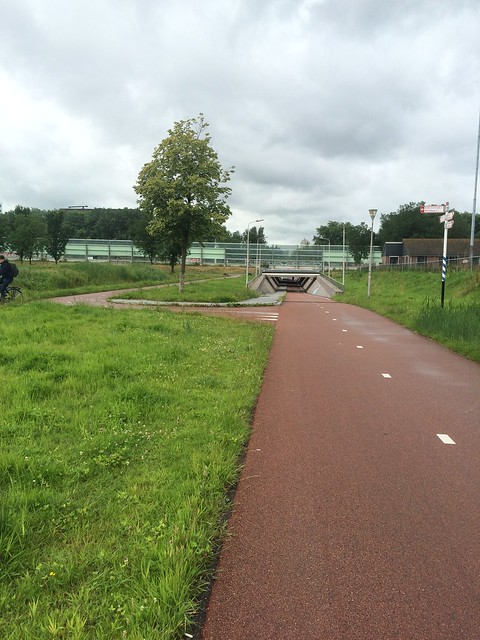 If there were to be a proposed bicycle highway in the Boston area, it would be planned in the Brookline and Longwood areas. This would provide a direct and pleasant commute for students and people who work in the Fenway and Back Bay area. It could also serve as a path for recreational cyclists to enjoy since the Emerald Necklace and Fenway parks do not have a path set aside for bicycles. The bicycle highway would be built along many of the already existing trails in the parks, since space next to the pedestrian walkways is readily available. An estimated ten foot wide paved bicycle path, approximately five feet in each direction that is consistent with Dutch trails, would stretch approximately 2.5 miles from Brookline into the Longwood medical area. The complex infrastructure that is necessary for success this project and the quality of the bicycle highway is mostly required at the crossings which are described in detail below. 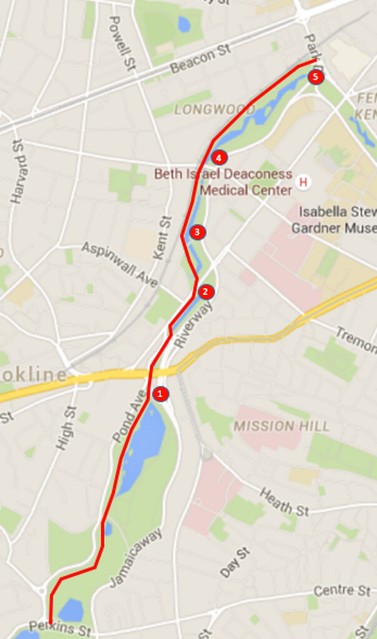 Below is the intersection of Pond Avenue and Washington Street in the Brookline neighborhood. Along the Emerald Necklace trail, there is a crossing for pedestrians east of the cyclist in this picture and before the bridge, but the cyclist does not have an appropriate crossing. A solution to this crossing could be a raised bridge over Washington Street for cyclists with a small incline stretching into the park, possibly attached to the Jamaicaway bridge pictured on the right.

As the Emerald Necklace trail approaches Brookline Avenue, there is a slight jog in the pedestrian walkway, west of the traffic in this picture. As a solution to this 2+2 roadway plus parking lane, an intersection would be created in which a traffic signal and bicycle signal would be added as the only bicycle stopping point along this bicycle highway. This was decided because of the close proximity to the proposed Washington Street bridge as well as the lower cost of a raised intersection and bicycle signal.

As a small park service road, a solution to this intersection is to ensure a visible line of sight for automobiles at a safe distance away and create a speed table that allows cyclists priority over cars that will yield at this intersection with a low ADT. Cyclists will then have little stress in crossing this intersection as priority will be distinguished through a raised crossing, colored path, sharks teeth yield arrows, and signage.

As Longwood Ave cuts through the park, there is currently an existing underpass for the Emerald Necklace trail that provides a safe alternative to crossing this roadway. We believe that the cheapest solution to crossing this road with the proposed bicycle highway would be to construct another tunnel next to the pedestrian one to allow a relatively flat crossing with low stress to the rider.

5 (End of trail at Park Drive)

As the wooded area of Longwood comes to an end along Park Drive, we propose that a northbound exit lane be added along the green line tracks under Park Drive. This would provide safe road crossing to the greenway on the northbound side of the street pictured below. As for southbound, the trail can merge with the southbound greenway trail pictured below to continue travel. These two trail extensions add connectivity and convenience to travelers along the proposed bicycle highway rather than abruptly stopping – a concept that makes many bicycle paths useless.