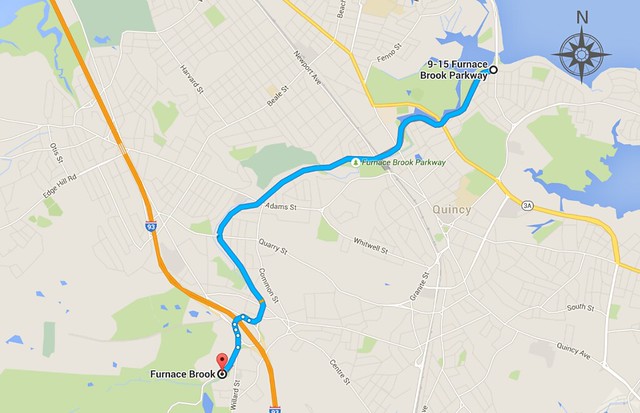 The bicycle route extends along the entirety of the Furnace Brook Parkway, from Quincy Shore Drive on the northeast end to the beginning of Wampatuck Road in the southwest, for approximately 3.0 miles.

Designed as part of the Metropolitan Park System of Greater Boston, the Furnace Brook Parkway began construction in 1904 and opened in 1916. The road was designed to follow Furnace Brook, which was originally proposed by Charles Eliot, a landscape architect who was deeply involved in the preservation of parks and historical places in Massachusetts. Originally intended for people to enjoy the natural beauty and parks of Quincy in addition to accommodating automobile traffic, the Furnace Brook Parkway is in need of redevelopment in order for it to better serve its original purpose.

The majority of the road is bordered by parks, small forests, the Furnace Brook river, and Blacks Creek estuary to the west and homes to the east. However, there are many large sections where both sides of the route are bordered by privately owned residential and some commercial properties. At the north end of the Furnace Brook Parkway, roads branch off to the Quincy Shore and other beaches in the area for cyclists traveling from the south. The south end of the parkway has an easy connection to the entrance of Quincy Quarries, a popular climbing destination, and continues on to the Blue Hills, another popular recreation area. Midway on the route is Bernazzani Elementary School, so a safe cycling route on this street would possibly enable some children the freedom to bike to school. Various shops and connections to dozens of different residential areas also exist along the the Furnace Brook Parkway.

North end of route along forest and residential properties 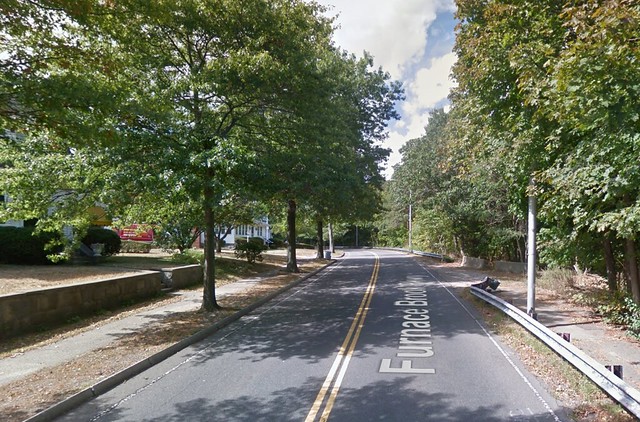 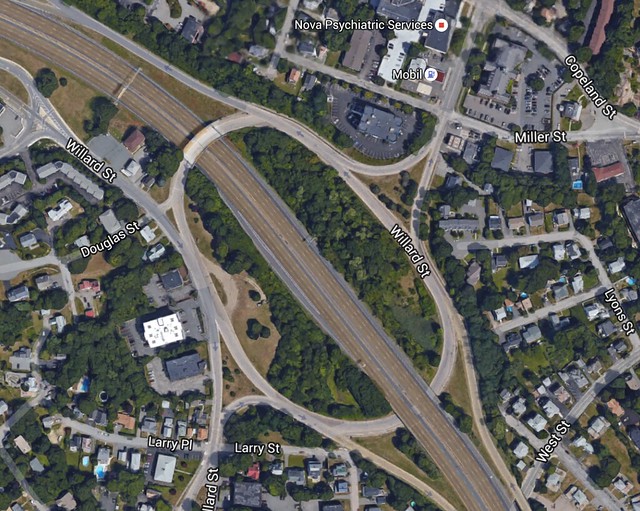 In order for a stress-free bicycle crossing to exist at this highway interchange, it would have to be completely redesigned with roundabouts on each side and an underpass. 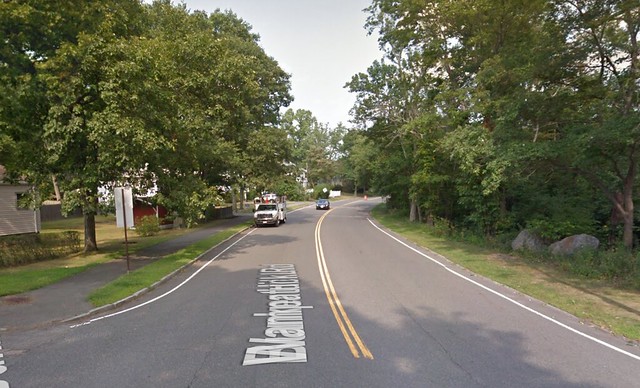 For most of the route south of I-93, residential properties border both sides of the road, making separated cycle paths an unlikely option.

Typical traffic at 8 AM on a Wednesday

The current functions of Furnace Brook Parkway is to carry traffic to homes and other desirable destinations, such as the Blue Hills and Quincy Quarries on the southern end and the Quincy Shore on the northern end. The map above  shows traffic patterns at 8 AM on a Wednesday; green means no traffic and orange means medium traffic. This shows some areas with medium traffic, mostly at intersections. .  The function of this road should be to continue acting as a connection for cars, while also accommodating for bike and pedestrian traffic. Furnace Brook Parkway should have a safe bike route because of the destinations and landscape on this road. This roadway is split between residential areas and parks, so a bike route would allow people to commute to work or go on a nice bike ride through the parks—children could even bike to the elementary school. Additionally, since this road follows a brook it is very flat and has few intersections to one side, which makes for an even more enjoyable bike ride. These functions are compatible with one another—cars can get to destinations along this road directly and not have to worry about encountering bikes if there’s complete separation. This road is currently not functional for bicyclists or safe for pedestrians; there are no bikes facilities, and while there are sidewalks for pedestrians, the intersections lack protection. By Dutch standards, our redesigned road is considered a thru street. We would keep the speed the same since there will be separation between bikes and cars. Much like Ruys de Beerenbroukstraat, it allows car traffic to flow through while also having separate facilities for bikes and safe crossings for pedestrians. Our only traffic calming device will be speed tables at intersections so bikes and pedestrians are visible.

The biggest design challenges we face on this road while converting it to a more bike and pedestrian friendly route are space constraints, complete lack of bike facilities, and the roundabout at I-93. Bikes are currently unable to travel safely since there is no space for them—not even painted bike lanes. We must work with the space provided to incorporate a pedestrian sidewalk, 1+1 car lane, and a protected bike lane. The narrowest parts of the road, which are north of 3A along the woods, measure to be about 30’ across. There’s not enough room for a cycle track to be built off of this, so other accommodations will have to be made. The roundabout at I-93 needs to be redesigned since it’s currently 1100’ across in the largest part—it feels more like the driver is on an entrance ramp to the highway than on a parkway in a residential area. This road was originally designed to be a parkway system, but gained more traffic as homes were built on it and I-93 passed through it; the main challenge is to get Furnace Brook Parkway to feel like a parkway again.

Make Furnace Brook Parkway an effective through-road for cars that is also bicycle-friendly and stress free. 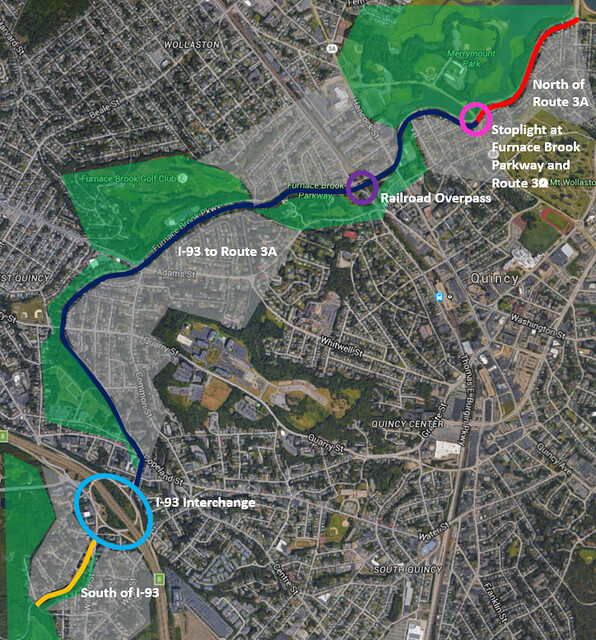 The new Furnace Brook Parkway design is split into 5 different zones: South of I-93, the I-93 Interchange, I-93 to Route 3A, the Railroad overpass, and North of Route 3A. The stoplight at Furnace Brook Parkway and Route 3A is being redesigned to incorporate a bicycle traffic light. The green shading represents where there are trees/parks, and the grey represents residences. Each of the following headings have a color corresponding to the map above.

Starting from the southern end of Furnace Brook Parkway, the road varies between 35- and 45-feet in the area leading up to I-93. A simple one plus one road design with a center line provides an easy set up for our roadway while maintaining speeds and separating cyclists. A vertical concrete divider provide protection from a 10-foot cycle path while a lamp post provides protection for pedestrians walking along the sidewalk which many houses line. A raised concrete barrier will also be added for car protection. For the portion of Furnace Brook Parkway south of I-93, the whole cycle path will be located on the eastern half of the road. 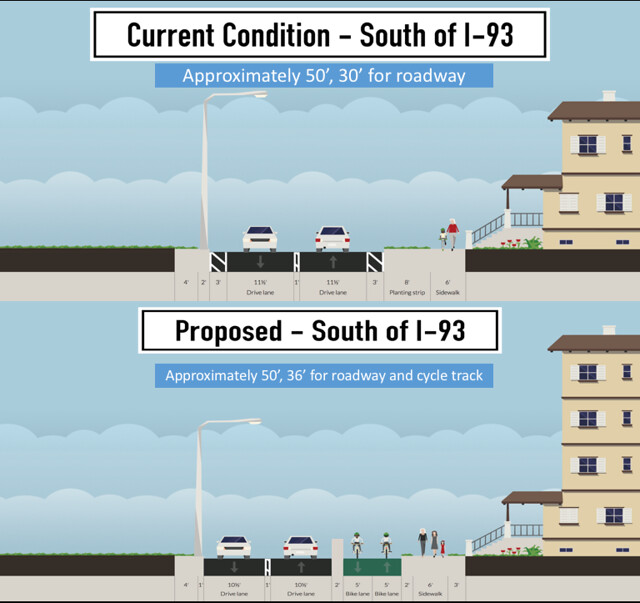 Roundabout Design for I-93 Crossing

As Furnace Brook Parkway approaches the I-93 interchange, the current design has an extremely large rotary, a diameter of 1,100-feet in its widest, with both an overpass and then underpass around I-93 to give traffic entrance and exit ramps. As a team, our proposed solution to this complicated and large intersection would require two turbo roundabouts, each with corresponding entrances and exits, creating a barbell-like design. This was decided on after reviewing multiple Dutch interstate entrances and exits, specifically in Papendrecht, in which multiple roundabouts were used to keep traffic slow, yet continuously moving through interstate crossings. As cars approach the intersection, speed limits in all directions will be reduced to 20 mph, parallel with the common 30 km/h roundabout design in The Netherlands. The example of this in Holland has a diameter of approximately 240-feet, while the space available on either side of I-93 is approximately 500-feet without major displacement of the surroundings.

This image depicts the current areal view, as well as entrance into the Rotary from the northern edge. 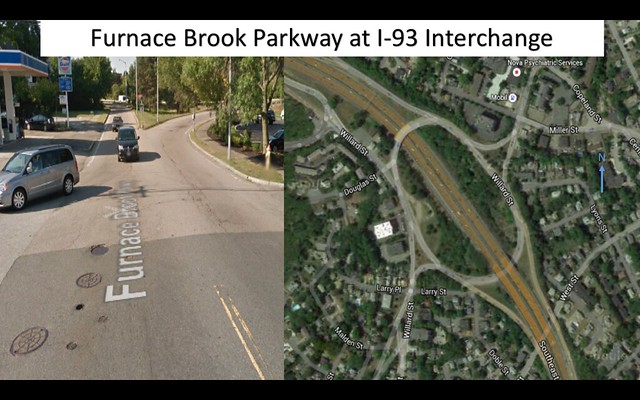 The two images below depict an example of a barbell interchange in Papendrecht and Maasluis West, both in The Netherlands. 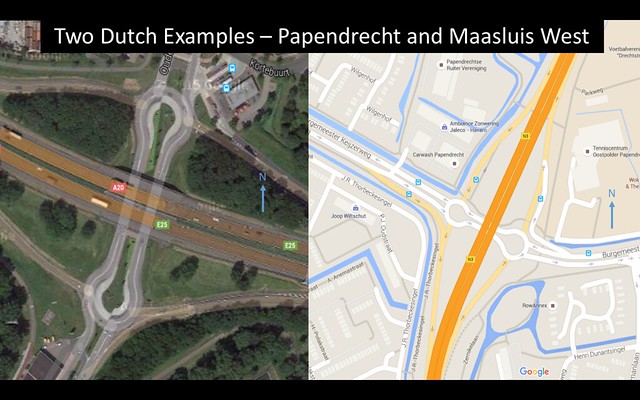 The following is a the final roadway design that we propose for this section of Furnace Brook Parkway. The areas in blue are roadways that have been removed and are now replaced with the barbell interchange. The red path is the proposed separated bicycle path, which will also travel underneath I-93. Refuge islands will also be used in order to limit clearance time for cyclists and pedestrians, as they will only have to cross one lane at a time. For all areas north of I-93, the cycle path will be located on the western edge of the road. 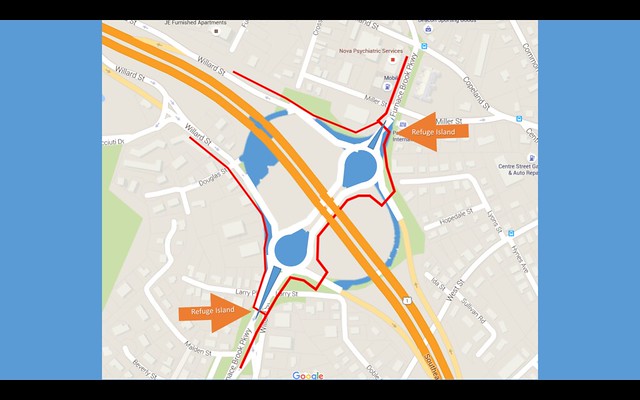 After crossing I-93, Furnace Brook Parkway widens slightly until the railroad crossing. With slightly varying road widths, a 35-foot wide street would be appropriate for automobile traffic along with proper separated bicycle paths. A 4-foot tree barrier between the bicycles and automobiles allows sufficient protection and security for riders as horizontal and vertical separation are both implemented. For areas with houses, there will be a 16-foot buffer of sidewalk, grass, and trees to keep parallel the current condition of houses far off the roadway. 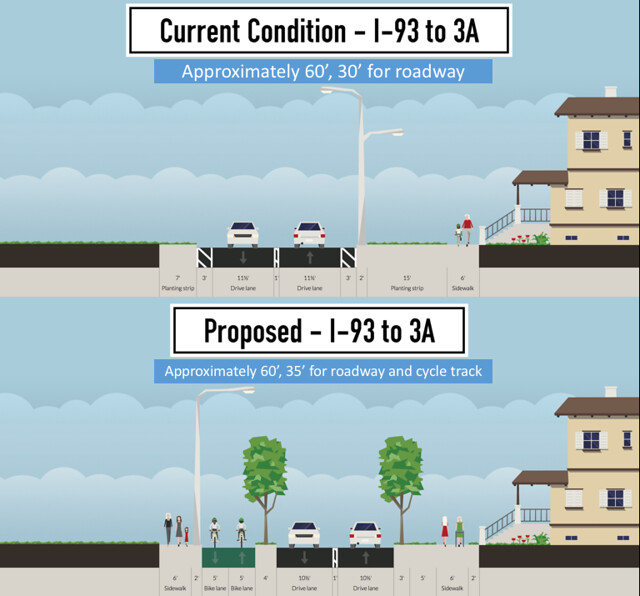 To prevent the underpass of Furnace Brook Parkway beneath the railroad from being widened and to incorporate protected bike lanes, we chose to leave the smaller sidewalk on the eastern edge of the road. On the west-side, there will be a 5-foot wide sidewalk with a light fixture to provide more visibility at night. Also, on the west-side will be a two-way cycle track, 5.5-foot width in each direction, separated from cars by a wall and from people by a light post. 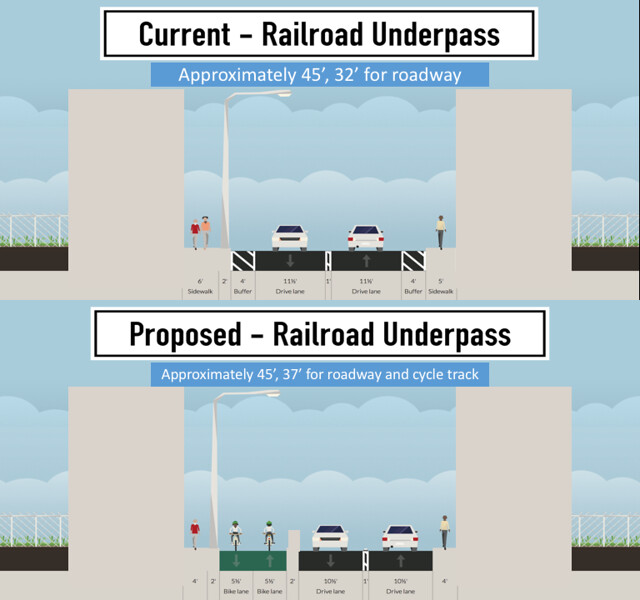 North of Route 3A

At the section of Furnace Brook Parkway north of Route 3A, a 10-foot wide cycle track will be installed. Because the roadway varies between 30- and 40-feet, we have decided to separate the roadway and bicycle paths completely, placing the bicycle path within the park. To minimize costs of reconstruction, the guardrail already there will be used as a physical barrier between the cars and the bikers. However, at each entrance to a neighborhood, there will be a break in the guardrail in order for the bikers to enter and exit the cycle track. Light poles will also be installed along the bicycle path. While this design creates a larger spread of traffic, the scenic route through the park will provide a leisurely and almost stress-free ride for all bicyclists. The second photo below shows where the cycle track will be placed 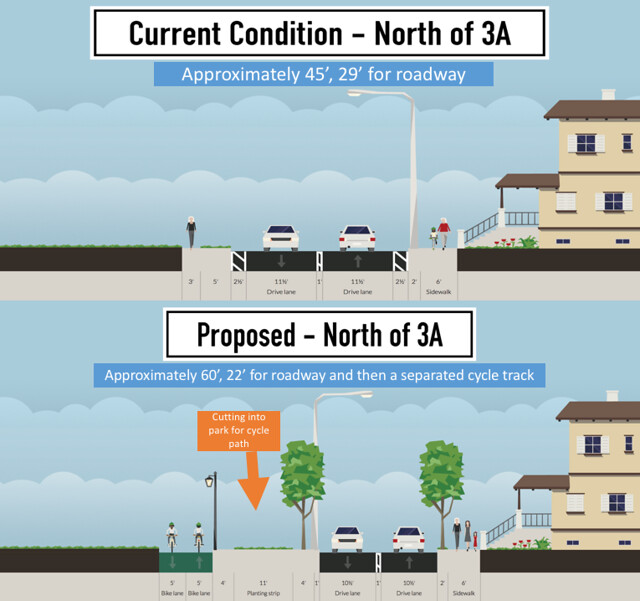 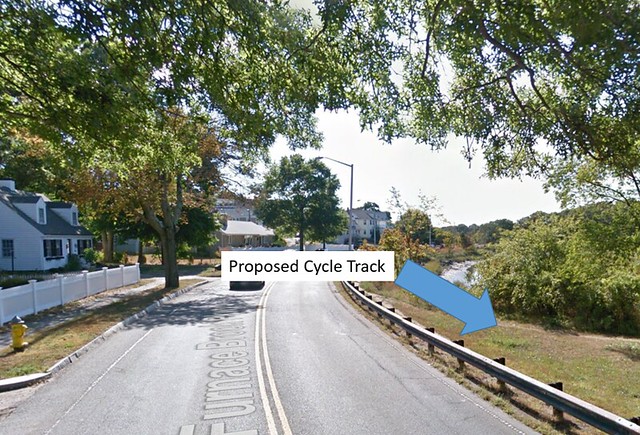 Stoplight Intersection at Route 3A

At the intersection of Furnace Brook Parkway, bicycle traffic lights will be installed and the traffic pattern for cars will be changed. Bikes traveling along Furnace Brook Parkway will have a green bulb when the cars do, and bikes traveling along Route 3A will have a one when the cars do. However, there will be no left turns allowed unless there is a green turn arrow. There is already a separated left-turn lane on Furnace Brook so traffic won’t back up due to the change in traffic light pattern. By having a left turn arrow, this protects bikers from cars trying to hurry through the left turn and right-of-way is given, not inferred. Further, the right turn of southbound traffic at this intersection will also be a protected green arrow, consistent with the left turn arrow of northbound travel.

At each neighborhood where the protected bike lane is across the street, a 7-foot crossing island will be placed in the center so that the bikers and pedestrians only have to worry about crossing one lane of traffic at a time in order to get to the cycle track. As a further measure to keep speeds low at these intersections, the lanes will pinch to 9.5-feet so there will be room for the crossing island. This will help our overall aim to create a safe environment for bikers along this stretch of road. 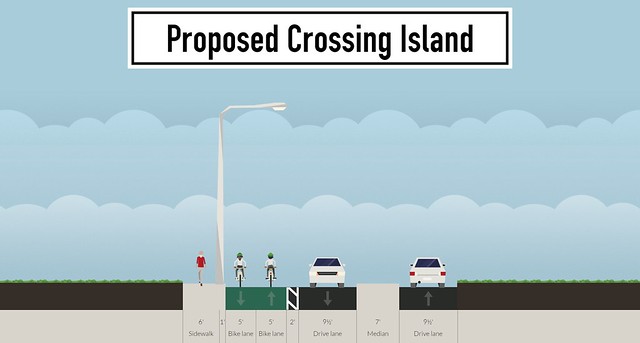