Courtesy streets are meant to lessen through traffic and slow speeds in areas where there are homes, parked cars on the street, no lanes, bikers sharing the street, and unmarked pedestrian crossings. These areas are meant to carry traffic of no more than 30 kph.

Courtesy streets appeal to a driver’s natural discomfort in tight spaces. These roads are narrow, two way, with no lanes dividing different directions of moving traffic or dividing parked cars and moving traffic. Oftentimes, the width of the travel space is around 10-12 feet wide, which is just barely enough for two cars to pass each other, but plenty of space for a car and a bike, or a car and a pedestrian to share the road.

Because of the lack of lanes, drivers and cyclists often travel directly in the middle of the road. When another car comes towards them head on, one or both drivers feels compelled to pull closer to the side of the street, letting the other pass, or allowing both cars to move very slowly and carefully past each other. 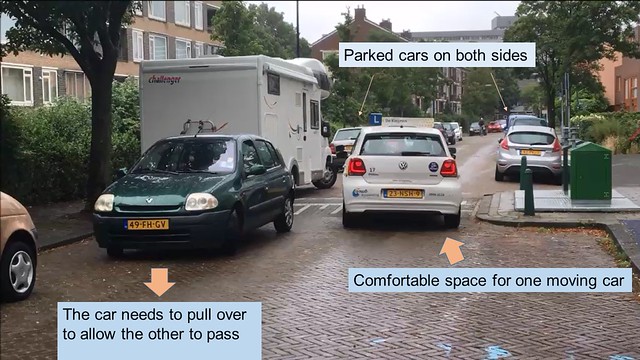 Parked cars also appeal to this discomfort. When there are parked cars on either side of the street, drivers are even more cautious, because hitting a car mirror has harsher consequences than bumping into a curb. In the case of a 11 foot travel lane and parked cars on either side, moving cars often pull into an available parking spot or move out into a wider section of the road (sometimes an intersection approach), in order to allow the other car to pass. Courtesy streets are have at least one side with parked cars.

These courtesy street encounters can slow traffic in one direction to a complete and temporary stop, or drastically slow down traffic in both directions. Encounters like these are not favorable for fast moving uninterrupted traffic, and thus cars looking for through routes would avoid courtesy streets.

3. Treatment Performance and the Principles of Systematic Safety:

These streets are meant for access, primarily of homes. The turnover rate for parking is relatively high because on street parking is reserved for all residents in the neighborhood. Sometimes there are also businesses and schools in the area, which add to the needed spaces for parking. This means there is a lot of pedestrian crossings at any location on the street, when people are walking from their cars to their destination.

Courtesy roads are designed for this. There is parking on the street, allowing for access. This parking also compels drivers to slow down, because of the possibility of oncoming traffic or cars pulling out. The slow traffic speeds allow all to access their destinations safely.

Because there are a lot of slower moving, smaller vehicles sharing this street with cars, and people entering the road at any point and not just intersections, larger vehicles such as cars or vans are expected to move at most at a speed of 30 kph. This speed limit is not enforced by signs but rather, the driver’s cautionary behavior when driving through a narrow road with obstacles on either side, and possible oncoming traffic.

Cars know that the street is primarily made for accessing destinations. They can see the parking lane, and know that there may be people parking or leaving, or people entering or exiting their cars. They also know that because there is no one way sign, and that cars are parked facing either direction, that the road is two way. Thus, when driving down the street, they are aware of the possibility of a car starting to drive towards them. The lack of centerline tells the driver that other cars may be travelling in the middle of the lane, and that it is allowed to do so.

4. How does the courtesy street function to achieve speed control:

This video shows how courtesy streets are applied. 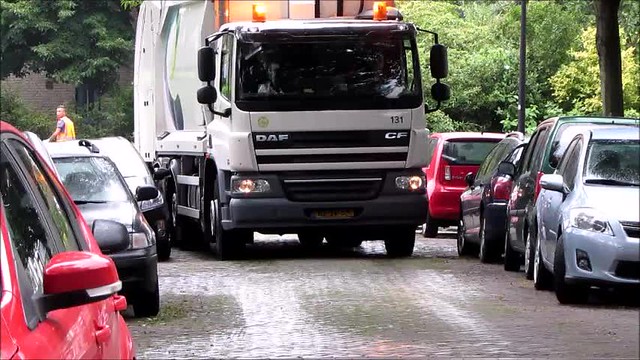