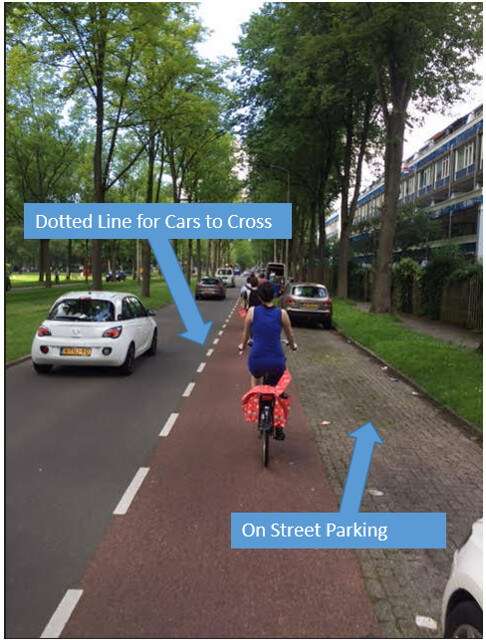 The first stop we visited with bike lanes was Buitenhofdreef and Martinus Nijhoflaan, which were arterial roads with one lane in each direction. These streets included one way bike lanes on each side, with car parking to the right of the rider. There was also a greenway between the driving lanes of this road. By way of safety, there is a threat of being doored by a driver exiting their parked vehicle, although this seems less likely in the Netherlands than in the U.S. The intersection of these roads from Martinus to Buitenhofdreef also separates the rider between two car lanes, and the broken lines allows drivers to pass into the bike lane. The design benefits by allowing those that live in the apartment to park near their homes, while still allowing bikes and cars to travel at a decent traffic flow. The greenway also gives the street a park-like vibe. Although there was not much traffic, these features make the ride slightly less safe than other routes. This facility is relatively inexpensive since most of it includes only paint marks. 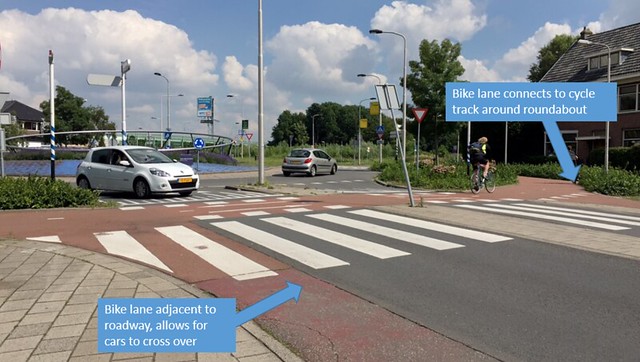 The second stop we visited with bike lanes was Nassaulaan, which consisted of a road with a lane in each direction and a one way bike lane on each side. The bike lanes are between street parking and the driving lanes, and there is a dotted line between the driving lanes and bike lanes allowing cars to pass over. Part of the road was a school zone which allowed bike riders space across the entire width of the road for an isolated section. At the end of this street was a roundabout, where the bike lanes connected to a separated cycle track around it, providing more protection for the rider. The design benefits by allowing drivers to park close to the shops, homes and school along the road, while allowing the flow of car and bike traffic to continue uninhibited. The bike lanes were an inexpensive option, and were probably implemented because there was not enough room to expand the roadway to have cycle tracks and a driving lane in each direction. 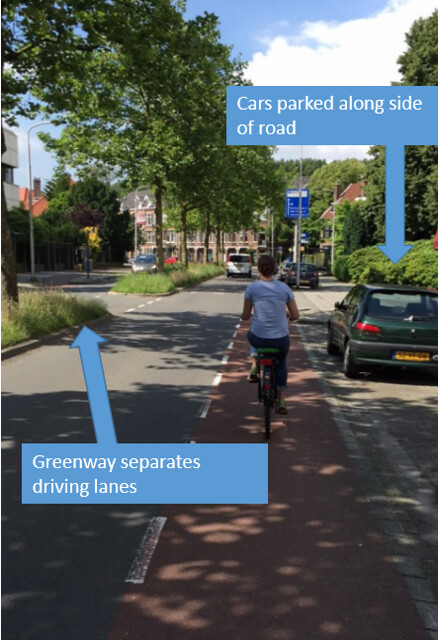 Julianalaan consisted of a one plus one arterial road separated by a greenway, with some breaks for cars and bikes to cross over.  Along each side of the road was a one way unprotected bike lane with a dotted line so that cars could cross over and park along the road. The ride down most of Julianalaan felt safe, despite the relatively high level of traffic. The design benefited by having a nice median that also allowed for cars and bikes to cross over at several locations. It also had similar benefits to the other streets with bike lanes, especially Buitenhofdreef. However the intersection between Nassaulaan and Julianalaan was somewhat confusing, and required the rider to move to a one of two bike lanes between driving lanes, depending on the direction of their turn. I personally found this intersection to be one of the trickiest to navigate during our first tour. The intersection on this street was most likely cheaper to design and construct than a roundabout, and for those accustomed to area probably easy to use and serves the intended purpose. 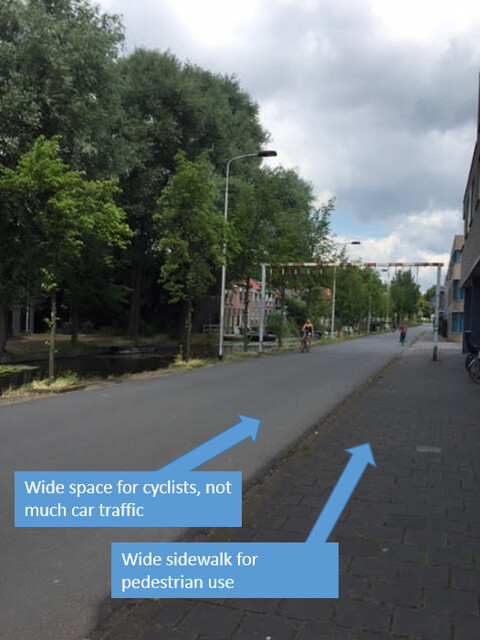 This bike boulevard was wide and had plenty of room for cyclists traveling in both directions since it was only being used by a few cars. There were many bike riders along this road, which probably means that it is convenient and easily accessible. Historically, as an old road used by horses to pull boats up the canal, this road now serves as an additional route since a main through-way, that travels the same direction, was constructed for bike traffic. It only has enough space for one car and a bike or two to pass, so it is less likely that drivers will take this route over the newer and wider road. This road was probably inexpensive to construct, since it was merely retrofitted from an old historic road, and did not need to clear much space. This design serves as a useful road that can predominantly be used by bikes. 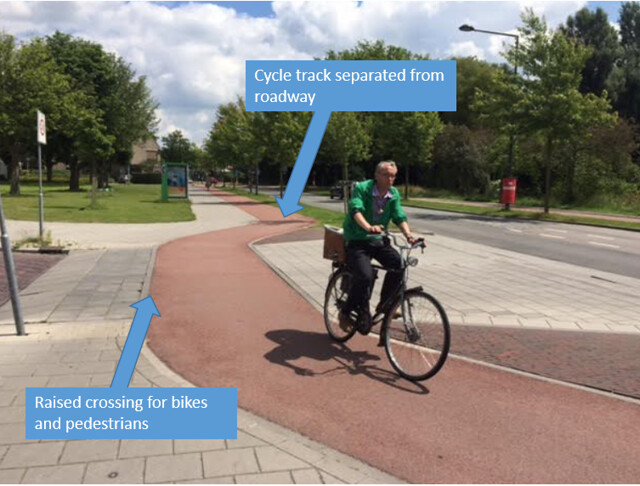 This street consisted of one way cycle tracks on each side of one plus one road. This road was highly safe since the tracks were separated from the road by a significant barrier. There was also a raised crossing for the cycle track and sidewalk entering into a supermarket parking lot. This crossing was offset from the road, allowing cars to turn in one care length without coming in contact with pedestrians or bike riders. The design of this road benefits by allowing cyclists and pedestrians to travel significantly offset from the road and provides a brick median between each travel lane. There are also specific on street parking spots for cars and racks to lock bikes. This road design was probably more expensive to construct than simple bike lanes, but is probably more appropriate to this area, since this appears to be a residential neighborhood with mostly homes. 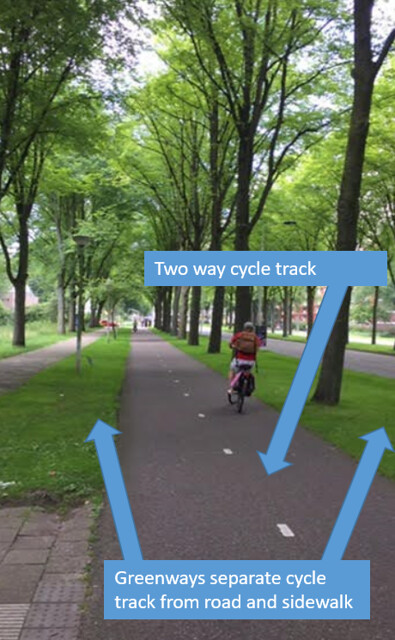 This street consisted of two driving lanes separated by a greenway, a two way cycle track separated from the road on each side by a grassy median and a pedestrian sidewalk separated from the cycle path by another grassy median. This road was very safe and easy to use since it separated all forms of transportation and allowed for bike riders to travel in both directions. This road had was particularly wide with a lot of greenway, and therefore allowed for each route to be separated well making it very safe for all users. The large roundabout in the middle is also well planned for cyclists and pedestrians, as there is clearly marked directions and crossings for them, and allows for people traveling in either direction. This design was likely quite costly since it takes up a great deal of space, but it allows all forms of traffic to be safely separated and with so much room can most likely accommodate heavy traffic. 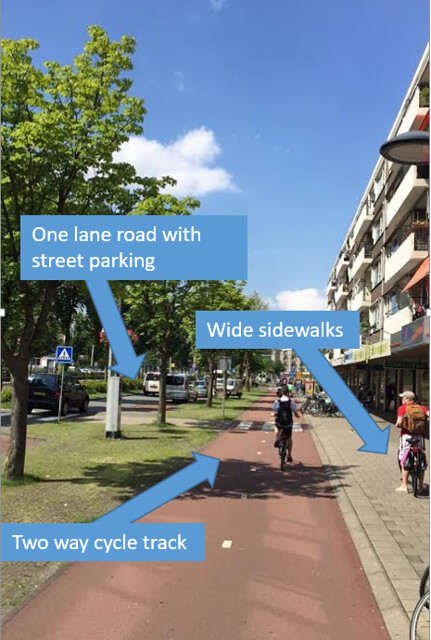 Despite having to accommodating cars, trams, cyclists and pedestrians, Papsouwselaan is surprisingly easy to navigate along and cross when necessary. At around midday, the street was busy and had a mixed variety of users. People crossing the road on foot had to make several stops, but a walk light at each crossing made the process fairly effortless. Likewise, sharks teeth and signals made crossing by bicycle easy as well. Having a separate lane for street helped to clear up possible congestion. The road having been retrofitted from a previous design of a two lane road in each direction, to a one lane road, cleared up a great deal of room for the cycle tracks, street parking and wide sidewalks. The combinations of crossing light signals and two way cycle paths on each side of the road was likely an expensive design to implement, but it seems necessary in order to coordinate the high amounts of mixed use traffic along this road. 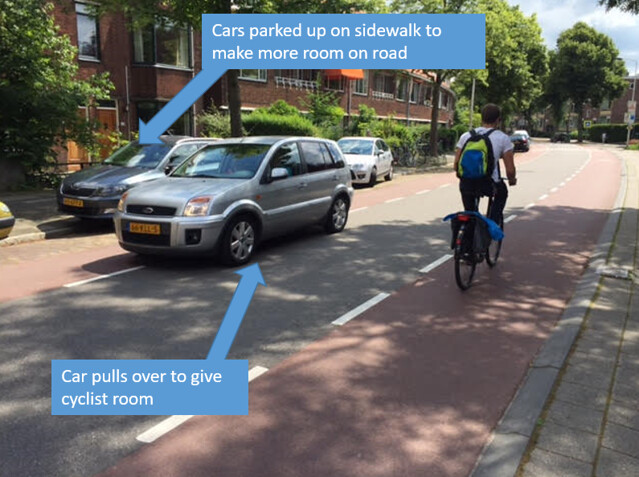 The advisory lanes along these two roads were interesting to observe, since there was quite a bit of congestion at the time. A truck pulled over and was making a delivery while cars and bicycles were attempting to move around it, which caused a decent amount of backup. As this is somewhat common on roads with advisory lanes, the drivers and bike riders responded logically and sorted it out patiently. The design for this road benefits the riders in that it allows them the ability to travel on each side of the road, while posing somewhat of a challenge for drivers who have to be more alert. These advisory lanes are relatively inexpensive since they take up less road area and require only paint. 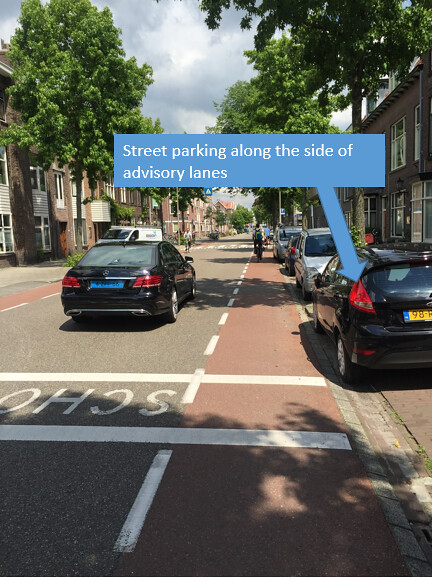 The advisory lanes along this road were similar to the nearby two advisory lane roads, except that it has on street parking on both sides. This makes the situation slightly more challenging for riders and drivers, since cars pulling in and out of spaces add another element to watch out for. However, the parking is relatively convenient for the people living in the homes adjacent to the road. The space in this area is relatively limited without moving the sidewalks back, therefore the design is good for this street since it allows for parking, sidewalks, bike lanes and car traffic in each direction. Like before, this bike facility is relatively cheap since it takes less area off the road and requires mostly just paint.

These two streets were quite busy with car traffic and a few cyclists at the time we rode on them around noon. Crossing Kerkweg to turn around took a good amount of wait time, and watching for traffic was critical. Since the houses along this road were close together and looked to be a close-knit neighborhood, it makes sense for there to be sizeable sidewalks and a road that limits traffic usage. The road adjoined canals which would make widening the road difficult to do, so the advisory lanes make sense for this location. The expense of these roads would also be less than other road design options. 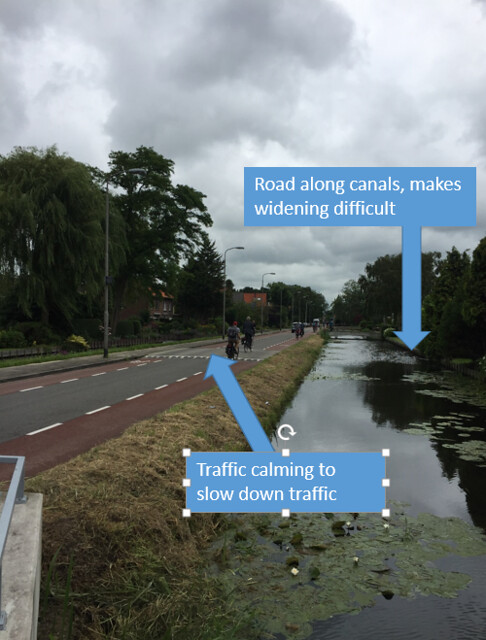 The bike highway consisted of a two way bike path that ran along the highway. This is very safe for bike riders and car drivers since there is a significant separation between the two. In some parts, the paths cannot be seen from the highway due to walls or raised grassy areas. Since this is along a highway it is a recent cycle path and has much more free space to be built, therefore the design can be more adaptable than in an urban area. As a result of this, the paths were easy to follow and ride along. These cycle paths are relatively inexpensive since they do not require a great amount of coordination with other traffic systems and consist of mainly just extra pavement.