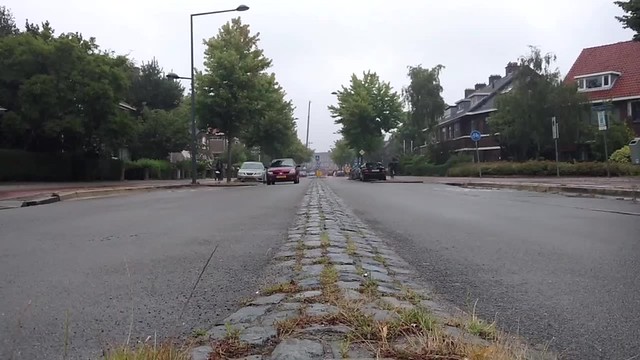 The following maps show streets where narrow lanes with crossable barriers are implemented in The Netherlands.

The main objectives of narrow lanes with crossable dividers are to control speeds while still allowing enough room on the road for buses, trucks, and emergency vehicles. Crossable barriers can be raised bricks, pavers, or even just painted bricks. An example of a road with a crossable barrier can be seen in Figure 3 below. 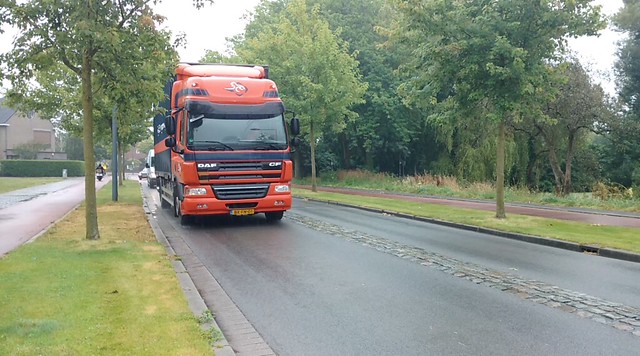 The objective relates to systematic safety concepts because it defines the functionality of the roadway. Typically, roads are classified as either local, connectors, or highways. In instances where a crossable barrier is needed, however, the road acts as a connector but has residences along it. The problem therefore is that vehicles seek to use the road at higher speeds in order to get to their final destination, but the target speed for a local roadway with home fronts should be around 25 mph. Crossable barriers are a solution that allows for the hybrid use of the roadway as a through street but only at a slow speed due to the high volume of local pedestrian and bicycle traffic.

Ruys de Beerenbrouckstraat in Delft, the Netherlands, was recently reconstructed to include narrow lane widths and a crossable barrier in the middle made of raised bricks.  Ruys de Beerenbrouckstraat has the problem of carrying through traffic in a residential area. While residents of the street want slow car speeds for a more livable environment, buses, trucks, and emergency vehicles still need to be able to travel into and out of Delft along Ruys de Beerenbrouckstraat. Residents also want to be able to easily access the Albert Hein grocery store. With one way cycle tracks on either side of the roadway, safe crossings were a priority for both bicyclists and pedestrians. Motor vehicles traveling at lower speeds help make these crossings safer.

Laan Van Sion located in Rijswijk, the Netherlands is an example of a residential street that borders a new housing development. While it doesn’t act as a through street like Ruys de Beerenbrouckstraat, residents still wanted low speeds to create a safe environment for their children to play in.

Narrowing the lanes with a crossable barrier provides an appropriate treatment for the site by restricting car speed with less pavement available to them while still allowing larger vehicles to travel, crossing over the barrier if needed. Delft could not have implemented a non crossable barrier in place of the crossable barrier because of the clear space required for fire trucks and other oversized vehicles. This treatment, paired with crossing islands, resulted in lower vehicle speeds and eliminated the need for two signalized intersections. These intersections were put in place specifically for safer pedestrian crossings, but now are no longer needed.

In both locations mentioned above, this treatment works well to meet its objectives. Cars travel closer to the target speed of the road than they would if there was no crossable barrier. On Ruys de Beerenbrouckstraat, the roadway still acts as a connector between the highway and Delft, but a speed limit of 40 km/hr is physically enforced by the design of the road.