In my opinion, bike lanes are on the more dangerous side of the facilities listed on this webpage because they have no buffer zone between them and the cars. Figure 1 shows a three lane roadway with a pocket bike lane. Because the bike lane continues straight, it is assumed it has right of way and the car has to slow down and check to make sure it is clear to cross to the right turn lane. The depth of a right turn lane must be short in order to keep the bike lane safe during the crossover because the short length of the turn lane will make cars approach the turn at a slower speed. This style is also one of the more inexpensive types because the lanes just need to be painted on, no other construction needed. This can sometimes work for historical areas if the roadway is wide enough that it can be cut down to make room for a 4′ minimum bike lane. 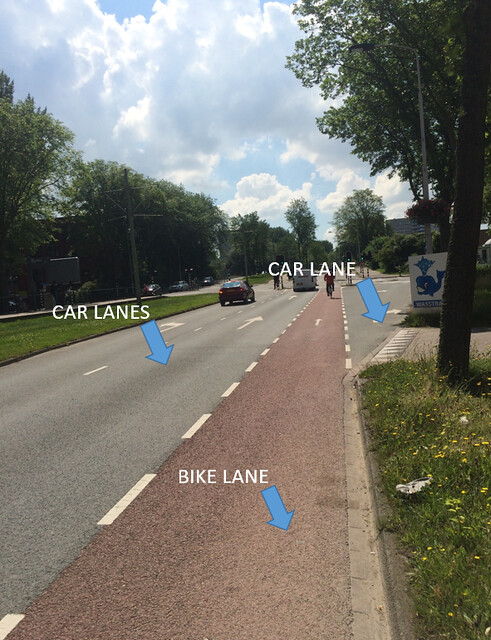 The bike boulevards feel safe because the roadway is closed off to all traffic but buses and bikes. Figure 2 shows a bus sluice in the middle of the roadway. The sluice prevents cars from traveling down that road because they are too small to get over the sluice, but buses are taller and have the ability to lower the sluice so that they can easily pass over it. Figure 2A shows the location of the bike boulevard and how it is shown on Google Maps. Figure 2B shows a traffic calming measure, a raised intersection, to keep speeds low and safer for pedestrians and bikers on this section of the road. This type of facility is good for historic areas because it does not require the construction of any additional facilities, which makes it inexpensive. 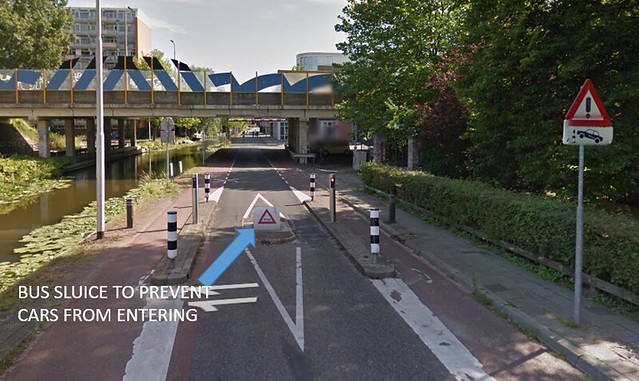 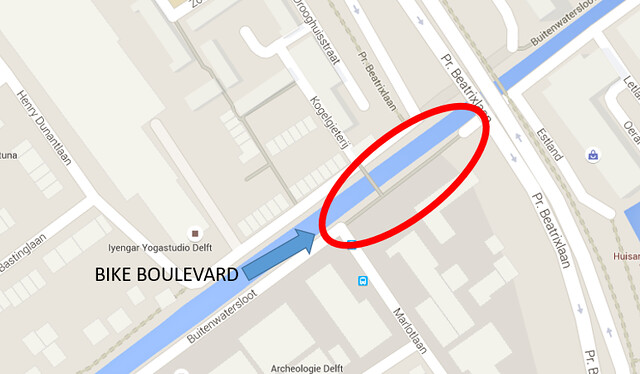 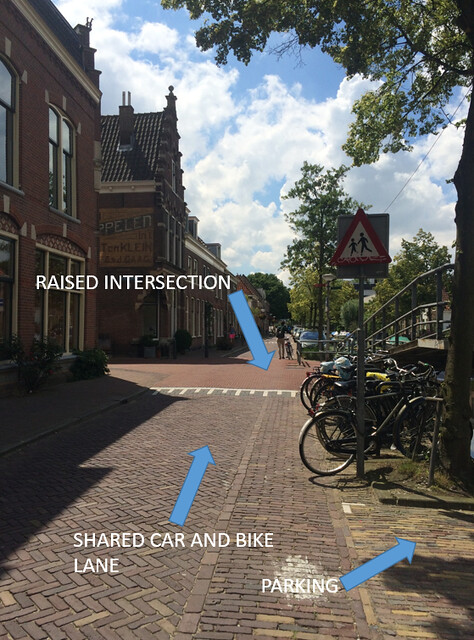 Cycle tracks provide security for the bike riders because they are physically separated from roads by grass or a vertical object. These types of tracks are more expensive than bike paths or advisory lanes because new pavement must be laid down for their construction. Cycle tracks would not work well in a historic area because they are space consuming and would cause buildings to be knocked down if they were to be implemented. 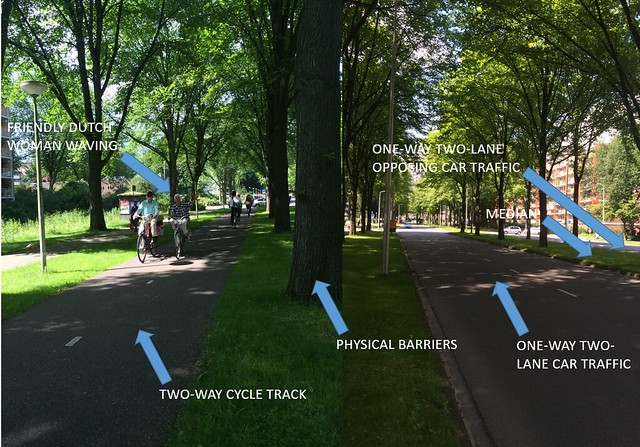 The cycle track in Figure 4 is two way because Papsouwselaan is a commercial street with businesses on both sides. This road also sees a high volume of cars so it would be dangerous to continuously have bikes crossing over the road. 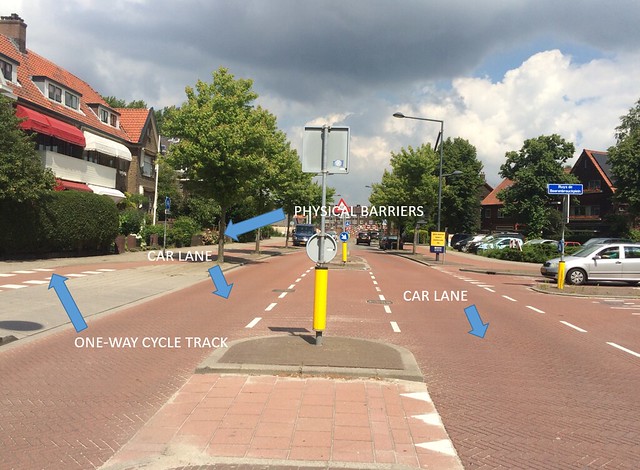 Opposite of Papsouwselaan, Ruys de Beerenbrouckstraat is a low volume street so one way cycle tracks work well.

An advisory lane consists of a bike lane and a car lane where the car lane typically does not meet the minimum width. This facility feels less safe compared to cycle tracks or bike lanes because a car is forced to share the same lane as a biker when opposing traffic presents itself. However, this style is works well where space is limited. The advisory lanes are painted red with a white dashed line on the edge. The red hints that a car should not ride in the lane and should stay in the gray pavement area. However, the white dashed lines indicate that a car can cross over into the advisory lane when oncoming traffic is coming. This type of bike infrastructure is relatively cheap because it can just be painted on an already existing road instead of new pavement having to be laid out. 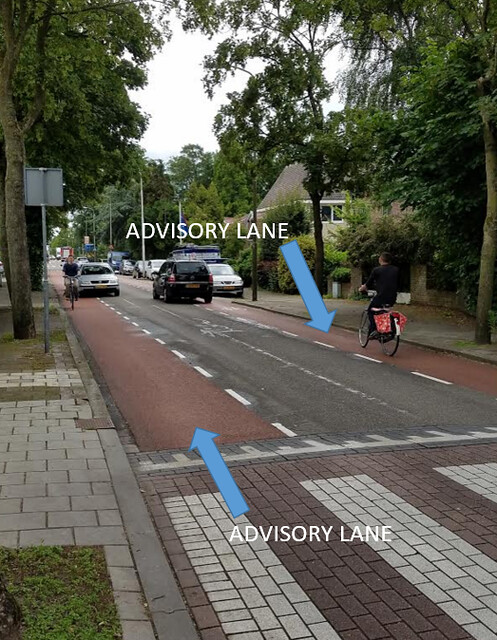 Two cars are passing each other while bikers are present. Because there is a biker in the left advisory lane, the grey car slows down and waits until the black car goes past before it goes around the biker. 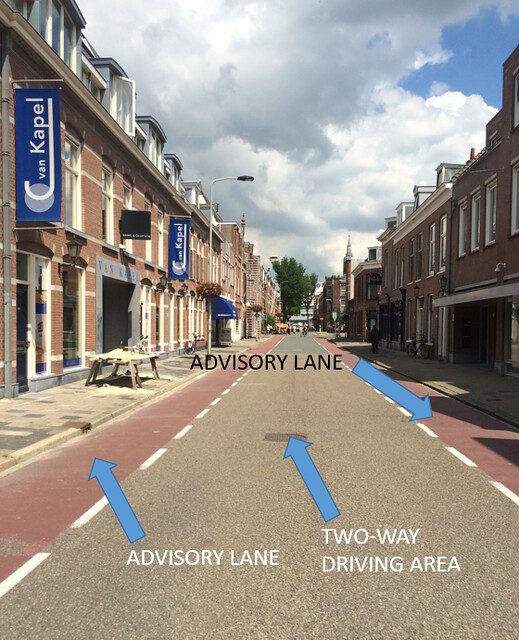 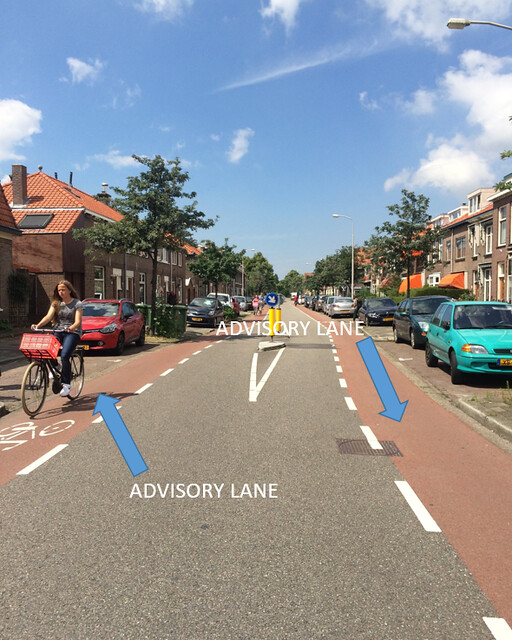 Cars are forced to go into the advisory lanes here in order to provide a pedestrian refuge in the middle of the street. 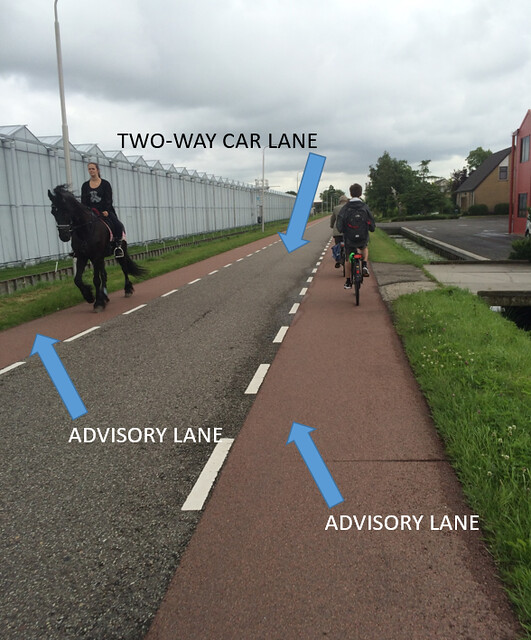 (Figure 9. Bikes don’t only have to share their lane with cars and mopeds)

Overall the service road felt safe. The bikes were on a wide path that was not shared by cars other than those coming out of their residences. The speed was also kept at a lower rate because speed bumps were placed frequently along the service road. A service road is beneficial for residential areas because the sidewalks are separated from busy roads and the bikes and mopeds are kept at a low speed limit because of the speed bumps. However, to keep cars from using the service road as another lane, the service road was broken up by a bike path for at least 50′ as seen in Figure 10. Figure 11 shows a speed hump implemented for traffic calming. 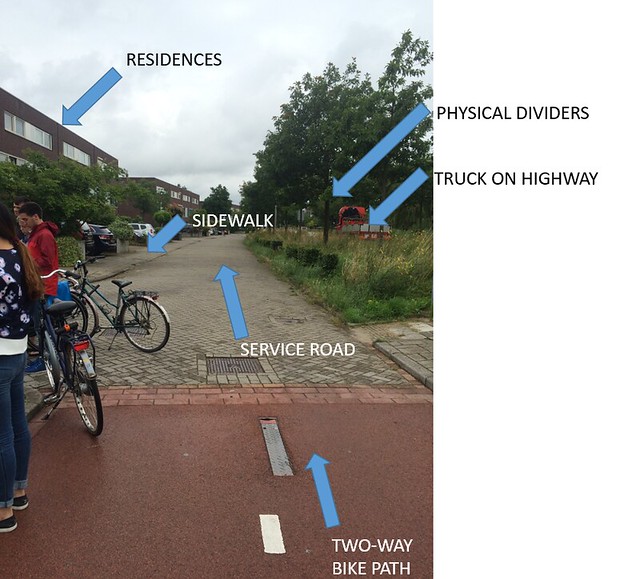 The service road runs parallel to the main highway. 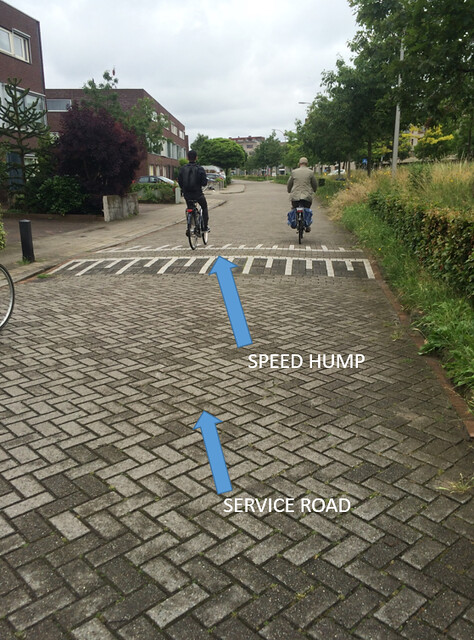 The speed hump keeps traffic slow without slowing down the cyclist.

Biking on the highway felt very safe. The cycle tracks were separated from the cars by grass and the pavement was very smooth which made for easy traveling. There were minimal intersections which made getting from Point A to Point B efficient and at the few intersections, the bicycle had right of way. The relative cost of this facility I think would be high because a new cycle track would need to be laid down separate from the road. However, I don’t think the bike highway would be as efficient or safe if it wasn’t separated from the road. Cars wouldn’t go as fast which defeats the purpose of this highway. For the cycle track, there is a green space and physical divider to separate the bicyclists from the cars. The tall grass is on an embankment and not pictured are white bollards that are frequently placed alongside the car highway which also provides protection if a bike were to roll down the hill. 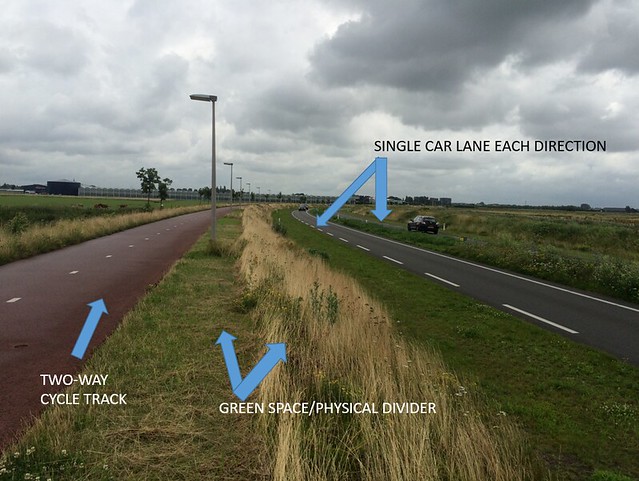