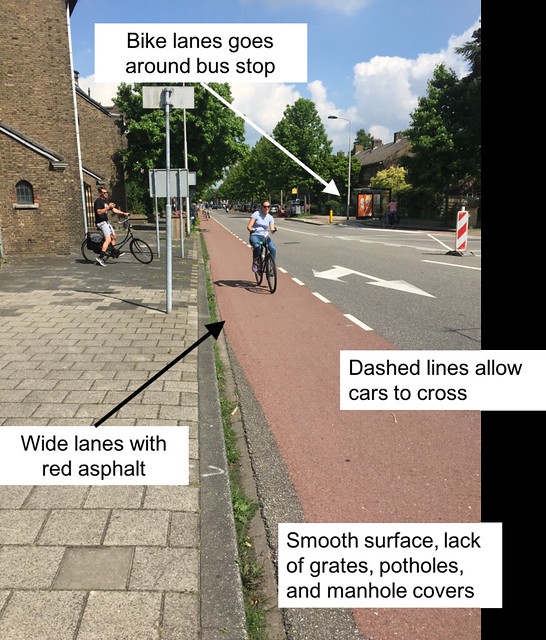 For this road, the municipality decided to install bike lanes adjacent to a lane of traffic. For most of the street, only one side has parking but at one point the two bike lanes vanish to allow parking on both sides of the street. The bike lanes are wide and use red asphalt to give the cyclists a more defensible space. The red asphalt also provides a noticeable visual effect for cars and pedestrians, putting the thoughts into their heads that red asphalt means bicycle. Also, the bike lanes were noticeably smooth because there was an absence of utilities, potholes, and grit so common on American bike lanes. The cycle lanes also went around the bus stop instead of in front of it in order to prevent cyclists having to pass on the roadway around the bus. For the most part Nassaulaan is stress-free cycling because of the slow-moving traffic. However, the exception to this is the segment where the bike lanes disappear and the cyclists and the vehicles integrate. Luckily, this is for a very short period of time. Overall, this facility appears to be an inexpensive yet very safe and comfortable for the cyclist. 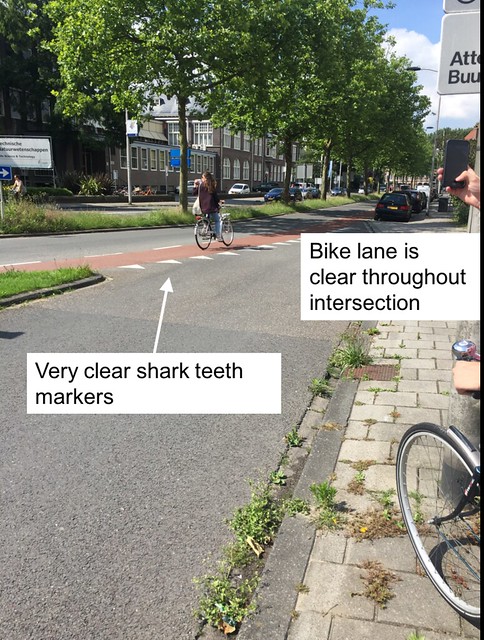 The municipality decided to install bike lanes on this 1+1 lane roadway. The road layout is as follows: parking, bike lane, lane of traffic, median, lane of traffic, bike lane, and parking. The traffic on the roadway is modestly busy and travels not too fast. There could have been cycle tracks on this road, but it appears as if the municipality sacrificed cycle tracks for a large median with mature trees. As a cyclist, the road felt safe at most points, but there were some exceptions. At some straight segments, vehicles were traveling quickly and as a cyclist I felt some stress. The bike lanes seem like a relatively inexpensive solution to the traffic problems on Julianalaan. 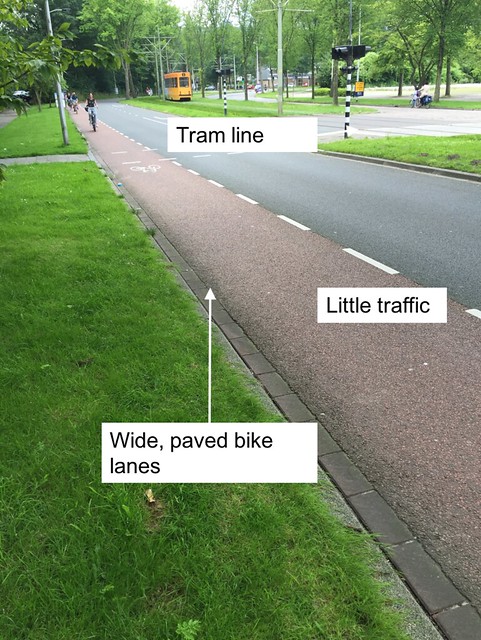 The Buitenhofdreef is a throughway with one lane in each direction and there are limited intersections. The municipality decided to install bike lanes. Like almost all bike lanes that we have seen, the surface is red asphalt and contains dashed white lines. Given how wide these bike lanes were, the cycling for me was stress free. Grates, manhole covers, and potholes that are so common in American bike lanes were absent in these Dutch bike lanes, leading to a smooth and relaxing ride. The design benefits from good planning because the vehicles passing by are neither too numerous nor traveling too fast. These bike lanes seem like an efficient, safe, and relatively inexpensive facility and were very convenient in this situation. 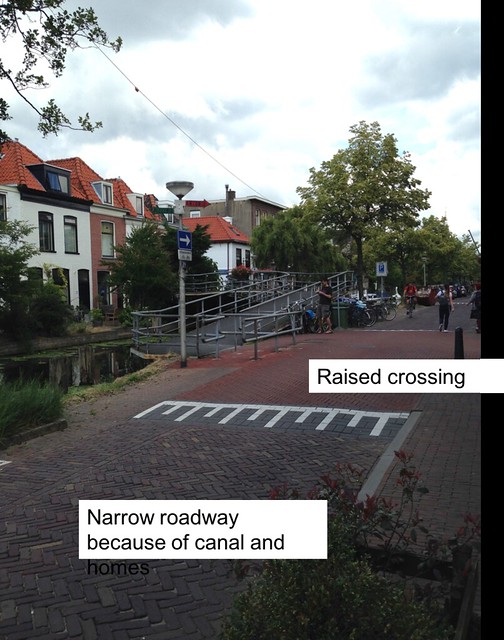 As a cyclist, this facility felt very safe. The lack of through traffic is perhaps the greatest reason why. The roadway used to be a through road, but some some time ago this traffic was rerouted via a bypass. Due to Dutch policy, after building the bypass, the municipality then downgraded the Buitenwatersloot. They did this by installing a pollard that allows buses and bicycles to travel through but allows no auto traffic. As a result, the road was almost completely car-free. For the occasional car that goes by, the municipality installed speed bumps to slow down traffic. The roadway itself is very narrow because of the houses on one side and the canal leading out of the city on the other. The facility seems very inexpensive. It appears as if the only thing the municipality needed to do was to install the sloot and signs indicating that no auto traffic is allowed. 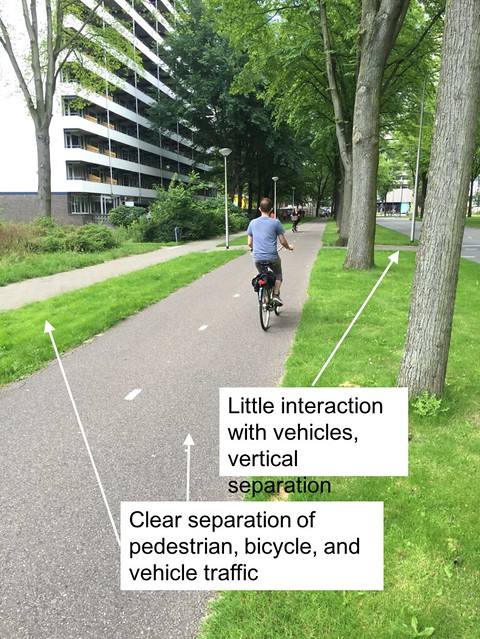 For this very wide street, the municipality decided to install two-way cycle tracks. The two way cycle tracks are a fair distance away from the road and are separated by a large grassy median with tall trees evenly spaced down the road. As a cyclist, you feel extremely separated from the cars as you bike down the parkway. Only at the occasional intersection do the cyclists interact or even have to the think about the vehicles. The municipality installed cycle tracks on this segment of roadway because of the abundance of space, the roadway capacity, and the speed of traffic. The two-way cycle tracks are especially important because of the long distances between intersections. If the cycle tracks were one direction, people would bike the wrong way. Overall this segment seems more expensive than a traditional bike lane. However, if this segment was a bike lane instead of a cycle track, it would be much more unsafe. Therefore, a cycle track seems like a good investment. 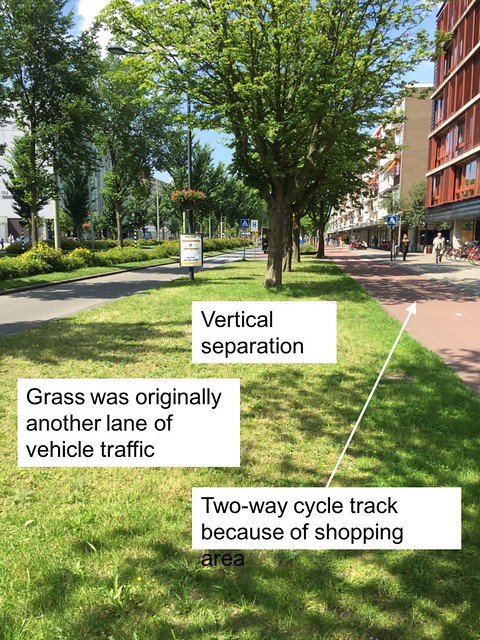 This road was originally a four lane major road with a tram line running down the middle. It was recently downsized to only one direction of travel in each direction, with the tram still running down the middle. There are two-directional cycle tracks on each side of the road. As a cyclist, the cycle track felt very safe and it was very convenient to be able to travel both directions on the same side of the road. The street is very well designed because the shopping that is on one side of the street has a two-directional cycle track, allowing the shoppers to be able to quickly go from one store to the other while staying on the same side of the street. This transformation appears to have been very expensive, given that they downgraded a major road and built cycle tracks. Yet, despite this expense, the investment appears to be worthwhile as it now allows safe, convenient, and seamless travel for cyclists. 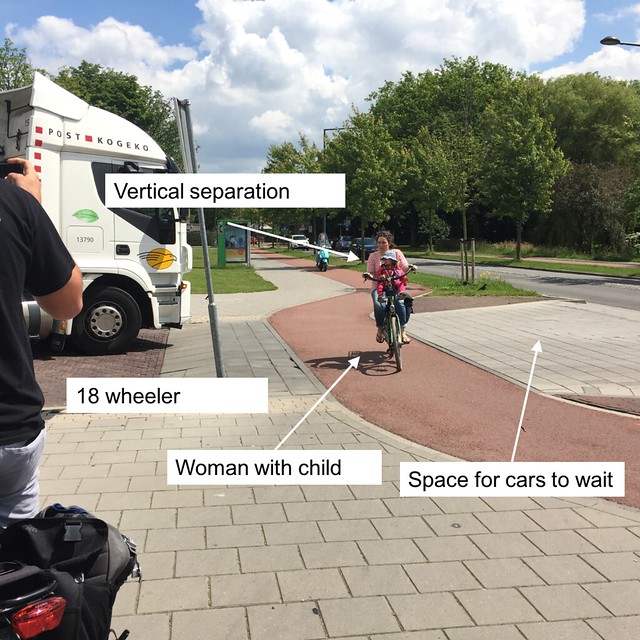 This street has one lane of travel in each direction and parking on both sides. The municipality decided to install one-way cycle tracks on each side of the roadway. The cycle tracks are physically separated from the roadways by parked cars and trees. As a cyclist, the facility felt almost too safe. Overall, it did feel very safe. I observed a situation where a mother with her child on the front seat of the bike crossed a road in front of a waiting eighteen wheeler. The situation was very relaxed and the relaxed nature of this encounter is a direct result of good planning that makes the cyclists visible to drivers. The intersections along the cycle track are designed in a way where a turning car is perpindicular to the cyclist, making the cyclist visible to the driver. Also, where the cycle track crosses intersections the cycle track remains red, providing a continuous area in which a car is entering a bike zone.  There is even a space between the roadway and the cycle tracks that allows the turning car to yield to bicycle traffic and not cause a pileup behind it. This facility seems expensive yet necessary because of the high level of traffic on the roadway. 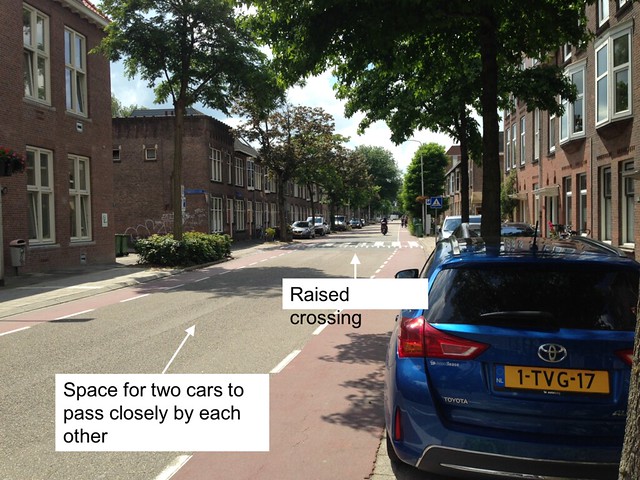 The municipality decided to install advisory lanes on a roadway that was two narrow for bike lanes. Each advisory lane is paved with red asphalt and contains a dotted white lane. The middle section between the two advisory lanes is just wide enough for two cars to closely pass. From observations, the advisory lanes helped to slow down traffic as the cars had to sometimes wait behind cyclists before passing them. As a cyclist I felt more safe on these advisory lanes than on a road with bike lanes because traffic was in general moving a lot more slowly. Raised crosswalks also helped to slow down the traffic. Given the lack of space, the design is both safe and seems relatively inexpensive. 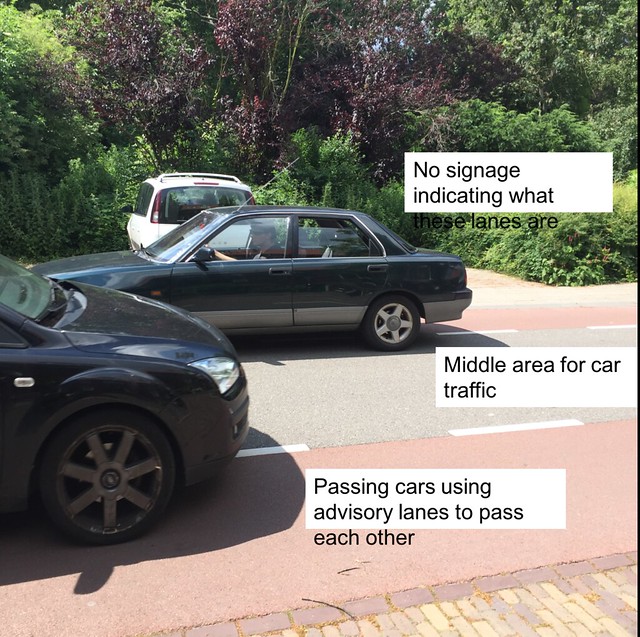 This street was connected to the Hugo de Grootstraat and also contained advisory bike lanes. The road was very narrow with only space for one car in the middle. This road seemed slightly more chaotic because of how narrow the road was and a modest level of traffic. However, both cyclists and drivers seemed calm and composed. There was no indication of what exactly was going on with these advisory bike lanes but it was pretty obvious to cyclists and drivers as what exactly they had to do. The road was busy enough where it merited some sort of bicycle infrastructure yet too busy for no infrastructure. Overall it seemed like a moderately inexpensive solution to this street. 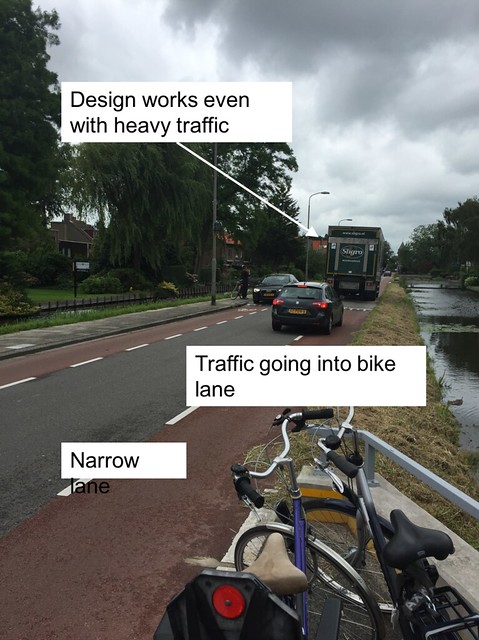 This street was a moderately busy two-way road with advisory bike lanes. The road was not wide enough for either bike lanes or cycle tracks. This road was pretty busy with some heavy traffic. Despite this, biking in the advisory bike lanes felt very safe because of the slow moving traffic and idling traffic. For example, a semi passed me and I felt absolutely no stress. For the municipality it seems like an inexpensive solution to the Molenweg.