In its simplest form, the goal of a bike boulevard is to supply cyclists with an attractive and direct route of meaningful length between common destinations via mainly local streets. Bike boulevards are also known as quietways in other parts of the world due to the fact that car traffic on the designated streets has to be very low in order for it to be safe, and therefore attractive, for cyclists. To achieve this, through car traffic must be discouraged. The main ways to discourage through car traffic is with diversion techniques. Diversion discourages drivers from using the local roads by making some one-way and by killing other roads. On one way streets, allowing contraflow is necessary for qualification as a bike boulevard.

Once the traffic volume is sufficiently low, the speed of the remaining traffic must be controlled to maintain the safety for cyclists. Several traffic calming treatments can be applied to the bike boulevard route to keep speeds low. One incredibly effective traffic calming treatment is the frequent use of speed humps. This is an approximately 3-5 meter raised portion of the road that slows cars but has minimal effect on cyclists due to its gentle slope and length. Several other commonly used treatments are narrowing roads, adding bayonets, and using different colored or textured pavement. After these two steps are taken the final step is to make sure that there is sufficient signage and pavement markings for wayfinding, denoting the priority of bikes, and safe crossings of any arterial streets that can’t be avoided.

Buitenwatersloot once was the main route connecting Den Hoorn and Delft. However, now traffic is diverted leaving the route a bike boulevard. At either entrance there are one way signs marked for motor traffic, with signs that mark the necessary contraflow exception for bikes. There are no lanes marked along the road, but the old cobblestones and bricks form a subtle contraflow lane for bikes to follow. The tight squeeze between parked cars and the canal and speed humps help ensure slow speed for cars and therefore pleasant riding for the bike traffic. Traffic calming features extend along the entire road, making sure the low speed is constantly achieved. 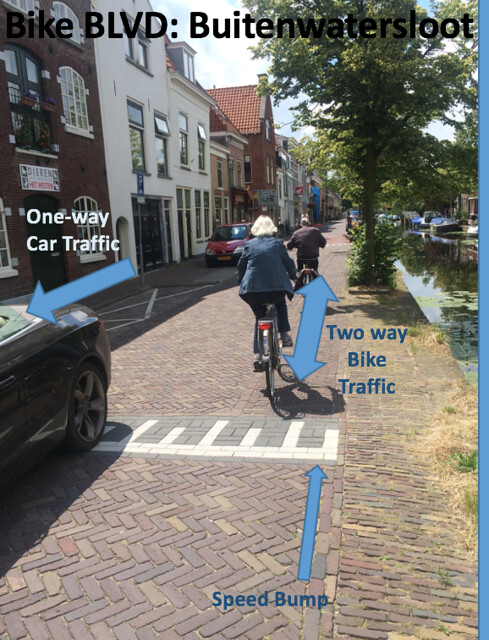 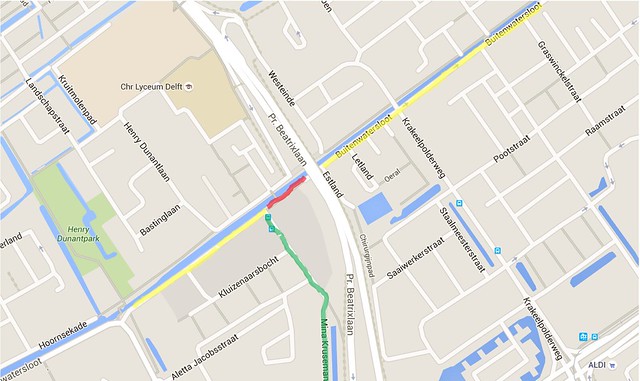 Oostsingel also extends along the side of a canal, sandwiched between that and residential homes on the other side. It too has one way signs, but it also takes other means to deter traffic from entering. Among these means are dead end signs (with exception for bikes and mopeds), barriers at connections to other residential streets, and typical traffic calming features mentioned above. This reduces the traffic flow, making it a safer and more attractive route for bikes. Additionally, some of the traffic calming measures apply only to cars, meaning they won’t get in the way of bicycles. The speed humps end with just enough distance from the sides of the road to let bikes cross without having to go over the speed humps, while they are otherwise unavoidable for cars. Oostsingel is also a great example of a transition from a bike boulevard to a separate cycle track next to a road. The connection at the end of the street is called a dog-leg connection and extremely slows down the cars to a speed that they can properly watch for all the possible conflict points with bikes. 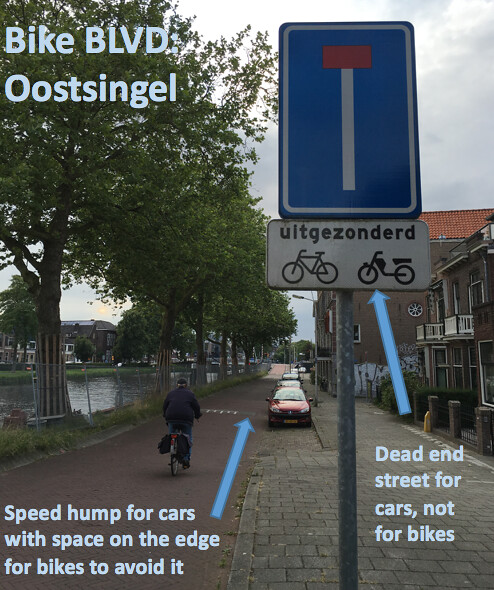 Below is a map Oostsingels location in the Delft area, highlighted in yellow. 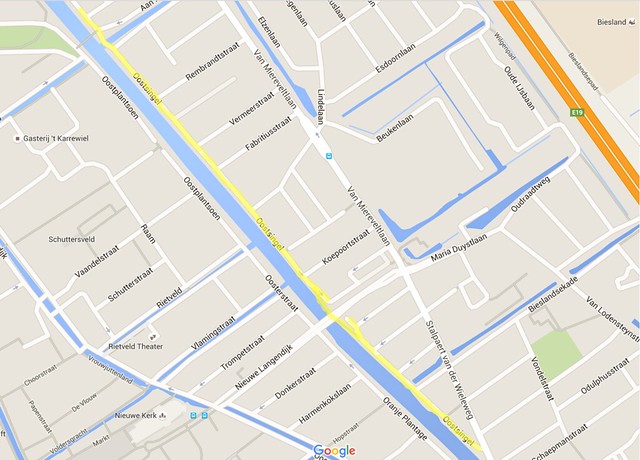 Applying the Bike Boulevard to Boston:

One of the key ways of increasing the modal use of bicycles is providing a thorough network for cyclists to use in a city. In Boston, there are very many missing links, but we decided to focus on the lack of network around the Mission Hill area in particular. The picture below shows the current bike routes acknowledged by Google just north of the Mission Hill neighborhood. 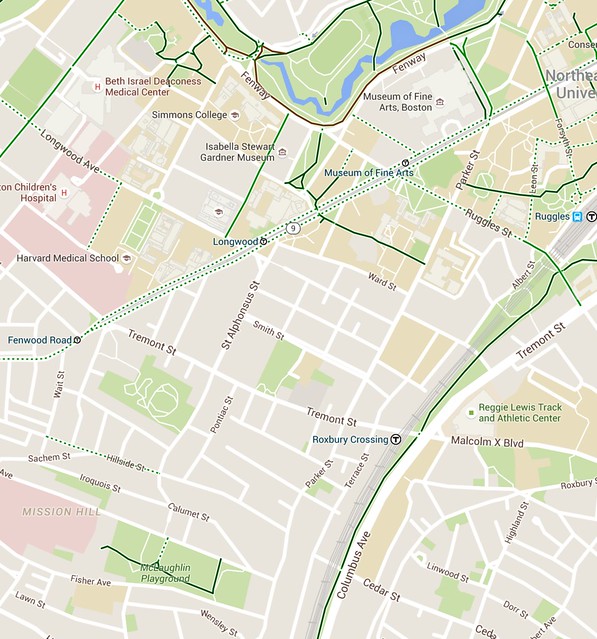 The area in which we want to improve the bicycle route connectivity is bordered by several existing routes labeled as “bike friendly”. The Southwest Corridor, Ruggles Street, Huntington Ave, and McLaughlin Playground all surround a large number of streets that have no bike facilities at all. This section is outlined below. 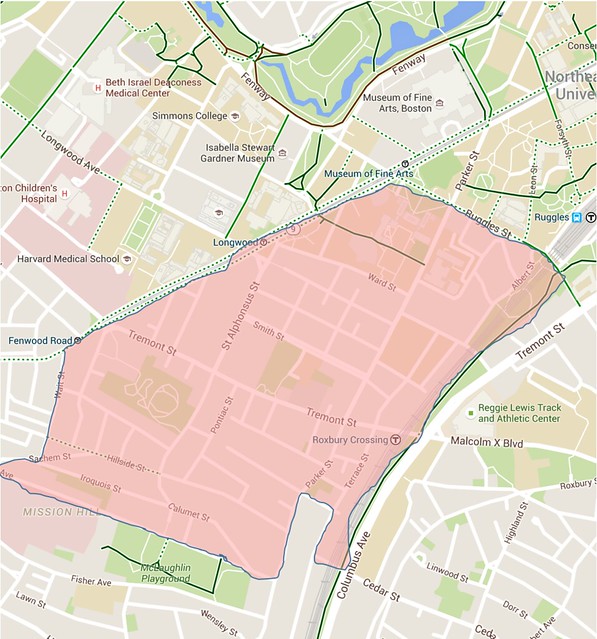 With our proposed bike boulevard additions, much of the motor traffic would be diverted and cyclists will be able to reach much more of the area on a safe and direct route. The roads we decided to turn into bike boulevards are outlined below and include Prentiss St., Parker St., McGreevey Way and St. Alphonsus St.. This would effectively connect the Mission Hill area to more of the bike routes around Fenway, and give a more efficient connection to areas North of Mission Hill rather than following the Southwest Corridor all the way to Mass Ave. 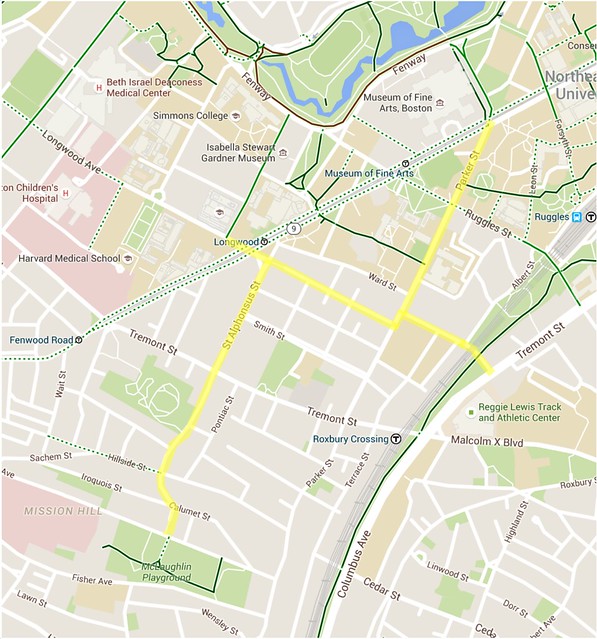 The plans for altering the traffic on these streets to favor biking would need to include signage that alerts drivers to a slower speed limit and the fact that they will be guests on a road now mainly used by bikes. The specific changes to implement this are as follows:

These were general ideas that we had, but now with a focus more on Parker Street, we came up with these revisions:

Continue Parker Street the way it is currently, but in the area between the intersection of McGreevy Way and Prentiss Street, we just kill the street. We make it into a car-free zone by putting up road blocks, and effectively connect McGreevy and Prentiss. This also will stop most, if not all, through traffic down Parker, so bike can also enjoy access to the rest of the street.