Our project seeks to improve facilities for cyclists and pedestrians on Blue Hills Parkway and Unquity Road to give them priority, but still maintain the street as a through road for locals wishing to go to the Blue Hills Reservation, all while leaving Eliot and Olmsted’s original design involving the median unaltered.

Constructed in 1898, Blue Hills Parkway was the product of the collaboration between Charles Eliot and the Olmsted Brothers. Eliot is most famous in Boston for his work on the Charles Esplanade that provides an area of recreation, refuge, and nature to the city dwelling Bostonians while the Olmsted Brothers company is widely known for their work on major roadway projects in places such as Yosemite Valley and Acadia National Park. The layout of the parkway was planned in 1894, land acquisition began in 1896, and following the death of Charles Eliot in 1896, the parkway was completed in 1898. In 1909 with the construction of Milton High School and in later years Tucker Elementary School, Blue Hills Parkway steadily attracted more residents, allowing Milton’s population to grow to over 27,000 residents. Though not much is known by the public about the history of the design and construction of Unquity Road, the two-lane road connects to the end of Blue Hills Parkway and travels through the Blue Hills Reservation.

Because of the nature of the parkway in design and the historical impact its creators made in the Boston area and across the country, Blue Hills Parkway was added to the National Register of Historic Places in 2003. Throughout the 19th century, Blue Hills Parkway has served the community as a means of travel to and from their homes, schools, markets, and nearby recreation in the Blue Hills.

As it is now

Blue Hills Parkway starts at Mattapan Square and goes south to Canton Road where it changes to Unquity road.  Then Unquity Road winds through the Blue Hills Reservation ending at Hillside Street. 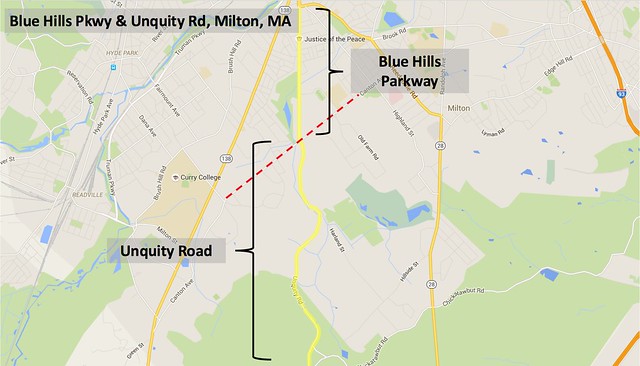 As of right now, Blue Hills Parkway is a two-way road separated by an historic median with two lanes of cars going in either direction. In certain parts there are bike lanes and designated parking, and in other areas, a third lane that is generally used as a parking lane. Blue Hills Parkway continues as Unquity Road once it ends, and Unquity has a 1+1 lane design with no bike paths.  It increases in elevation into the Blue Hills Reservation. 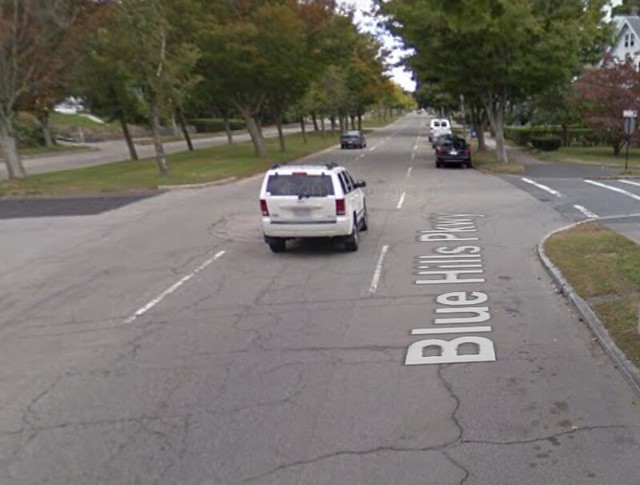 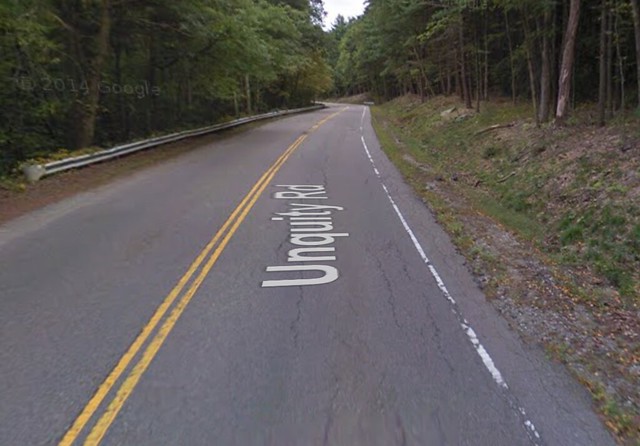 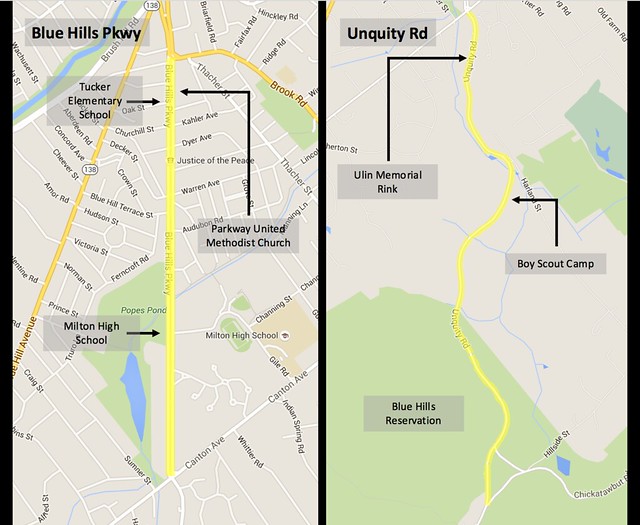 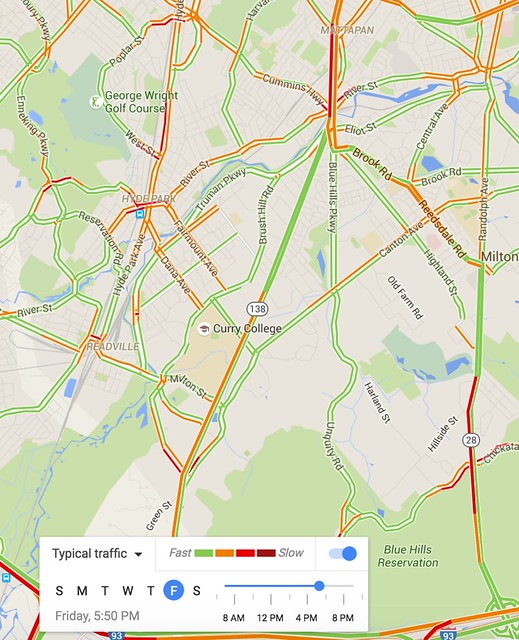 The Blue Hills Parkway and Unquity Road functions as a route for through car traffic to get to Blue Hills Reservation at one end and to the Mattapan train station and Boston at the other.  Blue Hills Parkway also serves residential homes, Elementary and High school traffic, along with some church traffic. The people around this area are the ones who would benefit from an increased cycling network, which would provide another option to get to Boston, Blue Hills Reservation, and the local churches, schools and residences.

Blue Hills Parkway provides a route for some through bike traffic with a bike lane, and also has pedestrian use for all ages. The appropriate speed limit for these functions is 30 mph, which is Massachusetts law for “thickly settled areas,” and 15 mph through school zones, which is 5 mph lower than Massachusetts law. Unquity serves only car traffic currently, with no bike or pedestrian facilities. The speed limit on Unquity will be 40 mph because it’s outside of the “thickly settled” area.

The through car traffic function is dangerous when there is limited pedestrian crossing areas and the pedestrians include school children. There are two bike lanes on either side of the road but they are strictly paint and so lack separation and permanence. 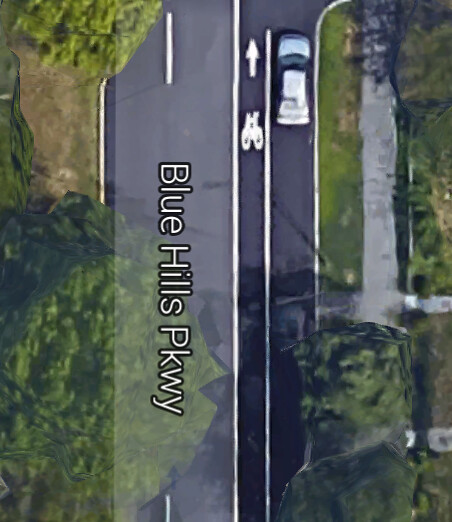 They also lack the safety features required at intersections to make them attractive routes for through bike traffic, and actually disappear halfway down the road on the southbound side. 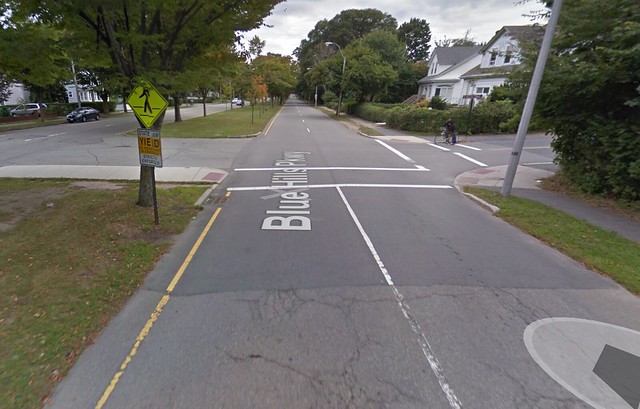 Pedestrians are better served than cyclists because they have uninterrupted sidewalks on both sides of the road. However, the intersections are not marked well enough for the main users of the sidewalks who are most likely school children and families.

The Blue Hills Pkwy would be classified by the Dutch as a Wijkontsluitingsweg, which translates to “district connection road”. This means that there is a split in usage between residential and through traffic, and has the appropriate speed limit of 30-50 kph, which is 18-32 mph. When it changes to Unquity Road the classification would change to Gebiedsontsluitingsweg, which translates to “area access road”, and is a national road classification in the Netherlands with a speed limit of 50 kph. These classifications match up perfectly with the speeds stated at the beginning of this section.

There is no need for traffic diversion because Blue Hills Parkway and Unquity Road are local through roads to and within Blue Hills Reservation, both with very low usage.

Our project seeks to improve facilities for cyclists and pedestrians on Blue Hills Parkway and Unquity Road to give them priority, but still maintain the street as a through road for locals wishing to go to the Blue Hills Area, all while leaving Eliot and Olmsted’s original design (the median) unaltered.

Some main objectives surrounding the construction of the Blue Hills Parkway and the Unquity design are that they would be:

Constraints of a new design for Blue Hills Parkway and Unquity road include:

Considering the road functions, this design will redesign poor facilities for cyclists, intersections, school zone designs, parking, amount of space for through traffic, parking friction, driveway interference, and turning areas. It focuses most on improving bike functionality, school zone areas, and intersection safety, while maintaining facilities for through traffic. Our design calls mainly upon Dutch cycle and road design techniques. Cross-sections of different segments of Blue Hills Parkway are shown below, with before and after designs shown. No cross-sections are shown for Unquity because the cycle track departs from the road therefore, no changes are made to the actual road. 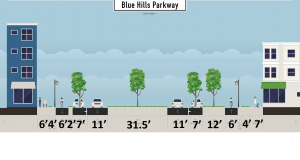 The major changes that we propose are adding two-way cycle tracks on both sides of Blue Hills Parkway with safe crossings for cyclists at all intersections. We also plan on improving the intersections with Canton Rd and Brook Rd by adding modern roundabouts and safer traffic signals, respectively. This will increase safety for pedestrians and cyclists while automatically slowing cars. Our designs will make crossing near schools safe and more convenient to minimize jaywalking. We will add queueing areas at turns in a select few intersections so that cars can cross the bike lane separately from the driving lane, which will negate some of the waiting time and possible collisions. At side street intersections we will give pedestrians and cyclists priority and raised crossings.

We also propose making speed limits self enforcing along the entire length of the street. We will implement measures such as speed humps, rough pavement, vertical blinders/trees, parking friction, raised crossings, and traffic tables at intersections to control speed since the road is flat and along a straight path.

On the Unquity Road segment we propose completely separating the cycle track from the road area so that it follows the path of Pine Tree Brook. This will eliminate all possible conflict points with cars except for the points where the track rejoins the road. 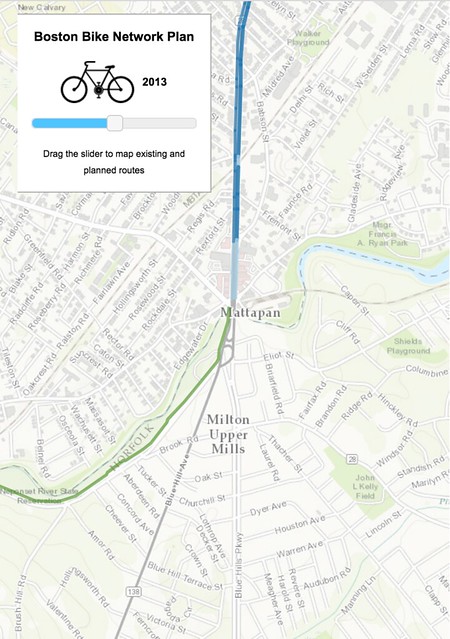 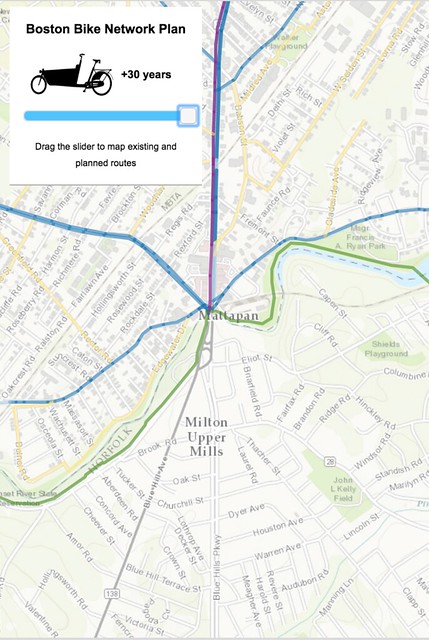 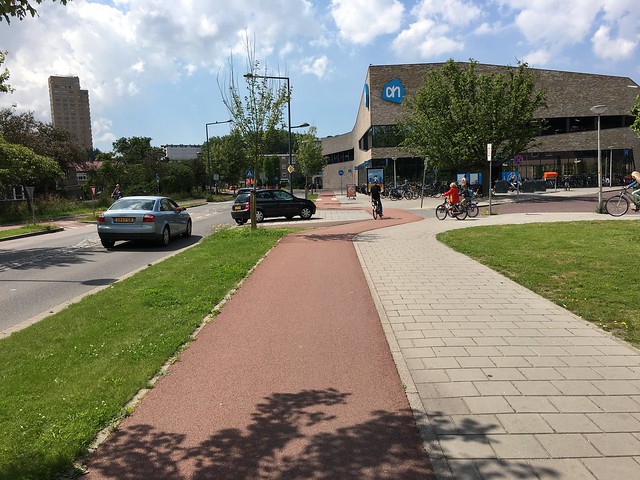 Above is an example of a queueing area for cars to enter or exit an area on a Wijkontsluitingsweg classified road.

Above is an example of a Dutch raised crossing where bikes have priority. 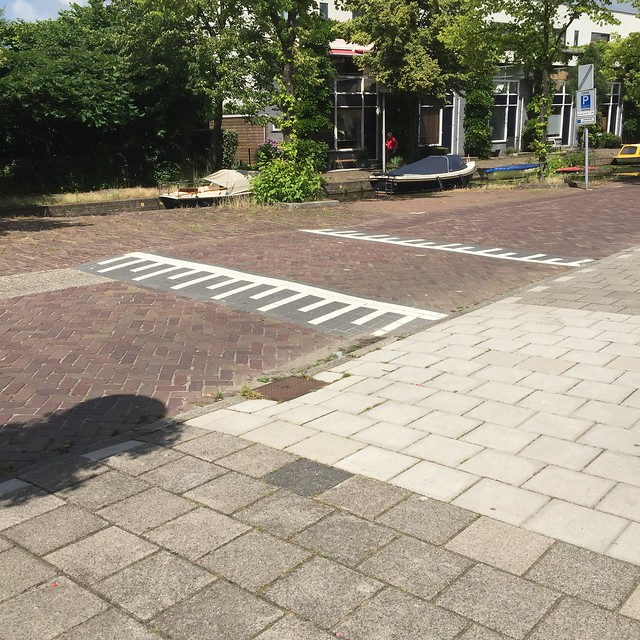 Example of a Dutch speed hump. 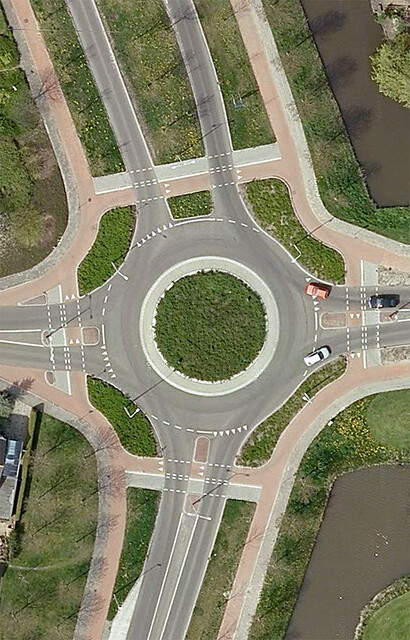 Above is an example of a modern Dutch one lane roundabout. In this example the cars have priority but in other cases, the bikes may have priority depending on the yield markings.

At all intersections on Blue Hills Parkway, we made sure to eliminate parking for 30 ft on both sides. This is in accordance with NACTO design guidance and improves visibility for drivers making turns, therefore making cycling safer. We will also reclaim asphalt at several intersections to make sharper turning angles, decreasing their speed considerably. These streets include Warren Ave, Cathering Rd, and Audobon Rd. 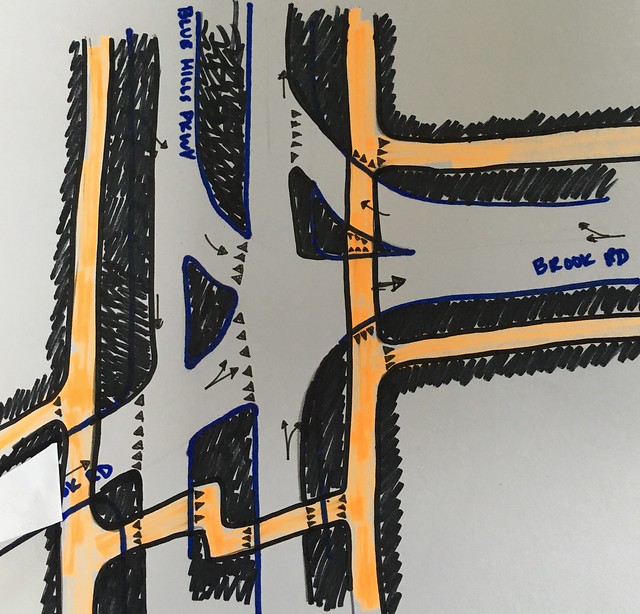 At the intersections of Churchill and Kahler, Verndale and Dyer, and Warren and Decker, we will push back the cycle tracks from the intersection to provide queueing area for cars turning. Cyclists have priority and right of way at all side street crossings, emphasized by raised crossings. However, where cyclists cross Blue Hills Parkway the cars have the right of way and cyclists have to yield. This is to maintain good flow for local through traffic on Blue Hills Parkway. We call this intersection the H intersection. 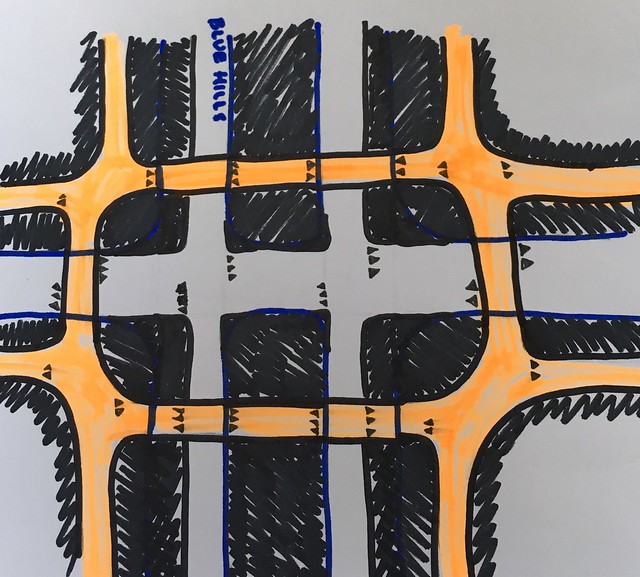 At the Oak Street intersection, where the elementary school is, parking will be removed and replaced with a right turn lane on southbound side. Traffic lights will also be added to create protected crossings for schoolchildren. No left turn lane will be made for northbound traffic so that we do not compromise the historic median. Instead, left turning traffic can wait between the split in the median so as not to block traffic in the lane. This in turn gives them a better view of pedestrian and cyclist traffic on Oak Street, increasing safety. The picture after the next paragraph can be flipped 180 degrees and applies directly to the Oak Street intersection. The only difference is that there is a break in the median.

At the intersection with Gile Road, right in front of the high school, we plan to add a traffic table paved with rough pavement, with one cycle track crossing Blue Hills Parkway. We plan to pair this with traffic calming treatments (speed humps, yield signs)  approaching the intersection on both directions to significantly slow traffic to the designated 15 mph school zone speed limit. At this, and other, T intersections, the cyclists will have the right of way as they cross both lanes of traffic. 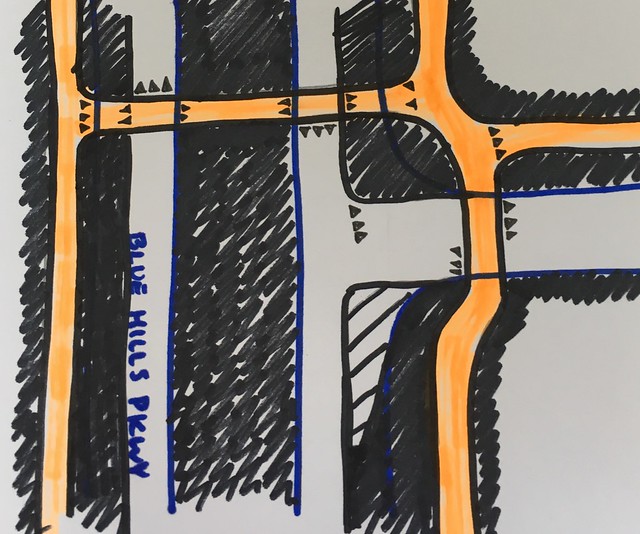 At the major intersection with Canton Ave we will add a modern one lane roundabout with priority for cyclists and pedestrians at crossings. The picture below represent a comparable Dutch example to the one we have designed for Canton Ave. Notice the continued cycle track all around the roundabout. The connections to the east, west, and south roads would be slightly different for our design due to differences in existing and connecting bicycle infrastructure.

The picture below shows the current intersection with Canton Ave. There is pedestrian crossing, but no cycle crossing. This will be improved with the new design. 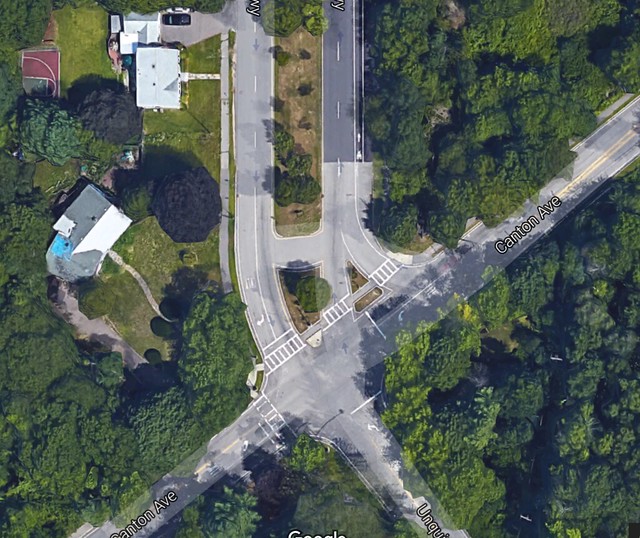 Here is the current set up at the intersection of Blue Hills Parkway/Unquity Road and Canton Ave. 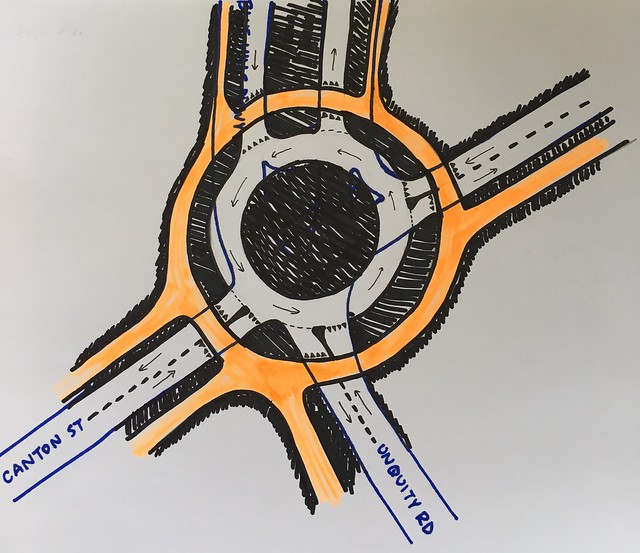 Above is the proposed reconstruction of the Canton Ave intersection with a one-way roundabout where cyclists have priority.

The above designs don’t address all of the issues that this road faces, rather they fix a few of them thoroughly and to the best of our ability. We improved bike functionality with two-way cycle tracks on both sides of the road that connect to existing and future bike networks. We also improved school zone areas and intersections safety by clearly marking pedestrian priority at certain intersections, or giving them protected crossing at others. Traffic calming treatments were added to the road to aid bike functionality, school zone awareness, and intersection safety while still maintaining efficient facilities for local through traffic. All of these address our vision statement, which is repeated again directly below.