In general, the format of an advisory lane from side-to-side is a pedestrian walkway, parking lane, one-way advisory bicycle lane, vehicular travel lane, one-way advisory bicycle lane, parking lane, and pedestrian walkway (see Figure 1 below). In general, advisory bike lanes are used on roadways that are not wide enough to support two one-way bike lanes with a one or two-way vehicular lane in the middle. This is usually because space is tight on the roadway (10-15 feet for a vehicle travel lane), and the engineer must make due with what is available. The travel way in the center of the bike lanes is usually not wide-enough for two-way vehicular traffic, so the one-way bike lanes on either side of the travel lane are shared between cyclists and vehicles, especially when one vehicle needs to pass another vehicle. The engineer instead designs a roadway that has visibly separated, but physically shared bike lanes and vehicle travel lanes. Additionally, on either side of the bike lanes, pedestrian lanes and parking lanes have to be accounted for. However, parking lanes are only implemented where space is sufficient, so pedestrian lanes have a minimum width, and parking spots are installed in areas where space is sufficient along with the bicycling lanes and travel lanes. While advisory bike lanes hold no legal meaning in terms of right of way, they are generally accepted and respected. Finally, advisory bike lanes are limited to roadways with low traffic and low speeds, with an average daily traffic amount of less than 5000 vehicles. This is why cyclists and vehicles are able to drive on this roadway with the limited amount of space. 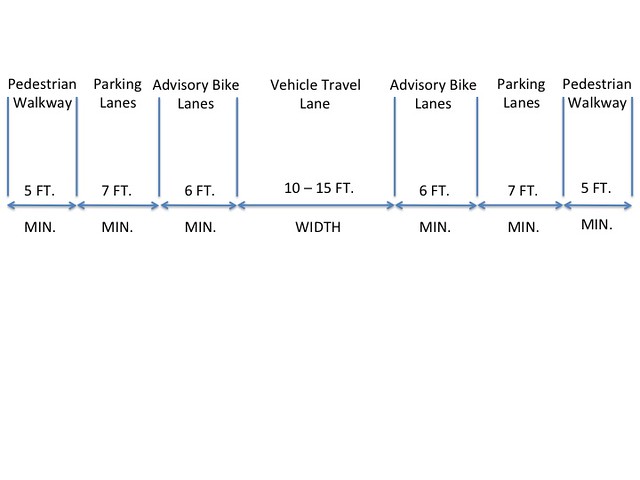 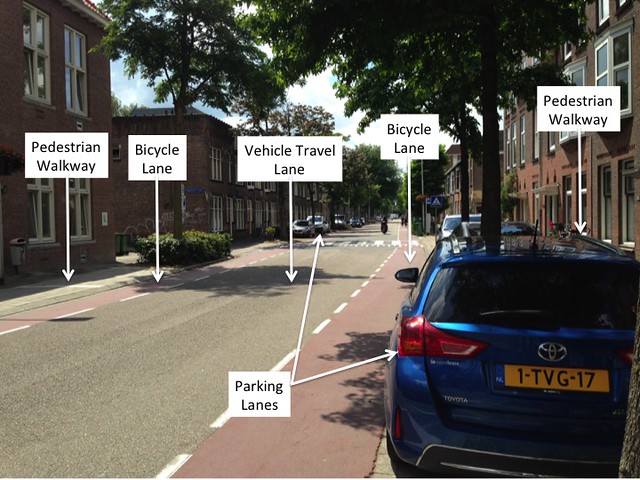 Hugo de Grootstraat, a facility that contains advisory bike lanes, contains a pedestrian walkway, parking lanes, bike lanes, and a 12 foot wide two-way vehicle travel lane. It is a local street, with access to the houses located on this street. The traffic on this street was low, so even when two vehicles had to pass each other when there was also a cyclist, the vehicles slowed down and took advantage of the advisory bike lanes so that they were able to pass each other. Additionally, parking along Hugo de Grootstraat was not too crowded, and the vehicles seemed to have a sufficient amount of parking space lining the roadway. Additionally, cyclists were able to travel the roadway leisurely and did not seem to feel uncomfortable or unsafe. Lastly, crosswalks are located along the street, and when pedestrians were waiting at these crosswalks, both vehicles yielded to the crossing pedestrians. However, cyclists had priority overall. 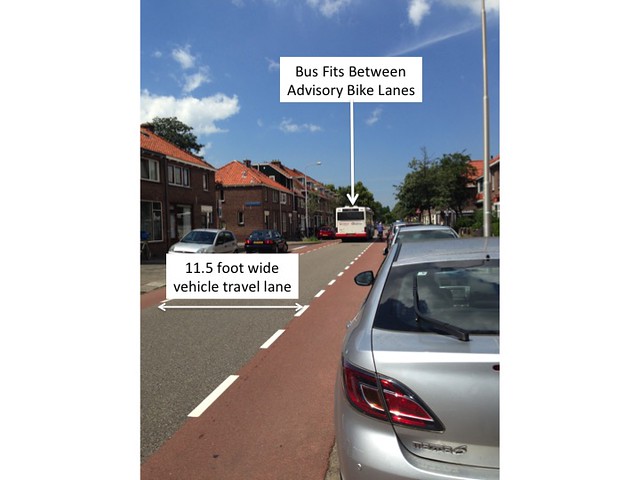 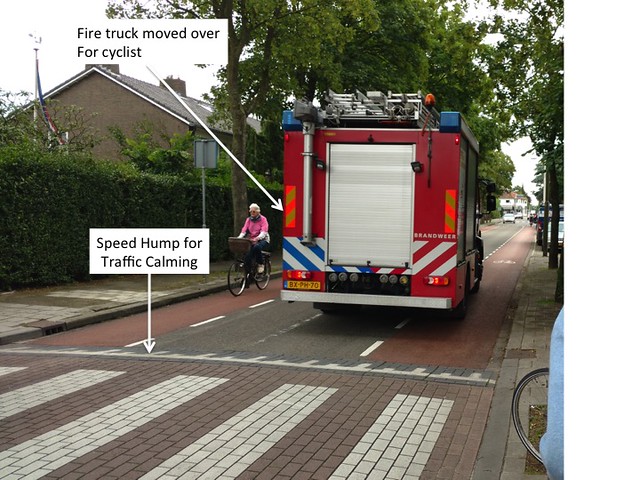 Locations 11A and 11B, Molenweg and Kerkweg were the last facilities visited that contain advisory bike lanes. Location 11A can be seen in Figure 4 above. This facility only contained parking on one side of the roadway, and contained pedestrian lanes on both sides, advisory bike lanes, and a vehicle travel lane. The travel way at this location was approximately 10 feet wide, which would only accommodate one vehicle, so a majority of the advisory bike lanes’ widths had to be used when two vehicles were passing each other. Furthermore, when vehicles were passing cyclists, the vehicles moved over into the opposite bike lane in order to avoid hitting the cyclists, which can be seen in Figure 4 above. The vehicles and cyclists were able to travel comfortably past each other because of the traffic control devices along the roadway, specifically speed humps (see Figure 4). Lastly, pedestrians had crosswalks located along the roadway, where cyclists had priority, but vehicles had to yield to pedestrians (see Figure 4).

In the United States, we do not have any roads that currently have advisory bike lanes. The most comparable American bicycling treatment is the sharrow, shown in Figure 5 below on Huntington Avenue in Boston. 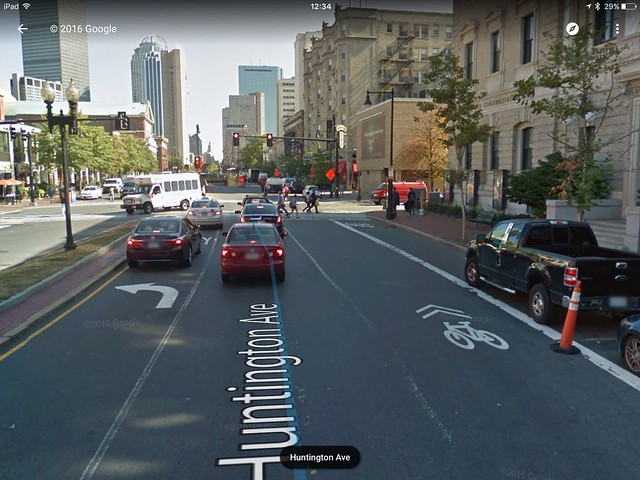 Sharrows mean that bikers and car drivers share the lane. The bicyclist may take up the whole lane if she/he chooses. However, more commonly, bicyclists stay to the far right of the travel lane and American drivers drive right up behind the bicyclist, encroaching in their space, and then aggressively pass bicyclists on the left. This treatment is a passive treatment that is much more subtle than advisory lanes and, in our experience, much less effective.

In thinking of streets in and around Boston that could be possible candidates for advisory bike lanes, we tried to think of street segments that have low daily traffic volumes with low speeds, who could benefit from traditional bike lanes, but could not accommodate them due to space constraints. We also tried to think of routes that wouldn’t be ideal bicycle boulevards as that is a less expensive treatment that we would implement in those areas instead. In our brainstorming, we identified Marlborough Street in the Back Bay neighborhood and Symphony Road in the Fenway neighborhood as two possible candidates.

Marlborough Street, as can be seen in Figure 6 below, is currently a one-way street with one travel lane and two parking lanes on either side. 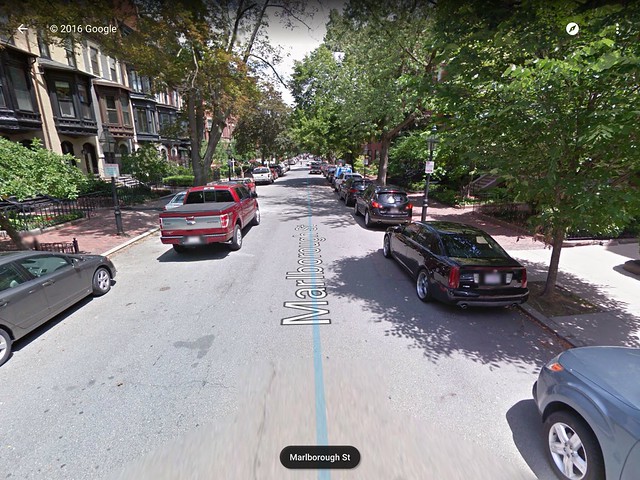 It runs East to West in between Beacon Street and Commonwealth Avenue and is a residential street with parking on either side. The on-street parking is by resident permit only and less transient than parking to access stores. If we categorized this road as the Dutch do, we would call this a local road whose target speed limit would be 20 mph (roughly 30 km/h). Although we could not find the Average Daily Traffic (ADT) for Marlborough street, we assume it is less than 5,000 cars per day because most users take Commonwealth, Boylston, or Newbury for through traffic and residents mainly use Marlborough. An ADT of 5,000 is a suggested threshold for advisory bike lanes according to Dutch guidelines. ADT’s above 5,000 are too high to accommodate the sharing of the central travel lane that advisory lanes require. We believe that Marlborough meets this requirement, however current traffic data could knock this out as a possible candidate. When measured using Google Maps, Marlborough Street is 33 feet wide from curb to curb. In order to accommodate traditional bike lanes, it would require at least 34 feet – but ideally more. If we were to implement conservative traditional bike lanes, we would like to see 7-8 feet for parking, 6-7 for bike lanes, such that we have a 14 foot reach,  and 10 feet for travel lanes, resulting in a 38 foot wide street, not including sidewalks. So, advisory bike lanes are a good solution on this tight street. In this case, we would leave the remaining sidewalks as they currently are. With advisory bike lanes, the travel lane does not need to be at least ten feet wide and will therefore be 5 feet wide, after a 14 foot reach is put in on either side of the street. As this is a one-way street, one of the bike lanes would be a contra flow lane.

Symphony Road, as shown below in the Figure 7 below, is also a one-way street that connects St. Stephen’s Road to Hemenway Street in the Fenway neighborhood. 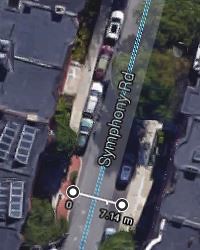 Figure 9: Symphony Road Width with Parking on One Side 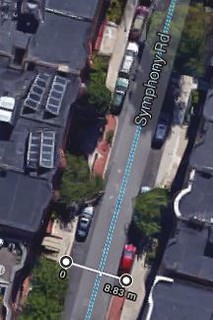 Figure 8: Symphony Road Width with Parking on Both Sides

If we tried to achieve a 14 foot reach on Symphony broken down into 7 foot parking lanes and 5 foot advisory bicycle lanes, we would need 28 feet for reach at points where there are cars on both sides. That would leave the remaining foot for an advisory bike lane. We could also be more aggressive and have a 12 foot reach on either side, leaving the remaining 5 feet for a travel lane.

At points where there is only parking on one side of the street, we would have 2 feet left over for travel after a 14 foot reach on one side and a 5 foot advisory bike lane on the other side. If we had a more aggressive 12 foot reach, we would have 4 feet left over for travel. While we realize these travel lane would be narrow on Symphony we think that it would help create a boundary between bicyclists and cars through suggestive paint that would help improve the comfort level of the cyclists. Because Symphony is a one way street, the bike lane opposing traffic would be a contra flow lane.

Symphony is very similar to Marlborough Street in terms of use. By adding advisory bike lanes, we hope to reduce the aggressive driving on this street, passively suggesting that cars yield to cyclists and share the road with them at a speed of 30 km/h. While we were thinking of possible streets where advisory lanes would be appropriate, we thought a lot about why we wouldn’t just do nothing on the streets we chose. With some streets, no treatment is appropriate due to low traffic volumes and is the cheapest solution to create safe bicycle routes. However, we felt that the traffic on Symphony fell in the range in between 2,000 and 5,000 ADT which is just enough for cars to warrant advisory bike lanes and few enough cars that they would work.