In this assignment, we begin with an introduction and description of advisory bike lanes. Then, we analyze and compare the advisory bike lanes on Hugo de Grootstraat and Westplantsoen in Delft and Molenweg in Nootdorp. We discuss the differences of how space is shared between bicyclists and motor vehicles on narrow roadways in the Netherlands versus the United States. Next, we examine two roads in Boston, Calumet Street and Parker Hill Avenue, discuss if advisory bike lanes would be a benefit or hindrance, and then provide recommendations.

a) Advisory Bike Lanes in the Netherlands

Advisory Bike Lanes are used when a roadway is too narrow to provide two traffic lanes and two bicycle lanes. When implemented, there is a single car lane with no center line between two one-way bike lanes. These bike lanes have dotted lines signifying that cars can cross them. Cars will have the need to encroach on these advisory bike lanes when avoiding oncoming traffic or to park along the road. These advisory bike lanes are sometimes referred to as “suggestion” lanes and they have no legal bearing. They provide the cars and bicyclists with their own sense of space and work well to organize traffic along narrow roads.

Hugo de Grootstraat has parking spots on either side (with two car bays) and advisory bike lanes on either side. This street seemed fairly wide upon riding it and two cars could almost fit side by side in the center lane while passing each other. Measured with Google Maps, the center car lane was measured to be 17 feet wide. With this wide center lane, the only time traffic had to slow down was when each bike lane had a cyclist and two cars approached all at the same point. Due to the infrequency of this occurrence, this was a low stress road for us while riding. The wide center lane also gives the bicyclists more room to hug the inside of their lane, which avoids the potential of dooring from the cars parked on either side. While riding on this street, there was a moderate amount of traffic, but the advisory lanes made for an easy ride. 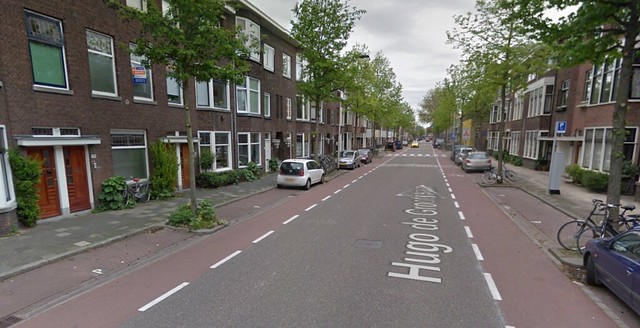 On this street, there were advisory bike lanes and on-street parking on either side of the road. The center lane measured a distance of 10 feet across, making this street much more narrow than Hugo de Grootstraat. This narrow width causes traffic to slow down when two cars and one bicycle meet at the same point, causing one car to take up the unoccupied bike lane. If two cars and two bikes meet at the same point, one car must yield and allow for space to become available. This narrow road has the capability of accomodating less traffic then a wider advisory lane road, such as Hugo de Grootstraat.

At the time of our observation, this street was very busy and a bit congested due to a truck making a delivery. The truck was pulled over into a bike lane on one side of the road, causing a queue of cars traveling south to form behind it. Meanwhile, cars traveling north slowly shifted into the other bike lane to pass the delivery truck, making sure to avoid any bikes in the lane. Bikes traveling north on Westplantsoen stayed in their advisory bike lane traveling as normal, sharing the space with motorists. Once the road was clear, cars queued behind the truck began to edge out slowly to check for oncoming traffic, then proceeded to pass the truck and continue onward. This situation made this street appear more stressful for drivers and cyclists, although it also seemed to be an isolated occurrence. 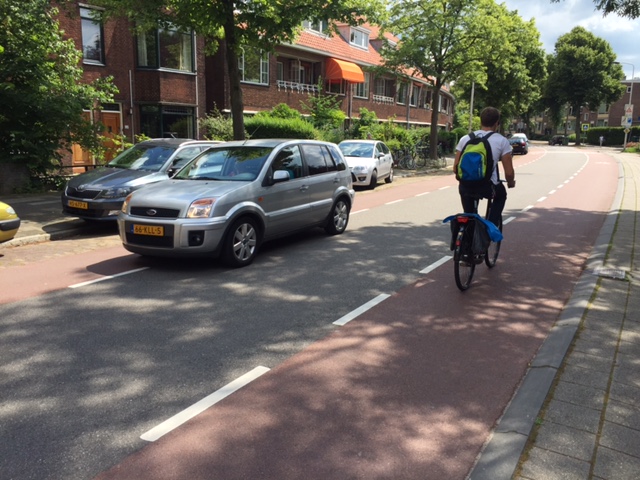 This street is located in a residential neighborhood of Nootdorp, and it is heavily used by both bikes and cars. There is no on-street parking and canals line both sides of the road. The center lane on this road was also narrow, measuring approximately 10 feet across. This is a comparable road to Westplantsoen, and as such, traffic will slow down when anything more than two cars and one bike meet at the same point.

It was observed that motorists will move over into an empty bike lane to give riders more room when possible. Another scenario observed was when two cars approach with a cyclist in one of the bike lanes. The driver on the side of the road with the bike slowed down to the speed of the cyclist and moved into the bike lane behind them. Meanwhile, the other driver moved into the open bike lane on their side to allow more room, and continued on as normal. Once this car had passed, the driver behind the cyclist reclaimed the driving lane and passed the cyclist. The behavior of the local cyclists showed that as long as they kept in their bike lanes, drivers would accommodate by moving around them. 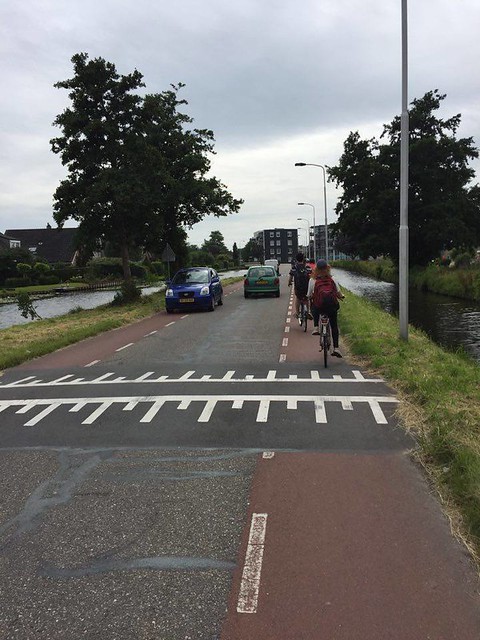 b) Advisory Bike Lanes in the U.S.

We estimate that Calumet Street and Parker Hill Avenue, located in the Mission Hill District of Boston, have the appropriate traffic volume for advisory bicycle lanes. Calumet street is a winding residential road with street parking on most of it and a pedestrian sidewalk on either side. It connects to two major through roads, Huntington Avenue and Tremont Street, on one end and to Parker Hill Avenue on the other end. Parker Hill Avenue is a road that stretches over the top of Mission Hill that travels past housing, the New England Baptist Hospital, parking lots, and the Mclaughlin Playground, including fields and basketball courts. There is parking on mostly one side and pedestrian walkways on either side. Both of these streets are too narrow for ordinary bike lanes, but they are also are heavily used by students and professionals that ride their bikes to the local universities, businesses, and offices. We believe that these streets are decent candidates for advisory bike lanes which have an average daily traffic (ADT) of between 2000 and 5000 cars, however, it should be noted that bicycle behavior is very different between Dutch and U.S. roads.

Road Sharing in the U.S. Versus Netherlands:

In the U.S., roads that are too narrow for bike lanes sometimes have sharrows painted on travel lanes to indicate that drivers should allow bike riders to take up a lane as they would another motorist. However, this often becomes a stressful situation for riders, and due to a combination of fear and courtesy, they usually will hug the shoulder and allow cars to pass. Signs that alert drivers to “share the road” are also sometimes put in place, though as discussed in class, drivers often ignore or simply do not see these signs. As such, signage does almost nothing to protect those on bikes. When there are no signs or markers to indicate a shared road for bikes and cars, bicyclists simply ride in the shoulder of the road and simply hope they are noticed by drivers. Drivers, in this situation, have no reason to anticipate cyclists which can lead to negligent driving practices highly dangerous to those on bikes.

In the Netherlands, they have remarkably different bicycle facilities for when roads are too narrow for a bike lane and two traffic lanes. To remedy this situation, the Dutch implemented the advisory lanes, as described previously. Although advisory lanes require more coordination on part of drivers and those on bikes, the system works efficiently and provides a designated safe space for those on bikes. The widespread bicycle usage in the Netherlands and their overall bicycle-friendly culture helps contribute to the ease in which the cars and bicycles share the roadways.

Calumet Street is primarily a residential road that winds up the side of Mission Hill in Boston. Most of its residents are young adults who make at least one or two short trips per day, often to their respective college campuses. While many of these residents either walk or take public transportation, a significant portion ride their bikes since it is the cheapest and fastest method of getting to most destinations in Boston. Having ridden this street frequently, we find that it would be beneficial to have a designated space for cyclists, to counteract the stress due to vehicular cycling. The road does not have any center line except for a small segment at its beginning, and cars with permits are usually parked on either side of the road. The road width between the parked cars is just large enough for two cars to pass one another, therefore a traditional bike lane would not work well along Calumet Street. The road is frequently used by cars as a feeder road to other main roads and popular destinations.

In most regards Calumet Street is ideal for an advisory bike lane. Additionally it is just the right width to accommodate one traffic lane and two one-way bike lanes, since it measures approximately 19 feet across, between parked cars. This would suffice for an 11 foot travel lane, and two four foot advisory lanes. The road is also heavily used by cyclists throughout the day, due to varying class and work schedules for its residents. While there are cars parked along both sides of the road, they tend to have a fairly low turnover rate. For most of the road there are not long car queues, which is essential for advisory lanes to work efficiently. However, at the major intersection at Brigham Circle, where Calumet connects to two major roads, cars often form long queues during rush hour. There is also a Stop and Shop market at the base of Calumet Street near this intersection, further adding to congestion problems. As a result of this situation at the beginning of Calumet Street, advisory bike lanes may not be practical for the entirety of this road. While many residents and travelers would benefit from these advisory lanes, the traffic problems at the busy intersection of Brigham Circle would become difficult accommodate if there were not two traffic lanes. 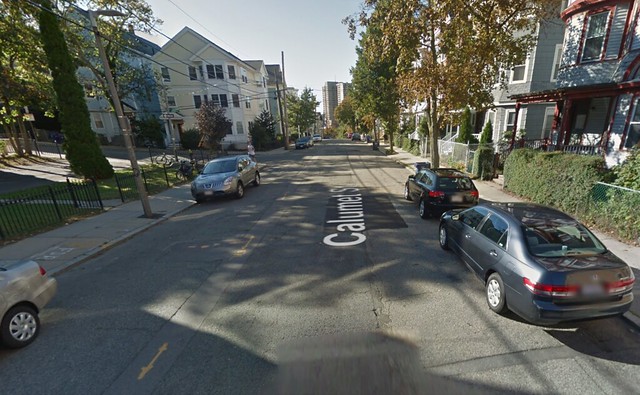 Similar to Calumet Street, Parker Hill Avenue also provides access to many Mission Hill residences, in addition to a park and hospital, as mentioned earlier. It also is a frequently traveled connector road. The residents in this area are similar to those living on Calumet Street, as they too bike to the local colleges and shops everyday. This road is the perfect width to benefit from advisory bike lanes. The road is approximately 26 feet wide. With a seven foot parking lane on one side, 19 feet remains for two, four foot advisory one-way bike lanes, and an 11 foot car lane. The traffic is frequent and from personal experience, riding becomes stressful during peak hours. Although the one-side of parking does not require a permit, it still has a low turnover due to its residential location. Parker Hill Avenue has a less hectic intersection with Huntington Avenue than Calumet Street. For these reasons,  we believe it would be advantageous to implement advisory bike lanes on Parker Hill Avenue. 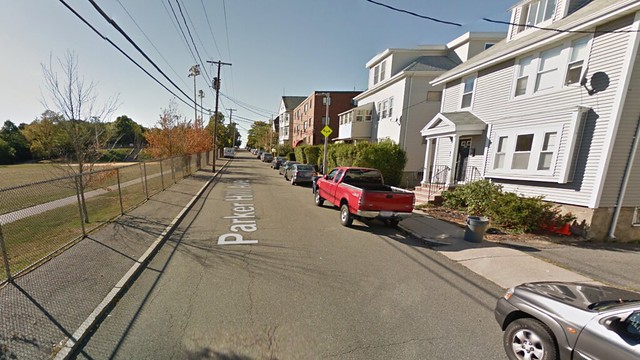 In conclusion, advisory bike lanes are an efficient method for bikes and cars to share a road with space constraints and moderate traffic flow. Although the bike-friendly culture of the Netherlands contributes to the success of the advisory bike lanes, they would have a positive impact on certain streets in the United States.