The city centre of The Hague became car free in 2009 shutting down car access on major roads such as the Spui/Kalvermarkt intersection. A redesign of these areas with cyclists and pedestrians in mind resulted in a more enjoyable city centre with higher air quality and better business for those situated in the area. We are looking for other areas in the Hague’s intercity that have the potential for beautification and economic benefit if the pedestrian area were to increase.

Norrdeinde is lined with designer shops, cafes, and restaurants and it is one of the most expensive shopping streets in The Hague. A small section, where this street begins at the south to the intersection with Heulstraat, is currently car free, though cars are allowed to turn right onto Norrdeinde from Heulstraat. This road has a sidewalk on both sides, cars traveling with bikes going northbound, and approximately 50 parking spots lining the left side. We feel making the section of this road, starting on Heulstraat and continuing to the Oranjestraat intersection, car free would allow for an increase in pedestrian flow coupled with economic benefits for the shop owners.

Making Heulstraat car free, starting right after the parking garage, would allow for a significant amount of bike parking. This would help alleviate some of the blockage that parked bikes create for pedestrians on the sidewalks of Norrdeinde. Additionally, if the cars could travel and park for the full length of Heulstraat, there would not be a way for the cars to turn around. The next problem with this solution involves Paleisstraat, currently a one way which is in the direction of and ends on Norrdeinde in front of the working royal palace. If the one way was reversed, a turn around area designated, and a couple of mechanized bollards placed before the plaza, it would allow access for the residents of the street and easy access to the working palace for the King. Oranjestraat is the next side road we had to consider and we decided it would be best to leave it and the section of Norrdeinde north of it open to car traffic as the former street is residential, making the parking necessary. 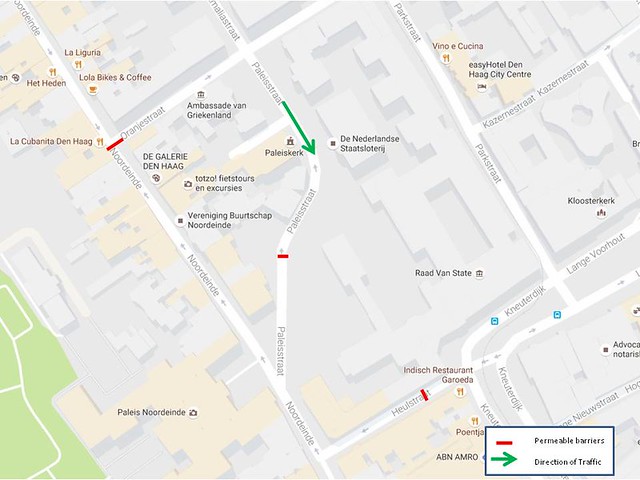 With cars not travelling down or parking on a sizable section of Norrdeinde, it removes constrictors to pedestrian flow and allows more pedestrians to be in this area. The restaurants and cafes can expand out onto the sidewalk with outdoor seating. This will benefit their businesses by giving them, not only more table space, but more attractive table space. Shops will also benefit as their storefronts will see an increase in foot traffic which will result in more potential customers entering their stores and as a result more sales. Enacting this solution will remove some car parking, but the trade off is an increase in bike parking, pedestrian traffic, and profits for the businesses of this street.

Since Buitenhof ends only a few hundred meters further than its intersection with Lange Vijverberg, it is proposed to be cut off at Lange Vijverberg with permeable barriers so that the nearby areas can become car-free and better suited for pedestrian and bike traffic. However, in order for this concept to work properly and for traffic to be able to flow, Dagekijkse Groenmarkt would also have to be cut off at Rond de Grote Kerk so that vehicle traffic in that area would be able to turn around easily around the church. 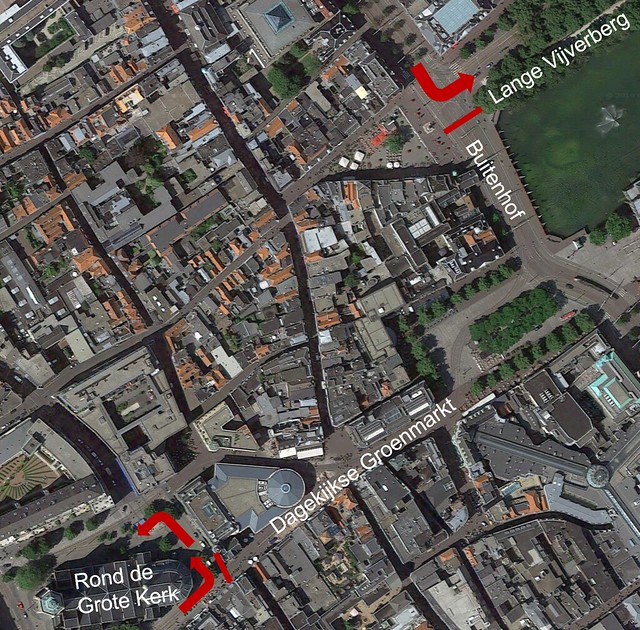 In addition to making the shops in the area more accessible and the making on-street seating available to restaurants and bars, the Hofvijver pond would also be much more pleasant due to the absence of vehicle traffic and pedestrians would no longer have to worry about crossing Buitenhof, a multi-lane road, in order to get to the edge of the pond. 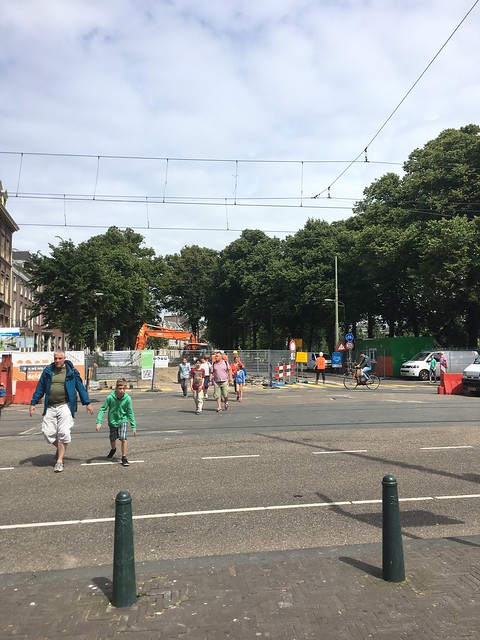 Buitenhof in its current state, lacking pedestrian crossing areas due to construction

Boekhorststraat (along with Koningstraat) provides a connection from Parallelweg and den Haag HS station to Prinsegracht and the Grote Markt. The permeable barriers preventing vehicles from accessing the commercial center of The Hague are slightly east of the intersection of Boekhorststraat and Prinsegracht. Vehicles are allowed to travel down Boekhorststraat and there is street parking on one side, though very few cars usually park there. This street also sees a fair amount of traffic since it is the last turn that drivers can make when driving east on Prinsegracht towards Grote Markt. Sidewalks are narrow and there is not much space for pedestrians, and the remaining space for cars and cyclists is similarly small.

We propose extending the car-free city center space out from Prinsesgracht and Boekhorststraat to Prinsesgracht and Brouversgracht, which we could leverage to create car-free space on Boekhorststraat between Prinsesgracht and Herderinnestraat. We could eliminate the parking lane on Boekhorststraat and the remaining space that was once used for vehicle travel could be narrowed and still used effectively as a two-way cycle track. The increase in space for pedestrians and cyclists will allow the restaurants and businesses to beautify the space – restaurants could have outside seating and the flower shop could have an outdoor display, for example. In addition, the removal of car traffic would make this route more attractive for pedestrians and cyclists passing through the area and would draw more people to use it. An increase in the number of pedestrians and cyclists passing through the area in the absence of vehicle traffic would increase business for all stores on the street.

Traffic re-routing after moving permeable barriers
In order for this configuration to be possible, we need to provide feasible alternative routes for the traffic that would normally use Boekhorststraat. We observed drivers traveling eastbound on Prinsesgracht who used this street as the last turn before the car free city center, but those drivers could just use Brouversgracht, which runs parallel to Boekhorststraat, instead. We chose to only prevent traffic on Boekhorststraat between Prinsesgracht and Herderinnestraat because the latter street is mostly residential and we want to preserve the streetside parking for them. Herderinnestraat is currently a one-way traveling eastward, but if residents can’t access Boekhorststraat via Princesgracht, there is no path to access the road from the east. If the direction were reversed then residents could turn onto their street from Brouversgracht. The proposed car-free area shown above can therefore be attained without much inconvenience to those who would normally use the road.