A two lane road with a painted center line. Notably here were integrated bus stop platforms. These platforms diverted cyclists off the roadway to between the bus stop loading area and the bus stop waiting/seating area.  It seems like an effective solution to the issue of buses crossing or entering the bike lane in other typical  bus stops. 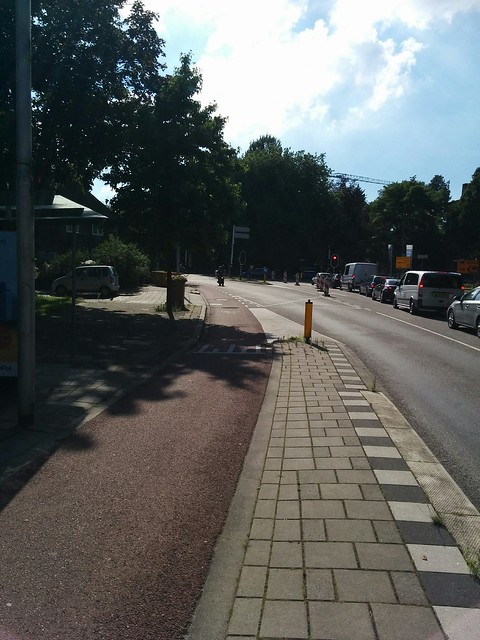 Photo above: Nassaulaan  eastbound facing towards the intersection with Julianalaan

A two lane road with dividing median, the bike lanes are curbside of each lane. Travel lanes were approximately 12’ wide with a 5-6’ bike lane. The bike lanes were a broken white striping, with worn paint, especially at DW entrances. A red asphalt mix maintained the clear lane distinction even if lane markings had worn.  The only safety concern noted while riding the facility was when vehicles along the on street parking open their doors onto the bike lane, forcing cyclists to weave towards traffic. The median allowed vehicles to travel closer to the center line without worry for oncoming traffic and cause less stress for the cyclist. A few driveways were noticed along the westbound side of the route. No other safety concerns were observed while riding the route and it was not noted to be a high stress environment. Compared to the US this seemed like a somewhat typical bike lane, but with overall driver awareness and amenities such as colorized asphalt and median, safety felt comparably better.  The expense of the facility is on the low end and provides a baseline satisfactory safety benchmark from an American perspective. To improve safety, the wide sidewalks can easily be encroached upon to create cycle tracks, shifting the bikes to the other side of the parking, but with current street lighting along the front of sidewalk, it would likely be expensive for a small gain in safety. 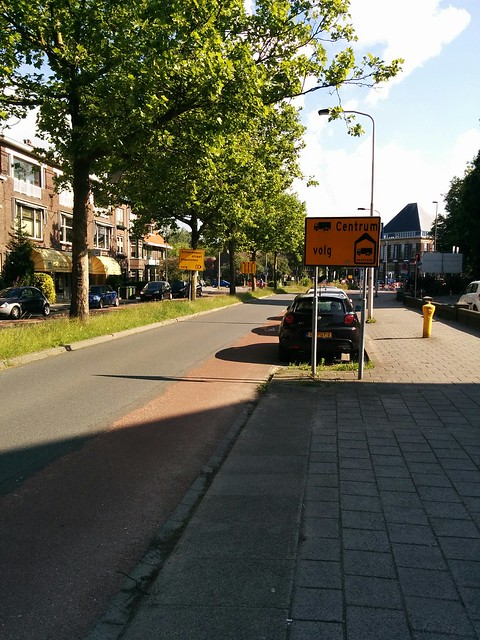 Photo above: Julianalaan southbound facing towards the intersection with Nassaulaan

One travel lane in each direction with painted bike lanes. Wide grass medians separate traffic, with a tram line in the middle. Sidewalks were also separated from traffic by a grass median. Bike lanes are wide enough to ride two abreast.  It seems like this facility could be replaced with a cycle track in the grass buffer adjacent to the sidewalk and would improve safety. 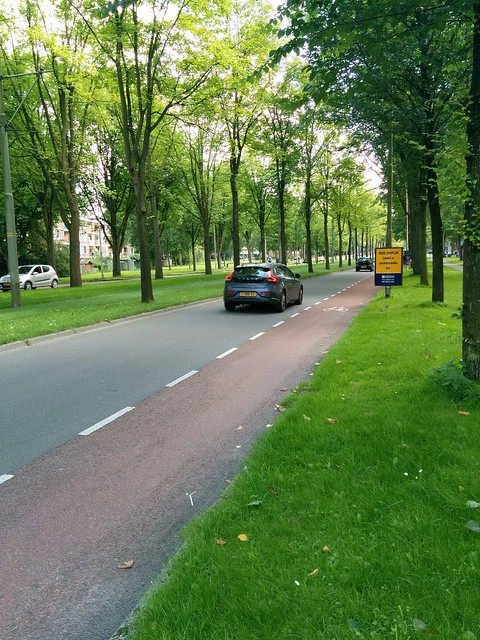 The approach to the intersection with Buitenhofdreef felt unsafe with a pocket bike lane and a right turn lane.  Vehicles seem to yield improperly to bicycles as they are more focused on the intersection than the cyclist at their side. While biking along this facility I was forced to abruptly stop to avoid collision with a motor vehicle that did not yield as it crossed onto the right turn lane. It is the same experience I’ve faced in the US and can be very stressful. The only way I can see this being improved would be to separate the cyclists with a cycle track. 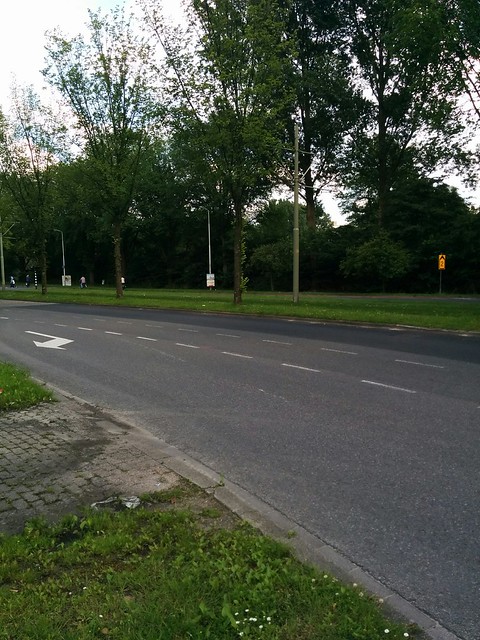 Photo above: Pocket bike lane on Martinus Nijhofflaan at westbound approach to t-junction with Buitenhofdreef

Along the corridor, not pictured, the bike lanes seemed effective for the space available.

A bike boulevard is a low speed  (i.e. less than 30km/h) road that does not promote through motor traffic, without limiting bicycles. These facilities allow bikes efficiently travel without navigating routes with more motorized traffic.

This stretch of road with contra flow served limited traffic. There was enough room for one direction of bicycles and a car to pass side by side. Vehicles parked along the canal side seemed to have very little space to unload. 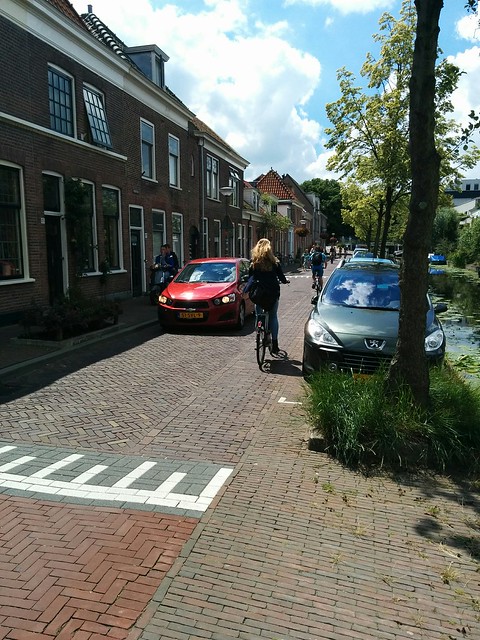 A cycle track is a bike facility that is separated from motorized traffic. It can be separated with curbing and or medians. Cycle tracks can also be adjacent or separated to sidewalks with curbing or a buffer zone. They are finished with a smooth surface (i.e. asphalt). Typically cycle tracks are one-way, but can be designed for two way bicycle traffic.

This road had a typical one-way cycle track in either direction. The two-lane road with a center median was approximately 24′ across. With relatively easy crossings, two-way cycle tracks did not seem necessary. 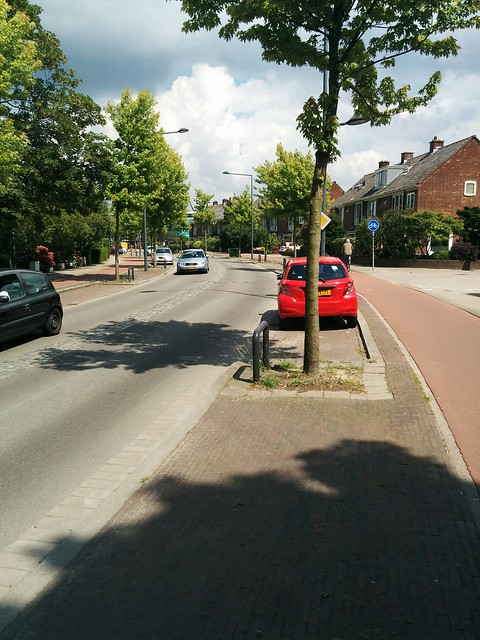 A separated two-way cycle track in either direction with wide buffers provide little to no stress on the cyclist along the corridor. The wide nature of road made crossing much more difficult requiring yielding multiple times. This difficulty was counteracted with the implementation of two-way cycle tracks which reduce bike crossings. 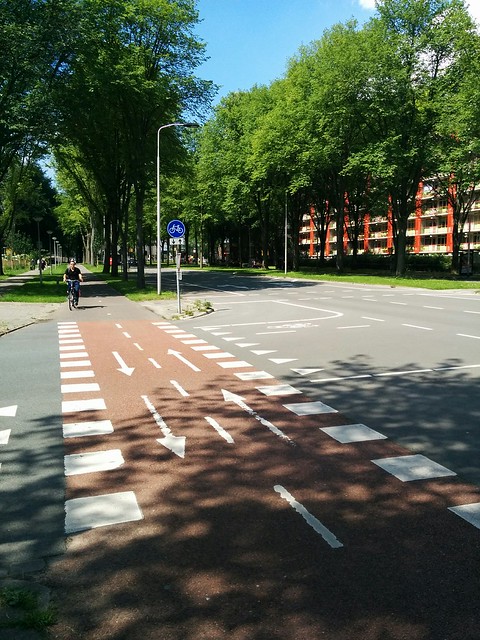 The cycle track was two-way on either side of the street and provided access to local businesses along the corridor. The roadway was wide, with two travel lanes, a tramline, and medians. The two-way cycle track allowed users not have to cross the wide roadway while providing access in either direction. 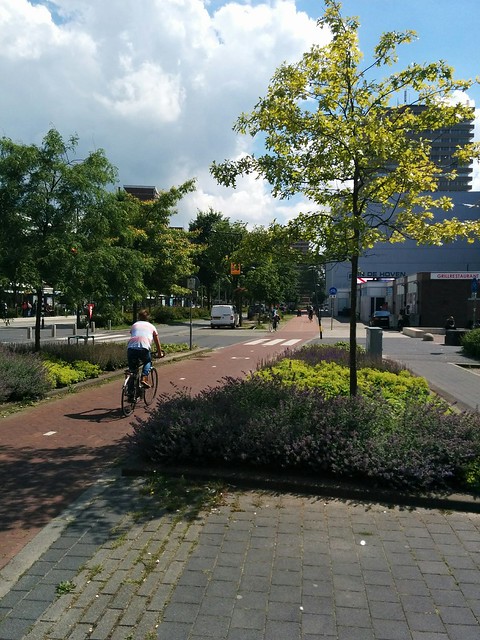 Advisory Lanes delineate “suggested bike lanes”  along a otherwise unmarked road. This treament leaves an grey asphalt width along the middle of the road while advisory lanes are placed on either side and marked with a broken white line. The advisory lane is finished with a red asphalt surface to look like a bike line. Two way traffic is allowed along the road, but vehicles only veer into the advisory lanes when opposite direction traffic must pass. Traffic otherwise stays to the grey asphalt surface along the middle of the road.

The advisory lanes seemed identical to bike lanes and did include painted bike symbols, but with the approximate 10-12’ wide grey asphalt area down the middle of the road, vehicles did frequently need to enter the “suggested” bike lanes. In the US, if this road had a center-line without bike lanes and a cyclist heard a vehicle behind them, they either  speed up and attempt to race the vehicle, or a vehicle can attempt an unsafe pass across the centerline where they speed up instead of slow down. The biker feels crushed against the curb where they, the one most at risk, must accommodate the vehicle.  With lower ADT (i.e. less than 5,000), I imagine these facilities are quite effective for the scenario they serve. Vehicles at lower speeds  (30 km/h) are forced to  accommodate the cyclist, while the cyclist is allowed to travel freely in their “lane”, seems like a safer alternative than the typical US one. 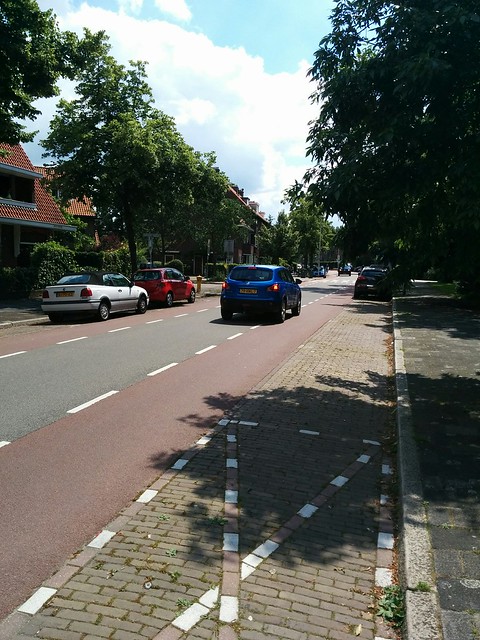 Advisory lanes in a rural road. While biking, I felt little stress when passed by vehicles in either direction. I had my own lane, while the vehicles accommodated and drove around me. 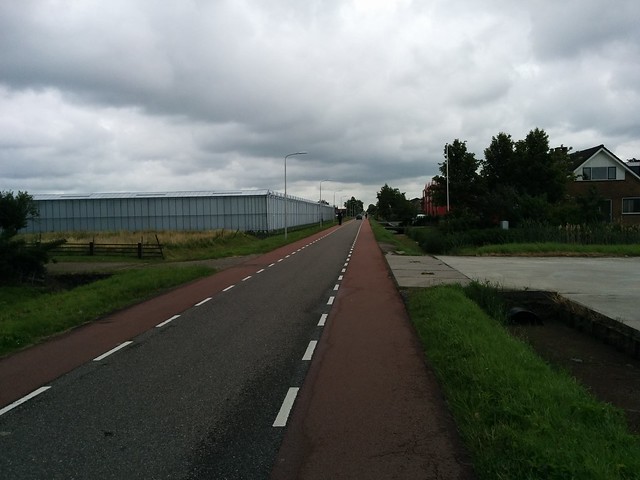 At the transition from rural to local (not pictured), a speed reduction from 60km/h to 30km/h, several traffic calming barriers were seen. These made sure that drivers adjusted to the lower speed local roads.

Adjacent to a collector/distributor road, these roads serve local traffic with high land access. Entrances and exits to service roads are limited. The residential nature of these streets, with no through access, mean lower amounts of vehicular traffic (i.e. less than 2000 ADT). With residential speeds (30km/h) these roads allow bikes to bypass the comparable high traffic and higher speed collector road for a safer alternative.

A separated low volume road providing direct local access to houses, bicycles were allowed to travel in the same path as vehicles with no separation needed. The slow speeds and nature of the service ( high direct residential access, parking, etc.) allowed bikes to safety and effectively operate without any added stress. Residential areas were serviced by a service road, but adjacent service roads were not connected. This was to stop through traffic, which would decrease bike safety by raising ADT. These adjacent service roads were connected with a cycle track which allowed cyclists to safely continue unimpeded alongside but offset from the collector. 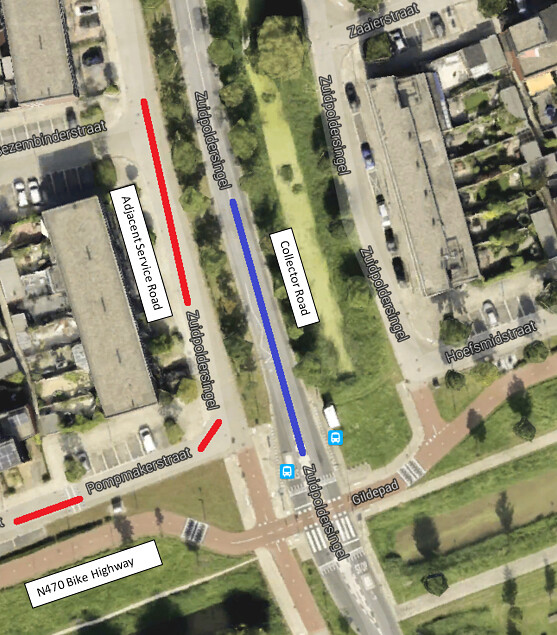 As the name implies, it is a highway for bikes. Providing longer distance connections (e.g. town to town) these bike highways run alongside motor highways, but benefit from being allowed along a more direct route. Where a motor vehicle cannot run through a town due to noise, safety and other concerns, a bike highway may.

The natural surroundings of the facility were pleasant (e.g. plantings, farmland, dykes, etc.) while providing a direct past a town. When adjacent to the motorway, the bike highway was offset both horizontally and vertically. 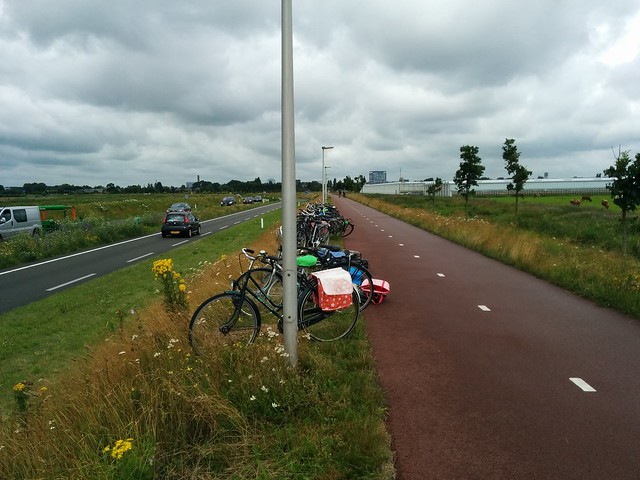 When the highway crossed collector roads in Delfgauw (not pictured), vehicles were forced to yield, with several traffic measures (e.g. speed cushions, medians, etc.) making sure traffic slowed down appropriately at these crossings.