Advisory lanes are a type of bicycle facility meant for streets with low traffic volume – somewhere around 2000-5000 average daily traffic (ADT). This treatment consists of dotted “bicycle lanes” that don’t technically have any legal value along with the lack of a centerline. The single center lane for car travel is 2-way while not being large enough to fit two cars. So, when cars need to pass each other, they are allowed to partially enter the advisory lane.
Unlike some may suspect, advisory lanes (for the most part) did not feel unsafe. Everyone riding them seemed to feel comfortable and biked in a relaxed manner. If a car and a bike were sharing the road they both had more than enough room to pass each other, even if it was two bikes and one car. The road was lined with a vertical barrier to distinguish it from the parking available on the side protecting pedestrians. Even if someone is strapping in a child into the back of a car with the car door open, it’s not an issue so long as you’re paying attention as there is plenty of room to ride around it. Additionally, even when an advisory switches from a 30 km/h to a 60 km/h, there is proper signage and physical road features to ensure that both cyclists and drivers are aware of the transition. 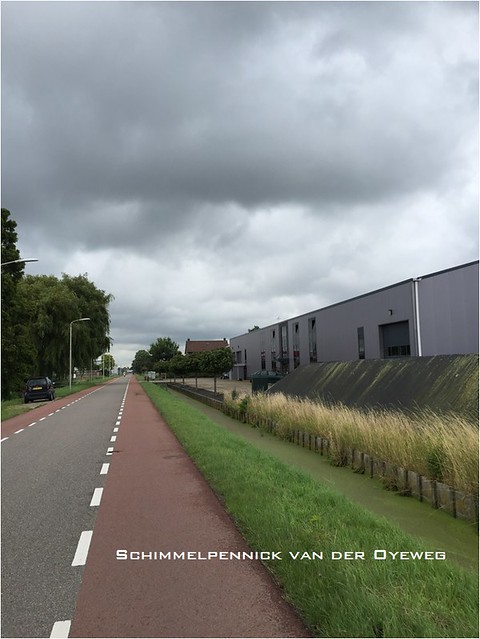 Schimmelpennick van der Oyeweg ( http://bit.ly/29vXz0U ) was an interesting advisory lane as in the middle of it, it switches from 30 km/h to 60 km/h due to it transitioning from an urban road (about 21 ft wide) to a rural road ( about 19 feet wide) .  In order to effectively and safely do this, a variety of measures were taken such as horizontal white bricks in two sections of the road near the transition point to drive the cars towards the center, the lane narrowed near the transition to 30 km/h, and the 60 km/h was paved with asphalt, where the 30 km/h was laid with pavers.These devices made us, and other bikers move more to the sides of the to road and with that, realize a change of some sort was coming and to be a little bit more aware. We were able to maintain a “Sunday stroll” pace without worrying about cars hitting us or feeling like we were holding them up. On both sections, it didn’t seem like any of the motorists were speeding and although on this road it didn’t occur, it seems like having two cars pass with bikes on the road would be safe and not an issue. Parking on the 30 km/h section was delineated by a differing brick pattern compared to the road (there was no parking on the 60 km/h section) and the suggested bike lanes were made obvious with paint and dashed lines. Even with the higher speeds on one section, this was our most enjoyable advisory bike lane experience. 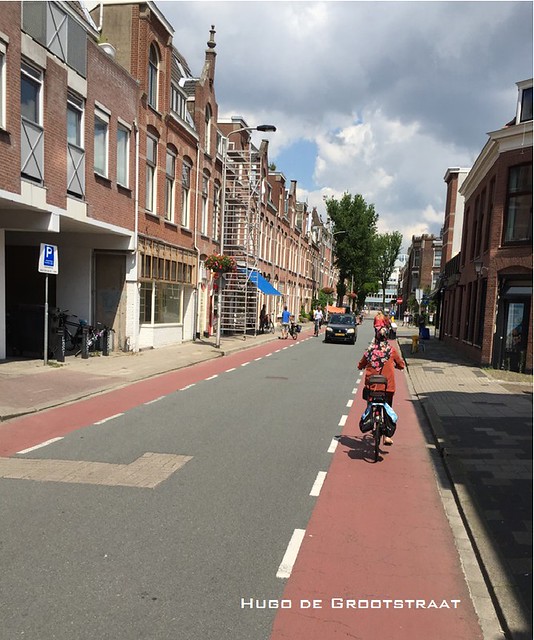 One of the other advisory lanes we rode on was Hugo de Grootstraat ( http://bit.ly/2a2UnLX ) which is about 33 ft wide and has parking on one side of the road. This flowed in a relaxed manner and most bikers were casually pedaling and cars tended to stay in the suggested auto lane. With parking on each side of the street segregated from the lane by a narrow vertical barrier one may think that the risk of getting doored or having a parent strapping in a child to a car seat makes this treatment seem questionable. However, one of us experienced the latter and it was easy to see this and avoid the obstruction. Additionally, with the prevalence of advisory lanes and bikes, people tend to check before opening their door. An interesting occurrence was when a large construction truck had to come down the road, taking up the lane and most of the suggested bike lanes. To deal with this, they had a lead biker go before the truck and clear the street so it was able to get through without issues arising. The advisory lane seemed to suit this road well as traffic flowed smoothly and no one seemed agitated or stressed. 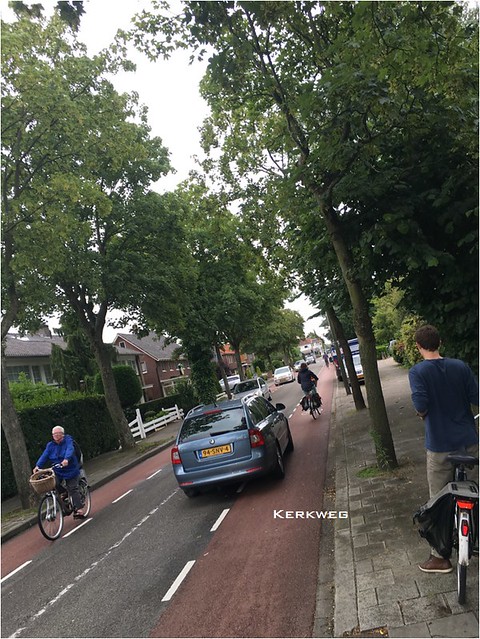 The portions of Kerkweg (http://bit.ly/29vY232) and Molenweg (http://bit.ly/29zJOQS) near the intersection of those two streets were a good example of a site where advisory bicycle lanes are still effective even with a higher traffic volume. The traffic volume through these sites (especially Kerkweg) seemed too high for this type of treatment. Cyclists acted how one would expect them to act – they stayed within the advisory lanes and yielded to vehicles where appropriate. We observed driver behavior at arguably the most crucial time in an advisory lane – where there were two cars and a bicycle trying to pass the same point at the same time. We observed this several times on these streets over the course of a few minutes. The drivers behaved correctly by waiting behind the cyclist until the opposing car had passed. This did cause minor delays to drivers but they were small –  somewhere around 5-10 seconds.

We saw that both cyclists and drivers acted rightfully in these streets. It would have been a more relaxing ride if the traffic were more along the lines of what we saw at Hugo de Grootstraat and Schimmelpennick van der Oyeweg, but the overall impression was that this facility was effective at moving both cyclists and drivers along at a reasonable pace.
Neither of us directly measured the time between vehicles as we rode around these streets. But, we both believe that if we had measured it, the time between cars would have been less than this – we estimated somewhere around one car every five seconds. This is equivalent to 720 cars per hour, which would equate to a ADT of 7200 (the cars per hour measurement at peak traffic times is roughly 10% of the total ADT). This rate falls outside of the range proposed by Professor Furth, but it should be noted that this solution was not ineffective. Rather, it was a good testament to the fact that transportation design solutions do not have to be cookie-cutter.

We have both rode on Ward Street (http://bit.ly/29yHxEl) and Prentiss Street ( http://bit.ly/29HRjHF ) in Boston many times (it’s the best route from our apartment to both the Southwest Corridor bike path as well as the basketball courts at Ruggles station) and have both felt unsafe/ uncomfortable at times. There aren’t any sharrows in place and as it’s a relatively straight stretch cars tend to fly down this street in excess of 40 mph. Currently, it seems the cars become quite irritated with either of us or other bikers on this road as the majority tend to speed up as they get around us. If two cars are approaching the same point that a cyclist is at, the result is a too-close-for-comfort scenario and a stressful ride.

Both Ward Street and Prentiss street are roughly 25 feet wide and we feel an advisory lane would have many positive benefits for both of these streets. The plan would be to paint two suggested lanes on each side with dashed lines lining the side next to car traffic. Each would be 6 feet with a .25 foot dashed lines as this provides a suitable buffer with both the curb on one side and the potential of oncoming traffic on the other side being taken into account. A 12.5 foot car lane can take up the middle. Although this is not particularly narrow, it serves as a significant improvement to Prentiss street, which currently has no center line and all too often tends to be used as a single 25-foot lane by through traffic. Ward street has a single centerline on a 25-foot road, so the single 12.5 foot lane would be the same width as the lanes currently there. In both cases, the addition of two advisory bicycle lanes and the forcing of drivers towards the middle of the road would influence them to greatly reduce speeds, especially when another vehicle is coming in the opposite direction.

The Dutch would never have designed roads like these two streets, particularly Prentiss. It is a residential road not made for through traffic and yet it is still completely unmarked and 25 feet wide, which encourages drivers to exceed the intended residential area speed limit of 25 mph. Ward is only slightly better since it has a centerline but it is still not enough. The addition of advisory lanes would enhance safety by lowering speeds and the cost of providing this facility would be next to nothing – the city of Boston would only need to remove the centerline from Ward Street and paint the two advisory lanes over the total spans of Ward and Prentiss (this amounts to about 2,200 feet of painted bike lanes along with dashed dividing lines). This small investment would have the end result of giving cyclists safe and convenient access to the Southwest Corridor path as well as the recreational facilities at Ruggles station. Also, this treatment would cause drivers to navigate this route much more slowly than they do now, which would provide much needed safety. It agrees with the reasonable Dutch viewpoint that vehicles should not be able to travel at breakneck speeds through residential areas.