Haagse Bos and Malieveld are green spaces, disconnected by a highway, near the downtown of Den Haag. Historically, these areas were used for different activities including the Malie-game and hunting. Today, they have playing grounds, areas for picnics, cycling and pedestrian routes, and many varieties of plants and animals. This connection with the parks was destroyed when the Utrechtsebaan, a 2×2 motorway, was built.

Currently, the green spaces of Haagse Bos and Malieveld are completely separated by the Utrechtsebaan highway. These are too major parks in the center of The Hague that provide space for recreation as well as the flourishing of wildlife. Utrechtsebaan is the main road giving vehicles access to the center of The Hague from the highway. The goal is to find a new design that restores a connection between the green spaces for pedestrians, wildlife, and cyclists while still giving drivers access to the center of the city on this route. 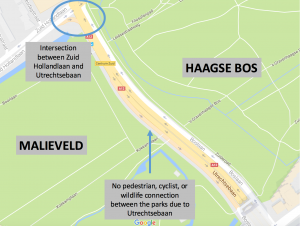 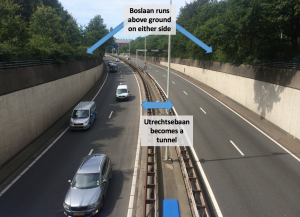 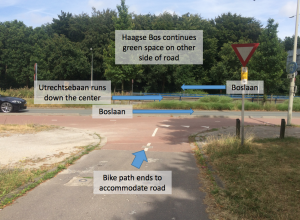 We thought of two design possibilities that would solve this problem. One idea was be to depress the motorway into a tunnel, at a point earlier than it is already, and extend the green space over it. The other idea was to build an elevated land bridge over the entire road. Both share the same general principle of making the road less visible and creating a wildlife corridor that would connect the two parks.

There is a proposed new motorway being added called Rotterdamsebaan that will also lead to the center of the city, which would decrease the amount of traffic that would need to use Utretchsebaan. That would mean that the lanes and capacity of Utrechtsebaan could also be reduced. 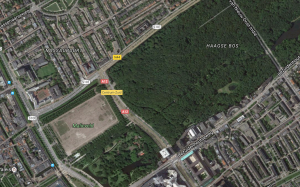 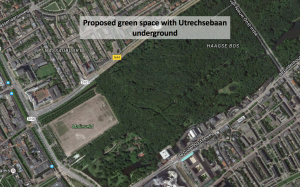 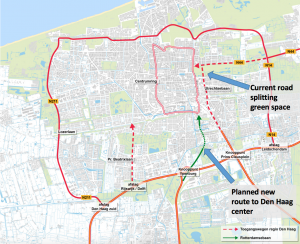 By combining both of the design ideas, the most complete connection between the green spaces can be achieved. Right by the intersection between Utrechtsebaan and Zuid Hollandlaan, the green space will be gradually elevated into a land bridge, with Utrechtsebaan traveling beneath it at ground level. This was chosen because depressing Utrechtsebaan at this point is not possible due to the intersection with Zuid Hollandlaan which is at ground level and will remain unaltered.

Shortly after the intersection with Zuid Hollandlaan, Utrechtsebaan will start sloping down into a tunnel, similar to its current design. Boslaan, which runs adjacent to Utrechsebaan but stays above ground, will be terminated at its intersection with Bezuidenhoutseweg. Bezuidenhoutseweg runs parallel to Zuid Hollandlaan bordering the other side of the two parks and can be seen on the maps above. By eliminating the restricition of having Boslaan above ground on this portion of Utrechtsebaan, the land bridge can follow the slope of the road until it meets the current ground level of the park. This will create a continuous green space for pedestrians, cyclists, and wildlife. 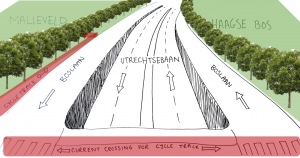 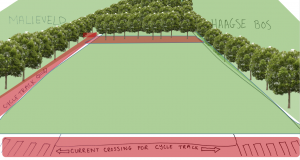