Through traffic barrier with except bikes sign on Caan van Necklaan

Reversing one way streets with bike contraflow reduces traffic volumes and speeds.  The one way streets converging prevent cars from going straight and forces them to go in a direction they might not have wanted to go; meanwhile, bikes can go in any direction. Reversing one ways discourages drivers from using the local streets as a through street and directs them onto parallel streets that are designed for higher volumes of traffic.

Reversing one way streets with bike contraflow and their objectives support the concepts of systematic safety in that they divert unwanted traffic and prevent serious injuries due to the fact that pedestrians only have to look one way for oncoming cars when crossing the street. The cars traveling on these streets will be forced to turn either left or right when coming to the intersection of Caan van Necklaan and Da Costalaan because of the through traffic barrier, blocking cars from continuing straight. These one ways also maintain the single function of the road to be local road, providing access to destinations such as residences. It is necessary to separate the functions of the road because it was not designed as both an local road and a through road; however, motorists realized that they could save time and use the neighborhood as cut through.

Da Costalaan and the surrounding streets have residences on either side.  Rijswijk is in a grid-like form, but the roads in this neighborhood are diagonal and lead to the main surrounding roads. Two of the outer streets are main through roads to commercial areas and nearby places of interest, making these streets a perfect cut through if it weren’t for the one way streets and traffic barrier.

For this neighborhood, the reversing one ways with bike contraflow is appropriate as it diverts unwanted traffic from the local road to the through roads while still allowing bikes to travel either way through the neighborhood to get to where they need to be. This discourages cars from using the streets as a cut through, but it encourages bikers to use the streets due to the lessened traffic and the fact that they are allowed to travel on any road regardless of where the cars have to go.  Overall, reversing one ways create safer roads and areas for those living, driving, biking, and walking through due to the lessened traffic volumes and the reduction in conflict points.

One interesting observation is that Caan van Necklaan is a two-way street due to the right angle parking and width of the road.  In order to reduce the traffic cutting through on this road, a through barrier was placed, forcing cars to turn right or left, but not allowing them to go straight.  While the reversing one ways on the other streets reduce traffic, the barrier on Caan van Necklaan also helps. The barrier; however, does not prevent bikes from passing through since there is a bike lane and with ballards through the barrier. 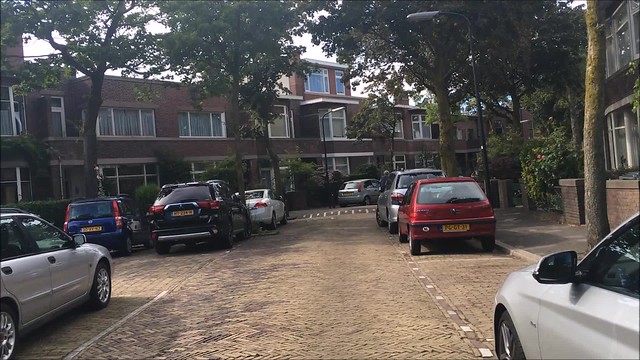