Bike boulevards are small, local streets with either one or two way car traffic and two way bike traffic. Most of the streets we looked at were main roads in Delft and were made smaller to go give bikes priority.  Often times before the demotion, reducing the number of lanes, these roads are through way streets with a lot of traffic and motorists. When bike boulevards are made today and are not historical, they do not need to be demoted and can just be made as a bike boulevard.  The traffic running through these streets primarily is reserved for bike traffic with the permission of cars as “guests”.

On these roads there are physical features such as chicanes, speed humps, rough pavement, parked cars, and dead end roads to reduce traffic and reinforce the set speed limits. Chicanes are small curb juts into the street which narrow the road and cause the driver to move slower in order to stay in the clear path. Speed humps are long rang speed bumps that will cause cars to bottom out if going too fast. In result, cars drive slower to save the underbellies of their cars from being scrapped while going over a speed hump. Rough pavement, though not an obstacle to pedestrians nor cyclists, is an added annoyance factor that makes cars move at a slower pace in order to avoid the rattling that a bumpy road can cause. Cars parked on the sides of roads isn’t an installed feature, but the vertical barriers made by the road causes a slimming effect to the road, making drivers slow down as they think the road looks narrower. Finally, road dead end and changes in allowed travel direction (one-way road reversal) deter through traffic by making it physically impossible to move through a road from start to finish, making the route less attractive to through drivers. These one-way road reversals do not hinder the travels of cyclists as semi-permeable barriers, usually vertical posts and signs, allow them to continue on the road while motorists must turn.

How were boulevards achieved?

Buitenwatersloot is a route that runs next to a canal.  It has one way traffic for cars, two way traffic for bikes, parking zones on either side/one side depending on the area, and a path for pedestrians.  This road was originally a historic main road connecting Delft to the nest town over. On this road, measures including speed humps and parking friction slow traffic. Through traffic is diverted with one-way road reversals and semi-permeable barricades at through-way-road-connecting intersections.  These barriers would divert traffic to nearby roads with greater carrying capacity. The roads that most of this traffic is diverted from have no use to non-locals as they feature mostly residential housing and limited shops. On different parts of Buitenwatersloot where other roads would meet, there would be an intersection with a do-not-enter sign that meets one of the main roads in Delft and the other side would have a speed limit sign of 30 km/h allowing cars to enter. In these areas there are sharks teeth, a row of yield triangles, to make the cars entering the street slow down and yield to moving traffic consisting of the occasional car and the frequent bicycle.  In order to maintain the speed limit, the road is made out of rough bricks, has parking friction, narrow passageways (12 ft), and speed humps implemented every 75 meters. 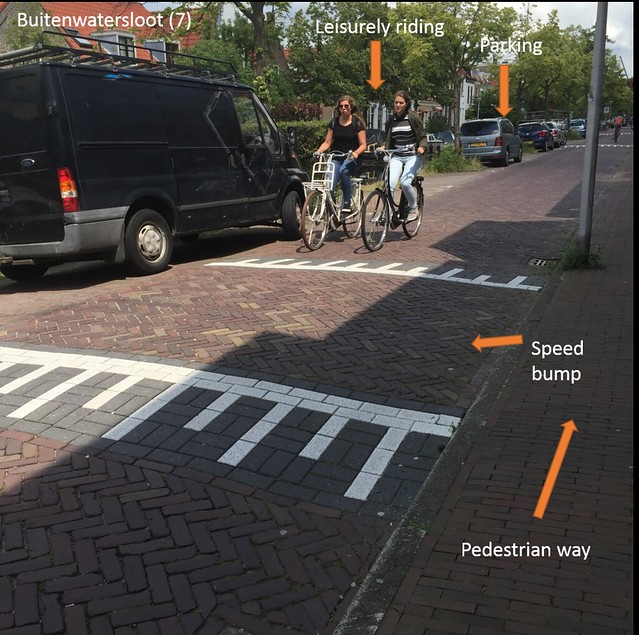 Buitenwatersloot road featuring speed hump (above), parking friction (above), and signs indicating speed limits and need to pay for parking (below). 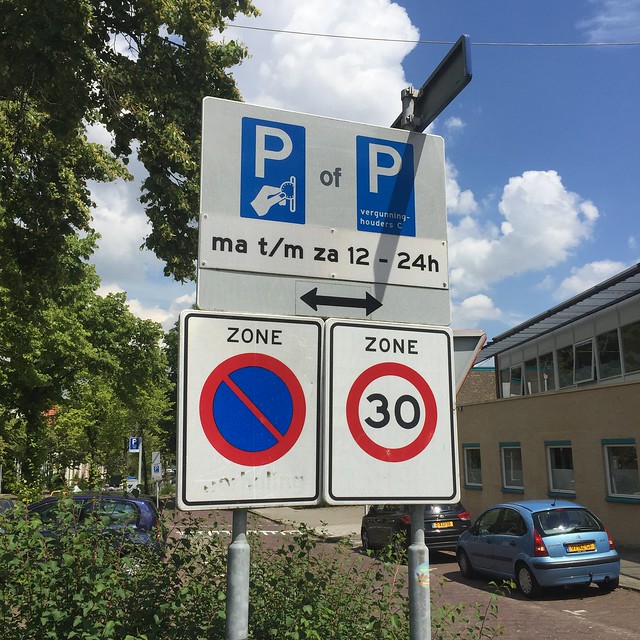 Abtswoude runs diagonally through a quiet neighborhood connecting the TU Delft campus with a small bridge to a canal-crossing bridge. Though the boulevard is not a boulevard through that section of the path, the remaining road which runs out of the small neighborhood is a shared bike boulevard with car traffic moving in one direction, narrow roads to keep speeds down (11 ft), and only residential parking for people living on Abtswoude. Abtswoude is also only a 30 km/h road and because of the limited traffic, a great number of cyclists avoid the segments which do have cycle tracks and just ride on the road instead. The boulevard turns into a street with bike lanes for a little while and then turns back into a boulevard. Like the other boulevard side of Abtswoude, it is a one way car and two way bike path with a speed limit of 30 km/h, speed humps, and a narrow street.  There are do-not-enter signs on most of the side residential streets, limiting the number of people who would want to get to their houses quickly. Because it is a direct route from the west to Delft, Abtswoude maintains a steady and hefty amount of cycle traffic consisting of students going to and from the TU Delft campus. For the section of the road that runs through the neighborhood, traffic is diverted with a dead end service road and parking for residence only. Other than that, there is no real use for the road, making it even more suitable for cyclists to use as a through passageway. 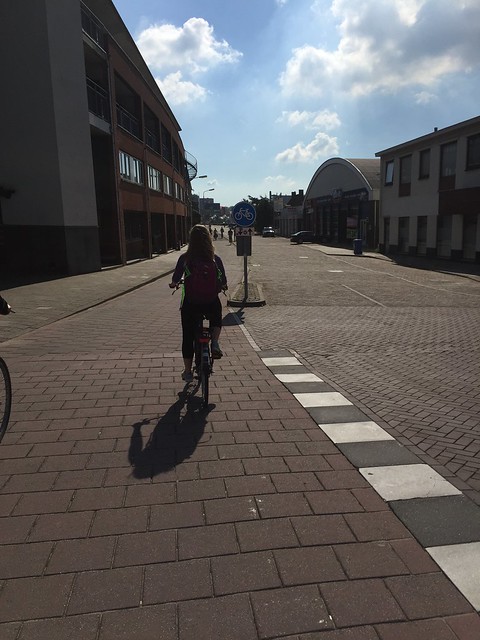 Abstwoude bridge going over canal (below) and through residential housing around supermarket (above). Signs indicating two-way cycle traffic (above). Side path must yield to through-way cyclists as indicated by sharks teeth (below). 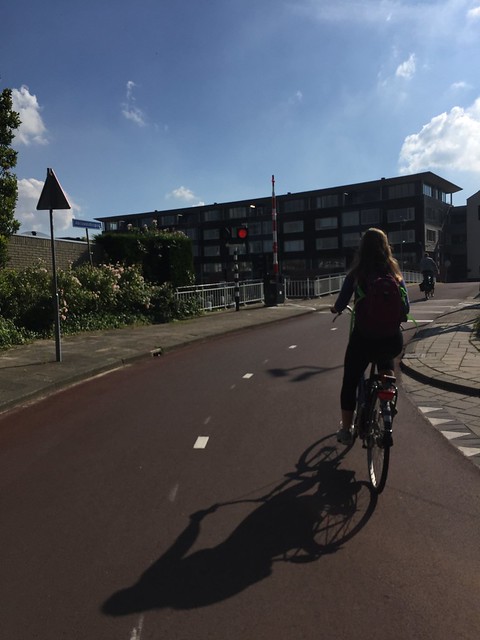 Oostsingel is another road that runs next to a canal. This road uses nearly all the same treatments as Buitenwatersloot with speed humps, narrow roads, and parking on one side of the road that creates friction for through traffic. Though on Buitenwatersloot the car traffic is only one way, Oostsingel operates as a two way road despite not having a centerline marked.  Since there is a tram stop along the road, it is necessary to have two way traffic to make it easy for those using the tram to reach the stop. However, the measures to slow down traffic limits those wanting to use road for other reasons such as shopping or as through drivers.  There are also chicanes on Oostsingel which are horizontal diversions, where the curb juts out and the road narrows to only let one car through at a time. Next to the chicanes, there are signs with white, red, and black arrows to let cars know which side has the right of way. At the meeting of perpendicular roads there are jogs, or a sharp curve in the road, acting as obstacles to motorists.  One end of this boulevard connects to the dog leg connection where the car traffic is only one way.  This intersection connects other bike paths with Oostsingel, allowing bikes to move easily through the network of bike paths.  Other parts of Oostsingel have bike lanes and advisory lanes. 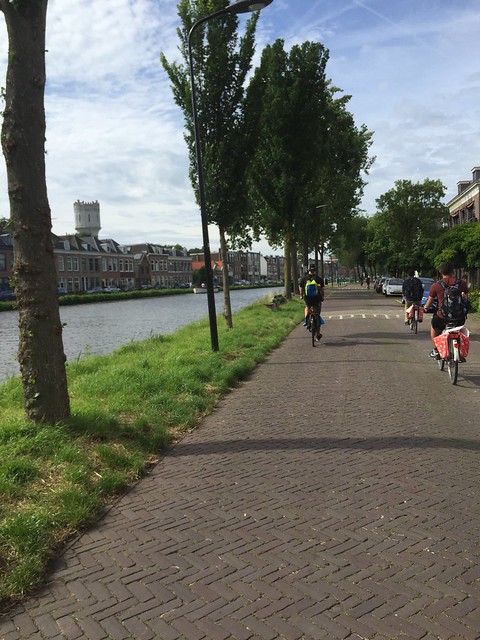 Implementation in US Corridor

Newbury Street is often flooded with locals and tourists scanning shop windows and eating local amenities. Because it is primarily a road for shopping, people often do not stick to one side of the road and will find a way to cross the two lane, one way road with or without a proper crossing to guide and protect them. Not only do they have to cross two lanes, but shopping pedestrians also have to maneuver around lines of parked cars on either side of the road, only giving them an even greater blind spot to see oncoming traffic. These dangers as a pedestrian are heightened as a cyclist trying to travel east or westbound using Newbury Street. On Newbury, cyclists have no other option in making the journey other than by riding with and as a part of traffic on a mixed, no separation road. This of course is an entirely intimidating factor to many cyclists who do not feel comfortable riding in the mix of cars, trucks, and scooters alike. In the mix, cyclists on Newbury have to be wary to not only the traffic surrounding them, but also the chance of pedestrians crossing suddenly, cars making quick merges and sudden stops to wait for parking lots, and a number of other ordinary difficulties of heavy road traffic.

In looking at the different types of biking facilities and infrastructure that could be implemented to Newbury Street, the bike boulevard provides the greatest fit for a road with such a dense population of shopping pedestrians crossing sporatically. A boulevard through Newbury Street would promote the flux of pedestrians on the shop-heavy strip with a greater space for them to occupy while also promoting the use of the lane for west and east travel for bikes as car traffic would be limited.

Though a cycle track would seem to be a better fit for the road to keep pedestrians and cyclists separated on the road way, such a set up would allow cyclists to go at high speeds on the track and there would be a greater chance of pedestrian-cyclist collisions. This demotion would be paired with a widening of the sidewalks on both sides of Newbury in an effort to keep pedestrians away from the narrowed roadway. The bike boulevard would be implemented between Massachusetts Avenue and Arlington Street but motor traffic would not be able to make it all the way through from one end to the other. With one way traffic heading east from Mass Ave and west from Arlington Street, motorists would meet at Dartmouth Street and those heading east would have to turn right and those heading west would have to turn left. This discourages motorists from using Newbury Street as only four blocks into the corridor from either direction, they would have to change course and head to either Commonwealth Ave or Boylston Street. In effect, this would be similar to cutting a diagonal connecting the southeast and northwest corners of the intersection, forcing people to stay within their allotted space. Though this intersection would be a diversion to all traffic, it would be permeable for bikes to continue their path from either direction they arrive from. Cars would be allowed to enter Newbury from the connecting side roads, but they would have to yield to oncoming traffic as the Newbury travelers would have the right away and no stop signs throughout. Like the other boulevards we have studied, the speed limit would be reduced to 30 km/h to make it safer for bikers and pedestrians alike.  To make sure that cars obey the speed limit, there would be speed humps, a rough brick road, and parking friction from two sided parking allotment.

By making the lane a bike boulevard and not a highway, shop owners and those living in the housing above the shops, would still have access to their residence with their cars and the constant flow of motor traffic would be diverted from their front doors. Not only this, but to further discourage non-local shoppers from parking, a Back Bay resident parking sticker or tag would be required to be able to use the space available.

In making Newbury a bike boulevard there would be some problems with cyclists-pedestrian collisions, but cyclists would just have to be cautious through the passageway during peak hours when people flood the area, and pedestrians would have to be aware that the path is also used by cyclists. Since Newbury connects to both Massachusetts Avenue’s bike lanes and the Boston Common’s motorist free paths at the east and west ends of Newbury, bikes can easily travel to different parts of the Boston area.