Traditional on-street parking is done right next to the curb with no barriers between each of the parked cars.  Parking bays also allow parking at the curb but have trees or greenery in front and behind every two to three spots, creating designated spaces for parking. The implementation of this treatment is used to make a road more bike friendly, green, and liveable while giving the cars designated space. Equally as important, it improves the functionality, the homogeneity of mass and speed, and the predictability of the road which are all concepts of systematic safety . 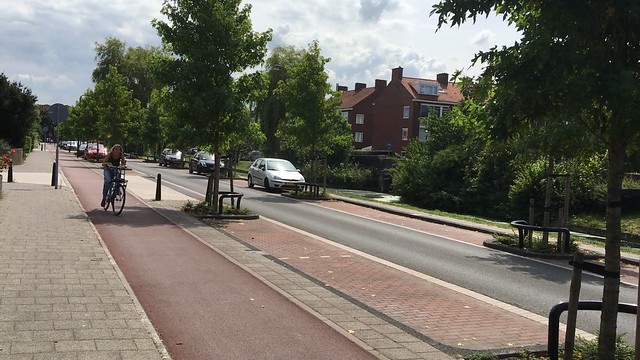 In the picture above, the parking bay is designated by the red brick section between two trees and the parking spots are shown using white solid and dashed lines. Previously, this street had no parking bays or cycle track, less greenery, and the bikes were riding in the street with cars. As cars were constantly speeding down this road, it was unsafe for bikers and residents. By utilizing the parking bay treatment, it created reasonable separation and safety with the added benefit of more trees.

In our example, they improved the functionality of this access road by narrowing the lanes, designating parking for the residents, and making it easier for residents to access their house via bike. The narrowed lanes ensure that the 50 km/h speed limit will be adhered to as previously cars used to drive down this road at 70-80 km/h. The designated parking adds to the narrowing of the lane and also reduces almost all chances of a biker getting doored. Additionally, the added bike lane helps with the lane narrowing and makes it so residences are closer to the roads biking facility, making it so they don’t have to wait for an opening in cars to start riding on the road. The separated areas for all users also adds to the homogeneity of mass and speed and predictability of the road as car and bike speeds are no longer mixed and a bike user now knows they won’t have to worry about cars.

Along Rembrandtkade, the area north of Lindelaan has been redesigned to include parking bays. Our site is an example of an appropriately used parking bay treatment. Not only does it add to the greenery of the neighborhood, it has also effectively reduced speeding down this road as stated by a resident on this street. Both of these factors along with easier access to biking facilities makes the area more enjoyable and liveable for the residents. The video below outlines key features along with a visual description of the parking bays, as well as the pervious conditions, of Rembrandtkade. 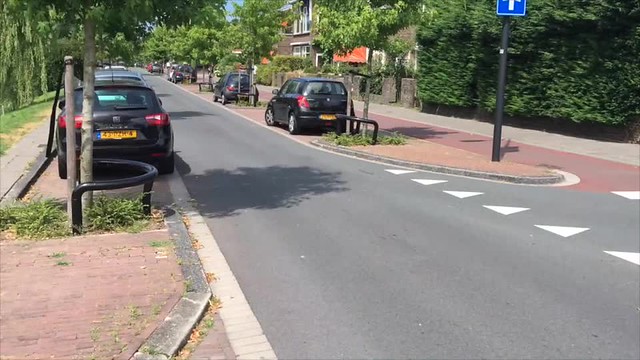