Throughout Project One, we rode through and observed different bicycle infrastructure throughout Delft and the surrounding areas. We were able to study six different forms of bicycle routes: bicycle lanes, bicycle boulevards (quietways), cycle tracks, advisory lanes, bicycle highways, and service roads. Bicycle lanes are simple cycle routes along roadways, approximately five feet wide, with little separation from automobiles. Bicycle boulevards/quietways are older roadways that are no longer major through roads that have become primarily bicycle roads. Cycle tracks are larger, usually two-way, stand alone roadways only for bicycles and run alongside roadways. Advisory lanes are roadways, approximately 20-25 feet wide, that have two direction traffic, no centerline, and two bicycle lanes. The purpose of these are to allow slow moving traffic (usually 30 km/h roads) an opportunity to use the center of the road as traffic rarely backs up along these roadways. Bicycle highways are faster-paced, long distance cycle paths with minimal entrances and exits and higher speeds. Finally, service roads are residential access roads (usually 30 km/h roads) along faster-paced 50 km/h roads in which bicycles and cars share road space in order for cyclists to avoid fast paced traffic, yet travel in direct routes. Service roads may make use of speed tables or other traffic slowing devices in order to force automobiles to slow down. Our group was unable to observe a service road in person during the cycle tours.

While bicycle lanes may be the cheapest to implement, they were clearly not favored among the group nor were they particularly safe. As seen along stop one and two, Nassaulaan and Julianalaan, the possibility to be “doored” was much higher any other cycle paths, and the only other possibility being advisory lanes. Because of this, and the cars oadiding along side, stress levels were high and unenjoyable. Along Nassaulaan especially, the lane does end for a distance as the lane gets narrower, as pictured below, causing increased risk and stress to the rider. One thing that was noticed along both Julianalaan and Nassaulaan was that cars were not always parked with the direction of traffic, something that is most usually the case in the United States. When it came to Buitenhofdreef, the combined right turn was extremely effective as traffic was forced to slow down to bicycle speed before entering the turn lane. A particular difference in road design for bicycle lanes came with the integration of bus stops and a divided area for pedestrians to stand and wait for the bus between the road and cycle paths, pictured below. 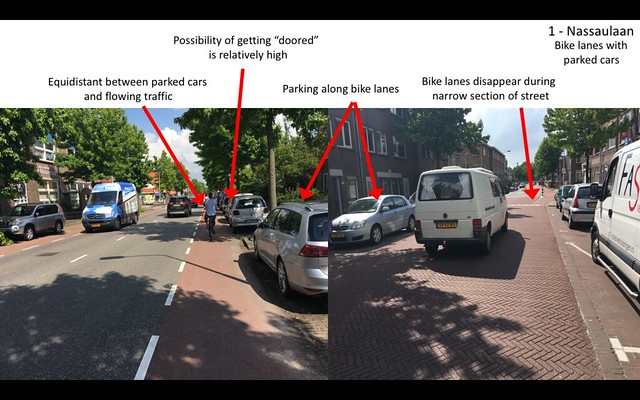 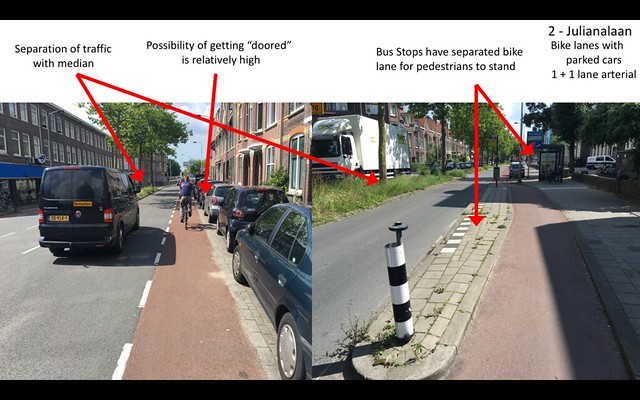 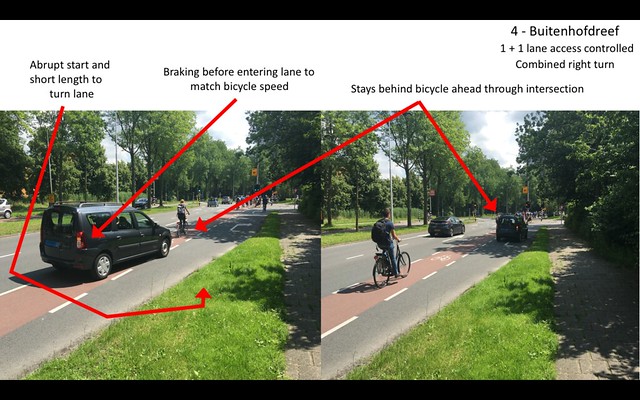 Bicycle Boulevards are a less expensive alternative to cycle paths as they require only old roads that are closed or partially closed to traffic that allow bicycles and pedestrian traffic to flow through. Although we were unable to ride on Abtswoude due to construction, we were able to ride through once on the first day. The ride was pleasant as there was no pressure from motorized traffic. One downside was the requirement to go up and down stairs for canals and transit travel. As for Buitenwatersloot, as pictured below, it was very clear that the priority and right of way of the road belonged to cyclists. Aside from businesses and homes located along this route, cars were forbidden and only public transit was allowed as through traffic. This quiet road-turned cycle path is a cheap and effective alternative to closing and redesigning low traffic streets. 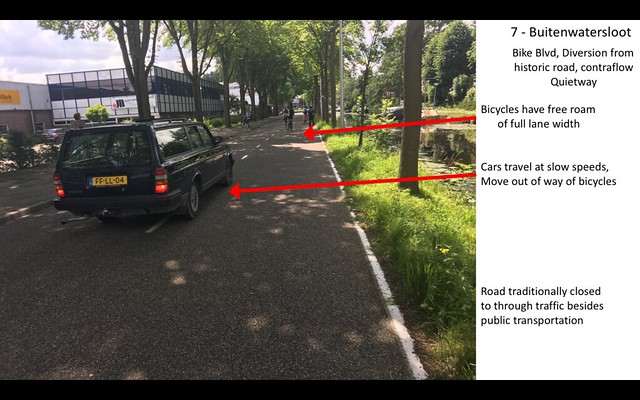 Cycle tracks, one-way and two-way, are a more expensive form of cycle path but benefit in safety and security. While riding along the parkway that was Voorhofdreef, the vertical and horizontal barriers with the road were the first experienced and immediately a stress reliever. When we rode along Papsouwselaan, the transformation from a 2+2 highway to a 1+1 roadway with large buffers and two-way cycle tracks create a much more comfortable ride along a strip of shopping. It was impressive to see on each side of the road available areas for pedestrians, cyclists, automobiles, and public transportation. As for the roundabout on this road, the design to give cyclists priority over cars as well as give one lane to automobiles in all directions appears to be beneficial as cars understand to be aware of pedestrians as well as cyclists at the intersection and yield accordingly. Ruys de Beerenbrouckstraat provides an example of a one-way cycle track in each direction. At the intersection of the supermarket, the cycle path is recessed to allow 90-degree eye contact with oncoming traffic. The crossing is also raised in line with the cycle track to provide priority to bicycles over cars and other motor vehicles. As seen in the picture, a truck accidentally pulled too far forward, causing a moped to swerve out of the cycle track. Additionally, if individuals ride the wrong way it can cause traffic and overcrowding on the narrower one-direction paths. Overall, these paths provide a safe yet expensive alternative to cycle travel along roadways. 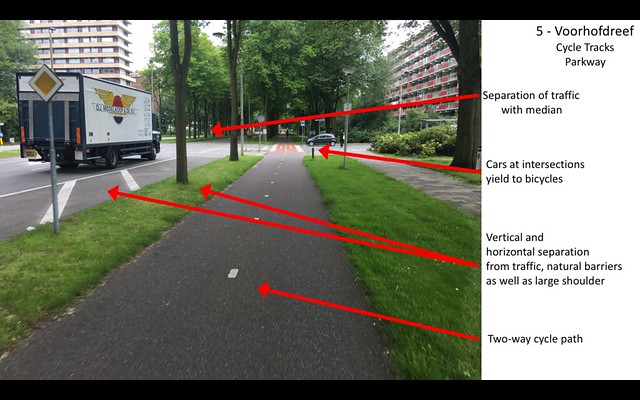 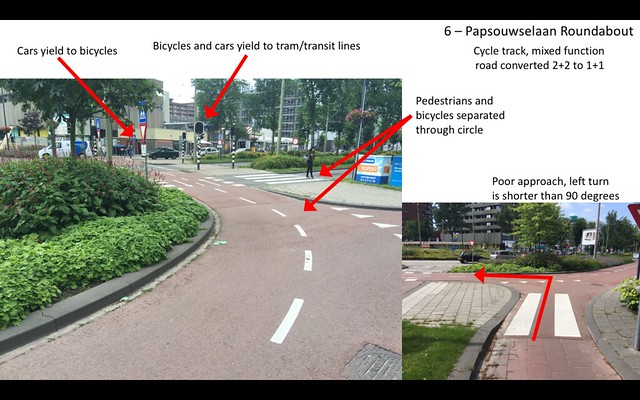 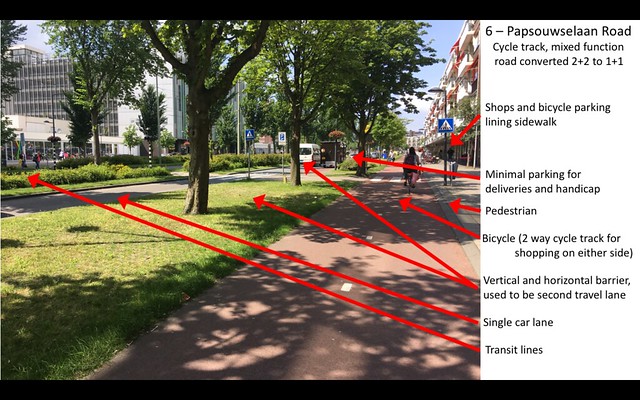 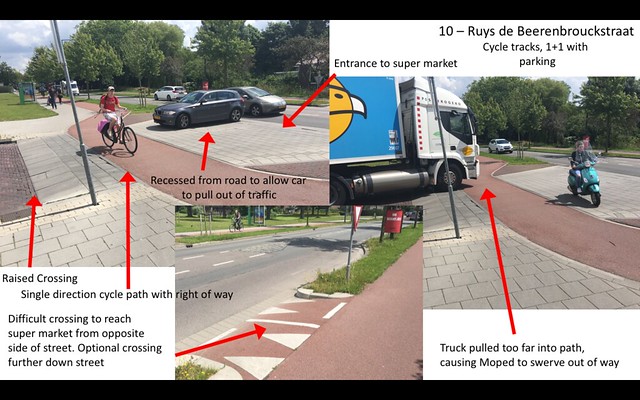 Advisory bike lanes provide a cheap alternative to roadways with an ADT of 2000-5000 cars per day. By coloring bike lanes on slower roads without center lines, this causes cars to ride in the middle of roadways when there is no oncoming traffic. When oncoming traffic comes into play, speed limits remain low enough that cars can enter into the bike lane for a short amount of time and ride with bicycles in order to avoid collision. With the avoidance of a center line, as pictured in the images below, cars are able to use the road as a one-way roadway when there are no other obstacles, yet still avoid collision with any oncoming traffic or bicycles. Difficultly came when approaching intersections, such as in Nootdorp, as bicycles and cars interact together, without the guidance of cycle stop lights. While the initial cost of implementation may be expensive, by adding pigment to asphalt, the lifelong use of the road and quality is much higher and will benefit in the long term. 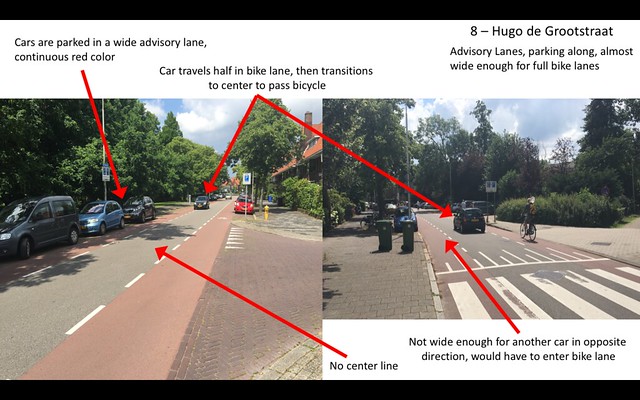 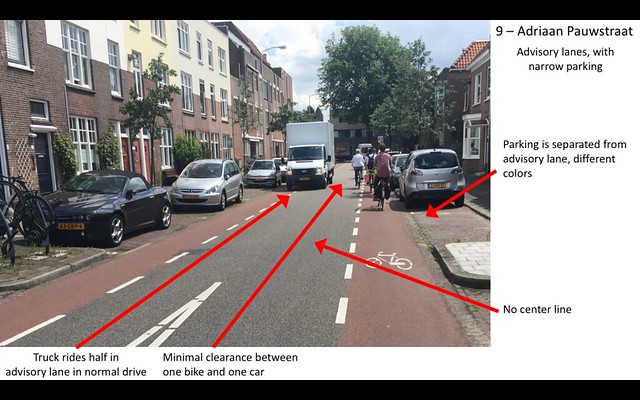 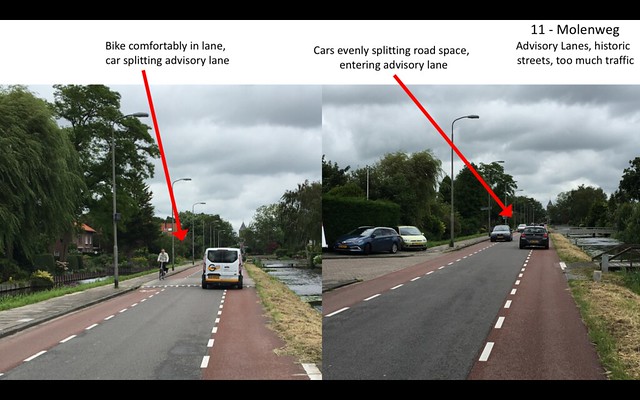 For traveling long distances, bicycle highways provide the most expensive, yet extremely fast solution to travel. These roadways, often two-way cycle paths with highway-like exits and intersections, allow fast paced travel with minimal interruption. Completely separated from automobiles on this path provides for safety and security similar to cycle tracks, and even more in areas with little intersections. As the N470 bike highway runs through a rural area, it is a very comfortable ride and leisurely travel can stay to the right as fast paced traffic passes to the left. The most difficultly comes with implementation of these, as Aaron Golub mentioned a tunnel like the one pictures could cost as much as $3 million. An image by Peter Kelly is provided below, as we did not stop to photograph this section. 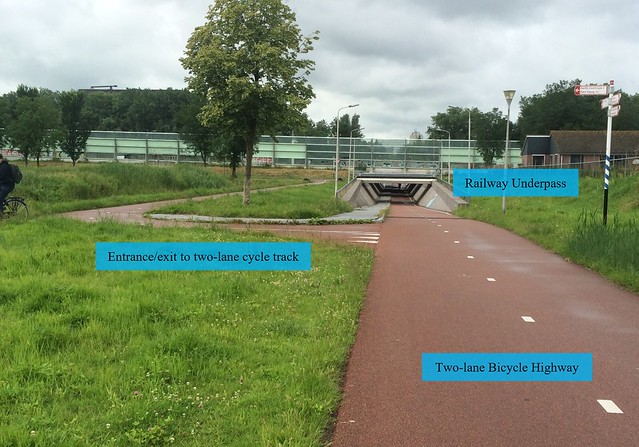