Bike lanes are one of the cheaper options when it comes to giving bicycles space on roads. As a cheap option, the defensible space is definitely decreased, but they serve their purpose well and the space they provide is safe when used correctly. The main convenience bike lanes provide is at intersections when bicycles can have a lane in between cars so turning left, and turns in general, are less confusing. You have to be more diligent when there is a heavy traffic flow, but otherwise these give you protected and understandable space in intersections. This could be seen multiple times at intersections such as the junction in between Julianalaan and Nassaulaan, along with Buitenhofdreef. Locals seemed very comfortable in these intersections, but seeing as I was inexperienced, I found them a little nerve-wracking. However, out of the intersections, the Bike lanes kept bicycle space on the side of the road fairly stress free.

There were some design flaws, as bike lanes had to be made with the space available, and therefore may not have always had space for a buffer in between parked cars and cyclists. Other than that constriction, though, the designs of intersections as well as the design of the School Zone in Nassaulaan show how well bike lanes can function. The design of the School Zone effectively reduced the speed of cars and bicycles by getting rid of the bike lane briefly, and then returning the bike lane and widening the road after it ended.

Overall, for their cheap cost of only painting lanes or laying different color brick, they do provide a fairly safe and defensible area for cyclists to ride alongside cars. The system could certainly be made better by more expensive designs, but on low speed roads and tough intersections, they help a lot and serve their purpose well for cyclists who make sure they pay attention to the surrounding traffic. 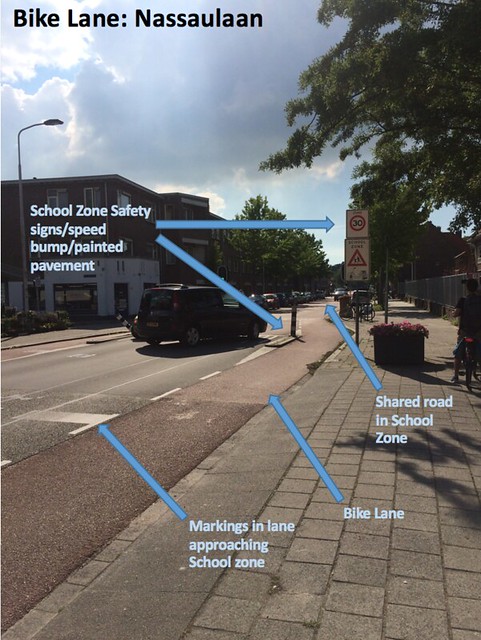 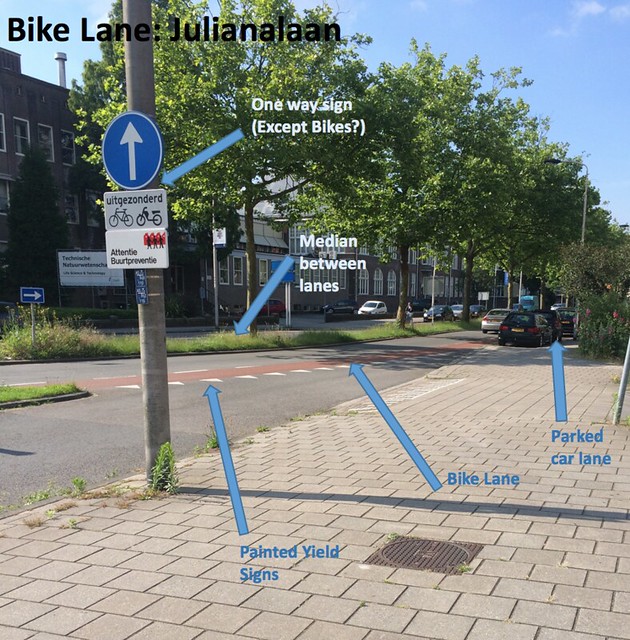 The sign that mentioned “except bikes and motorcycles” confused me a bit as it would’ve gone against the flow of traffic if it was followed. 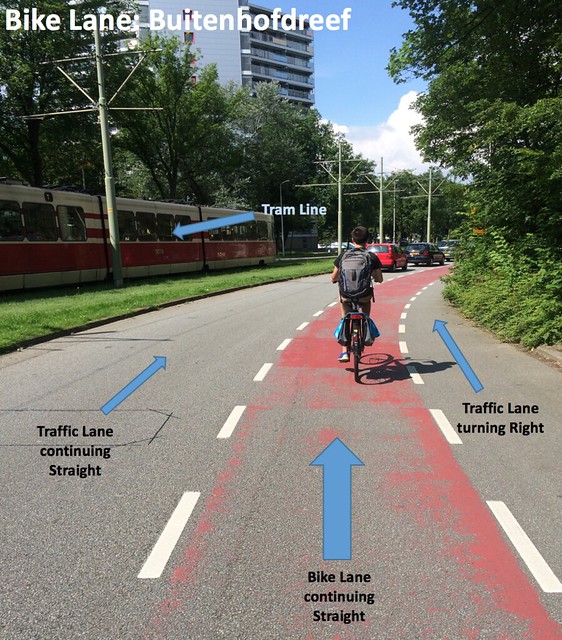 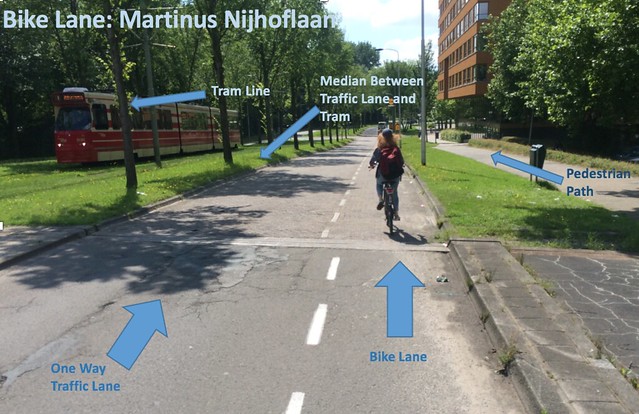 This type of bike infrastructure was incredibly safe, convenient, and pleasant to ride. Since they are generally out of the way of other paths, intersections, and cars, you can share the road with other bikes and at whatever speed you like. At the rare occasion that you did encounter a car, such as the ones that ventured down the one-way street of Buitenwatersloot, they went at an incredibly slow pace and knew to be cautious around all those bikes. There is a heavy bike traffic flow, but there is so much space on these roads that it is not a stressful environment.

These Bike Boulevards are usually based off of roads that are mainly now closed off to cars, so their design must be based upon where those roads already are. Usually these are convenient routes, such as Buitenwatersloot which was historically the connecting route between Delft and Den Hoorn.

Bike Boulevards achieve a great deal for being seemingly very cheap. Since they are just based off of roads that no longer hold car and motor traffic, they do not require too much major construction, and still supply cyclists with a spacious, convenient, and safe route where cars used to be. 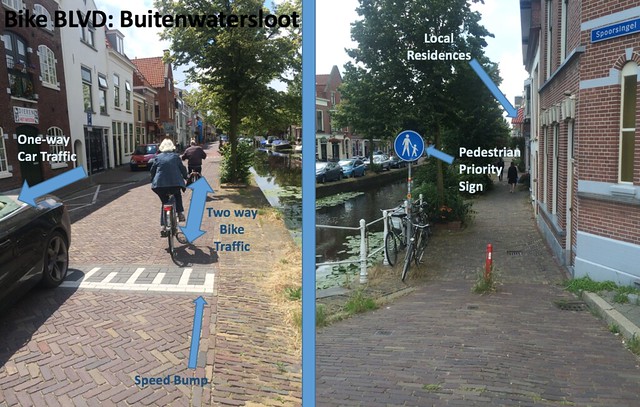 Cycle Tracks are a really great upgrade for safety aspects of bicycle infrastructure. Other than creating an entirely separate route for bikes to use, this alternative creates a separated path alongside car traffic lanes that gives the cyclists their own space removed from the friction of parked cars or moving traffic. For the most part, it is also incredibly convenient, although intersections can either get jammed with not enough storage space for stopped bikes or not enough places to turn left across busy streets.

They can come from great design planning or from utilizing the space given and putting the most cycle tracks in within the space given. In Ruys de Beerenbrouckstraat there were those space constraints of the road, but those constraints were taken care of by putting one lane of traffic going in each direction fairly close together, and pushing the pedestrian sidewalk closer to the residential homes. The intersection that joined to this road felt fairly close and even squished. However, Papsouwselaan and Voorhofdreef planned out these bike lanes with lots of space, and handled intersections with intricate roundabouts. Ruys de beerenbrouckstraat handled intersections with many yield signs and even some 2x yield signs for cars where bikes crossed.

Overall this achieves a well organized and safer cycling route, but for increased expenses. However, without spending that much, there’s virtually no way to create such a route. 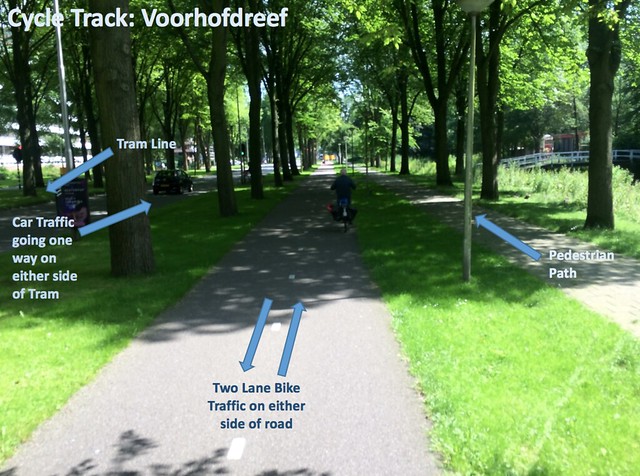 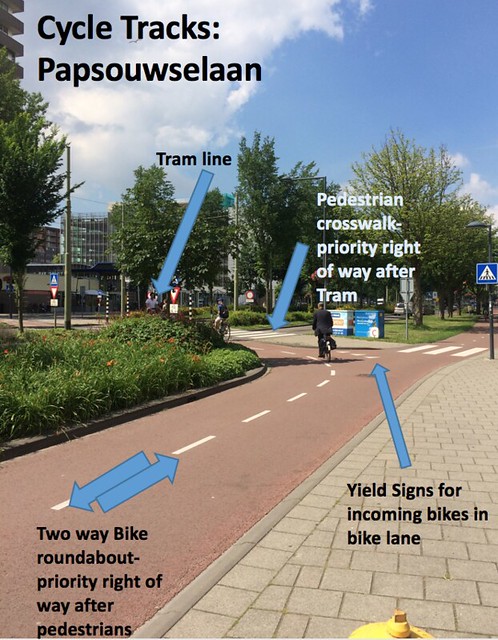 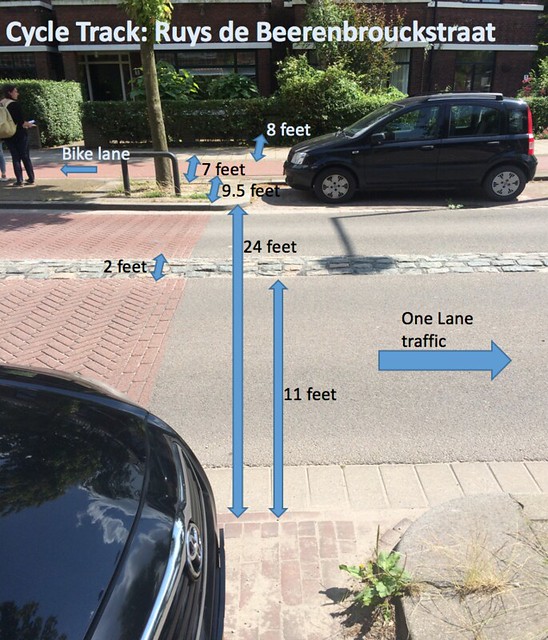 ** Approximate measurements of the road in Ruys de Beerenbrouckstraat

Advisory lanes are the best way to connect networks of bike paths without the major expenses. They fit in where no other bike infrastructure will, and help prioritize the connectivity of the bike network despite space constraints. They are incredibly convenient, the painted paths giving drivers and cyclists a better idea of where to gauge their path while also making cars more aware of cyclists’ space. It creates a mindset that rather than driving and moving to avoid cyclists, cars instead move to avoid other cars while giving cyclists space on the road. They make sharing a small road easier and safer for little cost, and remarkably aren’t hindered by design constraints or too much planning. No matter the size of the road, simply advising bikes to stay in one area and cars in another for the majority of their ride (unless there are passing vehicles) proves to be very effective. The power of suggestion just by painting advisory lanes is incredible. Most of the time, this is a cheap solution on roads that wouldn’t fit any other type of infrastructure. Since they are also only on low flow roads, or country roads like Schimmelpenninck van de Oyeweg, the stress level is still minimal while biking. 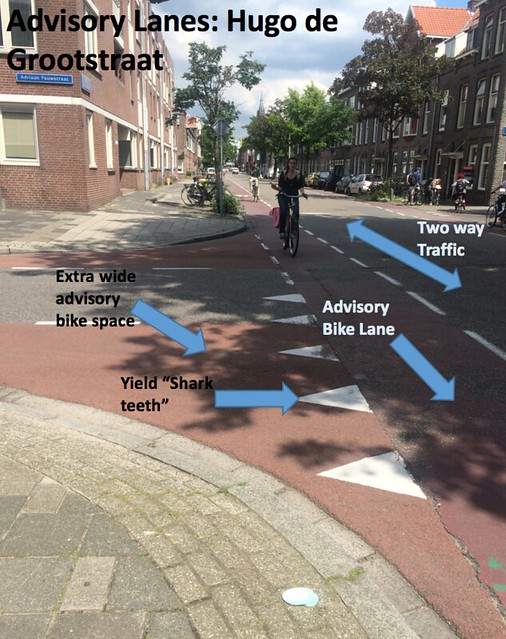 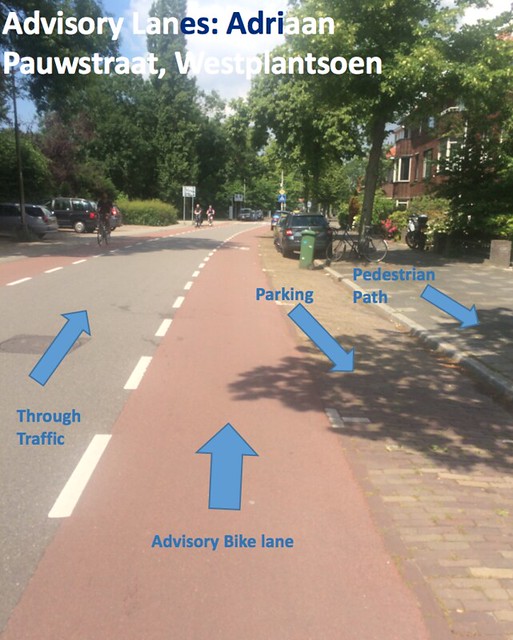 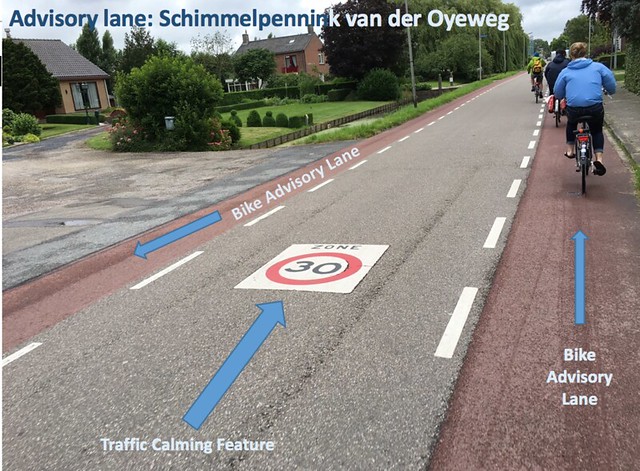 Service roads are major pieces of infrastructure that take a lot of design planning and spending, but achieve what no other infrastructure could in its place. By providing quiet roads alongside major distribution roads, these service roads give residential neighborhoods space to bike and drive to and from their homes with less stress. Not only that, but the breaking up of service roads so they only go short distances discourages the amount of cars that actually use them other than those that need it. Bike paths that connect the broken service roads means bikes are the majority of the vehicles that use them. This careful design is expensive, as service roads also include brick paving and speed bumps to discourage speeding, but in the long run is incredible Bike infrastructure. I found these to be very enjoyable to ride on and from one to another via connecting bike path. 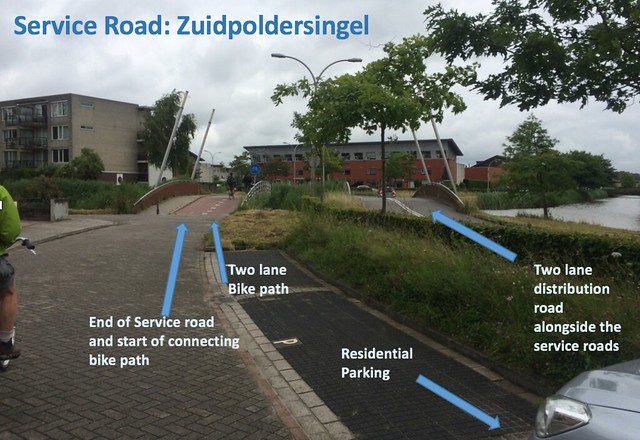 Another expensive piece of infrastructure, the Bicycle highway is one of the best ways to separate bikes from all other forms of traffic. As a separate route entirely, the Bicycle highway we took allowed us to go into the rural countryside away from where cars were allowed. It allows bikes to go uninterrupted for virtually 10 miles straight, and at the few intersections it does encounter, cars are required to come to an unusual full stop to give bikes the right of way. There is absolutely no stress on these highways, and they are safe and a great form of transportation. There are minimal drawbacks of needing lots of design planning as well as funding, and the slight problem of wind when the highway was elevated. 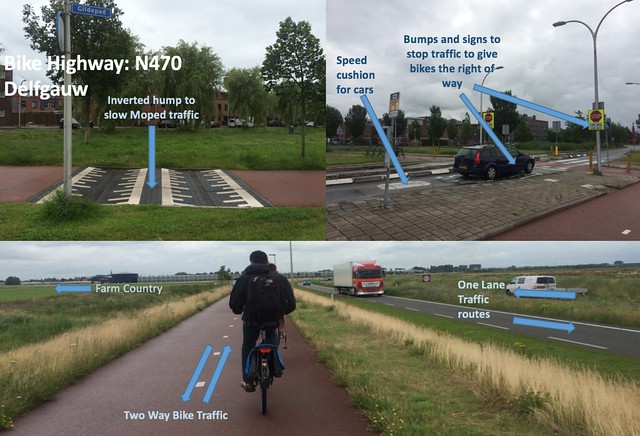 We observed some interesting infrastructure to help keep children safe who were riding bikes to school. An entire bike path was put next to the school although it was already on a road where bikes shared the space with cars in mixed traffic. Along with that, there was a separation of a hedge between the bike path and the adjacent street, and the adjacent street was closed off to cars and motorcycles from 8:00 to 8:30 on school days. The street itself was set up in a fashion that placed parking far away from the school, and instead placed it in the middle of two one-way streets that were separated by a median where the cars were parked. This effectively made the school a safer place to cycle to and from for the children. 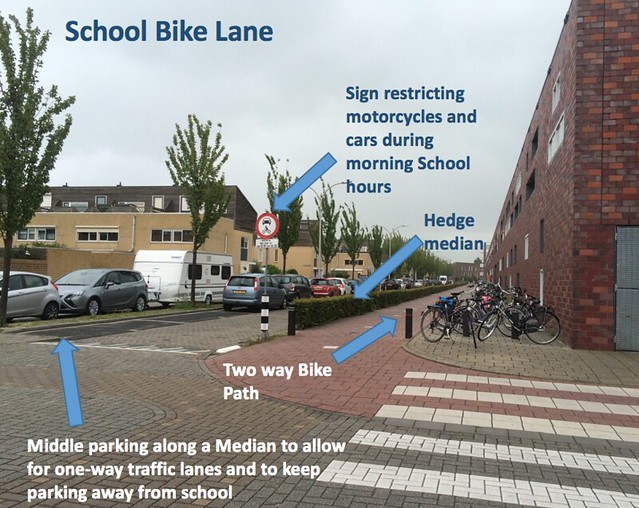