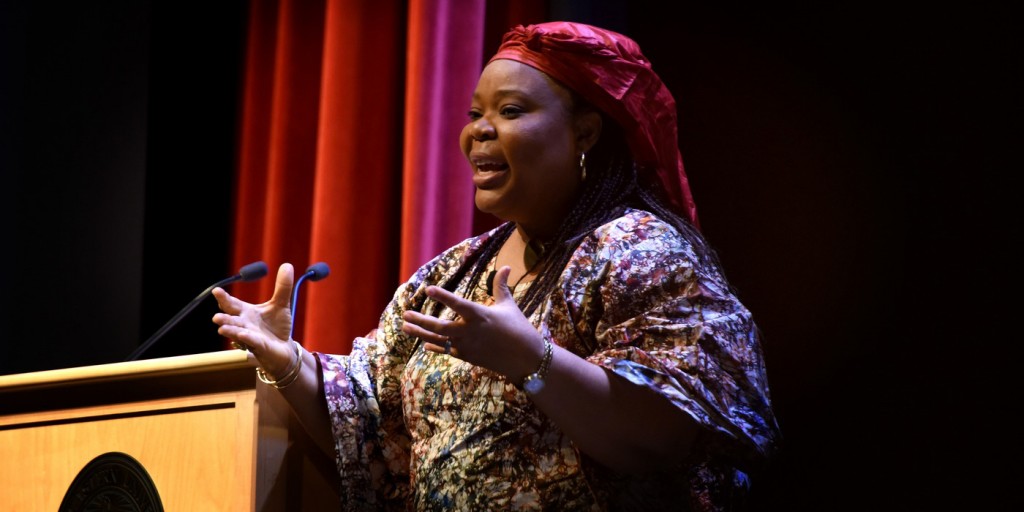 An annual tradition in the spring semester, the Seminar on Leadership, Research, and Innovation is Northeastern's first open-classroom style course designed collaboratively by students, and it features thought-leaders and change-makers from both inside and outside the university. The Scholars Seminar gives students insight into the groundbreaking work of Northeastern's innovative and distinguished faculty across the disciplines, as well as access to authors, activists, artists, and journalists who are shaping national conversations on issues of vital importance.

The Seminar on Research, Leadership and Innovation is presented by the Office of Undergraduate Research and Fellowships and the University Scholars Program; the Civic Engagement Program; the Ujima Global Leaders Program & John D. O’Bryant African-American Institute; the Honors Program; and Northeastern Center for the Arts. Learn about this year's lineup of fantastic speakers and join us on Thursday evenings in West Village F 20 (except when otherwise noted).

Questions for Seminar Speakers: Questions for speakers should be submitted using the online form. While questions are welcomed in advance of each seminar, they will also be accepted during the event itself. Questions are screened by the Faculty Fellows and Scholars Staff for salience and insightfulness. The Pack with the greatest number of questions asked at the end of the term will receive a special breakfast study break during final exam week. 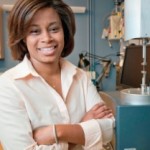 "For the Love of the Polymer Nano-Composite," Jan. 12, 2017
Marilyn Minus, Associate Professor of Mechanical and Industrial Engineering
Hear the ongoing story of the MINUS Lab’s research pursuits to develop the next-generation of high-performance fibers and materials. Dr. Minus' current research interests concern structure-property relationships in nano-composites and the fabrication and characterization of advanced high-performance polymer nano-composites.  Polymers of interest include mainly those of linear architectures and biopolymers.  Her work also looks at the interfacial interaction of these polymers with carbon nano-materials to understand morphological behavior in high-performance composites. Dr. Minus is a member of the Society of Plastic Engineers, American Chemical Society, and Materials Research Society. Prior to joining the faculty at Northeastern she was a Research Scientist at Georgia Institute of Technology in the School of Polymer, Textile, and Fiber Engineering. 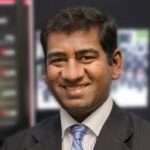 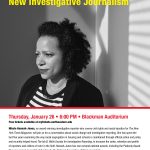 "Racial Injustice and the New Investigative Reporting," Jan. 26, 2017, Blackman Auditorium
Nikole Hannah-Jones, Staff Writer, The New York Times Magazine
Nikole Hannah-Jones is an award-winning investigative reporter whose work has focused on racial injustice. Hannah-Jones has spent the last five years investigating the way racial segregation in housing and schools is maintained through official action and policy.
She has written extensively about school resegregation across the country and the utter disarray of hundreds of school desegregation orders. She has also chronicled the decades-long failure of the federal government to enforce the landmark 1968 Fair Housing Act and wrote one of the most widely read analyses of the racial implications of the controversial Fisher v. University of Texas affirmative action Supreme Court case.
Hannah-Jones has won several national awards, including the Peabody Award and the George Polk Award. She was named Journalist of the Year by the National Association of Black Journalists. She is writing a book on school segregation called The Problem We All Live With, to be published by the One World imprint of Penguin/Random House. 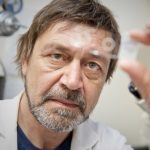 "Microbial Dark Matter," Feb. 2, 2017
Slava Epstein, College of Science Distinguished Professor of Biology
Nearly all of microbiology is built on the study of a tiny fraction of microbial life, perhaps less than one per cent, because most bacteria cannot be grown in a laboratory culture, the primary means of analyzing them. To counter this problem, Slava Epstein invented the iChip, a domino-sized plastic block on which microbes isolated from soil are placed. The iChip is then buried in soil in order to culture bacteria. Using bacteria cultured by the iChip, Epstein and Kim Lewis' joint efforts resulted in the discovery of teixobactin, a new antibiotic that can vanquish tuberculosis and MRSA. Epstein has been named one of Foreign Policy's most influential global thinkers and has been profiled by The New Yorker and many other publications. 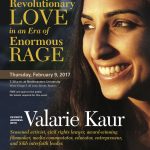 “Revolutionary Love in an Era of Enormous Rage,” Feb. 9, 2017, *7:30-8:30 PM*
Valarie Kaur, Keynote Speaker, New England Interfaith Student Summit
Valarie Kaur is a seasoned activist, civil rights lawyer, award-winning filmmaker, media commentator, educator, entrepreneur, and Sikh interfaith leader. Her new venture, the Revolutionary Love Project at the University of Southern California, champions the ethic of love in an era of rage. Kaur has made award-winning films and led national campaigns on civil rights for 15 years. Her activism focuses on hate crimes, racism and profiling, gun violence, immigration, solitary confinement, LGBTQI equality, and Internet freedom. She is the founder of Groundswell Movement, America’s largest multifaith online organizing community, and also founded the Yale Visual Law Project, where she trained students at Yale Law School to make films that change policy. Kaur recently served as the Media and Justice Fellow at Stanford Law School’s Center for Internet and Society, where she co-founded Faithful Internet to equip faith leaders in the fight for Internet freedom. Kaur was born and raised in Clovis, California, a small town near Fresno where her family settled as Indian Punjabi farmers a century ago. She was raised as a Sikh whose faith inspires a commitment to social justice. She became an activist when family friend Balbir Singh Sodhi was murdered in a hate crime in the immediate aftermath of 9/11. At twenty years old, she drove across America to chronicle hate crimes against Sikh and Muslim Americans. The journey led to the award-winning film Divided We Fall (2008) and initiated her work as an artist, scholar and activist. 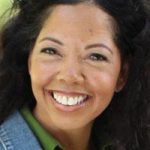 "Ending Gun Violence in America," Feb. 16, 2017
Lucia "Lucy" McBath, Moms Demand Action for Gun Sense in America
Lucia "Lucy" McBath has become one of the nation's most recognized and respected voices for common sense gun laws. McBath found herself in the middle of a mother's worst nightmare when her son, Jordan Davis, was shot and killed in a car in a Florida gas station after a day of shopping with his friends on Thanksgiving weekend in 2012. Finding purpose in activism, McBath became a national spokesperson for Moms Demand Action for Gun Sense in America. In her work as a gun safety advocate, she has testified before the U.S. Senate Judiciary Committee, Subcommittee on the “Stand Your Ground Laws: Civil Rights and Public Safety Implications of the Expanded Use of Deadly Force” as well as both Georgia and Florida State Legislature Committee Hearings for Repeal of the Stand Your Ground Law. Recently, she was invited to the White House for President Obama’s unveiling of My Brother’s Keeper Initiatives for minority young men. McBath's national television appearances include CNN, MSNBC, and Al Jazeera. "Experience Design for Dignity and Service," March 2, 2017
Miso Kim, Assistant Professor of Experience Design
Miso Kim's research focuses on service design, a branch of product and experiential design that, she says, “pays attention to—instead of a tangible product, like a chair—a broader and more abstract perspective: a system of communications, or an experience, or a community.” Kim’s work in the past has included redesigning an information system for the U.S. Postal Service and researching how to best preserve human dignity in various service fields. Her current project is to study and better define the sharing economy—a broad term used to describe everything from renting out a room on AirBnB to offering rides with Uber. “Technically when someone is using my room on AirBnB, I’m not sharing it; I’m making money because they’re renting it,” she says. “So I think we need to look a little more closely at calling it a ‘sharing’ economy.” She is also interested in new technologies like augmented reality and how they may impact the future of service design. 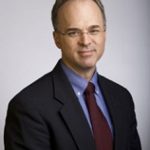 "How Can We Solve The Veterans’ Health Access Crisis?" March 16, 2017
Steven Pizer, Associate Professor of Health Economics; Director, Health Care Financing and Economics, VA Boston Healthcare System
Since 2014, Congress has appropriated over $10 billion to reduce wait times for veterans to receive healthcare. But wait times continue to increase, and veterans and health care providers alike continue to encounter bureaucratic logjams and delays in processing and payment. Dr. Pizer is approaching this problem through his experience applying advanced econometric techniques to large databases of health and economic information. In addition to his work on the VA healthcare system, Dr. Pizer also continues to be involved in budget forecasting to analyze the effects of the Affordable Care Act on other public programs.. "Molecular Processes in the Progression of Alzheimer's Disease," March 23, 2017
Lee Makowski, Professor and Chair of Bioengineering
Dr. Makowski's joint appointment in the Colleges of Science and Engineering reflects the boundary-spanning nature of his research. His latest research sug­gests that Alzheimer’s dis­ease may not progress like falling domi­noes, as con­ven­tional wisdom holds, with one mol­e­c­ular event sparking the for­ma­tion of plaques throughout the brain. Instead, it may progress like a fire­works dis­play, with a unique flare launching each plaque, one by one. “I believe the find­ings will pro­vide us with a new way of thinking about the mol­e­c­ular basis for Alzheimer’s dis­ease pro­gres­sion,” says Makowski. “Once you do that, you can start asking the right ques­tions about how to pre­vent it.” 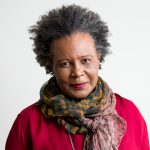 "Art in the Making of Citizen," March 30, 2017
Claudia Rankine, Frederick Iseman Professor of Poetry, Yale University
Claudia Rankine is a poet whose 2014 book-length poem Citizen: An American Lyric is a powerful and timely meditation on race, violence, and language in contemporary America. Citizen won the National Book Critics Circle Award for Poetry and the Los Angeles Times Book Prize, among many other honors. Rankine's work is distinguished by its experimental blending of genres and registers, mixing lyricism with social and literary criticism, visual composition, and other forms of expression. Rankine's boundary-crossing books are expanding both the definition of and the audience for poetry; Citizen was a New York Times bestseller in the "nonfiction" category, the only book of poetry ever to be so listed. In 2016, Rankine received the MacArthur Foundation "Genius Grant" for her body of "critical texts that are proving to be essential for understanding American life while also enriching the craft of poetry with a new sense of agency and urgency." 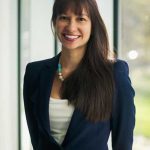 "The Politics of Crisis in Europe," April 6, 2017
Mai'a Cross, Edward W. Brooke Professor of Political Science
The project of European unity begun in the wake of World War II now faces unprecedented challenges: the impending withdrawal of the United Kingdom from the European Union, an enormous influx of migrants and displaced persons, repeated terrorist attacks, the rise of far-right political parties, a newly ascendant Russia, and a possible reduction in US involvement under a more isolationist administration. For insight into these troubled times, the Seminar turns to Mai’a K. Davis Cross, who is the author of three books, including The Politics of Crisis in Europe, forthcoming from Cambridge University Press. Dr. Cross is a prolific scholar and frequent public commentator on issues including security policy and European supranational institutions. She is also a term member of the Council on Foreign Relations. 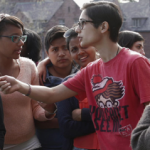 "Ricerche: three" Screening and Discussion, April 13, 2017
Brooke O'Harra and Sharon Hayes, Artists
Brooke O’Harra and Sharon Hayes will present and discuss “Ricerche: three,” a video installation that draws on interviews with 35 Mount Holyoke College students about their perspective on sex, sexuality, gender and the political realities that constrain and/or liberate them. “Ricerche: three” was presented at the 55th Venice Biennale in 2013. Brooke O’Harra is a professional theater director and an artist. She is co-founder of the NYC based company The Theater of a Two-headed Calf and has developed and directed all 14 of Two-headed Calf’s productions, including the OBIE Award winning Drum of the Waves of Horikawa (2007). Sharon Hayes is an artist who uses multiple mediums—video, performance, and installation—to investigate intersections between history, politics and speech. Hayes’ work has been shown at the Guggenheim Museum, the Tate Modern in London, and at the 2010 Whitney Biennial, among many other museums and galleries.