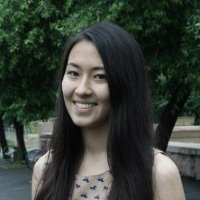 Vera Lee originally hails from Almaty, Kazakhstan. A tremendously gifted thinker, Vera earned national and international recognition at math and science competitions; she took second place in Kazakhstan's national math project competition and had a similar showing at "The Scientists of the Future" competition organized by Intel in Moscow. Vera was also named one of the outstanding young people of Almaty by the city's mayor. While she had originally intended to study math, Vera's interests have developed since her arrival Northeastern. Currently, Vera is pursing a degree in International Business with a focus in Germany and she is utilizing her prodigious math skills in the study of finance and statistics. For her first co-op, Vera travelled to Seattle to work as a Financial Analyst at Amazon.com, where she had the opportunity to work  both finance and business (vendor management) teams. Vera credits this first co-op with providing her a great deal of insight into the nature of the online retail industry, as well as with reinforcing her interest in her major.