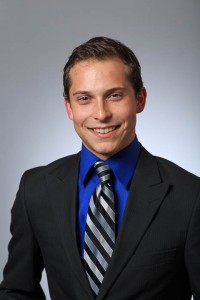 Nicholas DePorzio '17is a physics major from Chandler, Arizona. In his first year at Northeastern, Nick worked in Professor Swastik Kar’s lab researching the properties of graphene, which has been described as “the most remarkable substance ever discovered.” Taking what he learned there, Nick developed a liquid crystal “chalk” board that earned him the Husky Challenge prize. He also translated this interest and his great relationships with faculty mentors into a co-op of his own design at Italy’s Gran Sasso National Laboratory, where he worked as part of a team to understand neutrinos. He earned a Scholars Independent Research Fellowship to continue this work, which in turn became the basis of his application for the Barry Goldwater Scholarship. There, Nick proposes a novel scintillator application, which, by allowing scientists to detect weakly interacting massive particles (WIMPs) and anti-neutrinos, could lead to a better understanding of dark matter, the material that makes up most of the universe.