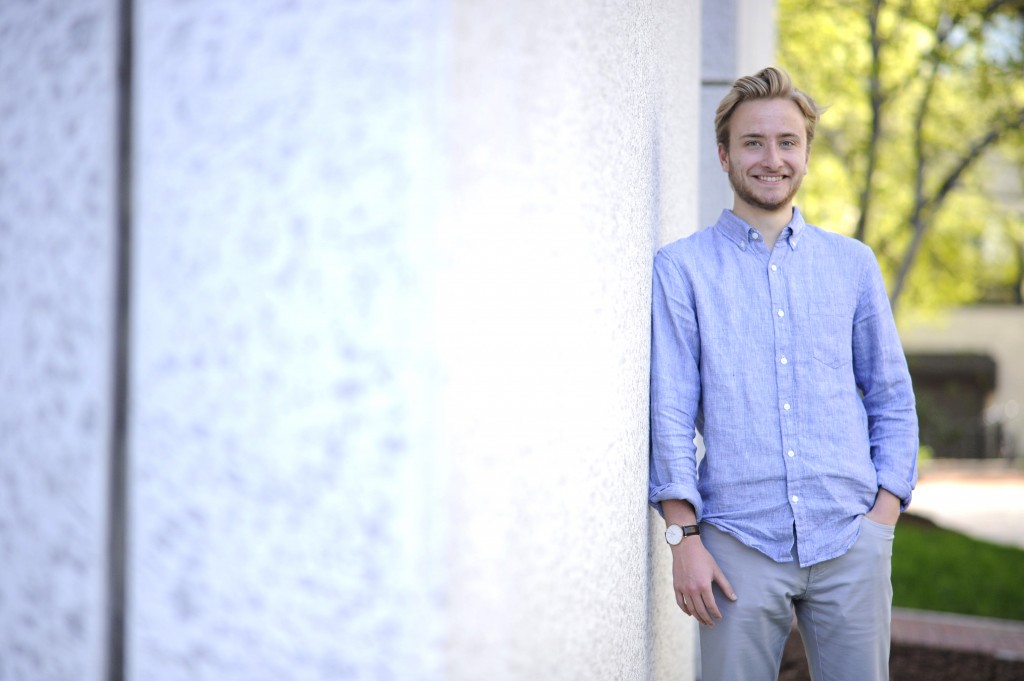 Matt Connolly, DMSB’16, is an entrepreneur who ran his business, M13Y, while studying at Northeastern. He also worked on co-op at Amazon as an undergraduate and will work there full time after graduation. He Photo by Matthew Modoono/Northeastern University

Matt Con­nolly started his first e-​​commerce busi­ness as a teenager out of his garage at his home in Troy, New York. The bud­ding entre­pre­neur came to North­eastern eager to take advan­tage of the university’s co-​​op and entre­pre­neur­ship pro­grams. Not only has his own busi­ness grown while he was at North­eastern, but Con­nolly, DMSB’16, worked on co-​​op at Amazon and has landed a job there after grad­u­a­tion. On co-​​op he was a member of the eCom­merce team and helped iden­tify and pro­pose a solu­tion to reporting gaps that were leading to mil­lions of dol­lars in under-​​capitalization of soft­ware devel­op­ment costs.

How did you get started with your first e-​​commerce busi­ness, World­wide Dis­count Emporium?

I started working in e-​​commerce when I was 14. I was looking for a job, but couldn’t find a typ­ical teenage job like working at a gro­cery store. I remember being on eBay and seeing that someone was selling gro­cery coupons—the coupons you’d cut out of the Sunday news­paper. I fig­ured I could do that too and make some money. So on Mon­days I would go to the news­pa­pers and get all the extra coupons they didn’t put in their Sunday papers, and I would sit there all week and cut out coupons and auc­tion them off on eBay.

How did the busi­ness evolve when you got Northeastern?

The com­pany evolved into M13Y around freshman year. Before then I was selling any­thing I could find. But I didn’t have any rela­tion­ships with whole­sale ven­dors; my mindset was ‘what can I find at retail and sell.’ That’s also when I started tran­si­tioning from selling on eBay to selling on Amazon. I decided to refocus and start going for whole­sale rela­tion­ships where I could move a lot of one product in bulk. I part­nered with a ware­house in Michigan. The four main pil­lars we have today are Gatorade, restau­rant sup­plies, Jelly Belly, and recy­cled wine corks used mainly for crafting.

Growing up I was doing this all out of my garage. When I got to North­eastern, for some reason I thought I could keep doing this from my dorm room in Inter­na­tional Vil­lage. I was moving a lot of stuff in and out, and always run­ning back and forth from the pack­aging store. By Christmas break, it became way too much to handle. That’s when I started looking for ware­house space.

We actu­ally use Ful­fill­ment by Amazon at M13Y, so when I started working there on co-​​op it was really inter­esting because I got to see the back end of things, visit the ware­house, and under­stand how all of Amazon’s auto­mated ser­vices work.

I wasn’t working in that area, though. My co-​​op was on the e-​​commerce plat­form team as a finan­cial ana­lyst intern. Ini­tially I remember being upset because I wasn’t going to be doing what I knew and what I loved. But it turned out to be a great oppor­tu­nity in the end because I already had a lot of knowl­edge about those areas of Amazon, and on co-​​op I picked up a ton of knowl­edge on a lot of things that were very for­eign to me. I saw a whole dif­ferent area of Amazon, and a whole dif­ferent area of business.

One of the areas the e-​​commerce plat­form team man­ages is internal tech­nology pro­cure­ment, which involves employees’ lap­tops and desk­tops. I did a project that took into account the costs of new lap­tops, and fixing them and the down­time asso­ci­ated with that. From that project, I pro­posed that Amazon change its pro­cure­ment policy. Employees were given lap­tops every four years, but through my project I showed that it would be cheaper to give them new lap­tops every three years. I pre­sented that to my man­ager as my final project, and it actu­ally ended up get­ting incor­po­rated into a report that went up to (Amazon CEO) Jeff Bezos, and they’re changing the laptop pro­cure­ment policy as a result of that project.

What will you be doing at Amazon after graduation?

I’ll be a finan­cial ana­lyst, and I asked to be placed on a dif­ferent team so I could learn more about new areas of Amazon. I still don’t know what team I’ll be on; I won’t find out until a month before I start. But for my pref­er­ences, I put down the Amazon Prime team, the trans­porta­tion team, or Prime Air team.

At North­eastern, you par­tic­i­pated in and later served as a mentor for the Entre­pre­neurs Club Husky Startup Chal­lenge. What were those expe­ri­ences like?

In the fall of my freshman year, two other stu­dents and I won the Husky Startup Chal­lenge. We devel­oped a startup called Coherent Clothes, the aim of which was to help men dress better using machine-​​learning algo­rithms. It would match them with clothes that fit their per­son­al­i­ties and body types well, and were within their price ranges.

Later I became a mentor for the Husky Startup Chal­lenge, working with a few com­pa­nies including New Grounds Food. It was inter­esting to see how they had great ideas, but all seemed to be missing one piece of the pie. So it was nice to sit down with them and pro­vide a dif­ferent per­spec­tive. Some needed to talk to more cus­tomers about their busi­nesses, and others waited too long to get their prod­ucts out there. And I could also help by lever­aging my ware­housing and trans­porta­tion connections.

What will be your fondest mem­o­ries from your North­eastern experience?

I chose North­eastern specif­i­cally because of co-​​op, and how it was dif­ferent than tra­di­tional schools. There was an entre­pre­neurial focus, and win­ning the Husky Startup Chal­lenge was pretty cool. That made me realize I fit in here, I’m doing well here, and I belong here. I’m also very good friends with the two other co-​​founders. Get­ting that big check from the busi­ness school dean was some­thing I’ll never forget, and also the friend­ships that came out of it are some­thing that is very powerful.

And I can also say I’ve never had a bad pro­fessor at North­eastern. From all my pro­fes­sors, I can point to some­thing that they taught me that I’ll con­tinue to carry forward.

What advice would you give to incoming students?

I would say if you’re pas­sionate about some­thing, follow it and find someone else who is pas­sionate about it or someone who can help you with it. At North­eastern, there are people from many back­grounds and who are doing a ton of dif­ferent things. You’re bound to find someone who can help you with some­thing, or find a pro­fessor who can cham­pion you for that cause. Take advan­tage of the net­work that is Northeastern.

Also, seek out people from all dif­ferent back­grounds. I went to an all-​​boys Catholic high school. It was very homoge­nous. When I came to North­eastern, I tried to break that homogeny. Having friends from all dif­ferent places and back­grounds helps you to see things a lot dif­fer­ently. And from an entre­pre­neurial mindset, it allows you to see a lot of new opportunities.