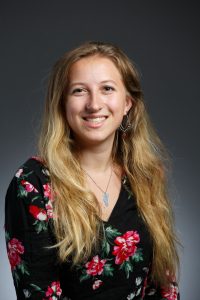 Rachael Phillips CSSH'21, a University Scholar with a keen interest and deep experience in Balkan languages, cultures, and politics, has earned the Boren Scholarship to support a year of linguistic and cultural immersion in Montenegro. The federally-funded Boren Scholarship promotes linguistically-intensive study abroad in regions and languages crucial to US national security.

Rachael, an international affairs major with an economics minor, has taken maximum advantage of Northeastern's global and experiential opportunities to develop her expertise. Her global experiences include a co-op in Sarajevo, Bosnia and Herzegovina, at Zene za Zene International, an organization that promotes women's economic opportunity and civic engagement. Rachael followed this with a research position at the European Public Law Organization in Legraina, Greece. Her research experience also includes two Summer Scholars Independent Research Fellowships examining university/host-community relations in the US, Canada, and the United Kingdom.

With the Boren Scholarship, Rachael plans to spend an academic year in Montenegro, perfecting her already-advanced knowledge of the Bosnian/Croatian/Serbian (BCS) language. Rachael says that to her, the Balkan region is a fascinating crossroads of diverse historical and cultural influences--and an active site in which disparate world powers are currently jostling for continued influence. This makes it essential, Rachael says, that the United States government employ area experts who speak the local language and have lived the local culture--precisely what the Boren Scholarship will enable her to do. Boren Scholars agree to a federal service commitment in exchange for the financial support, and Rachael aspires to help shape policy as a Foreign Service Officer.