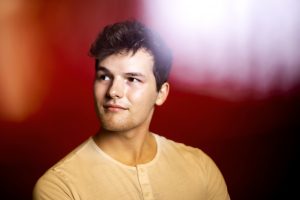 Studying a laminated poster of a human cell diagram on the wall of his fifth-grade classroom, with its kaleidoscope-colored blobs and globules the names and functions of which he barely understood, a young Jake Potts found his gaze wandering to the image of the endoplasmic reticulum.

Potts, a University Scholar, remembered observing how from a bird’s-eye view the circular grooves of the membrane system bore a striking resemblance to an orchestra. Only later in life did Potts come to understand the significance of that moment, epiphanizing, “A seed of synesthesia between biology and music took root in my soul.”

That was nearly a decade ago. Today, Potts is a bioengineering student at Northeastern on the path to earning a doctoral degree in genetics. He plays solo and ensemble violin as a member of the Northeastern University Symphony Orchestra and the Harvard Medical School Chamber Music Society.

In his third year of genetics research and eleventh playing violin, the harmony of these dual identities continues to pulsate within Potts. He imagines himself at once a composer whose imagination comes alive in the lab as he inscribes genetic code, and as a musician held captive to the whims of a conductor leading a string ensemble—much like the nucleus in a cell directs the synthesis of ribosomes.

As a researcher at Northeastern, Potts has applied his analytical and engineering mind to the study of genetics and disease in the classroom and in the lab, cultivating strong chemistry and biology skills required to work in gene editing. And, he has helped to develop better cancer detection methods from improved computational image processing.

Potts participated in a Dialogue of Civilizations program in Chile, where he acquired and analyzed samples of microbes from the Atacama Desert to search for new antibiotics. He also completed a semester abroad in Paris, where he joined a Sorbonne University lab and applied bioengineering concepts to optimize a protocol to study DNA resilience in tardigrades.

Potts has been awarded a Fulbright scholarship, a prestigious award that provides grants for research projects or English teaching assistant programs. He says he will use the scholarship to return to the Sorbonne to try to determine how certain cancerous mutations happen as DNA is “misrepaired,” a process that occurs when, say, radiation or harsh chemicals break the two strands of our DNA, and our cells respond by trying to repair this damage. His research could result in therapeutic strategies to prevent or slow the progression of cancer.

“I really took to not only all the fascinating gene-editing work they were doing there [at Sorbonne University], but the sense of camaraderie and candor I felt with them, and that’s what I have to look forward to,” Potts says.

Timothy Lannin, an assistant teaching professor of bioengineering at Northeastern who has taught three of Potts’s courses, including his capstone, where Potts helped develop a tool to investigate the mechanical properties of lung tissue, lauded Potts as a superlative student and researcher.

“I must admit that conversations with Jake have been so stimulating that I’ve missed my train to continue talking,” Lannin says. “He has synthesized knowledge from his other courses to teach me things I didn’t know about cellular engineering.”

Potts says he was proud and elated to have been chosen for the Fulbright. Past winners have included former United States Rep. Gabrielle Giffords, author Jonathan Franzen, and soprano Renee Fleming.

“It felt like validation of how I chose to approach genetics research,” he says. “I decided early on here at Northeastern that by working in various labs and thus putting myself into more environments where I have to learn anew, I’d gain a broader exposure to techniques and ideas, and challenge myself to be more creative. The result of that is my Fulbright project proposal, which I used concepts from different lab experiences to come up with. Now that the idea is there, I get to see if it works.”