The following story is from the College of Arts, Media, and Design. It features Matt Lewin, a University Scholar and member of the band Tipling Rock. 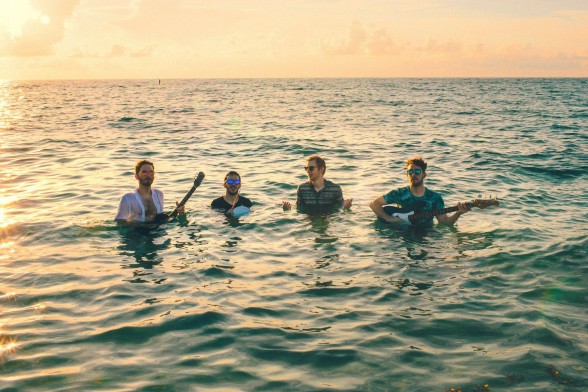 Three Northeastern students’ indie rock band, Tipling Rock, has been getting noticed lately – on Spotify and beyond. They recently topped Spotify’s Global Viral Chart as well as viral charts for the U.S. and several other countries. Three of the band’s four members – Dillon Salkovitz, Matt Lewin, and Ben Andre –  are Northeastern students with majors and minors in CAMD’s Music Industry program. While they all have additional academic interests and have done diverse co-ops during their time at Northeastern, Tipling Rock has been a hands-on application of everything they have learned in their Music Department classes.

Most of the band members have been making music together since high school, honing their style and their band name as they moved the jam sessions to their dorms at Northeastern. The name Tipling Rock came from a landmark in Sudbury, MA, where three of the band mates (including Tommy, the band’s drummer who is in college in Rhode Island) went to high school. The name had a nice ring to it, and they dropped the second “p” so they would not have to compete with the actual landmark for Google search results. That is just one example of how Dillon, Matt, and Ben combine their passion for music with a keen business savvy.

When it comes to their instruments, most band members consider themselves to be self-taught, so it comes as no surprise that they record, produce, and mix their own songs. Ben is the songwriter, and his goal is to let the music inspire the lyrics. He also keeps their fans in mind as they craft uplifting songs that they think will resonate with their audience. They credit their robust music knowledge from music theory classes they have taken at CAMD. As Dillon puts it, “We’re nerds when it comes to music theory, audio engineering, and music production.”

Their first single was “Punch Lines and Good Times” but it was their more recent release “Low Tide Love” that caught global attention.

“Anyone can get on Spotify, but the hard part is getting noticed in such a huge crowd,” explained Matt.

And Tipling Rock was certainly noticed. After they topped the Global Viral Chart, Spotify invited the band to visit its Boston office and learn about how music gets discovered on Spotify, an area the company is really focusing on in order to help give indie artists a chance in the industry. “Low Tide Love” was featured on the Fresh Finds playlist, created from a mix of an algorithm that identifies trending tastemakers and a human editorial curator who selects songs from that pool. Tipling Rock even got to meet the Spotify employee who first put their song on the playlist. Being featured on that playlist increased their fan base substantially and catapulted them to the top of the Global Viral Charts, the US Viral Chart, and several other countries’ charts. The song stayed at the top for five exciting days of watching the rankings and sharing screen shots.

When it comes to navigating the industry, they turn to their class notes from Music Publishing and Copyright Law to guide them.

“With the success of ‘Low Tide Love,’ we started getting a lot of attention from different people and with that came contracts,” explained Matt. “We are tasked with figuring out what is a scam and what is worth pursuing. Our Music Industry classes were the most useful in helping us navigate the legalese and how to identify opportunities we wanted to pursue.”

“We do have a lawyer now to look over those documents,” Ben added, “but it’s still helpful that we are able to do a first glance. The industry classes taught us everything we know about that.”

As students in Boston, they are taking advantage of the city’s vibrant music scene.

“There is definitely a scene here,” said Dillon. “With so many neighboring colleges and venues, there are a lot of young musicians and a lot of art and culture.”

The band has been playing gigs around town, with one highlight being a sold out show at the Red Room. Lately, however, they have taken a step back to develop a strategy as their momentum continues to propel them forward. At this point they find that it is much more effort and cost effective to release singles than to produce a whole album, so that is where their focus lies in terms of making music. For performing, they are working on landing opening slots for bigger name shows. While a full-length album may be the future (which they lightheartedly told us would only be released on vinyl), digital distribution has been their primary method of gaining exposure so far, and it is definitely working.

Check out their music on Spotify and SoundCloud.