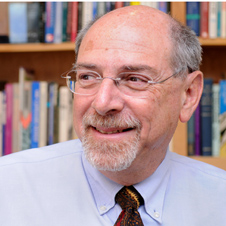 On March 13th, 2014, the University Scholars Seminar hosted a lecture by Professor Barry Bluestone on "The Great U-Turn: Inequality in America 25 years Later." At Northeastern, Bluestone is the Stearns Trustee Professor of Political Economy, the founding director of the Dukakis Center for Urban and Regional Policy and the Dean of the School of Public Policy and Urban Affairs.   A native of Detroit, he earned bachelor's, master's and doctoral degrees in economics from the University of Michigan. His areas of specialization include political economy, public policy, labor economics and industrial relations.  Prof. Bluestone has written hundreds of scholarly articles and authored/co-authored 11 books, including Negotiating the Future: A Labor Perspective on American Business and Growing Prosperity: The Battle for Growth with Equity in the 21st Century. He has been a policy adviser for local, state and national officials and representatives.

At the onset of his presentation, Bluestone recounted how he started his work on the issue of inequality in American by posing a simple question: what happened to the American Dream starting in the 1970s?  Why did the United States evolve from a country that excelled in delivering economic growth as well as greater equity, into a nation where stagnation and inequality were growing at an alarming rate?  Prof. Bluestone famously called this reversal in economic fortunes as the “Great U-Turn”, where for over the past 30 years, the rich are getting richer and the poor are getting poorer.

What are some of the underlying factors that have fostered this “Great U-Turn” in economic equality? Prof. Bluestone proceeded to examine the usual suspects -- i.e. technology, deindustrialization, deregulation, declining unionization, downsizing, "Winner-Take-All" labor markets, free trade, capital mobility, immigration and trade deficits. He then remarked that, given economic and political realities, we can make only modest changes in current generation income inequality. In this context, several things can offer a bit of help -- such as providing for life-long education and continuous retraining, encouraging a manufacturing renaissance, organizing the unorganized, promote fair trade policies,  raising the minimum wage and index it to the CPI, reinstituting more progressive income tax rates at the federal and state levels, and increasing the poor's access to food stamps and affordable housing.

However, Bluestone underscored that we might have much better luck in reducing intergenerational income immobility by providing universal high quality prenatal care for every child, community-based parent effectiveness training to all parents and caregivers, universal early year-round childhood education to all children, better public schools, extensive opportunities to participate in extracurricular sports, arts, and culture programs, summer camp experiences for young children, summer jobs for high school kids, top-quality vocational education programs for kids not going to college, and increased access to affordable higher education with coop work opportunities for those who go.  This will cost a fortune, but only for one generation.  Which would constitute an improvement with respect to the billions and billions we spend on one generation after another, who do not benefit from optimal childhood opportunities.