Mason Gersh, CSSH '18 reflects on his experience with the University Scholars Dialogue to Istanbul and Berlin. 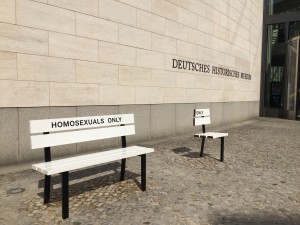 As a queer Jew, and one that has grow up in a very open and embracing environment at that, my trip to the German History Museum was one of the most rewarding experiences in my recent memory. The exhibit I visited, called Homosexuality_ies, filled the gap in the documentation of the lives of queer citizens of Germany since the emergence of a homosexual identity nearly a century ago. The exhibit explored the objects, art, memories, and collective “positive counter-images and representations of gay self-confidence as diverse as they are sensual”, and this positivity and celebration were directly juxtaposed with the Nazi treatment of the LGBT community during their reign. Throughout my time at the exhibit, I found an exploration of facets of my identity that I never knew existed, and I believe I came away with a greater sense of self, empowerment, and solidarity with the global LGBT community than ever before. 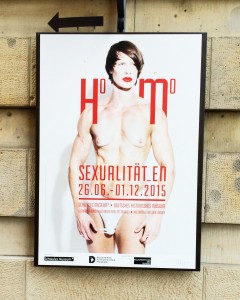 To begin, one piece of the exhibition that immediately caught my attention and shed light on my own struggle for self-definition was a section focusing on the use of the term “queer” throughout history. I have long identified with the term “queer” over other more sectarian identifiers such as “gay man”, but have constantly been challenged by both my surroundings (those who believe the term still holds a negative connotation) and myself as to why the term is a good fit. The museum, unlike any LGBT work I have seen in the U.S., detailed the evolution of the term beyond even a breakdown of LGBT divides and into a realm of social justice for all regardless of gender or sexual orientation, race, or socioeconomic class. This expansion of the term queer into other minority struggles is one that I am proud to incorporate into my own identity as a global citizen moving forward; and I believe as LGBT rights become mainstreamed in the west, the term can have powerful alliance-building and progress-inducing potential for those who’s rights have yet to be realized.

Additionally, I was deeply affected by the last room of the exhibition highlighting the phrase “the personal is political” and its beginnings in the new women’s movement of the late 1960’s. This portion of the exhibit catalyzed a connection in my mind between the ability to promote one’s own “positive homosexuality” onto the public sphere and the creation of a more just world via the principle of exposure alone, like the U.S. saw during the AIDS crisis. This connection has implication both for my own self-expression and for the visibility of the Turkish LGBT community I focused on during the dialogue’s time in Istanbul. While the Turkish LGBT community has experienced significant gains in the past decade, much of that progress is at risk by the increasing cultural policing of the Turkish state under Erdogan, and it is up to activists both in Turkey and abroad to fight for their rights and freedoms by imbuing the principles of the phrase “the personal is political” into their struggle and capitalize on their newfound visibility. As for me as a member of the LGBT community in the west, this phrase has given new meaning to the ways in which and aims for which I chose to express my gender and sexuality. By living as openly as possible and refusing to conform to heteronormative practices, I now believe I can stand in greater solidarity with those in the queer community who need it most, and can better bond together with minorities across the globe in search of creating a more just world.