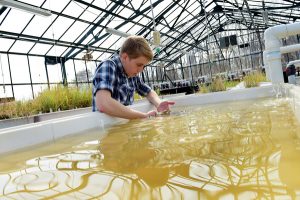 University Scholar Benjamin Moran COS’18, a marine biologist dedicated to using his prodigious talents to preserve the oceans at a moment of unprecedented ecological and political crisis, has been named a Knight-Hennessy Scholar at Stanford University. Knight-Hennessy Scholars are selected on the basis of their capacity to drive change while addressing major global challenges, and the award provides not only a fully-funded graduate education, but also leadership development, mentorship, and experiential opportunities to maximize the Scholars’ future impact. Ben, who will pursue a PhD in biology at Stanford, is one of only 69 people worldwide selected for this highly prestigious honor.

Ben came to Northeastern from the small community of Minerva, Ohio, where he grew up on a family farm far from the ocean but close to nature. At Northeastern, where he was a member of the University Scholars and Honors programs, he wrote a record of groundbreaking research, transformational leadership, and community outreach that resulted in his earning every possible internal award and a slew of nationally competitive laurels as well. “Ben is certain not simply to become a research scientist and marine biologist of the first order,” said Jonna Iacono, who as director of the University Scholars Program worked with Ben throughout his five years at Northeastern. “He also promises to become a bridger of the divides that have precipitated our crises.”

Described by Marine and Environmental Sciences Department Chair Geoff Trussell as “an intellectual tour de force” and “an amazing talent,” Ben began working in a lab as soon as he set foot on campus. He joined a team assembling a de novo central nervous system transcriptome of the brown ghost knifefish and is listed as an author of a resulting scientific paper. Next, Ben won a Summer Scholars Independent Research Fellowship to fund a project of his own design, in which he generated transgenic zebrafish to investigate the expression of the bloodthirsty gene. Following this, he completed a first co-op at the Marine Biological Laboratory at Woods Hole, culminating in another publication. Later, at the Southwest Fisheries Science Center, he worked to remove an error in a fisheries management tool that could lead to 5-10% over- or under-harvesting in fisheries worth hundreds of millions of dollars. The software package he developed has already been adopted by the Alaska Department of Fish and Game and is expected to become the industry-standard tool in fisheries management.

Having become acquainted with Dr. Oscar Puebla as a part of Northeastern’s Three Seas Program, Ben began studying the hamlets, a group of Caribbean reef fish. Ben’s fieldwork revealed, quite unexpectedly, that populations of the Maya hamlet are in severe decline. By sequencing the Maya’s genome, Ben determined that the Maya is as distinct from the blue hamlet as any other hamlet species; that the Maya has declined in population size since its divergence from all other hamlets, while the others have grown in population; and the Maya’s total population size is likely less than 1,500 individuals. As Ben has progressed through these experiences with oceanic life, his goals have broadened from understanding creatures to driving collective action on species conservation – and the Maya hamlet is emblematic of this. Ben will submit his IUCN Red List Assessment that he hopes will earn the Maya an Endangered status and in parallel, he hopes to publicize his results and spur communities to preserve the species through his work with National Geographic and the Belizean non-profit Fragments of Hope.

In recognition of his outstanding scientific achievements, Ben earned the National Oceanographic and Atmospheric Administration’s Hollings Scholarship, the National Geographic Young Explorer Award, the DAAD Undergraduate Scholarship, and the Goldwater Scholarship. He also graduated as valedictorian of the College of Science. But academic and research accomplishments are only a part of Ben’s remarkable story: he is also, according to Marine and Environmental Sciences and Civil and Environmental Engineering Professor Mark Patterson, “a great writer and spoken communicator” as well as a devoted educator who understands community solidarity and collective action to be tools as important as scientific acumen for preserving our oceans.

Through his community engagement and international experiences at Northeastern, Ben came to see how arbitrary categories of nation, race, gender, and class shape the opportunities available to people, including opportunities to learn about and advocate for natural resources. One element of Ben’s response to this inequity has been a long-running dedication to science education, including through tutoring at Boston public schools and inviting local students to learn on campus through the Northeastern Program for Teaching by Undergraduates (NEPTUN). In consultation with his department, Ben already has plans to mentor underrepresented high school students from the Bay Area and offer them internships at Stanford during his graduate studies.

“I have seen smart students over the years,” said Oscar Puebla, the GEOMAR professor with whom Ben studied the Maya hamlet, “but Ben is beyond smart. Ben is brilliant.” The Knight-Hennessy Scholarship seeks students united by their potential for leadership, their belief in positive change, and their humility and kindness—all characteristics that, according to his mentors, distinguished Ben throughout his career at Northeastern. Reflecting on the alignment between Ben’s Northeastern experience and the values of the Knight-Hennessy program, Iacono put it succinctly: “Ben represents Northeastern’s highest aspirations in his unfailing pursuit of excellence in the service of the world.”