Mitchell Gallerstein COS'17 reports from South Africa, where he is studying abroad.

Two weeks ago I went on a peninsula tour that took us to the Cape of Good Hope—the (almost) southernmost tip of Africa and the meeting point for the Atlantic and Indian Oceans. Standing on a 500-foot cliff overlooking this meeting point gave me very conflicting feelings. I was struck by an overwhelming feeling of excitement about getting to experience the world on an entirely different continent—one that could easily be swept out from under my feet as I stood without any barrier between me and the rocks hundreds of feet below.  This moment exemplified what study abroad is about for me. The euphoria and fear of going into the unknown. I chose this location because it seemed different from the type of life I am used to in Boston. Though having been here for this time, I am struck by how similar South Africa is to the USA. South Africa has the highest level of economic inequality in the world. The USA has the highest level of economic inequality in the developed world. South Africa and the US were desegregated 21 and 61 years ago, respectively. The issues facing both countries are surprisingly similar. 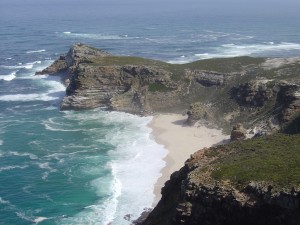 The Cape of Good Hope

Cape Town has an amazing culinary scene, which unexpectedly highlights the inequality I mentioned. On Thursday, some of my new friends and I went to a night market in an old theater downtown. The food all looked incredible and there was a folk band onstage playing American music. After eating an amazing plate of sweet potatoes, roasted vegetables, rice, and pulled pork, I went and got a Nutella brownie. I spent a lot of time there, but it was only towards the end I realized that the market was almost completely made up of white people. The only black people in the room were serving food. Today, our group went to a restaurant called Mzolis, which is located in a black township—where South Africans were forcefully relocated during apartheid. The best way to describe this restaurant is a combination between a butcher shop, restaurant, and club all located on an outdoor patio. The food was served in a gigantic metal tub and everyone ate with their hands. Comparing the food alone gave an interesting picture. The market contained similar food to what we are used to eating, while Mzolis was a very South African experience. Also, because of safety issues in the township, I was not allowed to leave the restaurant during the day in a group. The neighborhood with the market was safe enough to walk around in at night. The juxtaposition of these two experiences highlighted the divide between life for white people and life for black people in South Africa. I look forward to learning more about this issue in the future in order to gain a better understanding of the underlying problems.