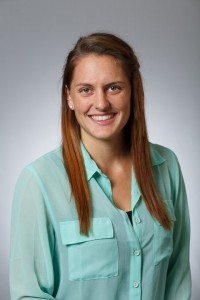 Congratulations to Hannah Bergam, COS’17, who recently earned the Dr. Carl F. Muckenhoupt Scholarship! The Scholarship, which provides support to an undergraduate student majoring in science or math in the College of Science, is designed to recognize students with “a demonstrated interest in aiding the environment.”

According to Bergam, her co-op, research, and volunteer experiences at Northeastern University have allowed her to develop her varied interests, bringing together a passion for helping the environment and aiding children, as well as her skill in computer programming. One of the first research projects that Bergam undertook at Northeastern, supported by a Scholars Independent Research Fellowship, explored the urban heat-island effect in Boston. Working with Professor Matthias Ruth of the Department of Civil and Environmental Engineering, Bergam compared summer temperatures in and around Boston against population demographics most at risk in different Boston neighborhoods.

One of Bergam’s “favorite experiences” from her time at Northeastern has been leading a long-term project on creating more inclusive playgrounds in the city of Boston. Playground Project: INDIGO grew out of a community-based research project supported by the Northeastern University Scholars Program and founded by Grace Schulz. While initially stemming from a desire to renovate a playground in the Mattapan neighborhood, the project quickly adapted to address the broader need for research into what makes an inclusive playground. Different from simply an accessible playground, an inclusive playground is built to accommodate “the needs of children of all abilities,” such as those who might require different types of sensory stimulation or areas for quiet retreat. The members of the project conduct research and survey playgrounds, staying up-to-date on the most inclusive playground equipment and participating in the ongoing renovation process of multiple playgrounds in the Boston area.

Bergam’s experiences on co-op at Northeastern have had an "invaluable impact on both [her] chosen studies and [her] career goals." Working at the energy intelligence companies, PowerAdvocate and EnerNOC, and more recently, at the mobile engagement platform, Localytics, she has learned a lot of skills in areas such as computer programming and analytics that she would not have had the opportunity to develop in class. Bergam hopes to pursue a career that will bring together her interests in environmental issues, urban planning, and computer science.

For now, Bergam is focusing on her next adventure, taking part in a Northeastern Dialogue of Civilizations in Iceland, where she will take two courses in geology, studying the juxtaposition of active volcanoes and glaciers on the island. The experience will likely provide Bergam more opportunity to examine issues of place and space as humans interact with their changing environment.

Bergam uses her multi-faceted interests to build on her scientific studies and apply her talents to real-world issues that reveal a deep desire to protect the environment, just as the Muckenhoupt Scholarship describes. Her work in the city of Boston has already had a profound impact on the opportunities for engagement for young children in the city, and it is likely that her efforts will continue to lead to innovation in environmental research.