John Howard, COE '18 reflects on his experience with the University Scholars Dialogue to Istanbul and Berlin.

On the dialogue to Istanbul and Berlin, I was given a unique opportunity to experience firsthand the culture of two of the most exciting cities in Europe. In addition to having the freedom and ability to go explore the cities on a daily basis, I was able to double down on my cultural immersion by choosing to conduct my research on the street performers of the two cities. While the musicians of Berlin were incredible and easily the most talented on average I have seen anywhere in the world, my experiences conducting fieldwork in Istanbul absolutely floored me as a music lover and as a fascinated observer.

The street music scene in Istanbul centers around Istiklal Street, a pedestrian-only thoroughfare at the heart of the city that attracts over 2 million visitors on an average weekend day. Never have I seen such an incredible density of human life in an open area as what I witnessed on Istiklal Street each evening, especially on Fridays and Saturdays. The street performers were aware of this too, and took up spots along the sides of the street, playing for the vibrant masses strolling up and down the street. At least once a day, I would grab my camera and slowly wander from end to end, stopping at each performer to listen, document, and simply experience the music and the crowds and the environment. 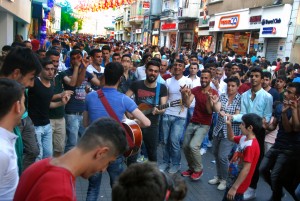 countless hours there while we were in Istanbul, observing, categorizing, and photographing all the different performers. Of everything I witnessed, however, one experience stuck out to me. Part of my research technique was to approach all groups formed in the streets, as with all the noise of the big crowds that was often the best indicator from far off that a street performer was there. One of these particularly large groups was unlike all of the others- a group of twenty or more young adults barely older than myself were holding hands, singing, and dancing together. All of them knew the chants and songs very well, and in which directions to step and when to move their hands in and when to take them out. Every once in a while, one of the dancers would emit a high-pitched holler in cadence with the beat, causing the rest of them to smile and laugh as they sang. Based on the synchronization of their movements, you would be inclined to think that they were practiced performers, but more examination revealed that to only be halfway true- they weren’t performers at all. They were dancing for themselves, for the purpose of dancing. 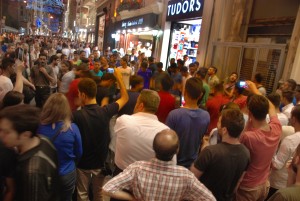 s and later asked several locals about what I had seen, and while none knew exactly, I was universally pointed in the direction of the Kurds, and eventually discovered that it was a traditional Kurdish dance. Reflecting more on this, I began to realize that I was witnessing a very cool and unique phenomenon. Here was a group of local Kurds that had taken to a public space with a simple intention – to express their heritage and have fun doing it. It struck me as an entirely unfamiliar experience – in my experience music and dance in the public space is always a means to try and collect money from crowds, and even more than that, the idea of a young group that could be anywhere else embracing the traditional song and dance as a preferred way to spend a Friday night was beautiful to me. Especially when considering the Kurds’ minority status in Turkey, it inspired me to see a group of people around my age openly embracing and even promoting their cultural identity in perhaps the most visible open space in the entire country. It was even more heartwarming to discover that these very same groups were there dancing exactly a week later and once or twice in the evenings midweek, suggesting that they choose to sing and dance together on a regular basis. I witnessed a lot of other talented musicians playing music and singing over my two weeks there, but the memory of the dancing Kurds in particular really cemented the city of Istanbul as one of the most culturally vibrant places I’ve ever been in my life.