Kyle Roeloffs, COS '19 reflects on his experience with the University Scholars Dialogue to Istanbul and Berlin.

My father sent me off prior to leaving for the dialogue by telling me to “buy me some weird Turkish soccer jersey.”  Since I spent the majority of my time in Istanbul exploring the area of Besiktas and studying that area’s soccer club, I figured that would be as good a choice of a team as any. 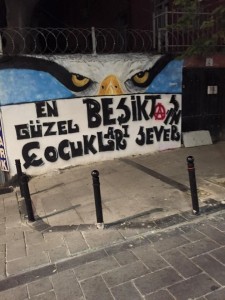 I had seen a couple of stores selling Besiktas apparel all around the neighborhood, but I chose the store near the center of the area, right across the street from two huge murals showing fan support.  The first shows the black and white stripes that make up the home kit of Besiktas while the second depicts the symbolic eagle of the club.  These public works of art are the largest and most complex occurrences of football graffiti that are ever-present in the area.  They make the little shop across the street stand out more amongst a backdrop of small corner stores and restaurants.

As I stepped through the entrance, I was greeted by a cheery, yet heavily accented “Hello!”  The source of this call was the man seated at the back of the store, decked out entirely in black and white Besiktas gear.  I answered back and began to peruse the jerseys that he was selling.  The man, who appeared to be in his mid-thirties, got up and walked towards where I was shopping.  He asked me what I was looking for at the store and how I heard about his beloved team.  I told him about buying a jersey for my brother and dad back home and how I was staying near the neighborhood. 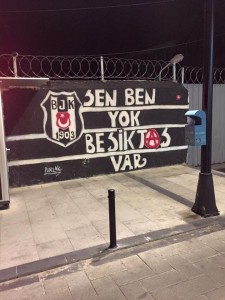 I also spoke to him about being in Istanbul with a school program and how I was studying the local club and the radical, politically active support group of the club, called Carsi.  At this he visibly lit up.  He excitedly informed me that he was an active part of Carsi and that he had been involved for a long time.  I had an extended conversation with him about the group and its activities.  He told me about a morning that the police broke into his home and dragged him out in front of his wife and kids.  He was held in a cell for four days without any information as to what he did wrong and what the police were charging him with.  After being released, he found out that the Carsi organization, of which he was a powerful member, was being charged with attempting a government overthrow.

It was such an interesting conversation to have, and I came out of it with an intense appreciation for this man’s willingness to tell a complete stranger about his story.  Also, it truly exposed some of the police oversteps that we were learning about in lectures but that I hadn’t really seen or heard about outside of that environment.