Boston is a hub of diversity and culture, something that I was acutely aware of when I initially applied to schools here. There is so much to be done and seen, and I can still remember back in the March of 2012, during my first taxi ride through the city, when I looked out of the tinted windows with wide eyes and pledged to myself that Boston was going to become a part of me. Two and a half months into the school year, I’ve had experiences that the small-town California girl in me would not have been able to imagine before coming here. I am so grateful for everything that Northeastern and Boston have been able to offer me, and I anxiously await the new opportunities that seem to unfold before my eyes every single day. 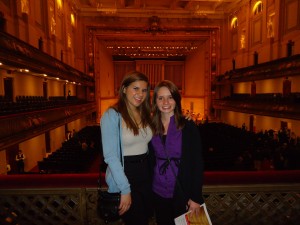 On October 6, 2012, Priscilla Baquerizo and I attended the Boston Symphony Orchestra. The tickets had been a birthday present from her aunt, and she was kind enough to invite me to join her. I was a bit skeptical going in – not only because of the limited non-casual wardrobe that had actually traveled with me from California, but also because I’d never actually listened to classical music live before.  It wasn’t necessarily that I had any preconceived notions, but I was not entirely sure how much I would enjoy the performance.  We were able to hear a handful of spectacular pieces by Tchaikovsky, Bernstein, and Dvorák, and I was floored by how much I loved it. The experience itself was amazing (Symphony Hall is a beautiful building with plenty of history), and the music was beautiful.  For some reason, it never truly clicked that my love for instrumental pieces (tending to be scores from movies, trailers, etc.) would translate to an appreciation for classical music.  I especially loved the “Romeo and Juliet” piece that opened the performance.  Priscilla and I were both surprisingly pleased that we had attended and immediately looked into the College Cards, offering discounts to college students for the remainder of the season.