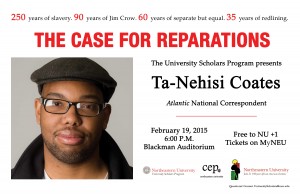 Tickets will be available for free to Northeastern students, faculty and staff through the "My Tickets" feature of MyNEU.

Coates's appearance is part of the Scholars Seminar on Leadership, Research, and Innovation, a semester-long series of events featuring thought leaders and change makers from both inside and outside the university. Future visiting speakers, to which all Northeastern students, faculty, and staff are invited, include Laverne Cox (January 26), Jose Antonio Vargas (March 19), and Naomi Klein (April 16). Check the University Scholars website for more details on future speakers as at the events draw closer.