Northeastern is deeply committed to maintaining its status as a leader in sustainable practices. Since 2007, when the university became a founding member of the American College & University Presidents Climate Commitment, Northeastern has adopted an official Climate Action Plan and won numerous awards for its green initiatives. The Institutional Master Plan is a demonstration of Northeastern’s environmental stewardship and provides the University with a set of principles to guide the development of the campus as a sustainable and healthy environment. 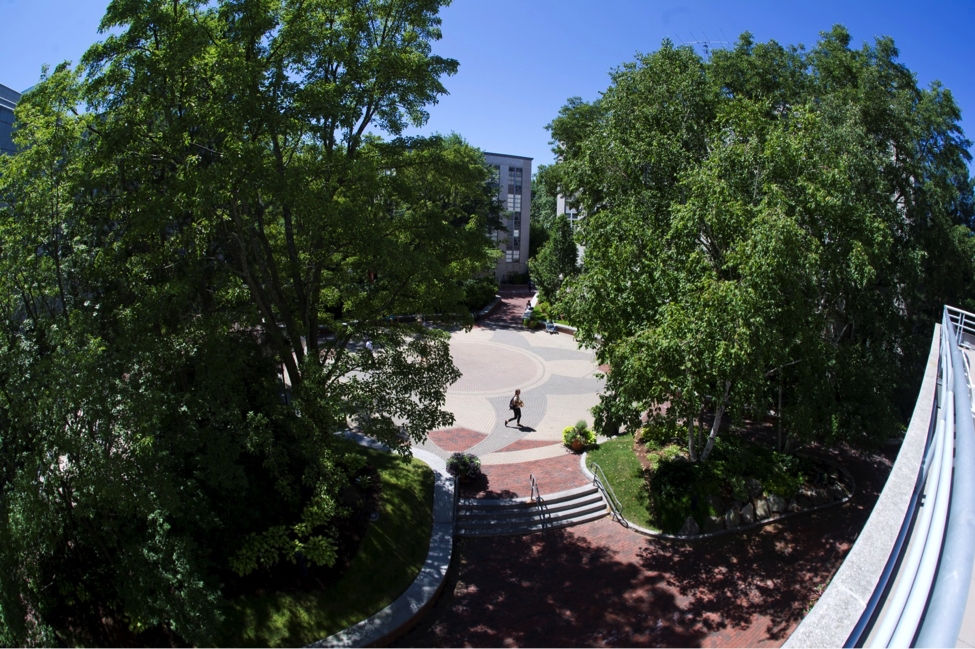 Northeastern shares the City of Boston’s strong commitment to the principles of sustainable development and aims to incorporate a wide variety of sustainable initiatives in all its projects.

Northeastern will work with the Boston Redevelopment Authority and the City of Boston Environment Department to develop, set, and achieve ambitious Environmental Sustainability goals as determined in the Institutional Master Plan in the design of the Proposed Projects, comply with the City’s Green Building Zoning Article 37, collaborate with the Boston Groundwater Trust, and implement the BRA’s Groundwater Conservation Overlay District Article 32.

Northeastern University considers sustainability to be an ongoing process that harnesses the unique talents of students, faculty, staff, and the Northeastern community to develop technological, economic, and environmentally responsible policies and innovations that will balance the needs of the present without sacrificing the needs of future generations.

The University is actively involved in investigating and implementing environmentally responsible initiatives. The University continues to research and implement sustainable technologies and practices such as energy use and efficiency; building re-commissioning; transportation management; sustainable sites and design; recycling and solid waste programs; and stormwater management. The University will continue assessing its options and defining assertive and responsible actions to speed its progress towards environmentally friendly policies, systems and facilities.

Sustainable development will factor into all University decisions and plans. Sustainability will be integrated throughout the planning process for the Northeastern campus, through the following means:  Green Building Design: Climate Resilience, Life-Cycle Flexibility, Environmental Mitigation and New Building

The University endeavors to reduce the level of solid waste generated in construction and daily operations through waste minimization, reuse of materials, and recycling wherever possible. 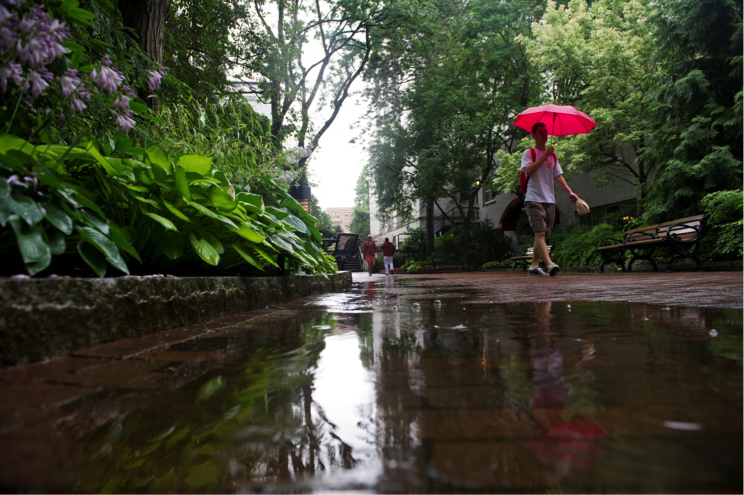 This increased intensification of use of the existing campus site promotes walking and increased use of public transportation, and at the same time increases construction and service-distribution efficiency.

The Institutional Master Plan team worked with the sustainability consultant Transsolar to establish guidelines to mitigate over-shadowing of existing buildings, and to minimize solar gain caused by isolation at low angles on the east and west elevations. Passive solar strategies including orientation, siting and building massing are proposed to minimize energy consumption and improve occupant comfort.

Construction materials and generous floor to ceiling heights will provide buildings that are durable and reusable for many subsequent generations of use, and that will accommodate future updates in building service technology.

The proposed buildings will maximize the potential for natural day-lighting by providing, where possible, buildings with narrower floor plates. This will serve to reduce the need for artificial lighting.

Where possible, rainwater harvesting will be utilized to ensure that non-potable water will be provided by natural systems. Green roofs, groundwater recharge systems and bio swales will act to mitigate the effect of stormwater runoff.

Green roofs will serve to mitigate the ”heat island effect” caused by exposed heat-absorbent surfaces during the summer months and to slow rainwater runoff during rain events, thereby reducing the impact of the buildings on the surrounding micro-climate and water drainage infrastructure. Green roofs improve the insulation characteristics of buildings’ roofs, decreasing requirements for mechanical heating and cooling within. They also provide additional habitats for the local ecosystem and will contribute to the landscape architects’ vision of bringing the natural environment of the Fens into the campus. 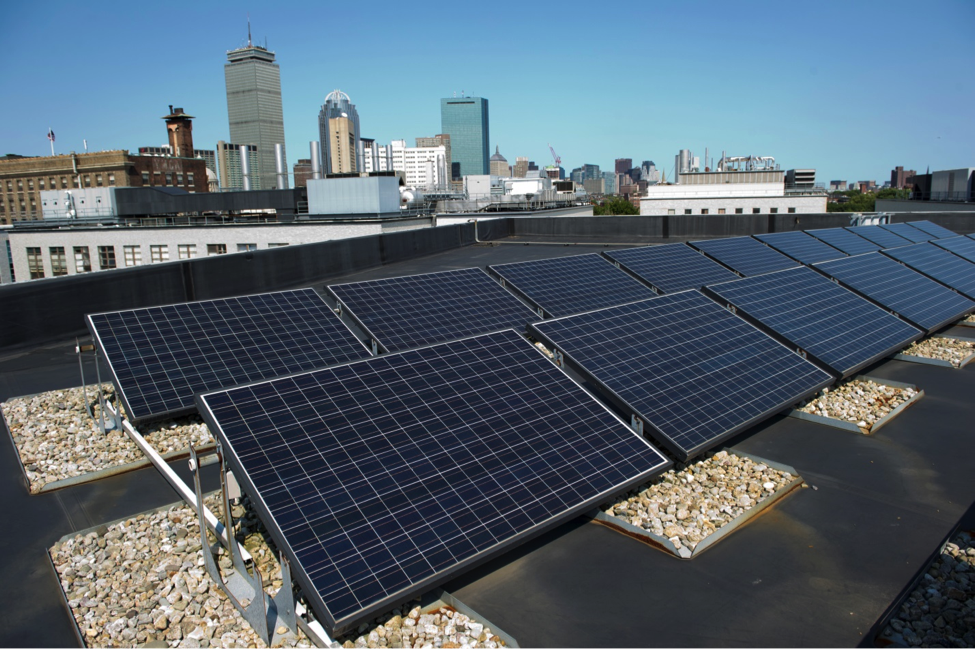 Potential impacts from each of the IMP projects will be presented when the University has selected design teams and finalized a development program. For those projects in excess of 20,000 GSF, reviews will be undertaken in accordance with the requirements of Article 80 of the Zoning Code.

The initial project presented under Article 80 was the ISEC project on Columbus Lot, which was approved at the same time as this IMP in December 2013. The following sections discuss the impact areas to be more fully evaluated in subsequent impact filings with the BRA or other city and state agencies, illustrating how the first IMP Project, the ISEC handles environmental issues.

It is expected that the BRA will review the proposals requiring city review and determine if wind analyses are required. The University will be sensitive in its proposed designs and building massing to ensure that the proposals do not create wind impacts at the pedestrian level that would lead to uncomfortable wind conditions for walking or sitting.

The University will takes steps to ensure that taller buildings proposed minimize new shading on open spaces, sitting areas or pathways throughout the campus. Any new shadows are expected to be confined to properties already owned by the University. Architectural and massing design concepts will be presented that reduce potential shadow impacts.

The proposed IMP projects are not expected to significantly reduce daylight on any off-campus locations. Architectural and massing design concepts will be presented that reduce potential daylight impacts.

Materials to be used in construction of the new projects will be chosen to reduce the potential for solar glare.

Because the structures to be built as part of the IMP are not expected to generate significant increase in vehicular traffic on the Northeastern Campus, it is unlikely that there will be impact on air quality in the area from new traffic. Air quality impacts from enclosed garages that may be constructed will be reviewed during the BRA’s Article 80 review process.

While it is expected that noise will occur during the construction of the IMP projects, construction noise levels will comply with applicable city of Boston and Commonwealth of Massachusetts noise regulations. During the operation of the completed projects, noise levels from HVAC and exhaust equipment will also comply with these standards. More detailed information will be presented in filings in accordance with Article 80 and other regulatory requirements.

The Northeastern campus is located primarily within Zone C, areas of minimal flooding with elevations above the 100-year flood benchmark, according to Federal Emergency Management Agency Flood Insurance Rate Map for the City of Boston. However, Northeastern has experienced some flooding in severe weather. The campus contains no wetlands, although portions of the campus bordering the Fens may be within protected areas.

The Northeastern area north of the MBTA tracks are generally located within the Groundwater Conservation Overlay District, pursuant to Article 32 of the Boston Zoning Code. As appropriate, IMP project filings will include analysis of potential impacts on groundwater and mitigation will be proposed.

As will be outlined in the Construction Management Plans for IMP projects requiring review under Article 80 and City of Boston requirements, appropriate measures will be taken to insure that any hazardous waste typically encountered from construction debris encountered in urban fill soils will be removed to the appropriate landfill site(s) or recycled, as required.

Northeastern is not aware of any rare or endangered species or any ecologically significant plant community which may be affected by the IMP proposed projects.

There are a number of historic resources both individual buildings and historic districts surrounding Northeastern and within the campus which have been identified, listed and mapped in the Northeastern University Preservation Plan completed in 2005. The update to the 2005 Preservation Plan, included here also contains survey forms (Form B) for ten additional historic buildings owned by Northeastern.